You’re walking down one of Gotham City’s many dark alleys, clutching your valuables when you sense a presence behind you. A mugger? Maybe something worse—the city has been suffering through a veritable plague of enhanced criminals, maybe it’s one of those ghoulish guys and gals? Could it be the dreaded Penguin? Maybe you’ll get driven into a fear-driven madness by Scarecrow? You pray it isn’t the most feared of all the city’s enemies…The Joker. Nope, it’s just some guy in a Snowman suit who can produce blue-hued frozen precipitation from his top hat. Phew! Batman deserves a night off anyways. Let’s take a look at the worst villains in comic book history, (then take a look at the worst super heroes!) 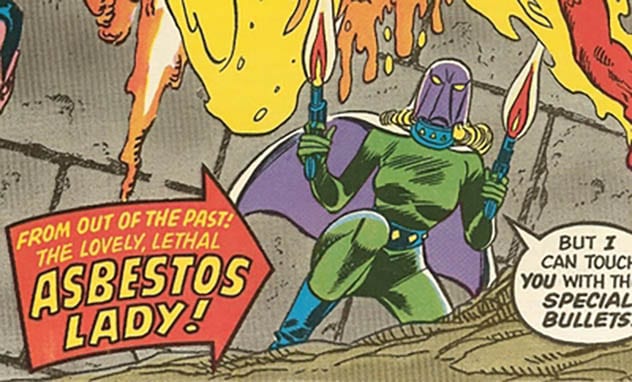 We start off with an, (albeit poorly named), villain who isn’t half bad! She burns, burns, burns but never burns herself. Fire has a weapon is common in both heroes and villains in various comic book universes but it how an individual (mortal/non-super) human avoids becoming a smoky, crispy pile of bones is rarely alluded to. Asbestos Lady addressed this potential plot hole—asbestos-lined suits for her and her minions! Couple of problems though—COPD, asbestosis, ovarian cancer and mesothelioma.

It’s hard to think of a villain who is more ‘of their time’ than Asbestos Lady. ‘Betamax Boy’, perhaps? Or, maybe, a baddie called something racially insensitive like ‘The Mandarin’…oh, wait.[1] 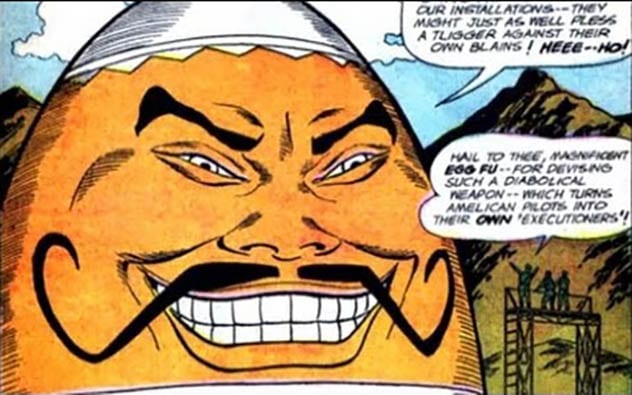 Speaking of good ole’ racial insensitivity—enter, Egg Fu. If Humpty-Dumpty had always seemed a bit weird and unsettling to you, why not add in some casual racism? Perhaps Egg Fu was designed to solve Chairman Mao’s blundering during the ‘Great Leap Forward’. So the ‘Four Pests’ campaign (amongst other missteps) cased the death of tens of millions of people? No problem, let’s all tuck into the biggest omelette mankind has ever seen. Thanks, communism!

This diabolical chicken period looks a lot less anti-Asian nowadays but he still seems to be a giant, cybernetically enhanced egg.[2] 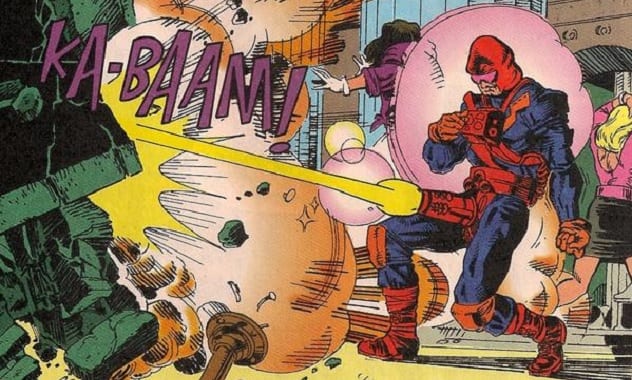 Hey, men, have you ever been told that you aren’t tall enough? Hurts doesn’t it? You do know what people really mean when they say that, right? They’re talking about your junk! I know—doesn’t it make you just want to invent a set of power armour that includes an ‘Inspector Gadget’ style wang-enhancing section below the belt? No? Just this guy, then.[3] 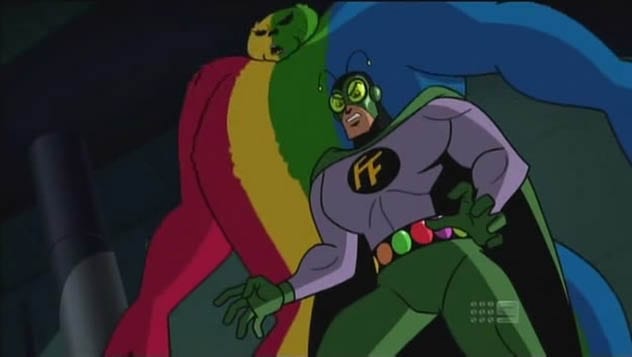 This unimaginatively-named monster combated the bat in a South American republic plagued by a wannabe dictator named Diaz. This evil authoritarian has enlisted the help of a primeval creature born from a volcano that is made from four coloured bands, each giving the monster a power that reflects each hue—blue makes things extra cold, red is capable of making things very hot, yellow…turns things to mist and green, as you would expect, turns enemies into two-dimensional, flattened cut-out versions of themselves. Batman managed to trick this festive beast into using all its powers at once which makes it disintegrate, thus saving the South American nation from its insurgent rebel tormentors, returning the citizenry to living under (probably) their even worse current dictator. Gracias, caped crusader.[4] 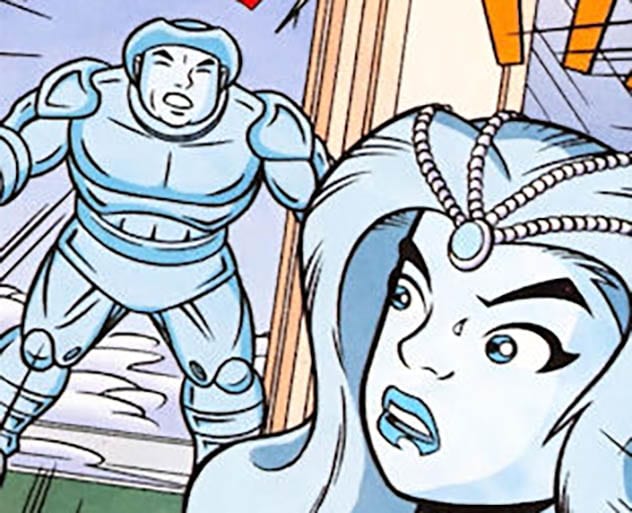 This is not the comic book version of that most terri(ble)fying of movie monsters, Jack Frost, the killer snowman, this is the ever-so-impressive foe of Wonder Woman. His powers and/or abilities? How about a corncob pipe that fires icicles? How about a hat that produces snow, and not just any type of snow, blue snow? Yeah, this dude is lame. How lame, you ask? Try reading this premise from ‘All-new Batman: The Brave and the Bold’ #8 without immediately washing your eyes with acid—Blue Snowman crashes the marriage between Batman and Wonder Woman along with a host of evil-doers which include such formidable foes as Amoeba Man, Angle Man, Crimson Centipede, Fireworks Man, Mouse Man, and Paper-Man. *shudder*[5] 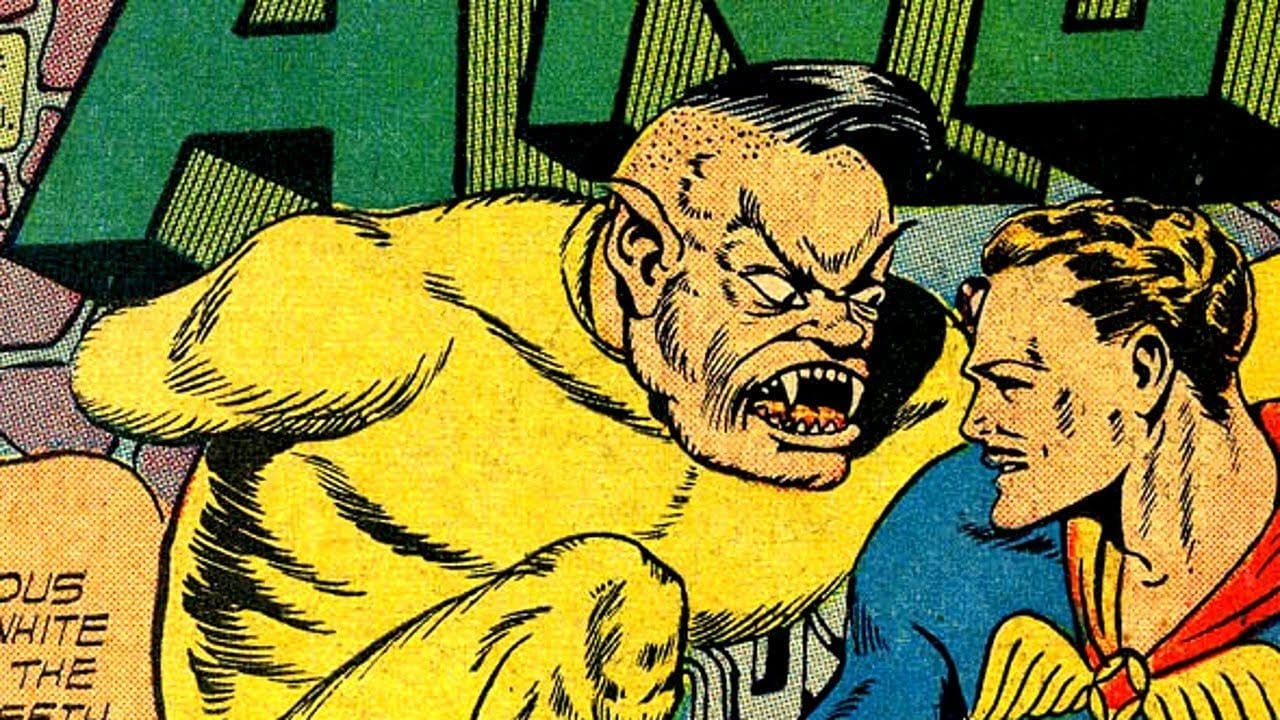 Read the entry title again. Armless. Tiger. Man. And, boy, is he evil! Like many antagonists from this era, he is a Nazi. But not any old jack-booted supremacists, oh no! He has the ferocity of a tiger! And no arms.

Eric Hertz worked in a factory where, because he was probably terrible at his job, both his arms get ripped off by one of the terrible machines. Did he get a fat cheque from the government? Did he file a lawsuit against his company for millions? Nope, he learned how to use his feet and mouth, got his strength enhanced to superhuman levels and embarked on a luddite campaign of wrecking for his Nazi masters. In Wakanda, trying to secure vibranium for the Nazi war effort, The Armless Tiger Man gets shot in the head and sent straight to…Hades, where all dead Nazis go, I guess. In Hades, amongst the Greek Gods, Armless Tiger Man keeps getting his butt kicked by Pluto (uh…that’s Roman Marvel, not Greek), Zeus and Hercules. Guy can’t catch a break.[6] 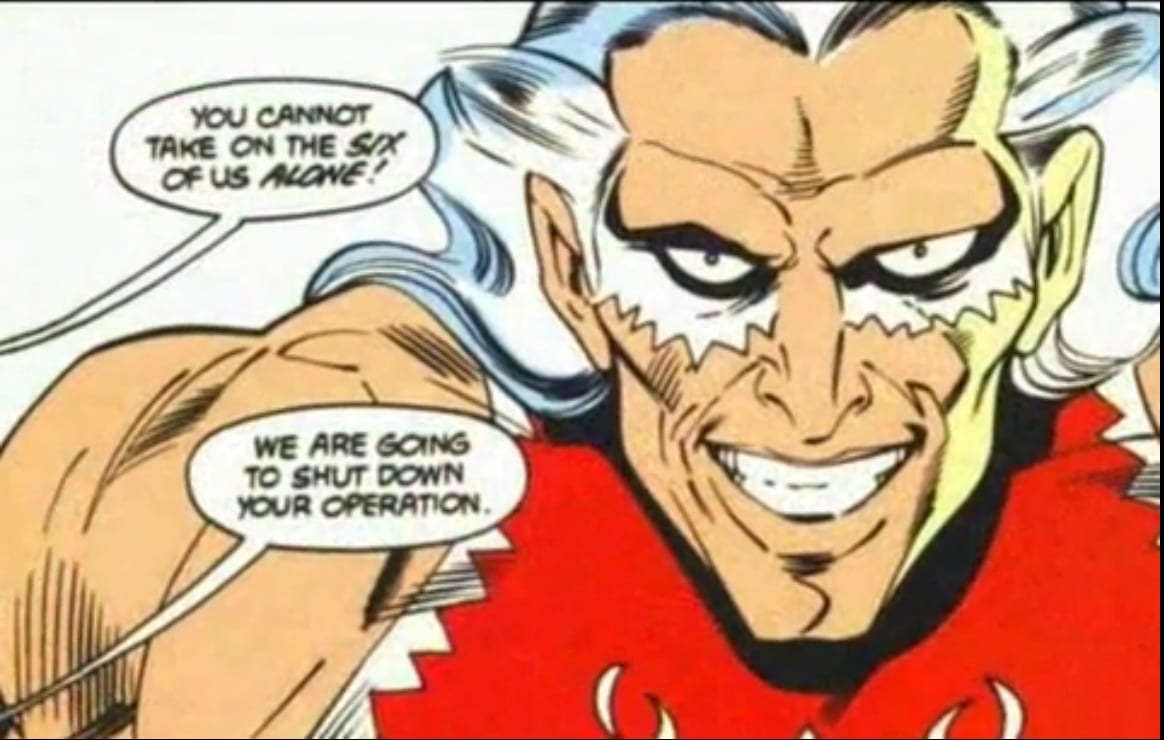 Colombia. Land of Gabriel García Márquez, one of the greatest authors of the 20th century. Land of arepas and patacones and arroz con coco and a whole cuisine that tantalises. Land of outstanding natural beauty, from the Andes to the Amazon. And, of course, land of cocaine-fuelled super villains.

Snowflame’s vital stats are interesting—his special abilities are mostly the norm (superhuman strength, pyrokinesis, increased speed), but one power is quite unique—cocaine touch. This dude is so wired on the old marching powder that touching him is enough to get wired. His main weakness? Well, he’s addicted to cocaine…seriously addicted. His equipment? Grappling hooks? Hi-tech weaponry? Robot howler monkeys? Nope, it’s cocaine. COCAINE!!!! Aaaargh! This tweaking tormentor pledges his allegiance to, you guessed it, cocaine, proving to be the narcotic’s servant and living embodiment of its, um, will (?) Thank goodness he gets defeated by the ‘New Guardians’, after which, I assume, they had a real party over his corpse—waste not want not (probably not though, he’s back in a new web comic!)[7] 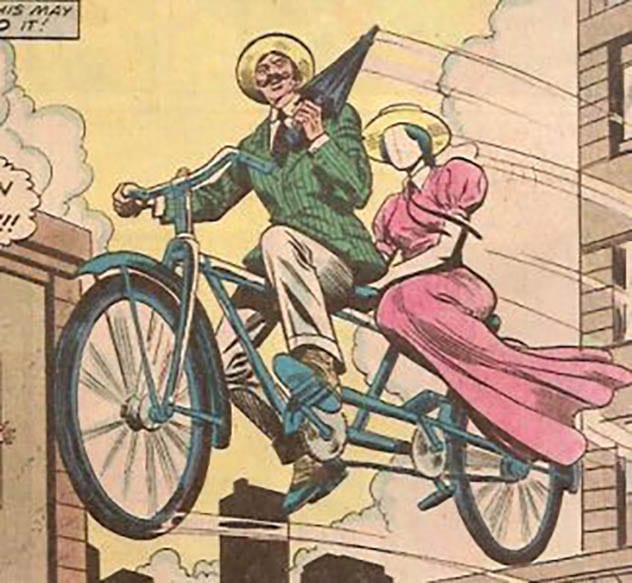 Who doesn’t love a pun? What’s that, almost everyone hates puns? Somebody should have mentioned that to the Marvel writers back in the 80’s. One panel even addresses this; regarding his marvellous moniker a character quips “…calls himself…ready for this? Turner D Century! Corny…Real corny”. Yeah no ****, Sherlock!

But his cheesy name is the least lame thing about him—that would be his raison d’être. Turner’s dad was a chauffeur to a stuffy millionaire in San Francisco at the turn of the century (19th to 20th). When Turner, originally named Clifford F Michaels, is orphaned he is taken in by the millionaire and raised as his adopted son. What does he learn from his surrogate dad? To hate the way good manners have gone out f fashion. Turner goes on a rampage using his flamethrower umbrella and flying bicycle and a magical horn that has the power to kill people under the age of 65…how rude! At least this insufferable evil-doer foreshadowed the rise of hipsters—a 1900’s inspired, moustachioed loser from San Francisco who utilises modernised versions of outdated tech? Freaky stuff.[8] 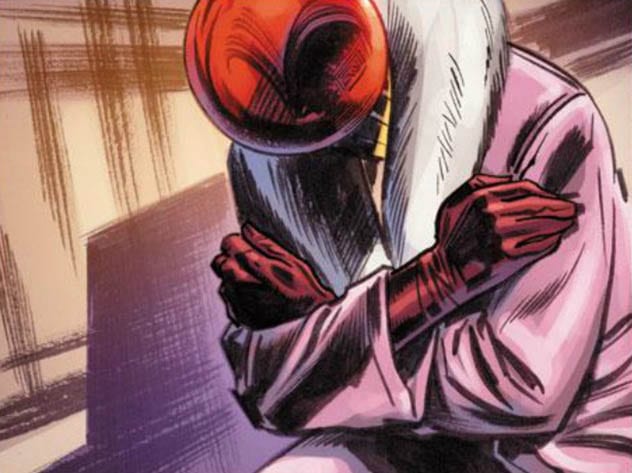 Some say the human brain is like a powerful computer network. Nobody says the face is like a powerful computer network. This ‘classic’ foe has replaced her head with, ugh, ‘a mass of organic circuitry’ inside a small, plastic head. Her mission? Get the rest of the human race to adopt a small, plastic head. Chilling. A special one shot series called ‘ I heart Marvel’ celebrating Valentine’s Day, 2006 included Ruby Thursday in a relationship with fellow bad guy ‘Answer’. Seriously.[9] 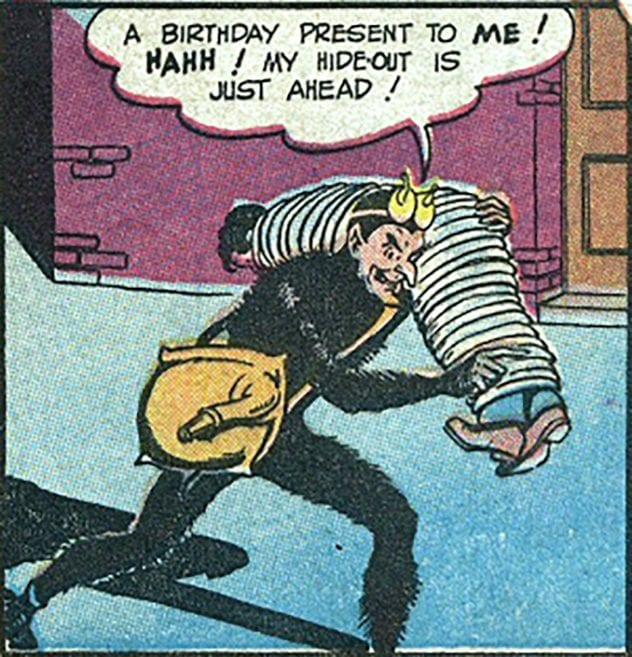 ‘But, wait, Spiderman isn’t a villain! Spiderman doesn’t suck, how dare you!” Ok, OK, settle down Mary Jane. This is Spider Man, not Spiderman, the subtle gap is all important. One is a wise-cracking web-slinger and saviour of New York city on many an occasion, beloved by many. This entry is about the other, far less impressive comic creation.

He has the same tech-enhanced abilities as Peter Parker’s alter ego, but that suit! He must be baking. What is it, gorilla fur? If looking like a giant tarantula was his goal, he may want to consider covering his wicked-witch-from-Snow-White-face. Without a mask he looks like he should be holding up a sign for ‘Web-tacular Hotdogs at Jimmy’s! 4 for $5’[10]