If there’s one thing we learned from self-isolating, it’s how much we depend on our hairstylists. Men and women alike are scrambling to tame shagginess, split ends, and gray roots. Months of quarantine have provided a valid excuse for unkempt tresses, but quarantine can’t be blamed for some of the worst hairstyles in modern history. 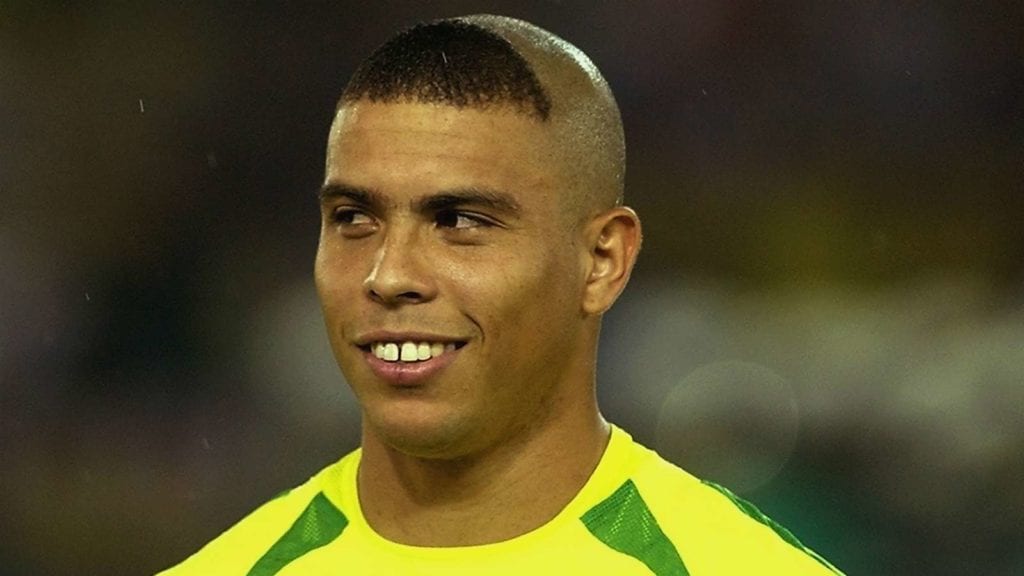 A recent Dazed Beauty post suggested that the DIY buzz cut is “isolation’s biggest hair trend.”[1] With countless possible modifications, the buzz cut is an entire category of hairstyles. And its success relies heavily on the hair type and head shape of its bearer. But there is one particular variety that will never flatter, no matter how perfect one’s hair and head: the fringed buzz cut.

This trending style is a buzz cut with baby bangs. FashionBean.com described the fringed ‘do as “one part Chess Club president, two parts Nazi skinhead–100 percent dreadful.” While there are some not-so-unfortunate versions of this style, there are far more disastrous ones. Just take a look at three-time FIFA World Player of the Year Ronaldo.[2]

Now, if the wearer of the fringed buzz cut decided to let the shaved portion catch up with the bangs, he’d have something just as appalling (and our first Honorable Mention): the caesar. Sure, a Roman emperor can get away with wearing tiny cropped bangs, but no other grown man should attempt to do so. The caesar cut, inspired by Julius himself, is tragic. Take Mark Zuckerberg, for example. Dude can afford the world’s best hairstylist, but it looks like he’s opting to let his 4-year-old daughter cut his hair.[3] 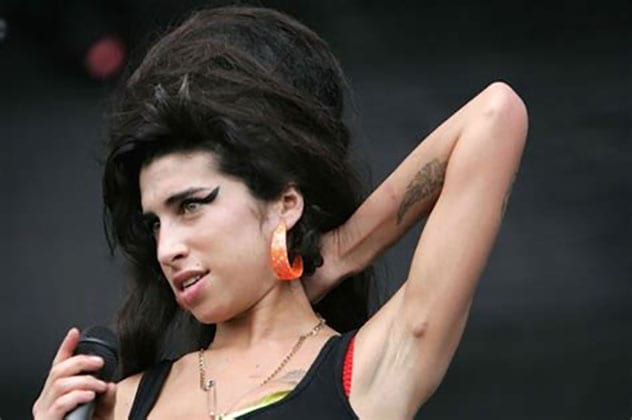 It’s been 60 years since hairstylist Margaret Vinci Heldt created the beehive. In the 1960s, the hairdo was flaunted by Priscilla Presley, Brigette Bardot, Barbra Streisand, and scores of other high-profile celebrities. The Ronettes boasted some of the tallest beehives of the era.

Heldt was tasked with developing a hairstyle that differed from the demure ‘dos of the 1950s. “[Modern Salon magazine] called me and they said, ‘Margaret, hairstyling has gone dead; there’s nothing exciting,” Heldt said in a 2014 interview. “We have the pageboy, the flip, the upsweep like the French twist, but nothing is happening around the top of the head.’”

Heldt drew her inspiration from the fez, which was popularized by Jackie Kennedy. “I always would look at that little hat and say, ‘Someday, I’m going to create a hairstyle that would fit under the hat, and when you take the hat off, the hairstyle would be there,’” she said. The resulting style was enormous, however, and likely didn’t fit into any such hat. (Today, *avoiding* hat head is typically the goal, as explained below).

The beehive was named after Heldt accessorized the updo with a small pin in the shape of a bee. More recently, beehives have been sported by Marge Simpson, Adele, and Amy Winehouse, who said, “The more insecure I feel, the bigger my hair has to be.”[4] 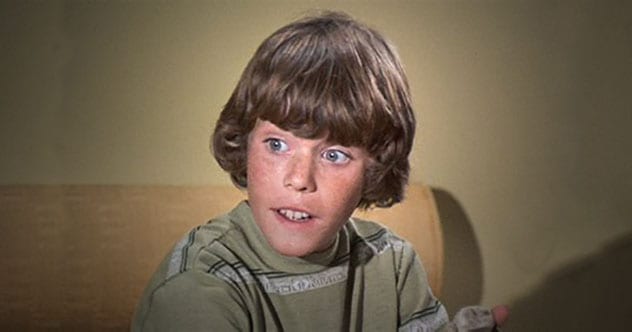 For athletes, bikers, and others who wear helmets, “helmet hair” can be a serious problem. Repeat: It’s a *problem*–one that has resulted in countless products and how-to tutorials for preventing it. Why, then, have both men and women intentionally embraced the look?

As its name implies, helmet hair looks like the bearer is wearing a helmet. It’s round, smooth, and terribly unflattering to every face shape. Urban Dictionary snarkily describes it as “a haircut that forms a perfect ‘helmet’ shape around the head itself. Many times, this can be accomplished by a horrible haircut and lack of caring in the morning tossed with a side of being a boner. This non-trendy look is usually seen on people with the name ‘Mike.’”[5]

Women in the 1950s and 1960s pumped up volume on their bouffants to achieve the helmet look. The style could be teased into shape and remain that way for an entire week.[6]

In the 1970s, boys and men were the ones sporting helmet-shaped ‘dos. (Think Bobby Brady, Liberace, and all of the Brylcreem models.) Today, thankfully, the style has all but disappeared.

Honorable Mention: Bobby Brady wasn’t the only one of the Bunch with helmet hair. TV mom Carol Brady, who started the series with a reasonably sized bouffant, later sported one of the sitcom world’s most iconic hairstyles. She created her own 70s-popular shag with helmet hair on top and a mullet on the bottom. 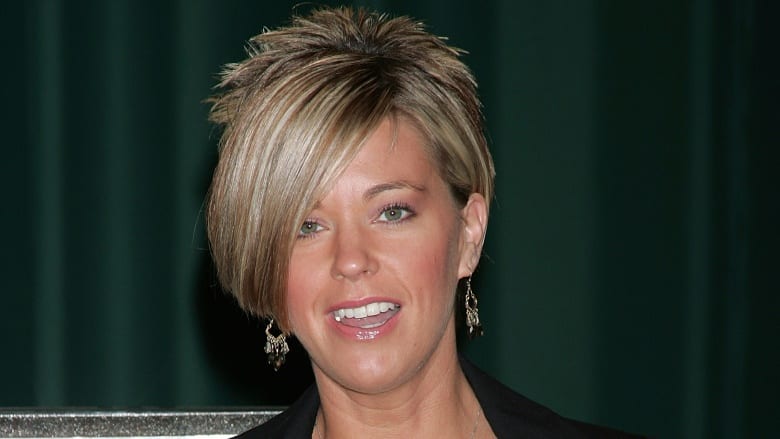 Kate Gosselin of TLC’s Jon and Kate Plus 8 fame took it on the chin for a lot of public choices: her parenting (and coparenting) style, her less-than-stellar Dancing With the Stars appearance, and her decision to document her post-divorce dating life in a reality TV show called Kate Plus Date.

But one of the famous mother’s most infamous choices was that of her hairstyle. The Karen, also known as the “Gosselin,” is an asymmetrical coif that has since become synonymous with Can-I-Speak-To-Your-Manager types. The much-imitated style was long and smooth in the front, short and spiky on top, and shaved in the back–three not-so-great haircuts in one. To make matters even worse, the celeb opted for harsh frosty highlights that added to the cringiness. Fun fact: Gosselin ditched the hairstyle in 2010, but Justin Bieber resurrected it in 2015. (It didn’t look any better on him.)[7]

Oh, and while we’re talking about unfortunate highlights, let’s not forget Terrible Hairstyle Honorable Mention “Frosted Tips.” For some reason, young men in the late 1990s/early 2000s thought it’d be a good idea to bleach just the tips of their short, spiky hair. We’re all glad that Aaron Carter, Justin Timberlake, and Guy Fieri made only short-term commitments to this style mistake. 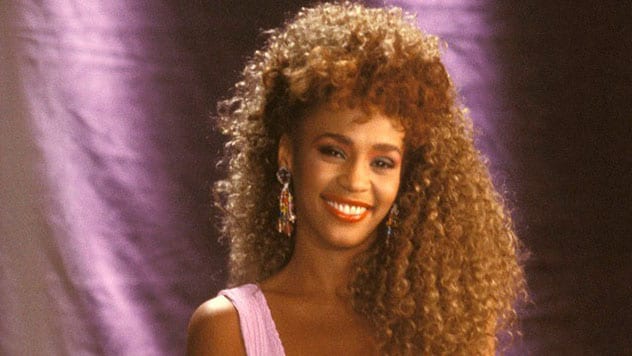 The most popular hairstyles of the 1980s and early 1990s defied gravity and put a hole in the ozone layer. For females of all ages, it was mall hair: permed or crimped locks and stiff, sky-high bangs locked into place with Aqua Net. Combs might be used for teasing, but hairbrushes weren’t needed at all. Janet Jackson, Stevie Nicks, and Whitney Houston wore mall hair. So did the Facts of Life and Full House girls. As with the beehive and helmet hair, achieving the greatest height and volume was the style goal.[8]

The guys also turned up the volume–on their guitars as well as their hair. Twisted Sister, Cinderella, and Motley Crue were just some of the metal groups known as “hair bands.” (And, to be fair, there were female hair-metal artists, too: Vixen, Precious Metal, and Lita Ford, to name a few.) 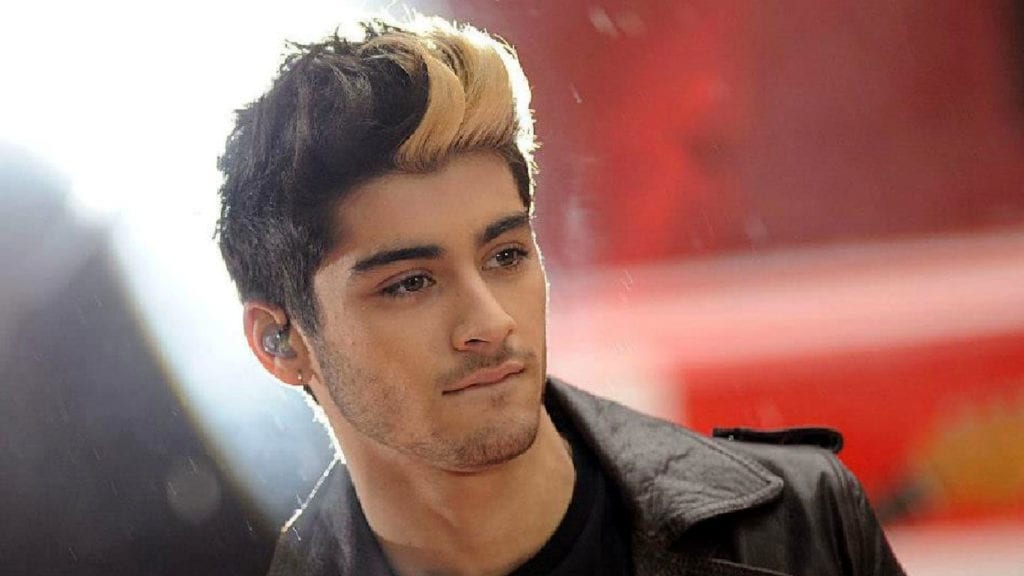 The pompadour was named after Madame de Pompadour, a mistress of King Louis XV, even though she herself never sported such a style. The pompadour generally describes hair that is swept away from the face and worn high over the forehead. The trend was first popular among women, then men, and then women until the 1950s and early 1960s when men claimed the style as their own and renamed it the quiff.

The mid-century quiffs worn by the likes of Elvis, Little Richard, and Johnny Cash were moderate and fashionable. But, as with any hairdo over time, it became less flattering when styled to the extreme (picture Jimmy Neutron, Teddy Boys, and Cosmo Kramer).

David Beckham types modernized the quiff by making it less perfect. The smooth, precise pouf was replaced with an edgier tousled look. And there are plenty of other variations as well: the psychobilly quiff, the side-parted quiff, the textured quiff, and the undercut quiff, to name just a few. One research study showed that women selected the quiff as one of the sexiest men’s hairstyles. (Of 2,000 females surveyed, 28 percent said they’d swipe right on a man sporting a quiff.)[9]

In keeping with history, women are getting back into the game. Voluminous pompadours have been seen in recent years on Alicia Keys, Natalie Portman, Gwen Stefani, and Janelle Monae.[10] 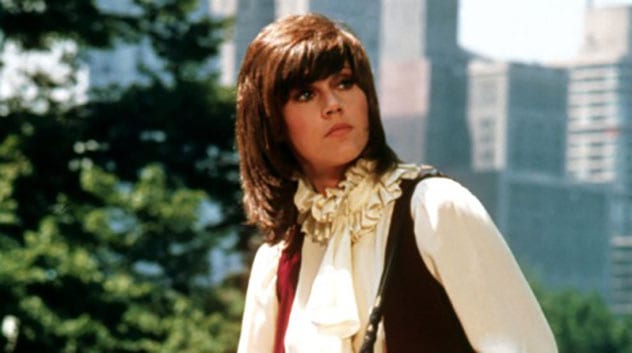 For Jane Fonda, 1970 was a big year. It began with her taking home the Best Actress Oscar for Klute, and it ended with her arrest for suspected drug trafficking. But the big story surrounding both events was Fonda’s hair. The actress, experiencing her “first hair epiphany,” ditched her long blonde locks for what she felt was a more-empowered style. The iconic klute resembled the haircut a preschool girl might give herself the first time she finds herself alone with scissors. Part bob, part shag, it featured full, blunt bangs, face-framing “sideburns,” and choppy lengths at the neck.[11]

The klute was an extreme example of the shag. Full on time and with lots of face-framing layer, it was a unisex style that celebrities like Rod Stewart, David Cassidy, and Mackenzie Phillips loved. 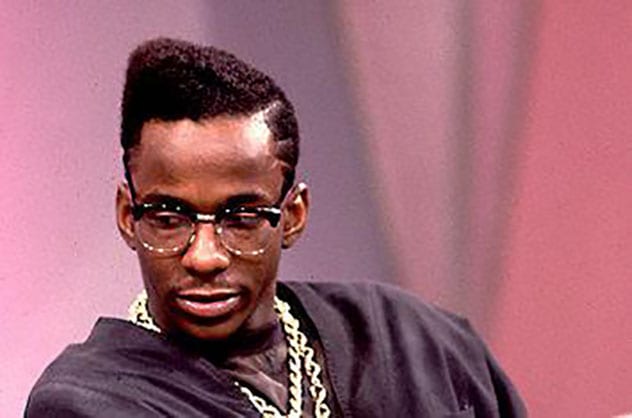 The green, clay animation figure Gumby has an angled, asymmetrical head. And it was in his honor that an infamous 1990s hairstyle took its name. Bobby Brown debuted the Gumby in a 1989 music video, and fans were quick to replicate it.[13]

But the Gumby was actually a mistake. Brown’s barber mistakenly cut off half of the singer’s high-top fade hairdo. Brown embraced the sloped style and made it famous. Decades later, the Gumby still makes appearances by women and men alike.

Grace Jones frequently added a steep angle to her sky-high fades, and singer Pink sported the Gumby in a variety of colors. Oscar-winning actress Lupita Nyong’o and The Walking Dead’s Danai Gurira presented their own versions of the Gumby. Romanian footballer Steliano Filip showed off his asymmetrical hair at the Euros 2016. And actor Arlen Escarpata, who played Bobby Brown in the film Whitney, wore the Gumby even when he wasn’t portraying the singer. 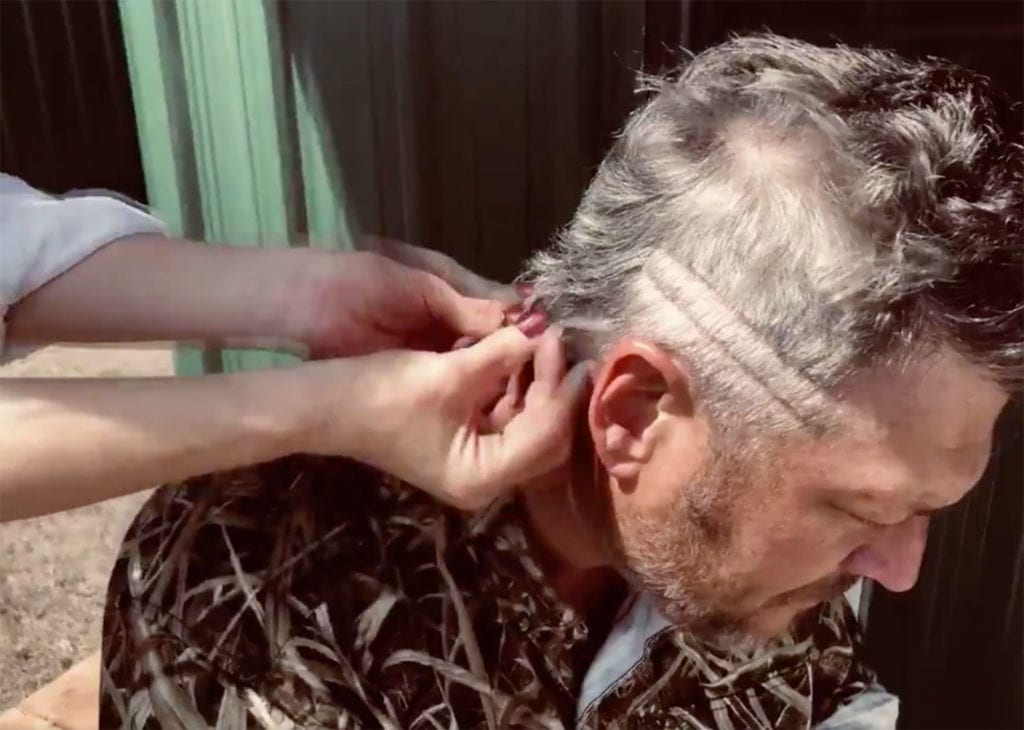 What is unfortunately making a comeback is the atrocious mullet. There are hipster mullets, side-part mullets, pompadour mullets, and fade mullets. Jared Leto himself has sported at least a dozen variations of the iconic hairstyle.[14] And all have the same basic foundation: business in the front; party in the back.

Maybe Joe Exotic (aka Tiger King) is to blame for the mullet resurgence. The Tiger King inspired Gwen Stefani to clip Blake Shelton’s hair into this nightmarish style.[15] And the women who’ve opted for this unfortunate ‘do have fared no better: Do a web search for “Miley Cyrus mullet” and “Scarlett Johansson mullet” to see for yourself.

Famous mullet bearers over the years have included Andre Agassi, David Bowie, Joan Jett, Bono, “Joe Dirt,” and Dog the Bounty Hunter.[16] But perhaps the worst version of the mullet was worn by Florence Henderson as Carol Brady, matriarch of The Brady Bunch. “I was the mother with the mullet,” she told ABC News. “I just thought it was the chicest thing!”[17] 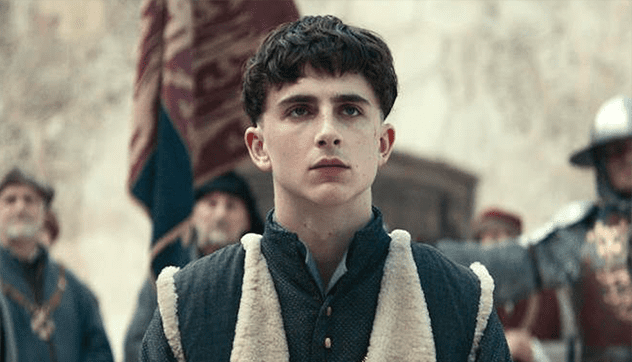 Sporting a classic bowl cut, the Three Stooges’ Moe was a hoot. And the world laughed hysterically when Dumb and Dumber’s Lloyd Christmas donned a similar ‘do. But many adults can recall the days when they themselves sported the incredibly unflattering style–days when they weren’t laughing one bit. School yearbooks are filled with photos of children whose parents regarded the bowl cut as a rite of passage. And so many of these children then grew up to style-torture their own children in the very same way.[18]

In the fall of 2019, style mags decided that the bowl cut could be cool again. Just modify the cut with a deep side part, some highlights, or shaved sides.[19] After all, Timothee Chalamet donned one for his role in Netflix’s The King. Charlize Theron, Rihanna, and Zendaya rocked edgy versions of the cut on the red carpet. But it’s worth noting that these are celebs who are blessed with spectacular bone structure. The average Joe/Jo will look more like Moe than their famous inspiration. (Case in point: William “Roddie” Bryan Jr., who was recently charged with murder for filming the killing of Ahmaud Arbery.)[20]