The thrill of searching through thrift shops and flea markets is that you never know what you will find. Chances are that you will find something that catches your eye for a couple of bucks and go home happy. Of course part of the allure is that you might grab a bargain. One person’s trash is another person’s treasure after all. Sometimes that trash really is treasure.

Here are ten things found at flea markets that were secretly worth a fortune. 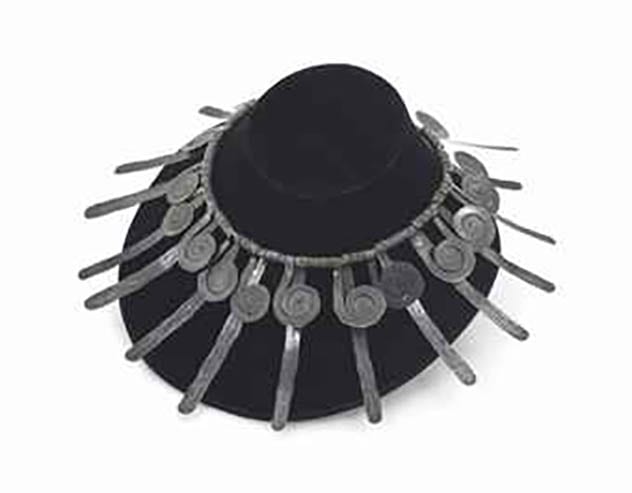 Alexander Calder was a 20th century American sculptor from a family of famous artists. His wire and metal mobile sculptures can be found in galleries and museums across the world. As well as paintings, prints, and a range of other art forms Calder also turned his hand to jewellery.

His rings, necklaces, and earrings were usually made of brass and steel. They were not commercial items and he usually made them specifically as gifts for his artistic friends. Joan Miro got a ring, Peggy Guggenheim received earrings, and Georgia O’Keefe was given a Calder broach. When a piece of Calder jewellery turns up at auction you can expect it to make big bucks.

Norma Ifill got a great bargain then when she picked up a necklace for just $15 at a Brooklyn flea market. Once the Alexander Calder estate authenticated it the necklace made $267,750 at auction.[1] 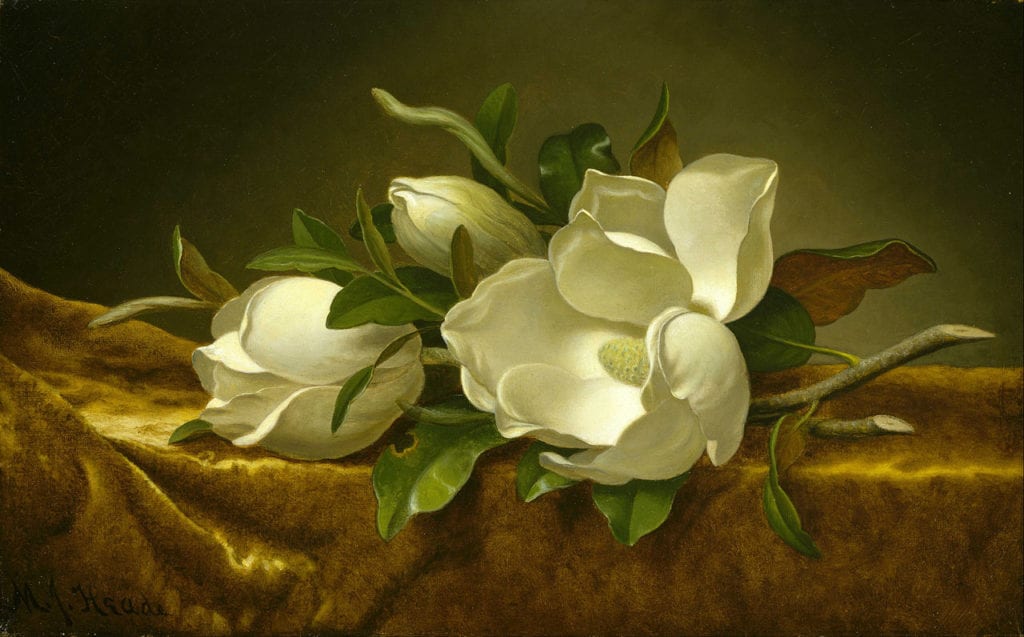 The art usually found at rummage sales is either bad, creepy, or a reproduction. When a man from Wisconsin found a charming little painting of some flowers for a low price he snapped it up. He had a pressing need for the picture too – he used it to cover up an annoying hole in his wall. One day while playing an art based game he recognised a painting similar to the one on his wall. Contacting a museum its value was realised and it subsequently sold for $1.25 million.

Oddly this was not the first time a Meade painting was picked up for a bargain. “Two Magnolias on Blue Plush” was bought for just $29 but later sold for $882,500. One person was lucky enough to get two Heade paintings for just $100 at an estate sale. The larger of the two, “Magnolia Blossoms on Blue Velvet,” was auctioned for $937,500.

If you live in the United States and happen to have a painting of flowers resting on fabric it might just be worth getting it valued.[2] 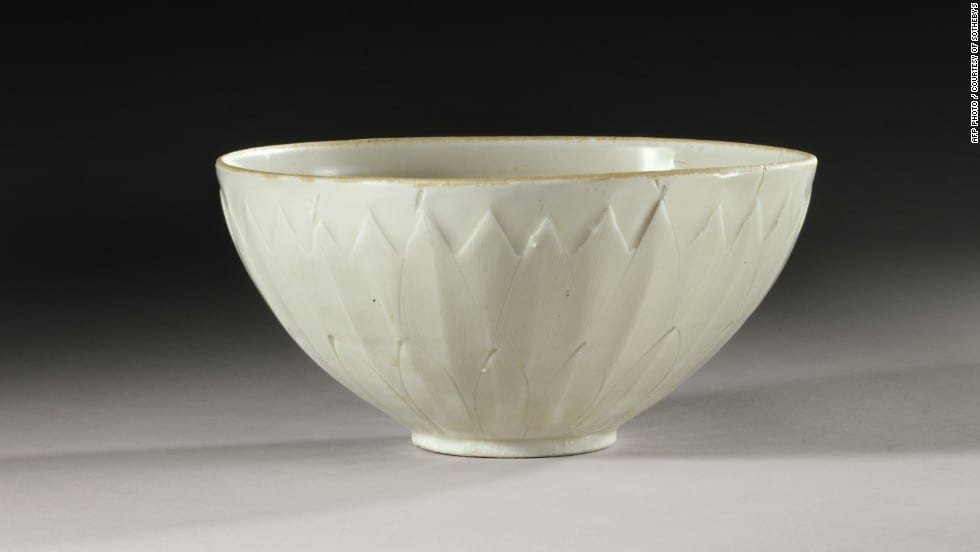 Lots of the stuff found in thrift shops will have ‘Made in China’ stamped somewhere on them. One Chinese item that did not turned out to be 1000 years old and worth more than you might expect.

Picked up for just $3 the white bowl is not immediately striking. It is only five inches in diameter and plain white in colour. It had a pretty pattern on the inside though that attracted the buyer enough to part with their dollar bills. The owners put the bowl on display in their living room and at any moment they might have knocked it over. Still, they would only have lost $3.

After a while however the owners became interested in the history of their bowl and took it to an auction house. After realising it was from the Song dynasty of Chinese history and one of the most valuable types of ceramic produced at the time – Ding pottery.[3] 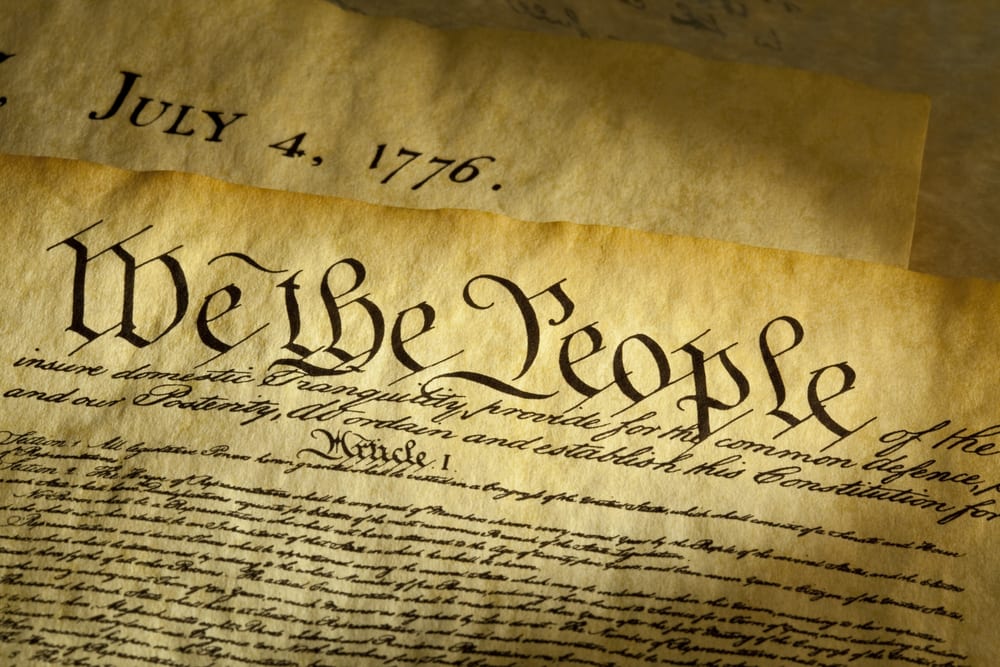 There is no more uniquely American document than the Declaration of Independence. Children learn about it, politicians refer to it, and Nicolas Cage tries to steal it in movies. You might expect then that all the copies of it are located and kept in secure locations. Yet only a few of the copies originally sent out in 1776 are still known to exist.

In 1989 an old painting was bought for $4 at a flea market. The painting however was not what the buyer was after, he liked the look of the wooden frame. When he pried the painting from the frame something slipped out of the back – a Declaration of Independence. In pristine condition the document was taken to an auction house who immediately realised what it might be worth.

The copy that was found was one of just 24 known to exist that were printed for July 4th, 1776 in Philadelphia. When sold at Sotheby’s the surprise find made $2.42 million.[4] 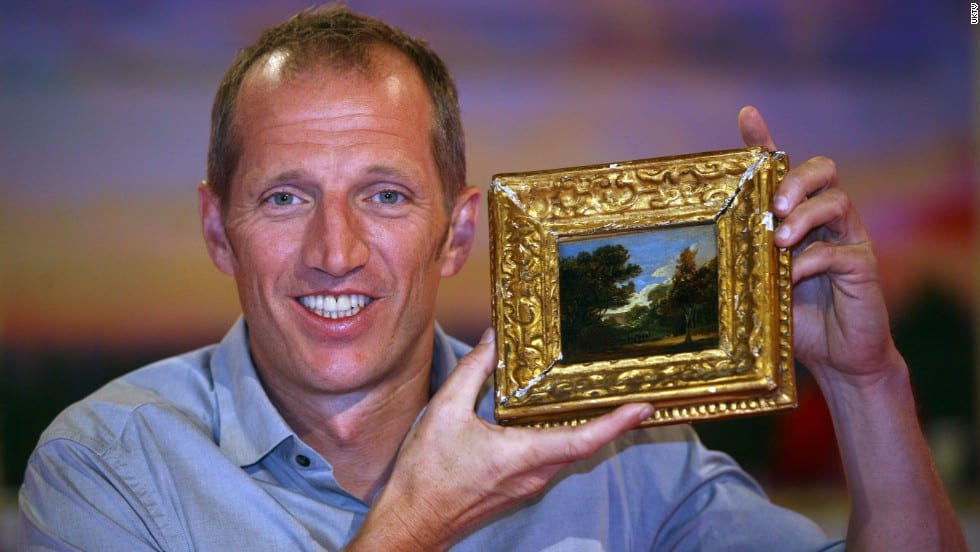 John Constable is one of Britain’s most famous painters. His ‘The Hay Wain’ is often voted as the nation’s favourite paintings. When one person bought a job lot of trinkets for £30 he never expected that one of them would turn out to be a painting by Constable.

One of the paintings found in his collection was no bigger than a postcard but was in a large and gilded frame. When the original buyer gave the picture to his son Robert Darvell he decided to investigate the little masterpiece. A faint signature on the back of the painting was the only clue that it might be more than it seemed.

Turning the painting over to a British television show that investigates whether art works are real or forgeries it took a year of study to confirm the painting was by John Constable. With that attribution the painting suddenly leapt up in value – experts suggested a valuation of £250,000.[5] 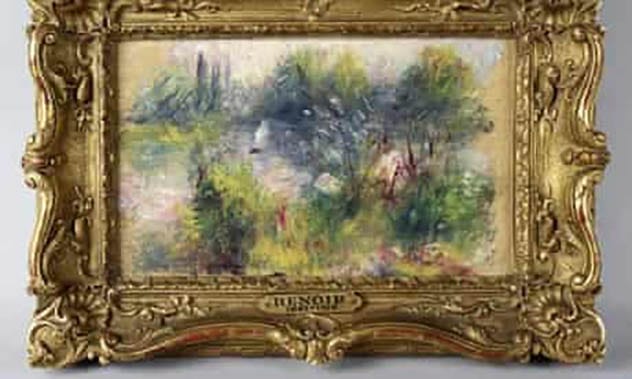 Mixed boxes at junk sales generally contain stuff that could not be sold on their own. One buyer took a chance though and came out with a valuable Impressionist painting. Usually the clues to whether a painting is worth a lot can be quite subtle but in this case they were written right on the frame.

It was only after the painting was bought for $7 that the new owner spotted the name on the frame – Renoir. Of course you can’t just trust everything written on a frame so the owner looked at a note on the back referring a gallery. By checking the number on the note against a catalogue the owner found a picture that looked exactly like the one she bought.

‘Paysage Bords de Seine,’ as Renoir called the painting, dates from 1879 but had not been known to the art world since 1926. With its authenticity confirmed it is thought to be worth at least $75,000.[6] 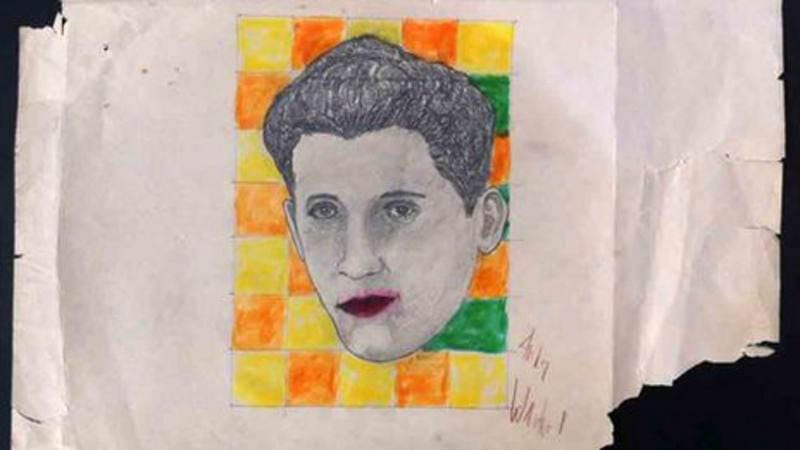 If you learn one thing from this article it is that you should always take a peek behind the frame of any paintings you pick up in a thrift shop. When Andy Fields bought 5 paintings for $5 in Las Vegas he already thought he had got a bargain. It was only when he reframed them that he discovered a sketch hidden behind one of them.

A colourful face was staring back at Fields and there was a subtle clue as to who the artist might have been – the name Andy Warhol. It is now known that the sketch is of 1930s singer Rudy Vallee and was done when Warhol was just ten years old. The bright colours already show some of the themes Warhol would adopt in his later artworks.

Though Fields does not want to sell the work yet some experts think it could be worth up to $2 million. Andy Warhol’s brother on the other hand considers the work a fake. The picture went up for sale on eBay for £1.25 million.[7] 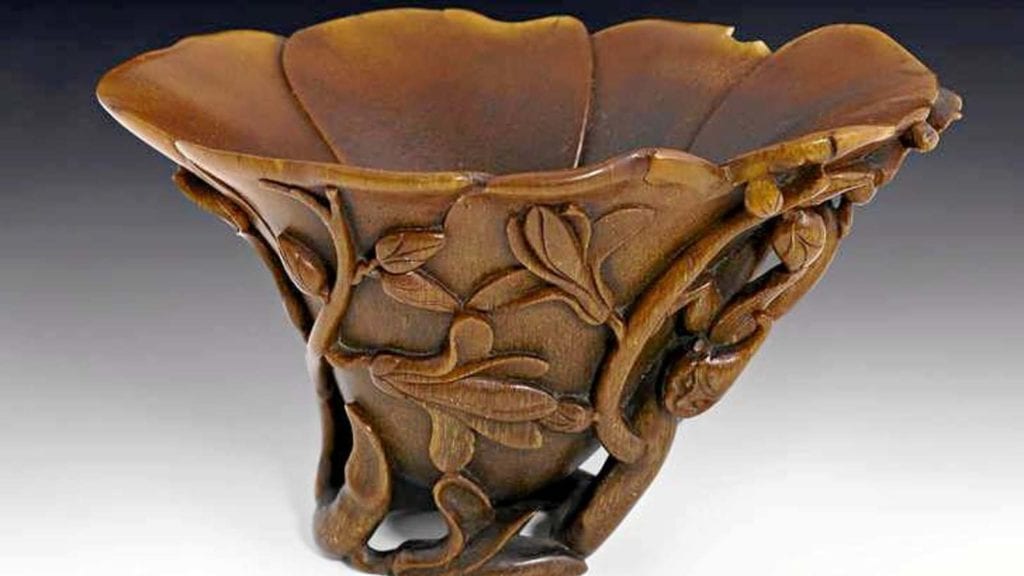 For $4 you would not expect a cup to be made from anything other than the cheapest plastics. One intricately decorated cup picked up in an Australian charity shop looked like particularly stained plastic at that. But when the cup was examined by experts it was realised that it was carved from rhino hand and was a rare Chinese libation cup.

Libation cups in China were often carved from rhino horn and were given to scholars who had done especially well in examinations. The cup would have been used at communal and special events. The one picked up for a few bucks in a charity shop was decorated with magnolia flowers and dated from the 17th century. 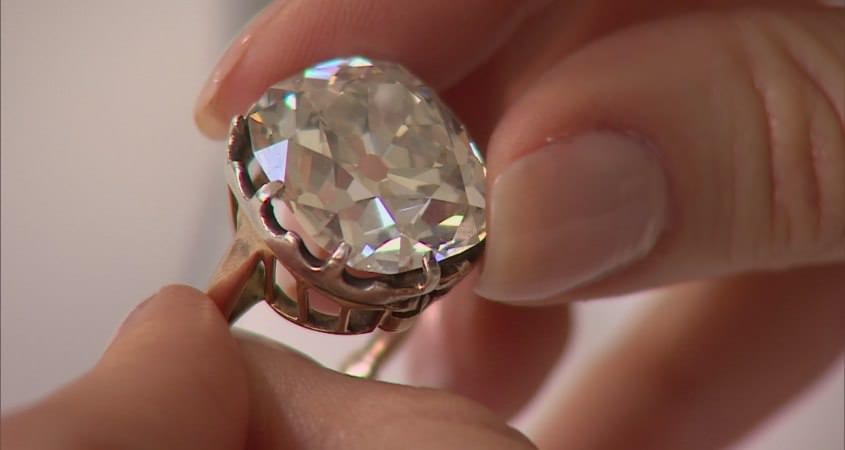 All that glitters at a car boot sale is not gold. Boxes piled high with jewellery are a common sight at yard sales but it is usually a safe bet that none have any gold or diamonds in them. When one person saw a ring with a large stone in the middle they assumed it was just a chunk of glass. They paid around £10 ($13) for it and enjoyed the ring as a piece of costume jewellery.

Now known as the Tenner Ring for its price the owner wore it as she went about her daily tasks. It was only after thirty years of enjoying her ring that she suspected it might be real. An auction house confirmed that the stone in the ring was actually a large and important diamond cut in the 19th century. In total the diamond weighed in at 26.27 carats.

If you go to a flea market it is not likely that you will end up spending $14,000. One dealer in scrap gold however was there looking for objects he could melt down and sell off for their weight in gold. When he spotted a highly decorated egg with a hefty amount of gold in it he was prepared to pay a hefty price for it. He almost lost the real value of his investment however when he nearly melted down a Fabergé Egg.

Karl Fabergé was one of the most famous jewellers in 19th century Russia. Each Easter he was tasked with producing gifts for the Russian Imperial family. Often these took the form of elaborately jewelled and decorated golden eggs. After the Russian Revolution this collection of eggs was scattered across the world.

The one found at the flea market was probably made for Czar Alexander III to give to the Empress Maria Feodorovna in 1887. The last time it had been sold was in 1964 for just over $2000. When the egg was reappraised after its discovery it was valued at as much as $33 million.[10]