For most people, the answer would be one or two. One of those photos will probably be the famous Blue Marble, which was shot by Apollo 17 astronauts in 1972. However, the popular Blue Marble is just one of the few breathtaking photos of the earth out there. We have ten more here, the majority of which you’ve never seen before.

10 Photo of the Earth from Saturn 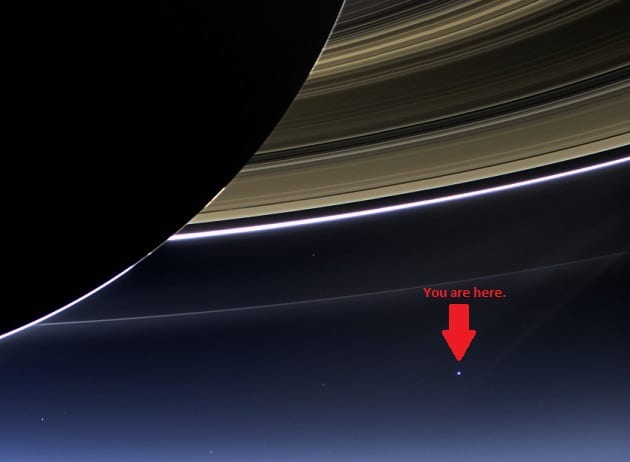 On 19 July 2019, NASA’s Cassini space probe shot a breathtaking photo of earth from Saturn. The photo shows part of Saturn and its rings up close with the Earth appearing as a small dot in the distance. The moon is beside the Earth but is barely visible. NASA named the photo “The Day the Earth Smiled”.

The Day the Earth Smiled is considered one of the best photos of earth. It turned out perfect because Saturn blocked the sun, which would have cast shadows on Cassini’s field of view and destroyed what would’ve been a perfect shot. Despite its popularity, this photo is just one of the many photos Cassini shot from Saturn.

9 Farthest photo of Earth from space 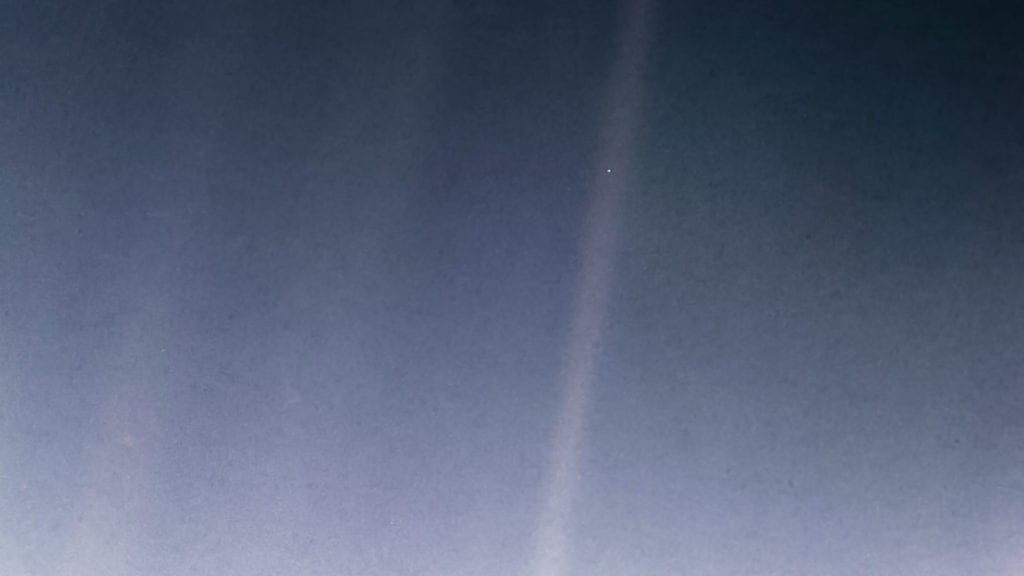 What’s the farthest photo ever taken of planet Earth? That’s the Pale Blue Dot, which was shot by NASA‘s Voyager 1 space probe on 14 February 1990. The photo shows the Earth as a very tiny dot in the upper half of a ray of sunlight that runs from the top to the bottom of the photo.

Voyager 1 was 3.7 billion miles away from Earth at the time it shot that photo. That’s beyond the orbit of every planet in our solar system including Pluto. To put that into perspective, the photo arrived Earth on 1 May 1990, two-and-a-half months after it was shot.

The Pale Blue Dot is one of 60 photographs Voyager 1 shot around the same time. The probe also took photos of Venus, Jupiter, Uranus and Neptune. It didn’t take a photo of Mercury because the light emitted by the planet was overwhelmed by the brighter light from the sun. Mars was blocked by sunlight and Pluto was too small, dark and distant to be captured.

Talking about Voyager 1, the space probe is now in an area called interstellar space. That’s the region where our Sun’s gravitational pull is almost non-existent. In one sentence, Voyager 1 is no longer in our solar system. We shouldn’t expect any more photos from it either since it turned its cameras off right after taking those photos.[2]

8 Photo of the Earth rising from the moon

On Christmas Eve 1968, the three-man crew of Apollo 8 became the first humans to travel to the moon. They did not land on the moon but only orbited round it before returning to Earth. However, their flight would have a lasting effect, particularly on the founding of environmental activism.

Environmentalism wasn’t really a thing until Apollo 8 crewman, Astronaut William Anders shot a colored photograph of the Earth rising from the moon. The upper half of the Earth was bright blue while the lower half was pitch black, as if it were nonexistent. The dry, sunbaked surface of the moon is visible in the foreground.

That photo was named Earthrise even though it isn’t the first photo of the Earth rising from the moon.[3] That honor belongs to a similar photo shot two years earlier. The photographer wasn’t a human but the Lunar Orbiter 1, a space probe NASA deployed to study the moon.

The 1966 Earthrise photo looks like Ander’s Earthrise except that it was grainy and shot in black-and-white. Little wonder it didn’t have the same effect as Ander’s clearer and colored photo. On 13 November 2008, NASA released a high-resolution photo it created from the 1966 Earthrise. The updated photo looks better even though it still lacks color.[4]

7 Photo of a crescent-like Earth 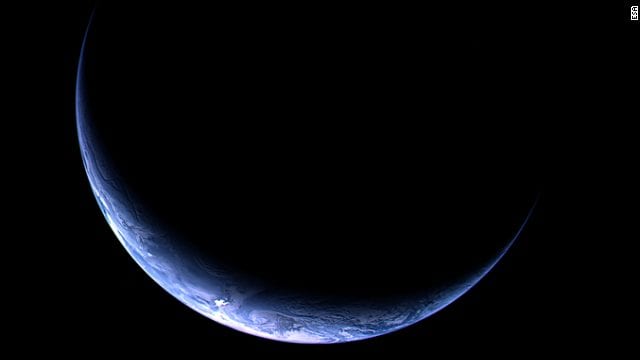 The beautiful photo you see up there was shot by the European Space Agency’s (ESA) Rosetta space probe in 2009. It isn’t an edited photo of the moon or some earth-like planet. It’s the Earth. The entire planet is completely blacked out save for the South Pole, which retains Earth’s distinctive blue color.

Rosetta was prepping to attempt a landing on Comet 67P/Churyumov-Gerasimenko at the time it took the photo. However, it first needed to make three flybys past Earth to generate enough velocity to intercept the comet. It took the photo during its third flyby.

6 First photo of the Earth 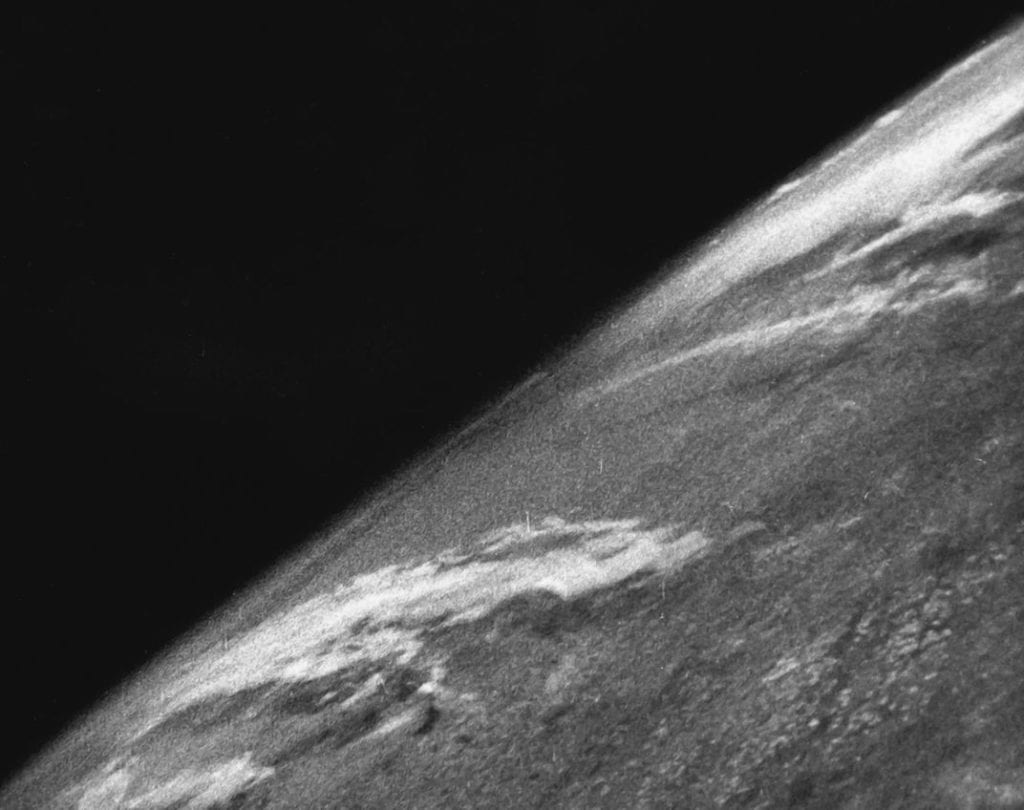 The first photo of the Earth was shot on 24 October 1946 and you wouldn’t believe what we used to shoot that photo. It wasn’t a space probe, satellite or astronauts in a spacecraft. It was a missile. A Nazi missile.

That missile was the infamous V-2 (Vengeance Weapon 2). The Nazis developed the missile during World War II and fired lots of it at their primary rival, the British. However, they still had many unused missiles lying around at the time they were defeated.

The US military transported those missiles to the White Sands Missile Range in New Mexico where some researchers attached a camera to one of them to capture the first photo of space. The photo was shot in black-and-white and shows a part of the Earth with some streaks of white clouds against the dark space.[5]

5 First photo of the Earth and moon 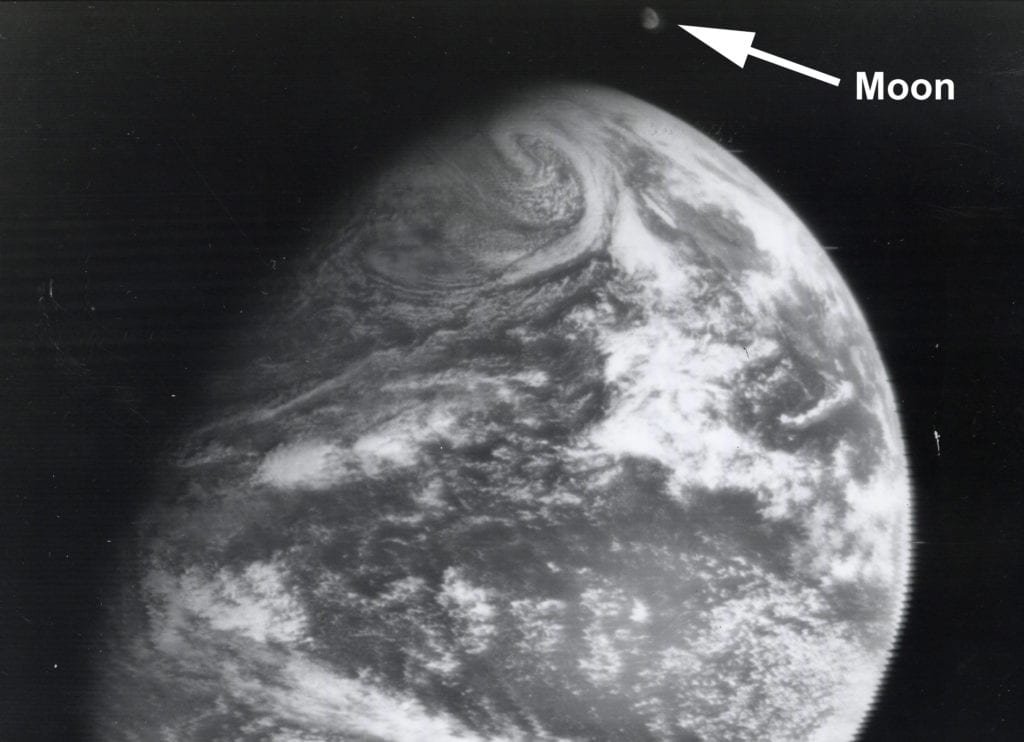 On 22 December 1966, the NASA Applications Technology Satellite 1 (ATS-1) did what no human, satellite or space probe had ever done. It took a photograph of the Earth and moon together. In that photo, we can see part of the Earth in the foreground with the full moon in the background.

4 Photo of planets Earth and Venus from Mars 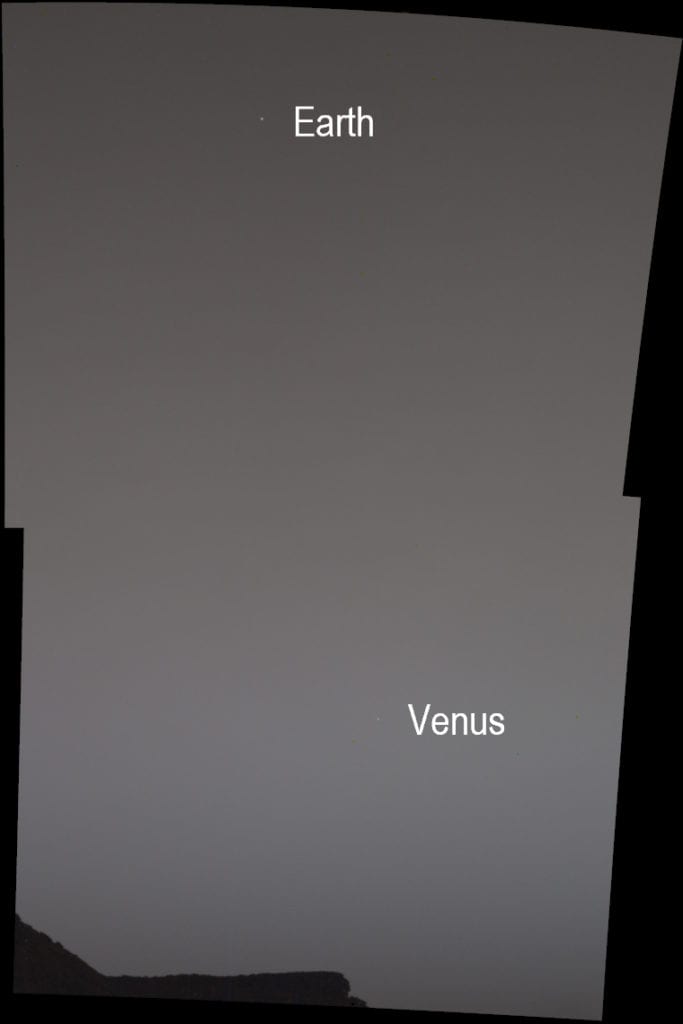 It’s not every time we get to see a photo of Earth from Mars. Thanks to the doggedness of the Mars Curiosity rover, which is still kicking six years past its planned two-year lifespan, we know what the Earth looks like from the surface of Mars.

In mid-2020, Curiosity pointed its camera at the Martian sky and shot two photos, one of Earth and the other of Venus. Its operators here on Earth merged both photos together to create a single photo of planets Earth and Venus.

That photo isn’t detailed since both planets appear as overtly bright dots against the night sky. Talking about brightness, can you guess why Earth and Venus were very bright even though the stars are almost invincible?

It’s because Mars atmosphere was very dusty at the time the photo was shot. The dust particles in the air reflected the light from the sun, causing the sky to become overtly bright. The result is that only the nearest and brightest things appear bright.[7]

3 Photo of the Earth and Moon from Mercury 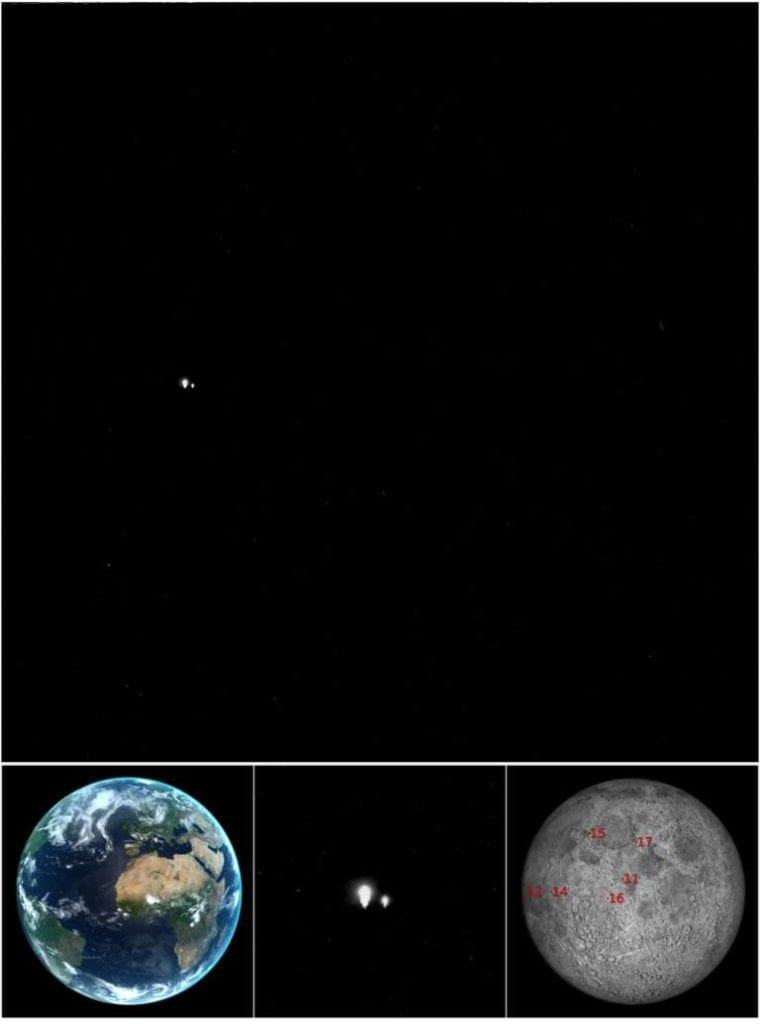 NASA sent MESSENGER to Mercury to find small satellites that may be orbiting the planet. Considering the small size of the objects it was searching for, the probe needs to aim its cameras at the target area for some time before taking a photo.

Photographers call this overexposure and the idea is to allow the cameras capture as much light as possible from an object. That’s the only way the cameras can detect small elusive objects that would have remained unseen. The Earth and the moon would have been no larger than a pixel if the probe had shot the photo right after aiming its camera.[8]

2 First full photo of the Earth 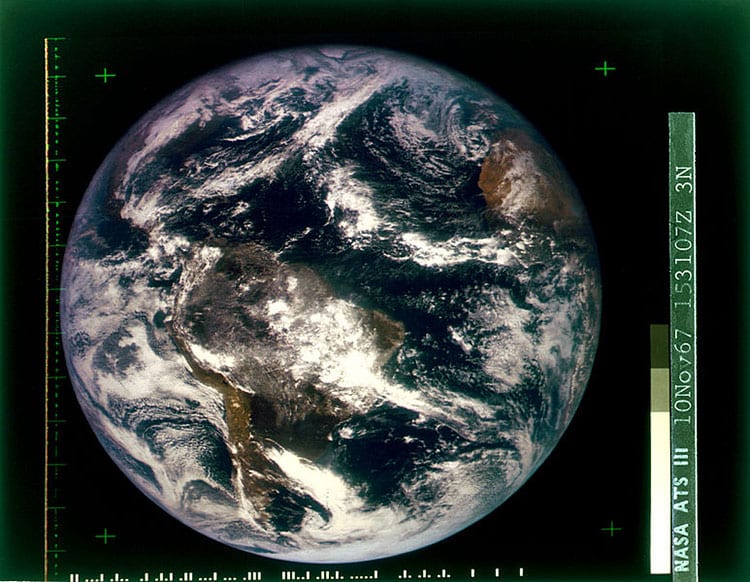 The first was shot by NASA’s ATS-3 experimental weather and communications satellite in November 1967. It’s unclear why the 1967 Blue Marble (as it is now called) is not as popular as the one that came after it. It’s probably because its colors are a bit duller.[9]

1 The Last full photo of the Earth 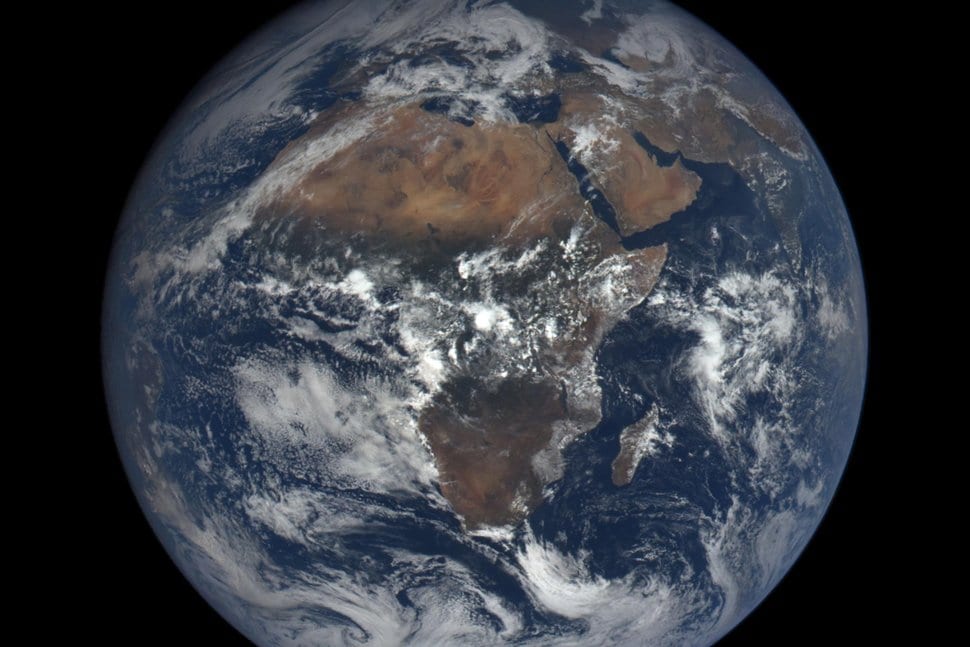 Trouble began in 1998 when Vice president Al Gore revealed NASA was planning to launch a satellite to take a full photo of the Earth. Republicans opposed the program and nicknamed the satellite Goresat, a pun on Al Gore’s name. Both parties remained in disagreement until George W. Bush became president in 2000.

NASA mothballed the project instead since it was clear that the Bush administration was unwilling to fund it. Development only resumed when Barack Obama became president in 2008. The satellite was launched a few years later and it took the photo in 2015.[10]