Dairy on the supermarket shelf is deceptively well-behaved. In other parts of the world, it initiates enormous fires and bizarre experiments. From yogurt that comes from space or somebody’s private regions to cheese raised on music, researchers have no limits when testing the capabilities of dairy.

This world is also remarkably competitive. There are ugly fights about the word “milk,” and the margarine war was just weird. Dairy replacements also get strange—think in the direction of cockroach milk that might solve world hunger. 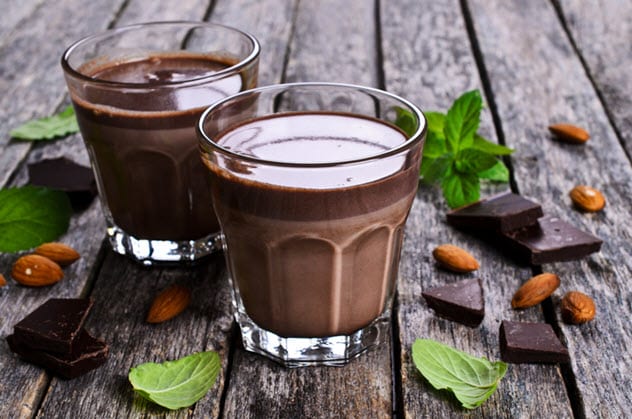 Every year, lunchrooms in New York City serve 60 million cartons of chocolate milk. That is not even counting the sales from supermarkets, cafeterias, or vending machines.

According to Britain’s Natural History Museum, one man invented the popular drink. Named Sir Hans Sloane, he was a botanist from Ireland. In the early 1700s, he worked in Jamaica and shuddered when the locals offered him cocoa. He found the beverage “nauseous” and mixed it with milk. The result was palatable enough to take back to England, and his name went down in history as the inventor of chocolate milk.

However, this is not accurate. Historian Jame Delbougo noted that the Jamaicans boiled a brew from cacao, milk, and cinnamon as early as 1494. This spicy version is good enough to give the title to Jamaica.[1]

There is a chance that the first inventors could be more ancient. After all, chocolate’s earliest mention dates to 350 BC and it is difficult to believe that nobody ever considered adding it to milk.

9 The Definition Of Milk 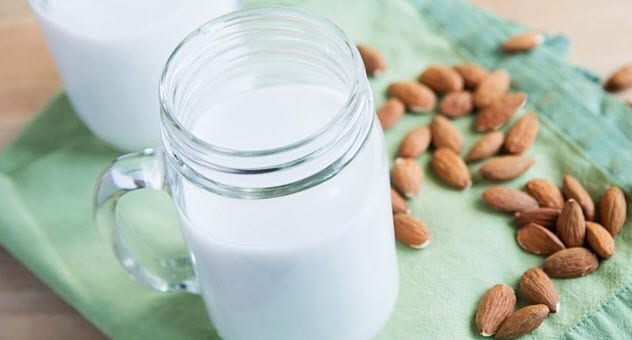 The milk industry got crabby in 2018. Those who sold products made from animal milk did not appreciate the word being attached to milk substitutes. Thus, they went to the US Food and Drug Administration (FDA). The FDA agreed that “milk” cannot be a plant-based liquid. Furthermore, such products using the term are misleading, although most customers know soy milk comes from beans and not goats.

The war gets weirder. If the National Milk Producers Federation (NMPF) has its way, it could force the FDA to ban the word “milk” from being used with all nondairy products that mimic the real thing.

The pretend ice creams and milk are not a plot to overthrow the power of cows. Plenty of people love dairy products but are allergic to them. Soy milk and similar alternatives also allow those with lactose intolerance or a vegan lifestyle to enjoy dairy.

However, the NMPF may have a point with the claim that the substitutes are trying to hijack the healthy image of real milk. After all, “nut juice” does not have the same nutritious ring as coconut milk or almond milk.[2] 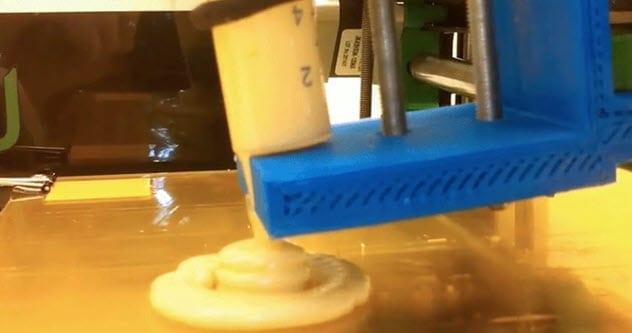 People love to 3-D print stuff. It was only a matter of time before somebody said, “Hey, can we do this with cheese?” 3-D printing involves squeezing a material, like gel or paste, through a nozzle to shape an object. The ability of cheese to go from solid to pliable and then to a solid again made it a perfect candidate.

Recently, scientists found that processed cheese worked best. The reason was likely because the method to make regular processed cheese is similar to 3-D printing. Both mix and mold ingredients into a new shape. The team liquefied the processed cheese at 75 degrees Celsius (167 °F) for several minutes and then squished the molten dairy out through the syringe using different speeds.

The results were compared to processed cheese made the regular way. The 3-D-printed cheese was darker for some reason but up to 49 percent softer. Its solid state was springier and, when melted at the same temperature as regular processed cheese, a lot gooier.[3]

Unfortunately, the samples were too small to taste. But there is no reason why the flavor should not stay the same. 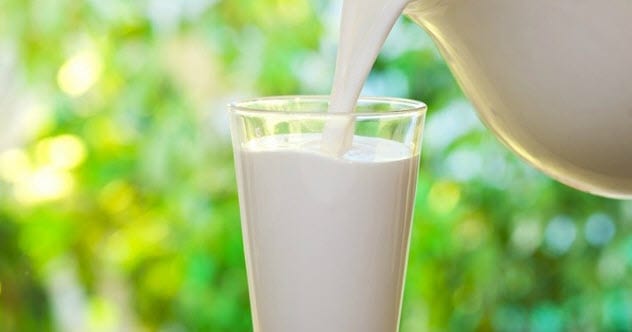 Milk replacements are usually squeezed from almonds, rice, and soybeans. The problem is that they require a lot of water. For instance, almond milk needs around 5 liters (1.3 gal) of water per nut.

In 2016, a company whipped up something that could replace both real and replica dairy. The most remarkable thing is that this new liquid is still made from milk proteins.[4]

Instead of getting these proteins from cows, researchers developed a yeast strain that turns sugar into the milk protein casein. If all goes well, it should taste like the real thing and cost about the same. It has no lactose or cholesterol and is packed with all the nutrients of normal milk.

Manufacturing this cow-free juice emits 84 percent less carbon than the method used by traditional milk farms. This newer process also uses 98 percent less water. As it is created in a laboratory, almost no land is needed, either. Needless to say, it balances environmental concerns well, something that often takes a back seat to mass food production. 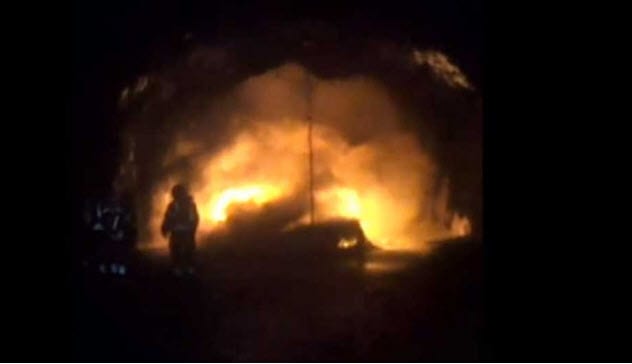 In 2013, a bizarre incident started out with a cheese delivery. The truck driver was tasked with transporting 30 tons of brunost. This cheese is a Norwegian delicacy prized for its sweetness and brown, caramelized look.

When the truck entered the Brattli Tunnel in northern Norway, something sparked a fire. Realizing that the cheese was ablaze, the driver abandoned the vehicle inside the tunnel.

The goat cheese kept the fire burning for five days. Poisonous gases filled the tunnel so densely that firefighters dared not enter it. The damage also shut down the tunnel for months.

The scary truth is that cheese is flammable, but brunost is extra combustible. It contains more sugar than most other cheeses and is up to 30 percent fat. The high fat and sugar content of the treat makes it burn like petrol when the heat is just right.

The cheese fire could not be subdued by plain water but needed the chemical mist of a Class K extinguisher.[5] 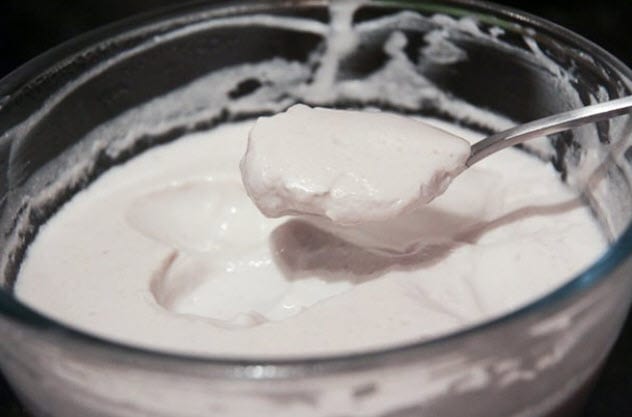 In 2015, researcher Cecilia Westbrook decided to make yogurt using the bacteria from her own vagina. Westbrook swiped her nether regions with a wooden spoon and left the utensil overnight in a bowl of milk. The resulting yogurt tasted tangy and sour and caused her tongue to tingle.

The whole thing sounds insane, but Westbrook realized that there were no studies about the vast amount of bacteria that live inside the vagina. Current research is more obsessed with gut bacteria’s benefits to our health. However, some microbiologists are so aware of the positive effects of vaginal bacteria that they smear their own newborns with such fluids.

Although eating it may have been too daring (there are bad genital bacteria, too), other researchers were inspired to tack on with more graceful experiments. Soon, they also proved that bacteria could be cultured from the human vagina. Future applications for this “yogurt” are more medicinal than culinary, especially in the field of probiotics and yeast infections.[6] 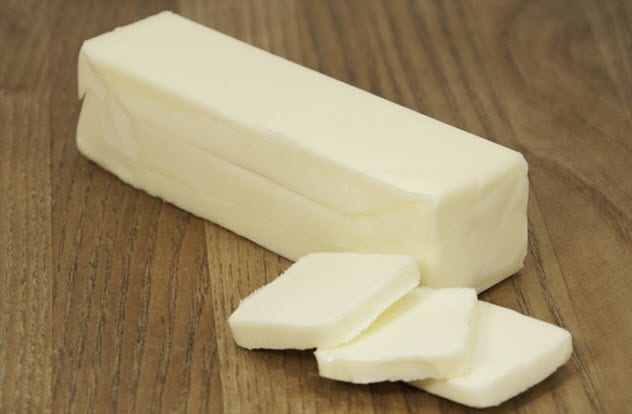 When France invented margarine in 1869, it became a cheap alternative to butter. It was a hit in the United States, where dairy farmers decided to fight back in an ugly manner. Their campaign insisted that margarine was unhealthy, caused mental illness, and threatened the moral order. Worse, it threatened the American way of life.

The campaign’s claims about shady sources for margarine’s ingredients were so successful that the legal system created the 1886 Margarine Act. It was the first of many laws designed to tax the substitute into submission.

This nearly destroyed the margarine industry. Cartoonists jumped in and portrayed margarine makers putting unmentionables, including arsenic and stray cats, inside their products.

Most bizarrely, the state of New Hampshire ordered that margarine had to be pink. As it looked strange, sales dropped. But defying the pink law meant two months in prison. Eventually, the Supreme Court said that it was a stupid law (in so many words) and reversed it.[7]

Margarine survived, but most people are still divided on their preference for it or butter. 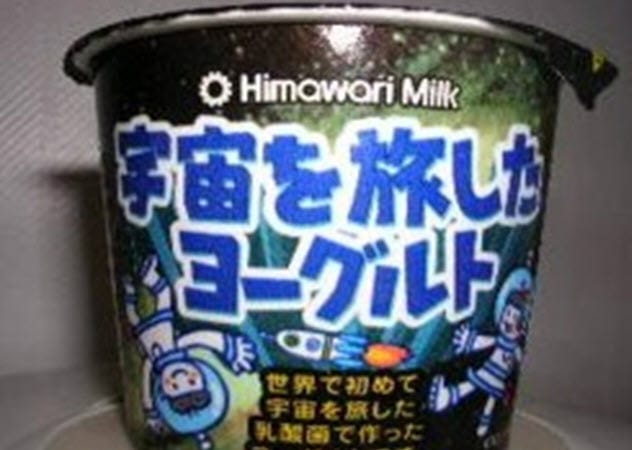 In 2006, a rocket left the Baikonur Cosmodrome with two unusual passengers. Himawari Dairy from Japan had placed two strains of bacteria aboard. Both were used in the manufacture of dairy foods.

The strains were lactic acid bacteria and a unique line of Lactobacillus paracasei. The expectation was that cosmic radiation would somehow boost the bacteria’s flavor and immune system benefits in yogurt.

After 10 days in orbit, almost half of the delicate bacteria died. The rest made yogurt back on Earth. Himawari Dairy claims that the organisms that survived space imbued their product with a stronger flavor than yogurts spawned by mere Earthbound bacteria. They even called it “Uchu O Tabi Shita Yogurt” (“yogurt that traveled in space”).[8] 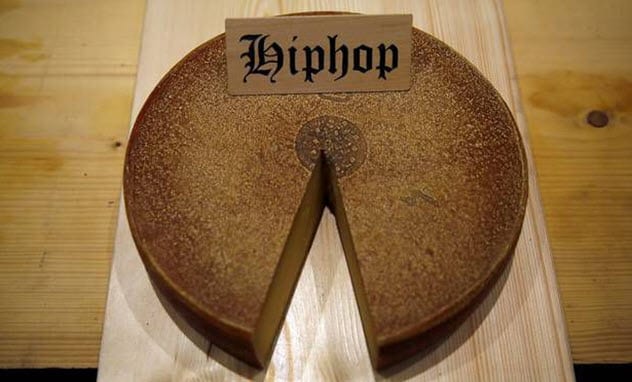 In 2018, Beat Wampfler probably seemed crazy when he took his idea to Michael Harenberg. After all, Wampfler was a veterinarian who made cheese in his spare time, and he suggested to Harenberg that music could affect the flavor of cheese. As the music director at the Bern University of the Arts, Harenberg typically expected a soberer approach to the use of melodies.

Wampfler’s enthusiasm won out. Together with a team from Bern University, he matured nine cheese wheels in a cellar for six months. Placed in its own crate, each Emmental cheese listened to a nonstop loop of a single song.

There was a “rock” box that listened to “Stairway to Heaven” by Led Zeppelin. The classical cheese got classy to sounds from Mozart’s The Magic Flute. Vril’s “UV” raised a techno cheese, while an ambient wedge was soothed by Yello’s “Monolith.”

The other cheeses were used as silent controls or exposed to single tones. It was the hip-hop cheese that came out on top with the cheesiest flavor. That particular wheel got treated to A Tribe Called Quest’s “Jazz (We’ve Got).”[9] 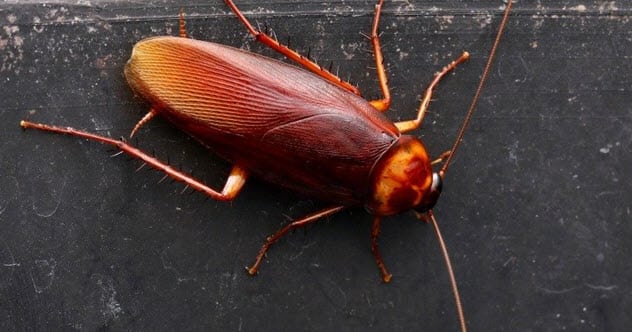 To feed the growing global population requires out-of-the-box thinking. In 2016, researchers took their brains out of the box and into the insect world—more precisely, to Cockroach City.

Although roaches are not the most adorable or appetizing thing to look at, a species called Diploptera punctate could be the answer to world hunger. This roach feeds its offspring with a milk protein crystal. Here is the zinger. A single crystal has three times more energy than buffalo milk, which is more nutritious than cow’s milk.

As it is not feasible to milk a cockroach, scientists isolated the genes behind the crystal production. The next step will be to see if the genes and the milk can be recreated in the laboratory.

The effort will be well worth it. These crystals are a complete food that contains fats, sugars, and proteins. In addition, they have all the essential amino acids and release more protein during digestion. For those needing a dense source of sustenance that continues to provide energy long after eating, this could be the perfect supplement.[10]