In the course of the universe’s history, time is mostly irrelevant. Stars are born, they live, and they die; billions of years go by in vast amounts of space unnoticed. Einstein showed us that time really only matters when there is someone there to be affected by it. In this list, we will take a look at events or inventions for which the basic science can be measured to less than one second. 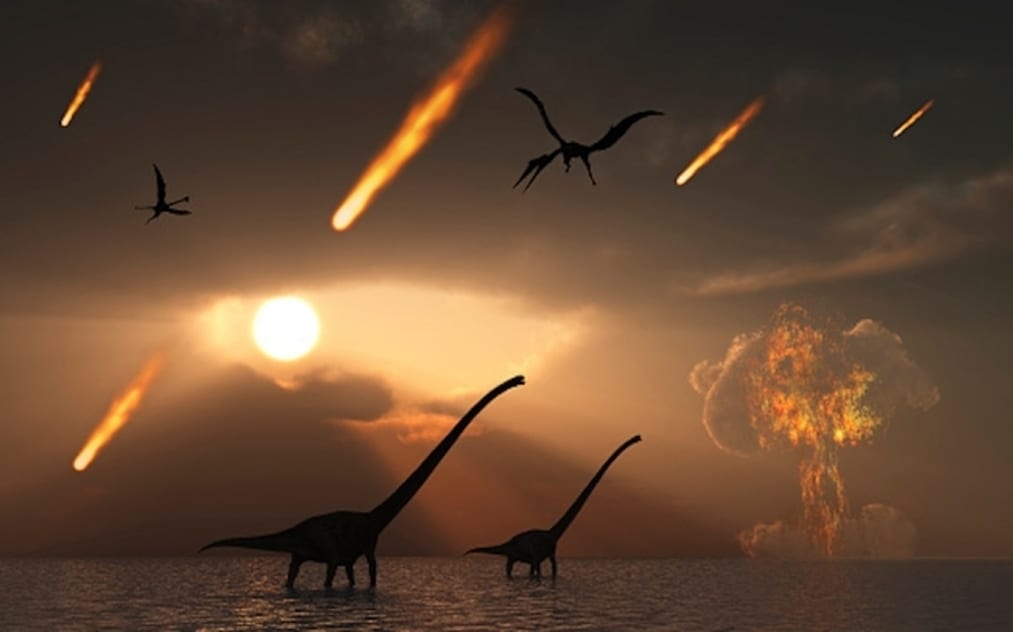 During the last extinction event, at the end of the Mesozoic Era 66 million years ago, a mountain-sized asteroid slammed into the Earth at about 40,000 miles an hour. The magnitude was about that of 100 TRILLION tons of TNT. According to scientist Joanna Morgan, “anything within 600 miles of the impact site was instantaneously, or within a few seconds, killed by the fireball.” In just over the blink of an eye, one of the most cataclysmic events in the history of the planet began. The damage, of course, was not limited to the immediate devastation. The long-term effect was the total annihilation of the dinosaurs along with 75% of all species on Earth.[1] 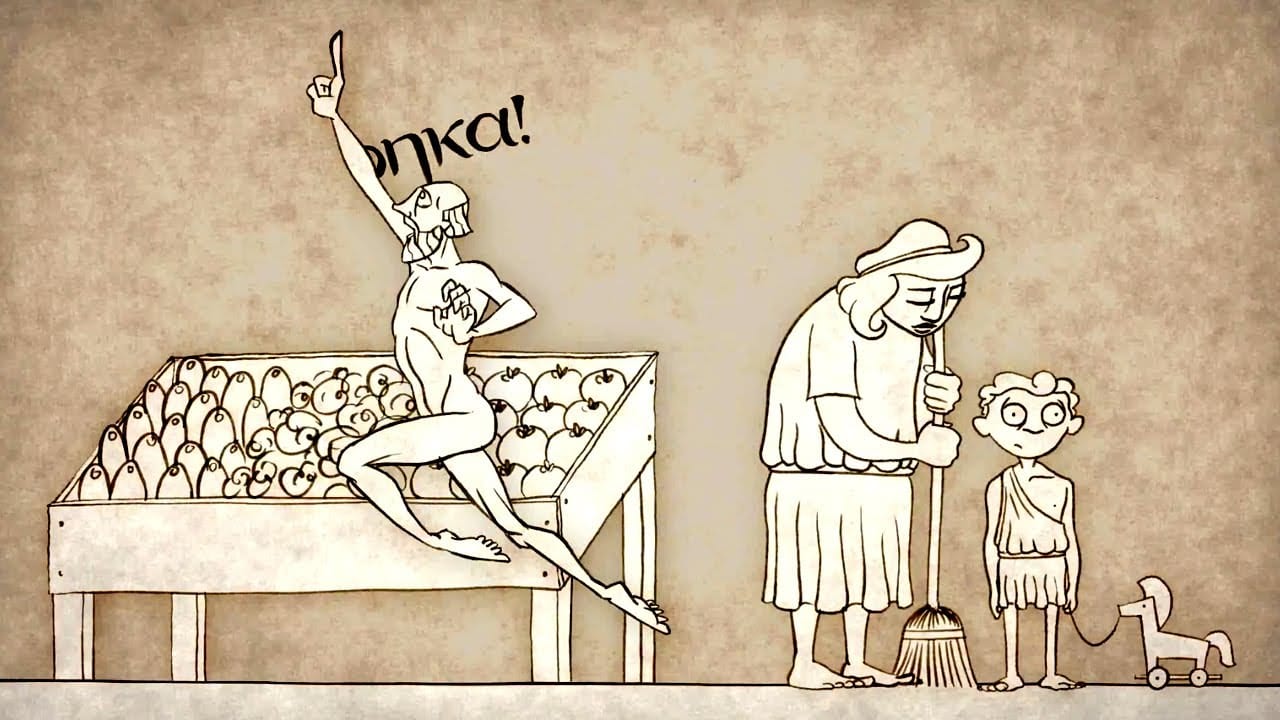 Archimedes was working on solving the problem of whether a crown was made of solid gold when he famously stood up from his bath, shouted “Eureka!” and ran naked through the streets. He had realized that when the water rose as he sat down, the buoyant force on his body was equal to the weight of the displaced water. He now had a way to measure the amount of gold in the crown using his own ‘Archimedes Principle’.

While Archimedes had been working on a solution to this problem for a while, his ‘Eureka’ moment came in an apparent instant. Studies of the response of neurons to stimuli show that it takes anywhere from 300 to 500 milliseconds (half a second) for the brain to react and send signals to the body. Next time you are lost in a daydream, perhaps the next great invention may just pop into your head. It happens fast, try and write it down![2]

8 The Bullet that Killed Lincoln 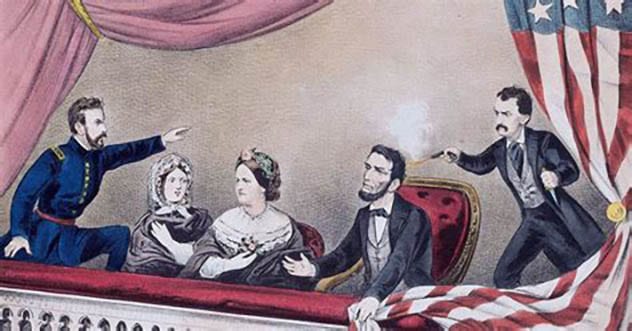 On April 14, 1865, President Abraham Lincoln and his wife were enjoying “Our American Cousin” at Ford’s Theater in Washington, D.C. John Wilkes Booth snuck into the private box, and fired a bullet from a single shot .44-caliber Derringer pistol into the back of Lincoln’s head. Although it took approximately 9 hours for Lincoln to expire, the process that led to his eventual death was much quicker. As small as the Derringer is, the bullet still exits the gun after trigger-pull with remarkable velocity. When the gun’s hammer hits the firing pin, the bullet exits at anywhere from 500 to 700 feet-per-second. It took roughly a few thousandths of a second for the bullet to travel from barrel to impact. While rather slow in the field of handguns (some can get up to 2000 feet-per-second today) the Derringer was still plenty quick enough to get the best of Honest Abe.[3]

7 Edison Turns On His Light Bulbs 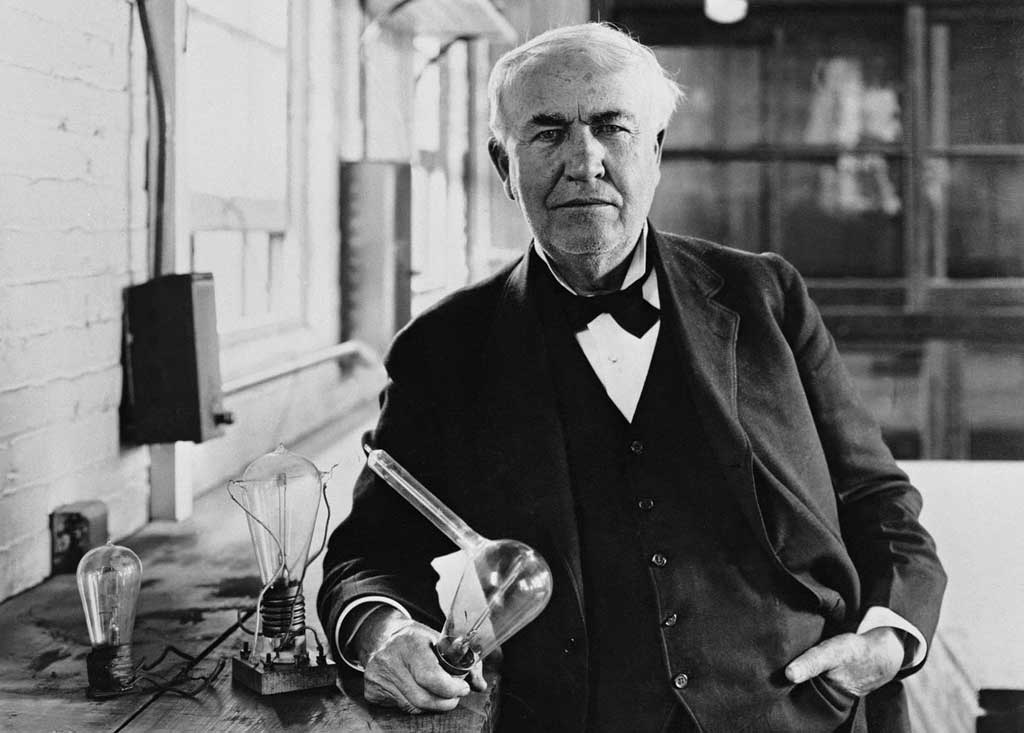 Thomas Edison was not the first to try using electricity to light up a room. In 1802, Humphry Davy invented the first electric light known as the Electric Arc Lamp. However, it did not stay lit for long, and was far too bright for everyday use. In 1874, Toronto medical electricians Henry Woodward and Mathew Evans built their lamps using different types of carbon rods held between electrodes in glass cylinders filled with nitrogen. They were unable to sell their invention, and ended up selling their patent to Edison. Edison would go on to perfect their work and revolutionize the light bulb.

On December 31, 1879, Edison flipped a switch causing electric current to race through wires at close to speed of light (186,000 miles per second in a vacuum). Although the bulbs Edison used 140 years ago probably took a second or two be fully lit, the most historical illumination since the discovery of fire took a mere fraction of a second to begin.[4] 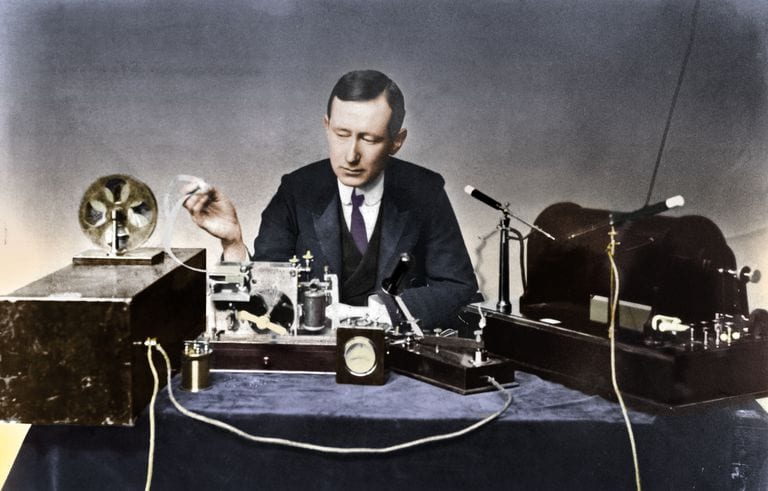 Using Samuel Morse’s code, the telegraph required a key, a battery, wire, and a line of poles between stations for the wire and a receiver. The telegraph had been in use for about 50 years when Guglielmo Marconi came up with his wireless version. At the end of the 19th century, Marconi proved everyone wrong when he sent a wireless message across the Atlantic.

Beginning in 1894, Marconi started sending transmissions over short distances, eventually across the English Channel in 1899. Finally, on December 12, 1901, Marconi was in Canada when he received a message from England. The message was simple: the Morse-code signal for the letter ‘s’. The transmission did not follow the curvature of the Earth as some had proposed, rather it reflected off the ionosphere and back down toward Canada. Radio waves travel at the speed of light. Taking into account atmospheric interference, the transmission was still nearly instantaneous.[5] 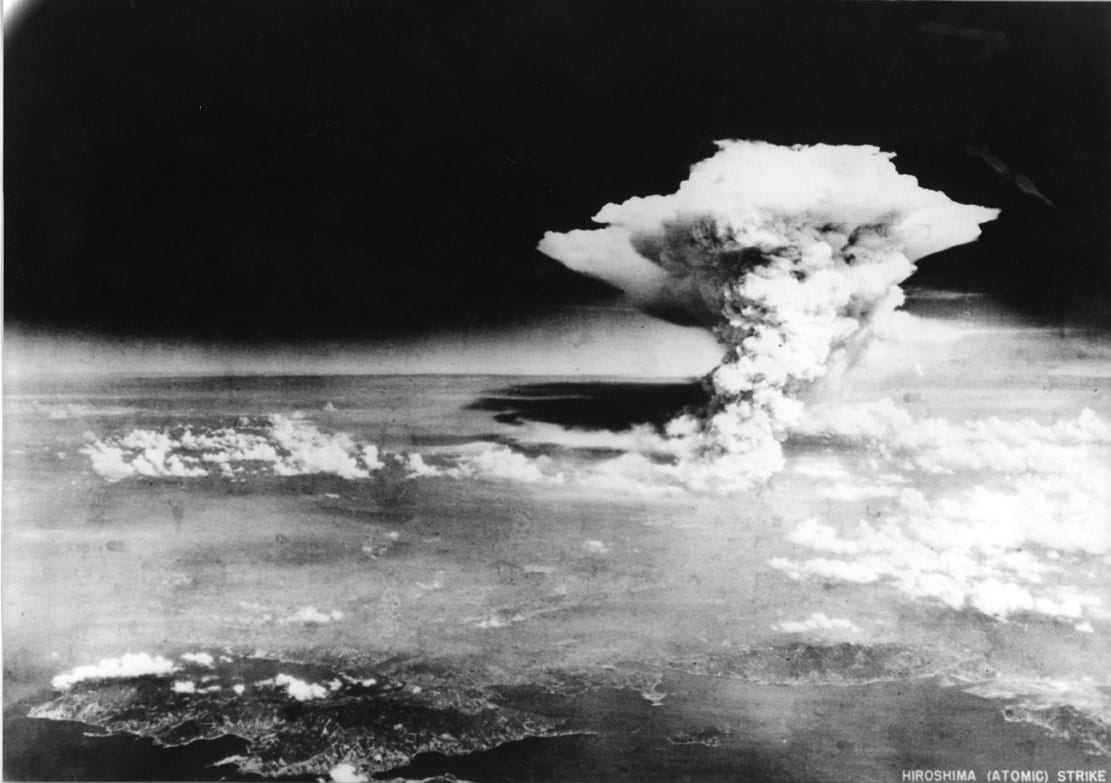 The two atomic bombs dropped in Japan in 1945, Little Boy on Hiroshima and Fat Man on Nagasaki, immediately altered the course of World War II. The bombs caused devastating damage that would last for decades.

Little Boy was a uranium-fueled bomb that exploded with about 13 kilotons of force. Fat Man was powered by plutonium and yielded 21 kilotons of force. When one free neutron collides with the nucleus of an atom of radioactive material, it knocks two or three more neutrons free. This causes energy to be released, and the newly freed neutrons strike more nuclei. This chain reaction of energy release spreads almost instantaneously. A free neutron travels at about 3% of the speed of light. The complete process, after accounting for the number of generations required for a chain reaction, takes about a microsecond, or one millionth of a second. Physicists at Los Alamos nicknamed this time a “shake”, as in “as fast as the shake of a lamb’s tail.” In just two shakes, between 60,000 and 80,000 people were incinerated in Hiroshima and 40,000 in Nagasaki.[6] 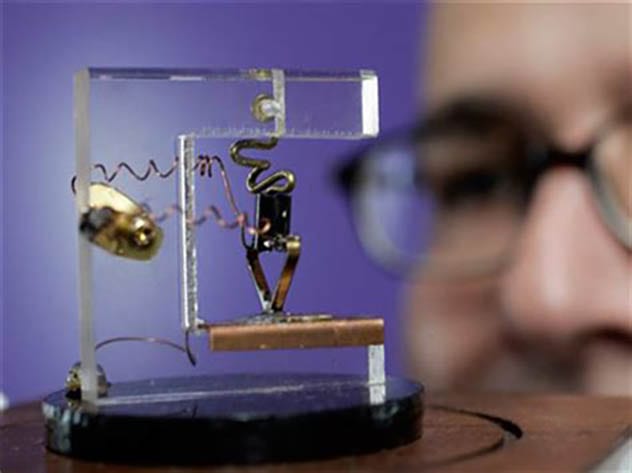 Invented in late 1947, the transistor was something that revolutionized the electronics industry in the 20th century. Inventors William Shockley, John Bardeen, and Walter Brattain eventually received the Nobel Prize for their efforts.

The switching speed of these early germanium transistors topped out at 60 GHz, meaning it took about 20 nanoseconds (20 billionths of a second) to switch. Improvements such as switching from germanium to silicon, and creating the digital transistor (transistor chips with built-in resistors) significantly enhanced the capabilities of the transistor. Today the fastest switching transistors can operate at an astounding 800 GHz or more.[7]

On October 29, 1969, using an experimental connection called ARPANET, researchers at UCLA sent the first message across networked computers. The message received by Stanford researchers read “LO”. It was intended to read “LOGIN” as that was the password for the system, yet the system crashed after just two letters.

Both schools had recently installed Interface Message Processors, or routers as we now know them. Once Stanford got its IMP, a high-speed line was put in to connect the two. There was now a two-node network, enabling someone to use a computer at one school to access the resources on the other school’s computer. The ARPANET line speed at the time was 50 Kilobits-per-second. With 8 bits in one byte, 2 letters of the alphabet would take 16 bits. After a bit of math, we get something in the neighborhood of a few 10,000ths of a second in transmission time. It is no wonder that we get so angry today when it takes even seconds to load a page on the internet…they set the bar high back in 1969![8] 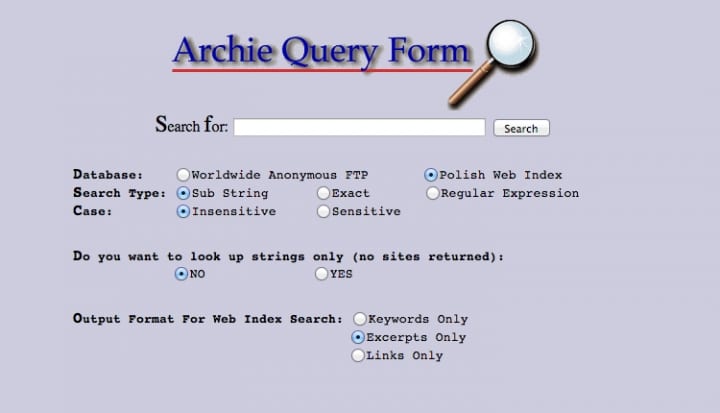 1990 saw the creation of Archie, widely considered to be the first search engine. With so many ways to narrow searches using Archie, it took much longer to choose all the different parameters than it did for the search results to return. Archie – and eventual friends Veronica and Jughead—only had the capability of searching titles and descriptions; none of them indexed the contents of any of the documents they found.

Over the next few years, many more search engines popped, but none crawled the entire text of every indexed web page until Web Crawler in 1994. We all remember using Lycos, Excite, Altavista, and Ask Jeeves at one time or another. We also remember being on dial-up and waiting for what seemed like forever (really, just several agonizing seconds) for our results.

When Google jumped on the scene in the late 90s, they began to use an algorithm that placed a high value on page ranking. Today, Google is mostly a mess peddling censorship for cash, but run a search on pretty much any modern search engine, and it almost always takes less than a second. Brilliant search sites like DuckDuckGo don’t reveal all that goes into their methods to give us such speedy results; but when it is that fast, does it matter how?[9] 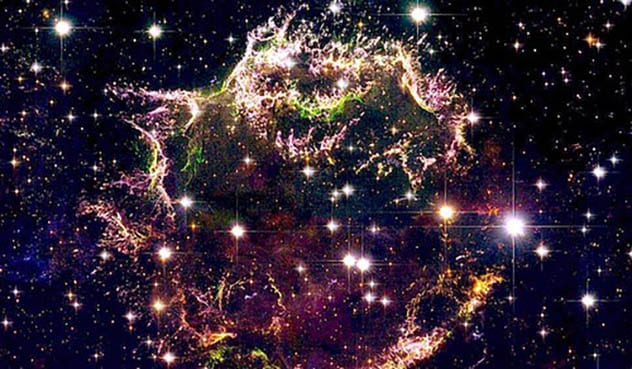 There is evidence that supernovae throughout the universe are ultimately responsible for seeding the galaxies, solar systems, and our little blue sphere. Scientists measured the remnants of the 1680 explosion of Cassiopeia A that included calcium, sulfur, silicon, iron, and, most plentiful of all, oxygen. In smaller amounts they found phosphorus, carbon, nitrogen, and hydrogen. All the things essential for creating DNA were present. A supernova closer to home may have caused such mass lightning strikes as to change the dynamics of the terrain, pushing our ancestors out of the trees and forcing them to adapt to new situations quickly.

The most common type of supernova is core-collapse. When a star about 10 to 50 times the mass of our sun reaches the end, the hydrogen runs out and it starts burning off its helium. It burns through successive elements on the periodic table until it gets to iron, which it cannot burn off. Nothing can stop the collapse of its core and the outer edges collapse at 23% the speed of light (70,000 meters per second). A quarter of a second later, remaining material bounces off the iron core, creating the initial phase of the shockwave.

In the past 1,000 years, humans have been able to look to the sky and bear witness to three different supernovae. We have already come down out of the trees, if the next one we see is close enough to us, everyone better learn how to swim.[10]

About The Author: Hello everyone on the internet! A little about me: I have two degrees in film: a B.A. from UC Berkeley, and an M.F.A. from Academy of Art University. I worked for a little while in the production office on several films including Bee Season, and Milk. I transitioned to TV and spent a few years in the “bullpen” working on live games for Pac-12 Networks. Lately, I’ve found that writing is what really does it for me. I’ve been writing film reviews for five years for the Concord/Clayton Pioneer. Recently I’ve decided to branch out into comic books and online writing. I have also been a swim coach for twenty years. Hoping to provide everyone with some fun stuff to read while we’re all stuck at home!