When we hear the word saint, we are drawn to think of holy men and pious women. The very notion of sainthood suggests acts of mercy, temperance, and kindness. While there are many saints who do fit such a definition, there are countless more whose lives were somewhat different. From bloodthirsty pirates to violent fugitives and petty thieves, history is full of people who were beatified (officially made a saint) despite their rather dubious behavior.

So here are ten saints who lived extraordinarily unsaintly lives and whose stories should give hope to even the most troublesome of us.

Related: Top 10 Saints That Are Not Recognized By Any Church

Saint You Should Know: Augustine of Hippo

St. Augustine of Hippo is one of Christianity’s most influential saints. His theological masterpiece, Confessions, is a cornerstone of modern religious philosophy. Over five million words of his writings survive. However, it is worth asking what exactly he was confessing to.

Born in North Africa, Augustine was given an excellent education from a young age and quickly became a star student wherever he went. However, Augustine admits in his Confessions that he stole fruit from a neighboring garden as a schoolboy. He did not want the fruit, but he was so enticed by doing something forbidden that he couldn’t help himself. Later, despite the wishes of his Christian parents, Augustine became a Manichaean. This rebellious streak showed itself repeatedly in Augustine’s playboy lifestyle. He engaged in countless love affairs and fathered illegitimate children during an itinerant life that took him from Carthage to Rome and Milan.

He openly admitted that he found “great attractiveness in beautiful bodies, in gold and silver.” (LINK 4) As such, one of Augustine’s most famous quotes, “grant me chastity and continence—but not yet,” perfectly encapsulates his life.[1]

There are two St. Pelagias, both from Antioch. One of them was a 15-year-old Syrian virgin who committed suicide to preserve her chastity from Roman soldiers. The other Pelagia, originally called Margaret, was known by the cognomen Harlot. That should tell you everything you need to know. She was the head of an exotic dance troupe, allegedly wore nothing other than gold and pearls, and lived a life of prostitution and luxury.

A bishop named Nonnus noticed her beauty and somehow convinced her to be baptized. Pelagia followed this sudden conversion by going to Jerusalem, where she disguised herself as a man and lived in a cave. A lifestyle of extreme asceticism made the formerly beautiful Pelagia totally unrecognizable, and she died of emaciation in her cell. Previously known as the “beardless hermit,” the priests who found her body were shocked to find that this famous monk was actually a woman.[2]

How the Rus Became Christian – Vladimir the Great DOCUMENTARY

Grand Prince Vladimir the Great was a mighty warrior. His conquests firmly established the provinces of Novgorod and Kiev, which would one day diverge into separate Ukrainian and Russian entities. It has been speculated that Vladimir, the spiritual founder of the Russian nation, is the personal hero of his namesake and current Russian President, Vladimir Putin. Indeed, Putin unveiled a 16-meter-tall (52-foot) statue of St. Vladimir in 2016.

Vladimir started life as a devout pagan. At one point, he had over 800 concubines, along with several wives, and erected multiple statues to the pagan gods. Worst of all, Vladimir even engaged in religious rituals involving human sacrifice. If you are wondering how this blood-drenched pagan warlord has since become a revered Orthodox saint, it’s because Vladimir converted his kingdom to Christianity. Having sent envoys around the world to decide which religion was the best, he settled on Orthodox Christianity, apparently preferring its mysterious nature to Judaism, Islam, or Roman Catholicism.[3] 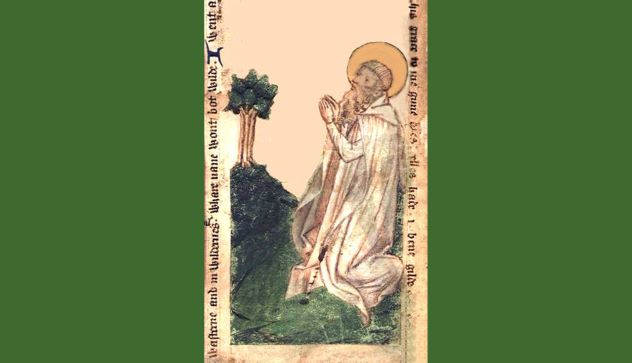 If you visited St.Godric’s former hermitage, you would be forgiven for thinking his life was an uninteresting one. Situated in a picturesque bend of the local river, Finchale Priory is a sleepy old place. But Godric, who spent the last years of life there eating wild honey and sleeping outside, had more than a few adventures before taking to monastic reclusion.

Godric came from humble origins and started life as a huckster, traveling across Europe to sell minor wares. But he soon gained an appetite for adventure. Godric built a boat, found a crew, and set off for the Mediterranean. There he became a merchant and later a hard-drinking, woman-chasing, con-artist pirate. As a captain and owner of two vessels, Godric certainly got his fair share of adventure, even helping out the crusader king Baldwin I of Jerusalem.

This all changed when Godric visited the Holy Island of Lindisfarne and chose to become a hermit. To help give up the pirate’s life, Godric apparently controlled his lust by sitting in a barrel of freezing water for hours at a time.[4]

Genesius is probably the least sinful of all the saints mentioned on this list. Neither a murderer nor a thief, his life was altogether less remarkable. What makes it worth mentioning is the sheer irony of his conversion. Genesius was a Roman comic actor whose career had stalled. Diocletian, however, was returning to Rome to celebrate two decades as emperor. Knowing that Diocletian had carried out frequent persecutions against Christians, Genesius decided to write a play mocking Christianity. This would curry favor with the emperor and perhaps bring him success—or so Genesius thought.

Genesius immersed himself in Christianity, hoping that by better understanding the religion, he could more thoroughly satirize it. Everything went according to plan until, when the play was being performed and the character played by Genesius was supposed to undergo a spoof baptism, he had a revelation. The fake baptism became a real one, and Genesius converted to Christianity on the spot, in front of the emperor. Diocletian, furious with Genesius, had him tortured and beheaded. Genesius, unsurprisingly, is now the patron saint of actors.[5]

WHAT DO WE KNOW ABOUT SAINT PATRICK? The real St Patrick | St Patrick documentary | History Calling

St. Patrick is one of the world’s most famous saints, largely because of his association with Ireland and the globally celebrated festival of St. Patrick’s Day. As such, St. Patrick has essentially been merged with stereotypes of Irishness—leprechauns, shamrocks, and Guinness—but his story is much more complex.

Born in Ireland and later credited with converting his homeland to Christianity, Patrick had a tumultuous upbringing—including being kidnapped by pirates. When he returned to his homeland as an ordained priest, Patrick was tasked with converting the Irish. Nonetheless, Patrick was accused by his superiors of having become a priest merely for the prestige, and also to take advantage of the priesthood’s tax benefits.

The church later brought charges of bribery against Patrick, ordering him to stop taking gifts of jewelry and gold from rich women he had baptized. Even if Patrick was a financial con-man, his mission was still a success. He is rightly regarded as the national apostle of Ireland.[6]

St. Mary of Egypt was not totally unlike St. Pelagia the Penitent. However, what sets Mary apart is the scale of the accusations leveled against her. While Pelagia was known primarily for her luxurious lifestyle, Mary of Egypt was famous for the sheer relentless with which she engaged in acts of “harlotry.”

Mary ran away from her parents at the age of twelve. She went to Alexandria—then one of the world’s biggest cities—and lived for seventeen years as a prostitute. Curiously, Mary refused all payment for her services, apparently offering them purely because of her insatiable lust. As such, she made money by begging and spinning flax.

Later in life, Mary made an “anti-pilgrimage” to Jerusalem, hoping to find even more opportunities for prostitution. She even bought passage there by offering sexual favors to other pilgrims! Once she arrived in the Holy City, Mary could not bring herself to enter the Sepulchre. She then saw a statue of the Virgin Mary and went to live in the desert. Mary is now revered as the patron saint of penitents, having so suddenly and totally changed her way of life.[7]

While the other stories mentioned on this list may have been embellished by time, the life of Longinus is wholly fictitious. However, it is worth sharing because his unsaintly behavior was arguably the worst of all. Longinus is the name given by an apocryphal 5th-century text—the Gospel of Nicodemus—to a Roman centurion mentioned in the New Testament. This centurion was in charge of the Roman soldiers who oversaw the Crucifixion. Under his watch, the Roman legionaries dressed Jesus in a purple robe, gave him a crown of thorns, and tortured him. Longinus himself pierced the side of Jesus with a spear. It is from the Greek for spear—lonche—that Longinus probably derives his name.

As far as unsaintly behavior goes, it surely cannot get any worse than literally stabbing Jesus. Nonetheless, Longinus’s legend states that he was horrified by what he had done and later converted to Christianity. He is now venerated as both a Catholic and Orthodox saint.[8]

Hell Hath No Fury: The Saint Who Went All John Wick on Her Husband’s Killers

Unlike Mary and Pelagia, St. Olga’s unsaintly activities were not restricted to promiscuity and luxury. Her early life was unremarkable. But after Olga’s husband, the Prince of Kiev, was murdered by Drevlians in one of history’s most gruesome executions, she stepped in to rule.

Her revenge came quick—she captured all twenty of her husband’s murderers and buried them alive. Soon afterward, she devised a way to kill the Drevlian nobility. Offering peace terms, Olga invited them to Kiev. When they went to the bathhouse to wash after their long journey, she had the doors locked and set the building on fire. Olga’s vengeance was not sated, however. Combining intelligence and brutality, Olga later destroyed the Drevlian capital by having her soldiers release pigeons and sparrows bound with sulfur. They landed on the wooden roofs of the city, thus setting them on fire and burning the entire settlement to the ground.

Olga has become a saint because she attempted to convert the Kievan Rus to Christianity—an ambition achieved by her grandson, Vladimir the Great. Nonetheless, her bloodstained life marks her as one of history’s fiercest holy women.[9]

Jacques Fesch is not actually a saint—yet. A proposal for his beatification was submitted in 1993 and has yet to be resolved. Nonetheless, his story deserves its place on this list. Born to unloving, authoritarian parents, Fesch was a poor student and gave little attention to his supposedly Catholic education. By the age of just twenty-four, Fesch had already fathered an illegitimate son, married and subsequently abandoned a wife, and quit two well-paid jobs.

Hoping to make a new start, Fesch hatched a plan to buy a boat and sail to Polynesia. His father would not lend him the required 2,000 francs, however, so Fesch decided to steal the money. Tragically, the theft quickly became a double murder. He bludgeoned and accidentally shot a currency dealer, then gunned down a police officer. This crime became a national scandal, and the police officer’s funeral was broadcast all over the country. Three years later, Fesch was condemned to death—execution by guillotine. It was during those three years, much of it spent in solitary confinement, that Fesch underwent a complete spiritual revolution and became a devout Catholic.[10]