Finding treasure—who wouldn’t want to do that? We’ve all heard about treasure hunters diving among sunken ships or adventurers seeking hidden gold in caves or mines. Often these attempts take careful study and planning, involving many resources and even more money. But sometimes, people simply stumble upon surprising finds while doing nothing at all.

What better motivation to get outside and take a walk? Ten people found remarkable artifacts and natural treasures while out and about doing other things. And not one of them needed a metal detector to find their treasures and artifacts…

10 Forest of Fossils in the Foothills

A park ranger and naturalist, Greg Francek, was walking in the Sierra Nevada foothills near Sacramento, California, in May 2021. He was employed by a utility department that provided drinking water to the region. It was near one of the watersheds that he noticed an oddity in the soil. Francek had wandered into a forest of petrified trees, a site with primeval origins.

He was drawn to the forest many times but contacted experts when he found fossilized vertebrae. That was when paleontologist and geologist Russell Shapiro brought his team to the site. Francek’s find exceeded their expectations. The ancient forest dates from ten million years ago, during the Miocene Epoch, when the earth was warm enough to sustain tropical forests. Within the forest of six hundred petrified trees, they found the skull, tusks, and teeth of a well-preserved mammoth from eight million years ago.

Shapiro’s team also found another ancestor of the elephants, a gomphothere with four tusks, and an ancient camel that once stood as tall as a giraffe. Dozens of species were categorized, along with hundreds of specimens. Rhinos, horses, tapirs, giant tortoises, and fish were found, including a salmon that weighed over three hundred pounds. It was determined that floods and volcanic debris flow had carried the remains to the flood plains.

The mastodon skull, tusks, and teeth were put on display in California State University Chico’s Gateway Science Museum. As of yet, the forest site remains undisclosed. Further developments are to be published.[1] 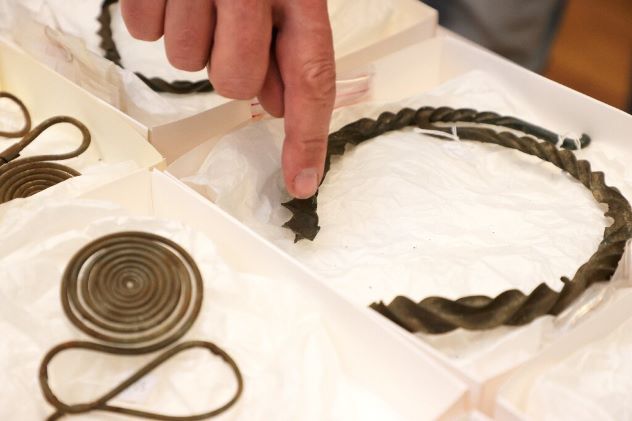 It was April 2021 when Tomas Karlsson roamed a forest in Western Sweden and made an astonishing discovery. He was a surveyor and mapmaker with an orienteering club, at work on a map. His eyes were on the ground when he first caught sight of something metal. He had found ancient jewelry loosened from the rocks nearby.

Karlsson was soon in contact with the University of Gothenburg.

Researchers found over eighty Bronze-Age artifacts at the site, all dating from 750 to 500 BC. This time period ushered in the eras of Greek city-states where cultures were established, like the Phoenicians and the Etruscans. It was during those eras that Homer is said to have written The Iliad and The Odyssey.

The Gothenburg archaeologists unearthed bracelets, necklaces, buckles, and other clothing ornamentation, such as headpieces and ankle jewelry. All the artifacts were intact. It is believed they were left as an offering to a god or goddess or with the deceased in a burial site.[2] 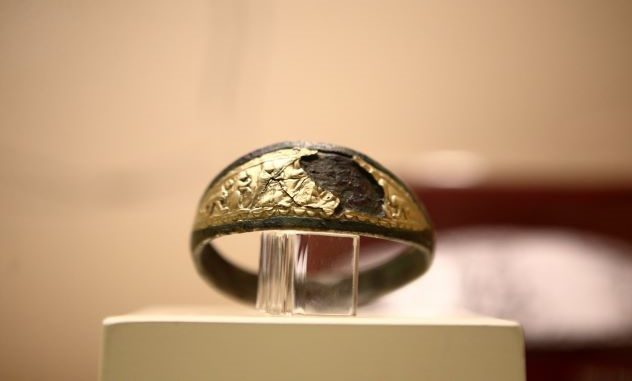 A farmer tended to his field in August 2021 in a central province of Çorum, Turkey. He was behind a plow in his field when he struck a bracelet of bronze, nickel, silver, and gold. The curious farmer brought it to the Çorum Museum, where they determined the bracelet was 3,300 years old from the end of the Bronze Age. It had been crafted in the 13th century BC by the Hittites, known as the first civilization to craft iron weapons and armor.

Very few jewelry pieces from the Hittites had been found, let alone one with such detail. The bracelet was covered with Hittite symbols, while the interior was coated in gold. Etched in the gold-plated interior were depictions of the goddess Shaushka and her two servants, Ninatta and Kulitta. She was a goddess in the Hurrian religion, a deity of love and war.

Since the find, the bracelet has been restored. It rests in the city of Hattusha, a heritage site that was added to UNESCO’s World Heritage List in 1986. The ancient Hittite city was described as “an open-air museum” of city walls with gates and underground tunnels that spanned miles.[3]

7 Sword and Axe from a Stone

In November 2021, Roman Novák was searching for mushrooms across the rural forests and hills near his home in Jesenik, Czech Republic. During his travels, he paused to inspect a piece of metal that he noticed lodged between stones. The blade of a sword was soon revealed, and beneath it, a bronze ax. Though the blade was broken near the hilt, the pommel and hilt were engraved with rows of circles and crescents.

His report to archaeologists at the Silesian Museum, Opava, intrigued them enough to send a team to the site. After analysis, the sword was dated to the Bronze Age, 3,300 years ago. It was likely to have been a ceremonial sword, as the blade’s metal would have been too weak for use in battle. Oddly, the site of the sword was far from any known settlements, prehistoric included.[4]

6 A Clump on a Beach 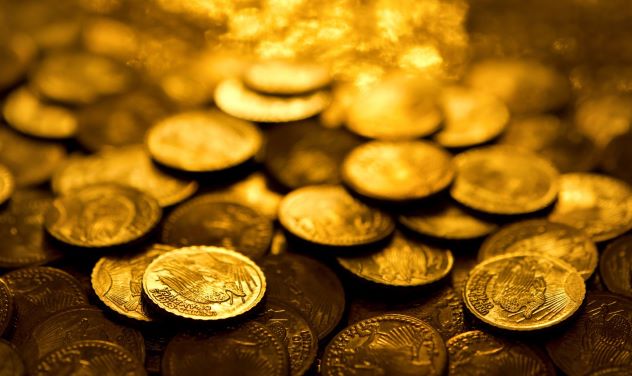 A tour guide was on a camping trip with his family in August of 2021, near Atlit, Israel, when he made the discovery of a lifetime. Yotam Dahan almost walked into a mound of treasure. Under his flashlight beam, he saw an odd mass of corroded metal that shone bright green in places. They turned out to be coins that had fused together from centuries of submersion or exposure to salt in the air. Dahan lugged the 5.8-kilogram (13-pound) coin bundle to a safer location.

Dr. Donald Zvi-Ariel, a coin expert for the Israel Antiquities Authorities, said the coins were doubloons from 1,700 years ago. There were only trace amounts of fabric around the coins, the bag long since deteriorating. It was unknown where the coins were from, whether they were buried on the beach or washed onto shore from a ship. Either way, Dahan was very fortunate to have made such a large discovery. Fortunate, too, that he didn’t walk into the heavy treasure in the dark.[5]

In April 2019, four ninth-graders wandered a field north of Nazareth, Israel, near a stream in the Galilee, when a glint of gold in the area caught their eyes. The students had found a gold coin. They brought the coin to their geography and history teacher, Zohar Porshyan. He reached out to the Israel Antiques Authority, who authenticated their find as a Byzantine Era, 1600-year-old gold solidus. It was the first of its kind found in Israel.

The solidus had been minted in the ancient city of Constantinople, now known as Istanbul, under the rule of Theodosius II in AD 420–423. Theodosius II was a Christian emperor of the Byzantine Empire from AD 401–450. Interestingly, he was only seven when his reign began. He’s most remembered for the Codex Theodisianus, or the Theodisian Code, a compilation of Roman laws from AD 312, which wasn’t completed until AD 438.

The coin didn’t depict the emperor—as one might expect—but instead, it sported the Roman Goddess Victoria, or “Victory,”‘ as the engraving read. Though the coin resides within the state treasury, the artifact finders were issued a certificate of Good Citizenship by the Israel Antiques Authority. (I’d rather have the coin.)[6] 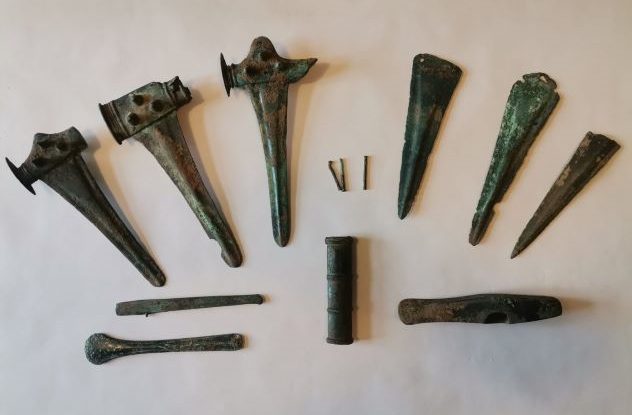 In August of 2021, a farmer in Poland from the Lubusz province labored to clear the rocks from his field. His only intent was to spare his farm equipment. Was it a good day for the farmer? Absolutely. Under a few of those rocks, he found bronze artifacts. Surprised, he secured the site and alerted the proper authorities.

The farmer had found three scepters, three bronze daggers, an ax, a chisel, and a hatchet, according to the Voivodeship Historic Preservation Office. The Únětice artifacts were from the early Bronze Age, 2200–1500 BC. Early civilizations of the era were best remembered for their metallurgical skills with tin-bronze. The Únětice culture spanned several countries—Bohemia in the Czech Republic, Bavaria in Germany, and Lower Silesia in western Poland.[7] 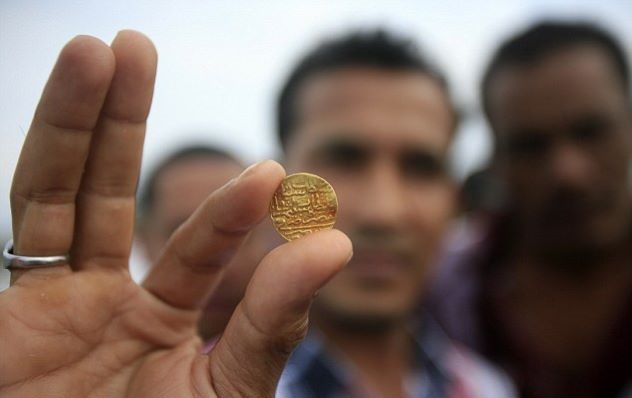 A woman in Indonesia was on the search for oysters when she pulled in an incredible find in November of 2013. She was from the village of Gampong Pande in the northern part of Indonesia. On that day, she found a box covered in shells. The box was full of gold coins from the 1200s through the 1600s. Her find may have been possible due to the tsunami in 2004 that disturbed an ancient cemetery near the village.

Once gossip of her discovery spread, hundreds of people began to swarm the river, searching for more treasure. Other salvaged coins were sold in nearby villages or museums. Who knows how far the coins have been transported now? The portion of the country has yet to be declared a protected site. Officials pushed for further protection as of 2013, though the matter is still in limbo.[8]

Cornwall, 1974, a couple was walking along Loe Bar Beach in England when they found a copper ingot in the sand. It wasn’t until twelve years later that they found a gold coin that was 600 years old.

Due to their find, experts and divers further investigated and discovered a ship from 1527. It was a Portuguese carrack that had been mired off the coast of Loe Bar. The ship carried copper and silver, cloth, and linen. Also found on the ship were musical instruments, navigational tools, and cannon with pitch and tar.

An amazing discovery after many long walks along the beach.[9]

A beach restoration day was held in Norfolk, England, in March of 2022. Jennie Fitzgerald was one of the volunteers, a medical secretary from Sprowston. Fitzgerald was ready to turn back after a long day when she noticed an unusual piece of timber in the sand. She pried it from its resting place, stunned to find a locked treasure chest. On the lock were the initials “VR,” with a little crown. Victoria Rex, the Queen of England during the Victorian era? Fitzgerald thought the chest to be from that time period, an opinion that was confirmed once the contents were revealed.

The Fitzgerald family was able to open the chest. Within it, they found coins of different kinds from more than 100 years ago, clear and amber-colored gems, a pocket watch, and a bottle of perfume. More interestingly, they found a signet ring and a silver matchstick holder engraved with the name Ernest.

They brought the artifacts to the Norwich Council, who sent the items to the historical authorities to be appraised. Updates are eagerly anticipated.[10]