Florida gets a bad wrap, and no more so than the Florida man, known on an international level as an entertaining party game. You type “Florida Man” and your birth date, and voila! You laugh at the idiot in the article who attacked his daughter with pizza, the man who mistook the bank for a Taco Bell drive-thru, or even the guy who drove a Ferrari into a lake after Jesus told him to.

Like most places, Florida is not all bad, and the majority of its inhabitants are not idiots. So to counter the negativity, here are examples of ten “Florida Men” breaking through the stereotype and being the good guys for a change.

Cutting the lawn on a Saturday morning is quite a tedious affair—the back and forth, the exertion, the time wasted—simply to be repeated week after week. The average American can spend anywhere from seven to forty-seven days of their life mowing their lawn. Imagine spending more than a quarter of that time in one spine-breaking sitting.

But that is what one Florida Man did. Chip Hawthorne drove his lawnmower from Titusville to Spring Hill, a trip of 130 Miles, clocking an estimated 15 hours on his garden automobile, all in the name of charity. The idea behind this “Mowathon” was to raise half a million dollars to support the West Orange Habitat for Humanity. Although he fell short of his financial mark, he definitely made a dent in the Florida Man landscape.[1]

This Bear Was Drowning In The Ocean. You Won’t Believe What This Guy Did About It.

Does a bear crap in the woods? Sometimes. Other times, it meanders into a neighborhood where it’s either shot by one of the locals or takes the head off an old lady heading to Walmart. Either way, the result isn’t ideal. When a adult male black bear entered a residential area called Alligator Point, the local animal control was called out. They responded by darting the animal with a sleep-inducing concoction.

In a panic, the bear dove headfirst into the Gulf of Mexico and started swimming. Adam Warwick, a wildlife conservationist, did what any God-fearing Florida Man would have done. He dove after it, risking his own neck by intercepting its path and trying to turn him around toward land, thereby preventing it from drowning once the good stuff kicked in. He eventually had to help the bear keep its head above water and helped to float the bear back to the shore. A national treasure.[2] 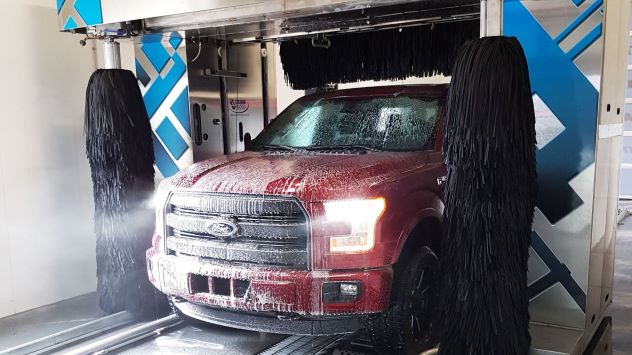 I’m sure you’d all agree—$20,000 dollars is a lot of money. Whether you are living under a bridge or managing a carwash and waxing business, making your way through life and saving for retirement, $20,000 can go far. James Stratford, who manages just such an enterprise, saved a local businessman a ton in damages and possibly his business.

Russell Mir arrived at the carwash to have his truck cleaned. Unfortunately, he had forgotten to deposit three bags of money in the bank and had further instructed the employees at the carwash that everything in the truck was to be discarded. After realizing his mistake, Mir notified Stratford and returned to the scene of the mistake. After an initial search with Stratford, a father of five, they found only one bag of cash in a dumpster. Stratford continued the search, managing to find the other two bags. For his efforts, he was awarded unlimited Slurpees for a year or anything else he desired at Mir’s service stations. He should have kept the dosh.[3]

Boat club worker jumps into river to save drowning manatee

When the attention of Florida Man Don Swartz was drawn by something floating on the surface of the water that resembled the last person left standing after a big night at the bar, he immediately sprang into action. The manatee, which was suspected of being poisoned by the red tide, was followed around the harbor until it flipped onto its back.

Knowing well that the turn meant likely drowning, Don jumped into the water and held the animal up, keeping its nostrils out of the water like an alligator in waiting. Now that is a man-to-a-tee. For forty minutes, Don held the distressed creature until the professionals took over. Apparently, the large aquatic bovine got into a generous helping of toxic red tide seagrass. Ha, is that what they are calling it these days?[4]

If you have ever seen Zoolander, you know two things: (1) you can cheer someone up with Orange Mocha Frappucinos and (2) the devastating aftermath of a fire at a gas station. Tragedy struck when a fire erupted at the service station in Palm Harbor, leaving a woman in mortal danger and her two children to witness the tragedy.

Without a second thought and with nothing to gain, Jared Pierson, a local homeless Florida Man, dashed into the smoke and flames and pulled the two children to safety, risking his own life in the process. He later mentioned that had he known their mother was in danger, he would have likely done even more.[5]

Why Did the Turtle Cross the Road? And How to Help!

We all know the story of the rabbit and tortoise. The rabbit got cocky and took a nap while the slow and steady tortoise went home with the spoils. In the city of Naples, the scaly little guy was still running at full tilt. The problem was that he had a busy road to cross and no speedy legs to carry him across.

An anonymous Florida Man had other plans, hopping out of his truck and carrying Leonardo to safety on the other side of the road. Real heroes don’t have names. They simply live in the imagination and minds of others. This man will live on in the memories of all who witnessed him stop traffic simply to preserve nature. Send our regards to Master Splinter.[6]

Heroes don’t always have broad chests and legendary attire. They come in all shapes and sizes, and when the stars align, they wear steel-toed boots for protection from their day jobs. While mowing his lawn one morning, Tony Neil noticed a neighbor having a seizure while in his car.

With the car still in motion, Tony sprung to action as if taken straight from the pages of a comic book and attempted to stop the car, the vehicle almost crushing his foot if not for the steel boots of glory. Eventually, the car came to a halt against a tree, and with no way to get inside, Tony had someone call 911, who arrived and pulled the man to safety. The victim survived the ordeal and thanked Tony for saving his life. I imagine them sitting in the back of an ambulance, tying all loose ends before the credits start rolling. [7]

Delray Beach, FL. Mother’s day almost turned into a nightmare for a mother of twins as one of her daughters was swept out to sea in a rip current. Working at a local resort, Logan Gaynor heard the screaming and went to see what was happening. Without hesitation, he broke into some Logan’s Run-style action and dashed right into the water to provide help.

Logan was able to pull the girl to safety without anybody getting hurt and was later commended by the local fire department with a lifesaving award, leaving the family with nothing but “what-ifs.” What if Logan wasn’t there? What if he also got caught in the rip current and was dragged out to see? What if they never ever enter the ocean again for any reason for the rest of their lives?[8]

The Air Force Veteran Fighting to Save Afghans From the Taliban

The U.S. Armed Forces have been fighting and working to maintain peace in the Middle East for as long as we can remember. A recent controversial exit from the country had left many Americans stranded in the process. In August of 2021, before the U.S. officially ended its campaign and the Taliban took back power, the U.S. began a mass evacuation of personnel and people on the ground.

A total of 120,000 people were evacuated from the country, with many being aided by private organizations. In their efforts, the U.S. government found one sure way to do it: enter Florida Man. Zach Van Meter, a private equity investor from Naples, was roped in to assist after Uncle Sam—well, okay, it was a former U.S. commando—came knocking. His group, known as the Commercial Task Force, was directly responsible for evacuating at least 15,000 people. Talk about making a difference from afar.[9

If film and documentaries have taught us anything, it’s that the number one unforgivable sin is to let the dog (or cat) die—the biggest no-no in the civilized world. The mom can fall from a cliff, the dad shot, but if Rufus dies, then that’s that. One Florida Man lives and dies by that mantra.

Richard Willbanks, a Florida retiree, was walking his doggo, Gunner, when a gator attacked, dragging the little guy to the water. Alligators are well known for drowning their prey, and Gunner was no exception. Richard flew after the hungry gator and went looking for it underwater before lifting the reptile with the dog still in its jaws out of the lake. Eventually, Willbanks managed to wrestle the dog free only with minor scratches. And get this—he didn’t drop his cigar. All the commotion, the struggle for life and death, and his cigar remained in his mouth throughout the entire ordeal. We all hope that Richard lives forever. A true Florida Man.[10]