Since its release in 1981, the movie Silence of the Lambs has become a horror icon. The American Film Institute considers it one of the best films of all time, and it is only one of three movies to win the “big five” Academy Awards for Best Actor, Actress, Director, Movie, and Screenplay.

In a movie filled with terrifying moments, there is one that stands out. While investigating a storage facility, FBI Agent Clarice Starling finds a large jar that contains a human head. The gruesome sight horrified the agent, not to mention the audience.

While discovering a head in a jar might be the stuff of movies, finding human remains in storage units is not unrealistic. Dozens of such cases have happened around the world to people who never imagined seeing a tiny corpse stuffed into a suitcase or a military hero’s ashes on a shelf. From murders to thefts, accidents to suicides, gruesome crime scenes to sadly forgotten histories, storage units have many stories to tell. Here are ten of them.

Related: 10 Family Secrets That Will Truly Horrify You

The idea of finding something valuable in an abandoned storage unit has made TV shows like Storage Wars and Auction Hunters popular. In those shows, as in real life, if a storage unit goes unpaid or has been abandoned, the owners of the facility can auction off its contents. The bidders don’t know what they might find—it might be valuable art or jewelry; it might be nothing but empty boxes. And sometimes, as in a recent case in New Zealand, it might be something horrific.

On August 11, 2022, after trying their luck by bidding on abandoned storage items in an online auction, a family in Auckland brought home their unknown winnings. They hoped to find something of value. What they found instead, crammed into suitcases, were the remains of two young children, between roughly five and ten years of age.

Authorities were called to the scene, and investigators say the remains have likely been in the suitcases for several years. Although their names have not been released, the children have been identified. After a South Korean woman was linked to the victims, the Korean National Police Agency became involved in the ongoing investigation.[1]

9 Cali in the Cage

In another horrific case involving a child, the remains of five-year-old Cali Anderson were found in a plastic drum in a Sacramento storage unit in May 2018. The police say Cali had died approximately two weeks before her body was discovered. In an arrest affidavit, Anderson’s stepmother said the little girl was experiencing health problems, but since she wasn’t her own child, she didn’t get her any medical attention.

When Cali died, her body was placed in a duffel bag, hidden in a closet, and finally moved to the storage unit. When the police investigated the child’s home, they found handcuffs in an animal crate, along with clothing belonging to the girl, hinting that little Cali’s short life had been a very tragic one.[2]

8 No Show of Respect

While storage units have been used many times by killers trying to hide evidence, sometimes the remains are of people who died of completely natural causes. The crimes perpetrated against them and their families instead occurred after death by the very people trusted to handle their remains with dignity and care.

In one such case, the winner of a storage auction in Rhode Island was shocked to find the bodies of two adults and one infant in his unit. The remains of the adults were so decomposed their gender could not be determined, while the infant, found in a small coffin, was thought to be a female. The unit had been rented by funeral home operator Alfred Pennine of Providence. Dozens more sets of remains were discovered in the funeral home he operated. Once his crimes began to come to light, Pennine committed suicide.[3] 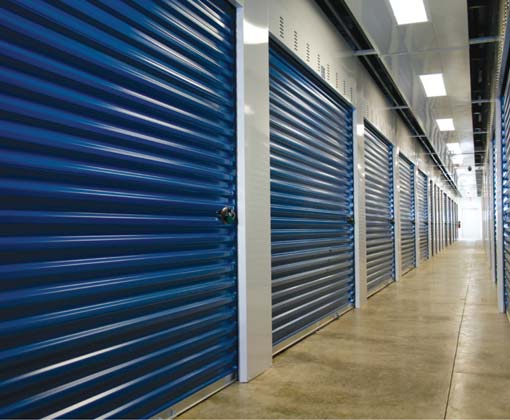 In some cases, it is not criminal activity that results in human remains being found in storage but merely time and tragedy. In early 2022, storage auction winner Bob Blank stumbled across the story of a forgotten military veteran. While looking through items he had won from the auction, he found a sealed box with cremated remains, along with other documents, including a letter from former President Ronald Reagan. A death certificate and Army discharge documents said the remains belonged to a World War II veteran. Two medals indicated he had been a heroic one.

Decorated soldier George Ralph Brady died in 1984 at the age of 59, and his ashes were stored in a cardboard box for 38 years. Determining that Brady had no living relatives, the American Legion performed a burial service with an honor guard and a flag line. The once-forgotten veteran’s remains now lie at the Riverside National Cemetery in California.[4]

6 Work Goes up in Flames 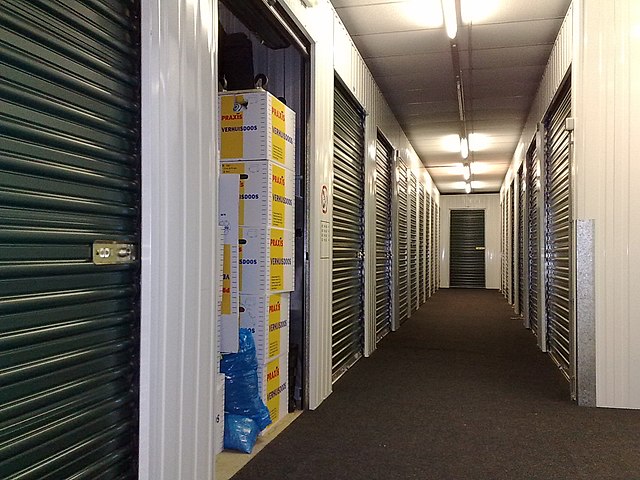 Although most people use storage units to secure their personal belongings, some also use them to work on their own property. Unfortunately for a man in Russellville, Alabama, doing repairs on an automobile might have been responsible for his death.

On January 14, 2022, emergency workers responded to a fire at a storage facility. Initial reports about the number of units involved varied, but they all claimed one thing: that a dead body was found inside one of them. Subsequent reports said the unnamed man was known to have rented several units in the facility and that he often worked on vehicles in them. Authorities speculate the victim might have been using an alternative heat source that could have sparked the blaze. No foul play was suspected.[5]

Money has always been a powerful motivator for murder, and hiding a victim’s remains while continuing to rob them is not as rare as one would hope. In one such case in Las Vegas, the bodies of an elderly couple were hidden in trash bins for ten years while their killer stole their Social Security income. The remains were found in a unit at All Storage at the Lakes in 2015, but the last time Joaquin and Eleanor Sierra were seen alive was in 2003.

Their killer, Robert Dixon Dunn, had apparently met them at a nursing home where his own mother was living. After killing them, he succeeded in stealing from them for all those years by moving around the country and using a fake name. After someone reported him for suspected fraud, he was finally caught. His ex-wife said Dunn claimed he was concealing the bodies of his aunt and uncle, who had committed suicide. In truth, the bodies were found to contain drugs and injuries caused by a sharp object.[1]

4 A Bug Reveals All

SOLVED: The “Witch” Who Almost Got Away With Murder

That lure of money does not just attract evil strangers to potential victims. Violence within families is not uncommon, sometimes between spouses or between siblings. And sometimes between parents and children. In 2001, police in Las Vegas accused Brookey Lee West of killing her own mother and hiding the remains in a trash can in a storage unit. The remains of Christine Smith, 68, were discovered after reports of a foul odor caused the police to seek a search warrant.

The unit, which also contained many of Smith’s belongings, had been rented by her daughter, though she had used a different last name. During the trial, it seemed possible the murderer might evade justice because the remains were so decomposed that the coroner could not determine a cause of death. West said her mother died of natural causes, and the coroner could not absolutely refute that. But in a surprising twist, an entomologist was able to prove the case for murder. Dr. Neal Haskell testified that the absence of blow flies on the corpse proved she had been put in the can either while she was still alive or immediately after death. West was found guilty and sentenced to life in prison with no possibility of parole.

In an interesting footnote, Brookey Lee West returned to the headlines when she tried to escape from prison. Although wearing a disguise, West was spotted and recognized by staff right before she reached the prison exit.[7] 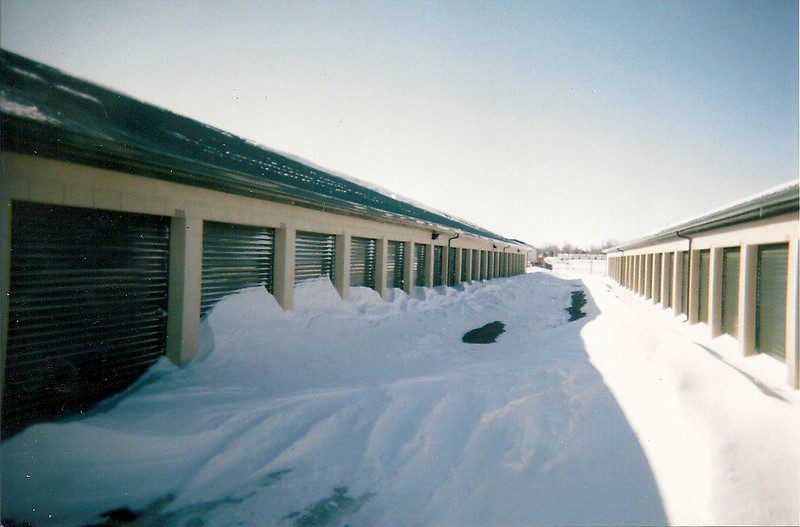 Even when murder is not involved, the lure of money can cause some people to do unimaginable things. After her father apparently died from natural causes in June 1990, Judith Maria Broughton concocted a plan to steal his Social Security benefits, beginning in 1997. Leasing a storage unit at Econo Self Storage in Lexington, Kentucky, Judith stored the body there and kept collecting her father’s retirement funds.

On January 8, 2014, authorities discovered the mummified remains of Luther Broughton and charged Judith with the theft of nearly a quarter-million dollars. After pleading guilty to the theft, Judith was sentenced to ten years in prison.[8] 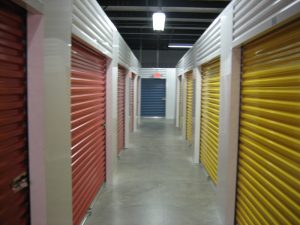 It’s not always murder, and it’s not always money. Sometimes remains discovered in storage units were kept there due to family secrets, psychological disorders, and grief. After her death by natural causes in 1995, Ann Bunch’s body was released to her family for burial. Family members built a casket, domed so the old woman’s hump would fit inside. It was painted blue and loaded into a family van to be transported to Alabama for burial. But the body never got there.

On her deathbed, Ann’s daughter, Barbie Hancock, confessed to her own daughter, Rebecca Fancher, that the remains were in unit B8 of U-Stor. Although Hancock claimed the burial had been delayed because of bad weather and truck problems, family members say otherwise. Fancher’s ex-husband claims his former mother-in-law couldn’t deal with her mother’s death and that her hoarding compulsion made her keep the body nearby—possibly even in her own home before it was moved to U-Stor. Hancock and Fancher’s hoarding eventually led to their house being declared uninhabitable.[9]

One of the most disturbing instances of remains found in a storage unit would have to be the case of Jessica Rey. On October 20, 2017, Rey gave birth in a Kansas City, Missouri, hotel room. Her husband, Justin, claims she died after the child’s birth, saying at one time that she had committed suicide and at another that Jessica died of natural causes. In any case, Justin spent two days in the room with the corpse, the newborn infant, and the couple’s toddler. Then, in the presence of his children, he dismembered Jessica’s body, put the parts in a cooler, and took it to a U-Haul storage facility. Alarmed by his suspicious behavior, facility workers called the police.

Authorities found Rey in the storage unit—where he might have stayed for a few nights—with his two small children and his wife’s dismembered remains. Faced with charges of endangerment of a child and sexual exploitation of a minor for photos found on his phone during the investigation, Rey was convicted and sentenced to nearly nine years in prison. He remains under investigation in a separate murder case in California.[10]