Have you ever wondered why someone who lived over 100 years ago looks like your twin? Well, it’s more common than you think, and science has been delving into the doppelganger mystery. So today we give you celebs that share eerily similar mugs with strangers from yesteryear.

The following is a list of today’s well-known, elite celebrities and the mysterious photos unearthed of what seems to be near carbon copies of them from different points in our history. And many of the images are dated well over 100 years. Whether it happens to be a long-lost family member that somehow was knocked out of the family tree or perhaps a more illogical, fantastic reason for the occurrence, we may never know. 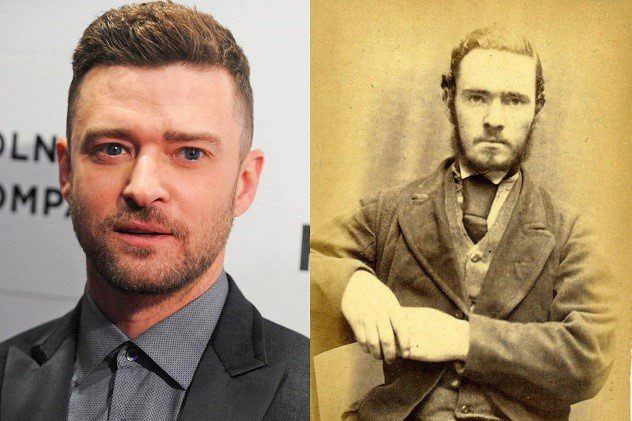 The uncanny resemblance, to say the least, between JT and this man depicted in an image from the 1870s is freakishly similar. There’s no name for this mystery man; however, I’d be willing to bet that they might share the same DNA. Supposedly a miner from Liverpool, this formal photo was his mugshot. I wonder if this criminal was aware that committing crimes was a bad idea because “what goes around, comes around.” As for Justin, he’s avoided the criminal justice system over the years.[1]

Our next celebrity look-alike is Nicolas Cage and this dapper gentleman from the 1860s. Like the previous entry, there is no concrete identifying information for the gentleman in the photo, although he is thought to be a Civil War soldier. Other than that, his identity is a big fat unknown. As for Cage, well, there have been rumors about him, including a bizarre theory that he’s a bloodthirsty vamp. I don’t know about all that; however, these two men look shockingly identical to one another. Maybe he is an undead vampire after all![2] 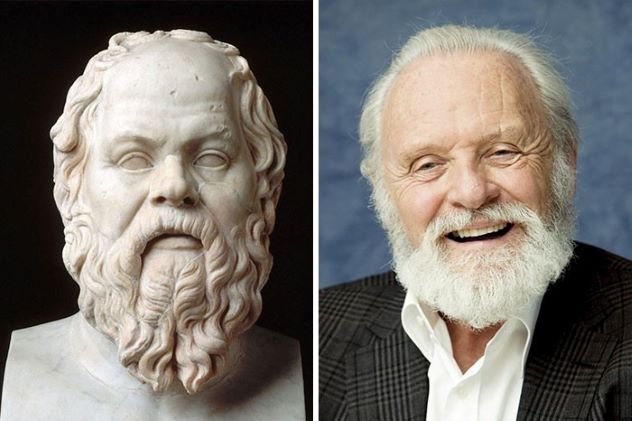 This entry on the list is a tad bit different from the others because acclaimed actor Anthony Hopkins resembles a stone bust of the Greek philosophical powerhouse Socrates, who was believed to live somewhere around 467-399 BC. Although he wrote nothing in his life, according to scholars, he is still considered to be one of the greatest, most impactful philosophers in history. In today’s day and age, he would have had TikTok on lock, trending with his different views on various subjects.

You can see these fellas have similar button noses and wild beards. You can see why people tend to make the comparison. I wonder if Anthony Hopkins will ever play this toga-wearing, ancient Greek symbol.[3] 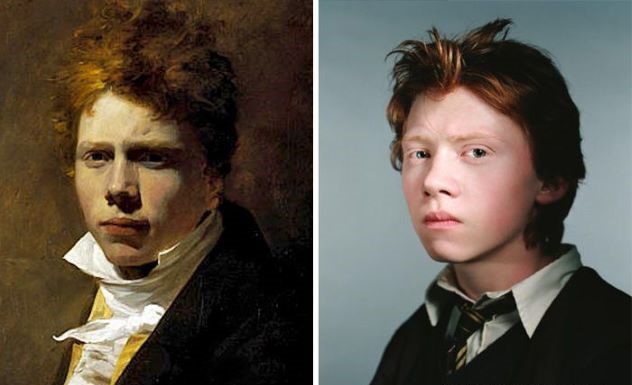 This is an unbelievable find! These two men’s facial features are so similar it’s eerie. The man on the left is none other than Rupert Grint, aka Ron Weasley from the Harry Potter movie franchise. The man on the right is Sir David Wilke, a Scottish painter born in the 1780s.

He painted historical scenes and locations from his travels abroad. He was appointed Painter to the King in 1830 and knighted in 1836. I mean, these two guys look like they could be twinning it. It’s a truly incredible resemblance.[4] 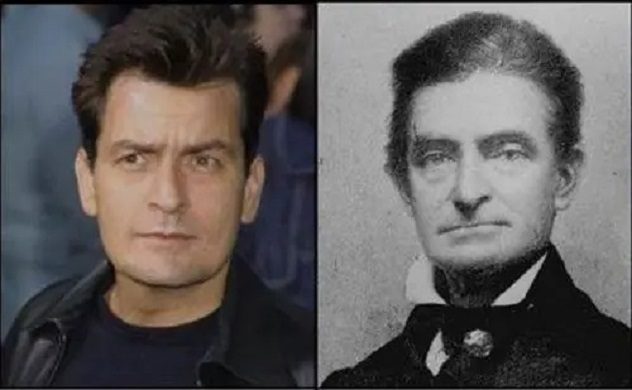 Here is yet another example of the odd occurrence of a doppelganger. This time we are met with Charlie Sheen—everybody’s favorite alcoholic uncle, Charlie Harper, from the sitcom Two and a Half Men and abolitionist John Brown. John Brown was executed for treason after a failed attempt to rescue slaves at Harper’s Ferry in 1879.

Whether you’re a believer in odd and unexplained occurrences or take the more sensible, logical stance, at the very least, seeing how closely matched their features still makes for a pretty interesting blurb.[5] 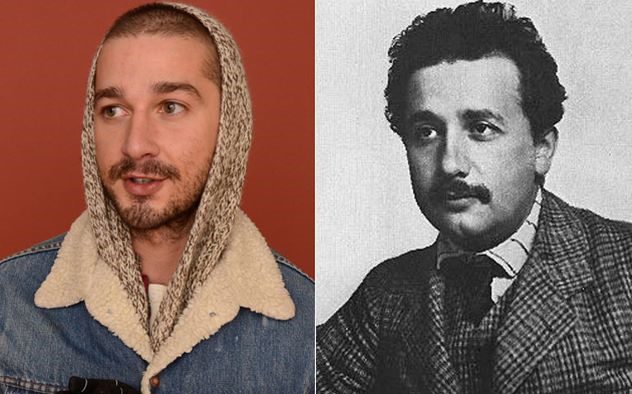 This entry is pretty hard to dismiss as anything other than remarkable. A young Albert Einstein looks like he could be a direct ancestor of Mr. LaBeouf. It may even be something that the scientific community in recent years has said to be more than just a mere coincidence. It’s downright likely that these two men do share the same DNA. Strangely enough, even a superfan of Shia’s thinks he’s the famed physicist—so much so that the actor had to file a restraining order!.

That is one distant relative I wouldn’t mind adding to my family tree. However, those shoes would be some big ones to fill, being that Einstein is only the father of modern physics. I don’t think I could deal with that kind of pressure![6] 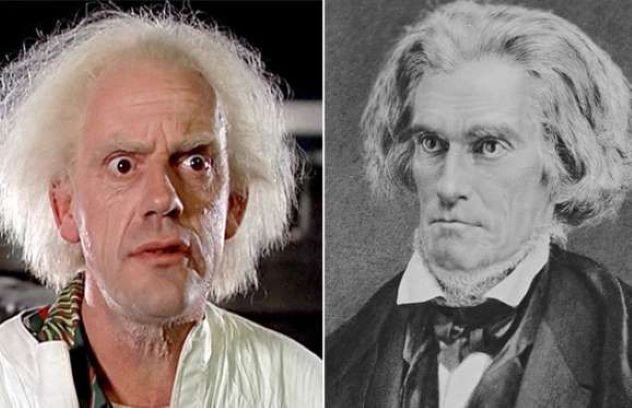 Another very interesting facial match that is making people scratch their heads, wondering if perhaps there is a time-traveling DeLorean carting celeb back to the future… because this has time travel written all over it. Back to the Future actor Christopher Lloyd bears a striking resemblance to John C. Calhoun, a vocal statesman from South Carolina. Among many other positions he held, Calhoun was the seventh vice president of the United States (1825–1832).

The side-by-side comparison reveals the number of links between the two, so many to wave off as a strange coincidence… perhaps a distant relative, or, is he in fact, a time traveler?[7] 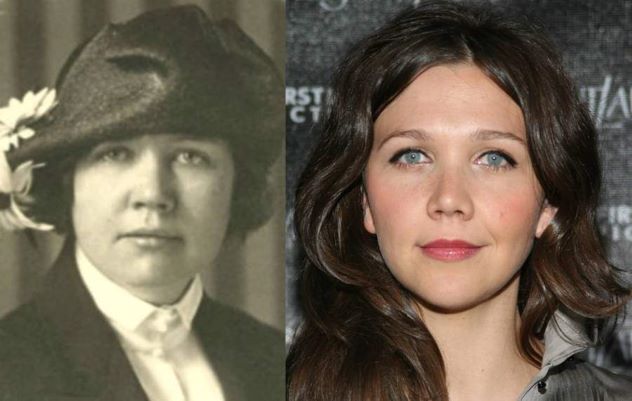 This well-known actress Maggie Gyllenhaal, older sister to heartthrob Jake, has done wonderful things in Hollywood throughout her career. She also has a doppelganger that fought for women’s rights in an era when the idea of activism was, well, less than popular, especially for women in the early 1900s.

Rose Wilder Lane was a leader among her fellow activists in her time. She was a strong supporter and was responsible for helping women win protection over their civil rights from the U.S. government. Lane was considered a respected leader of the Suffrage Movement, which earned American women the right to vote. You go, girl! Lane was also the daughter of author Laura Ingalls Wilder of Little House on the Prairie fame.

As for Maggie, it seems she, too, is a political activist, sharing in the belief that this country is part of a global society and that her parents taught her how important it was to radicalize if necessary, fight for what is right, and stand up for people who don’t have any real representation.[8] 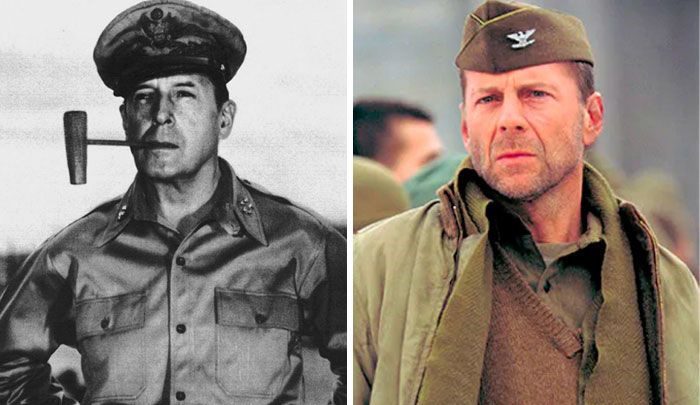 Occupationally, Bruce Willis and General MacArthur are two men who couldn’t be further apart. However, if we’re comparing their grimacing stares, it’s apples to apples all day! Although Bruce has portrayed his fair share of militant characters, he has yet to don the role of General MacArthur, who won several medals for his heroic service in World War II.

There have been other action stars to take on the role, but who knows, maybe you’ll get to see Bruce get his turn to bring this well-known and well-respected man back to life on the silver screen.[9] 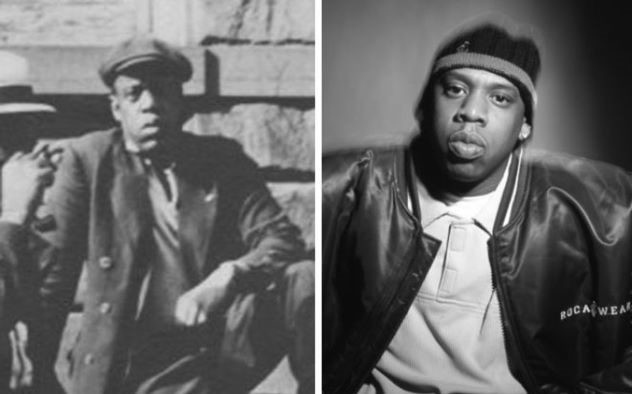 This photo sparked a rumor that this multi-millionaire, owner of ROC record label, home to high-profile artists like Kanye West, could travel back in time. This rumor spread across the internet due to the mirror-like manner in which the pair of these men look. They seem to share more than just facial expressions, but also the sense of swagger and the posing of their body language.

Like Jay-Z needs to add any more rumors to the list. Over the years, he has picked up quite a few, including that his wife wasn’t pregnant with their daughter Blue to whispers of the couple being wrapped up with secret societies.

This one, however, is a bit more laughable and worthy of poking fun at. As for the man in the photo, not much is known about him, other than he likely lived in or around Harlem, New York, in the 1930s, which is where Jay-Z hails from as well. Is this just a case of coincidence or something sci-fi movies are made of?[10]