From the contributor: “I’ve worked as an audio-engineer for more than 15 years, and it’s still baffling that colleagues all over the world seem to gravitate to the same old microphones as soon as they can lay their hands on them. This list doesn’t cover studio recording, since condenser mics are more common there (if the budget allows it). But the rough fuzz live on stage requires more robustly designed mics in both mechanical and acoustic concerns.” If you are planning on starting a band, or already have one, this list will be invaluable. In no particular order: 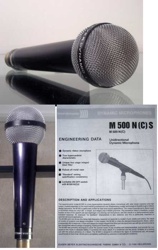 A very cheap all-purpose ribbon mic, which was preferably used as vocals mic back in the days when vocalists had actually to sing more than following a strict choreography. Seems to be out of stock now, but is still very common. Intended successor seems to be the TG-X 48 but it is not that famous at all.

Microphone in need of some repairing? Get some Auray Foam Windscreen for 1-5/8″ Diameter Microphones at Amazon.com!

Basically the better version of the M500, and a dynamical mic. Vocalists liked to give the mesh grille an ‘accidental’ dent, so the voice sounded more bassy (also true for the M500). That is, the nearer the sound source is to the actual mic membrane, the more bass you get out of it. So even someone with a Tweety voice could bring some volume (richness) to the mixer. 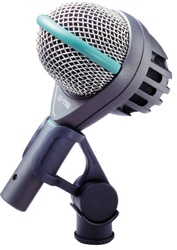 If you’ve seen this one you had a very good view to the drumset, since it is mostly used for the bass drum, and in fact most of the time inside the bass drum. The ugly turquoise ring was black in earlier incarnations, but at some time AKG decided to color it. One reason more to bury it inside the drum.

Again a drumset mic, this one is used for the snare drum and also for the hi-hat sometimes. It’s dimension allows to place it quite near to the instrument without spoiling the actual arrangement of the drumset too much, and its hypercardioid pick-up pattern causes a minimum of interfering with other drums of the set. One of the few condenser mics regularly used on stage. It is also robust enough to cope with the occasional misplaced drumstick, due to its unique suspension. Don’t try to verify this while using earphones.

To cover the prominent overhead mics for the drumset is not that easy. You need something which is not too heavy, gets high frequencies in a relatively big distance, and still won’t trouble you with feedback. So most of the time you see simple tubular forms (don’t change by mistake with valve or tube based electric entrails). The M201 is a classic one.

Become your own rock star with a Beyerdynamic M201 TG Classic Dynamic Hypercardioid Microphone at Amazon.com! 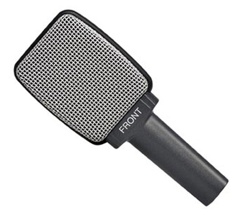 This one is used in front of all kinds of electrical guitar amplifiers. Why does an electrical guitar need a mic, you may ask. Since the amplifier (and all the stuff the average guitar player has on the floor to kick when needed) defines the guitarist’s sound most prominently you don’t wire the guitar directly to the mixer. After all you want to enhance the ‘original’ sound, not rebuild it from scratch. The e906 is the big brother of the e606, they hardly differ in appearance and usage. 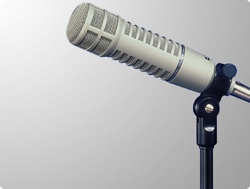 The RE20 has many nicknames, most of them are only funny if you’re an eleven year old boy, or very, very drunken. This one is used as a bass drum mic quite frequently, but you’ll actually see it very often to pick up brass instruments. Its membrane has a quite big diameter regarding the fact that it is a dynamic microphone, usually mics with big membranes are condensers, and not used on stage. Surprisingly the RE20 is extremely tough when it comes to plopping and slushing sounds, so it is also used in broadcast stations as moderator mic. Its frequency range is a bit limited, since the big membrane doesn’t transport high frequencies above appr. 12kHz that good. If there’s a choice for another mic for your brass section’s trumpet player (see below) use the RE20 for everything else, like trombone, tuba, euphonium and saxes. 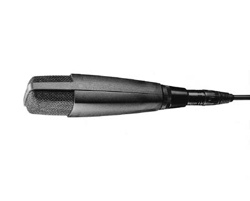 This is a true allrounder for almost everything, including field-reporting (for which it was designed originally). Forget about that switch where the plug is. You could set some predefined equalizer settings there varying from ‘S’ for speech to ‘M’ for music in five grades, but you want to set equalizers at the mixer, not at the mic, so let it at ‘M’. It shares usability with its successor, the MD441, but since it has a cardioid sensing characteristic you need to place it a bit closer to the sound source to avoid feedback.
It’s capable to pick up vocals, but the ergonomic design and weight are a drawback here. Most vocalists are also disturbed by the grille enhancement (and you can hardly dent it without actually damaging the mic). 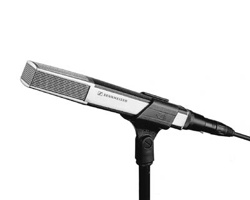 Originally designed also as reporter mic, and in that case for more tricky environments with lots of background noise than its precursor (the MD421), the MD441 was established as brass mic quickly. It would be the choice for your aforesaid trumpet player, if available. You could set up a complete R&B stage with MD441 mics, but at the snare drum it would be a bit too big … Its hypercardioid frequency sensing characteristics even allows using two as overhead mics, but you need sturdy stands then, since the MD441 is comparably heavy. It is also usable for vocals, but since it is big, heavy and, well, some people call it ugly, you won’t see it often here. 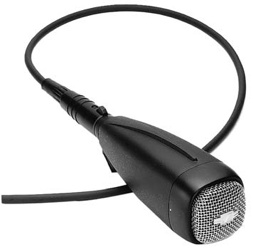 It is the grandfather of modern dynamical reporting microphones, at least in central europe. Since it has an omnidirectional, spheric pick-up pattern it is hardly of any use on stage. On the other hand, there are lots of anecdotes on the lines of ‘if you’re in the need of a hammer the MD21 will suffice’, which are true to some extent. Don’t set your lawyers on me if it gets damaged while you try to repair your house’s roof with it.

Top 10 Most Notorious Metal Bands Ever