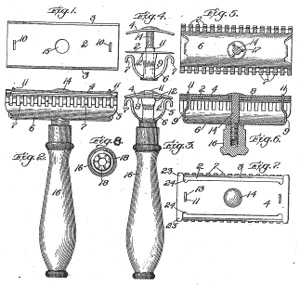 Prior to the invention of the safety razor, most men used a straight razor – a bare blade that takes skill to use. In the late 18th century, Jean-Jacques Perret, inspired by a joiner’s plane, invented the first safety razor. Perret was an expert on the subject and he even wrote a book on in it: “Pogonotomy or the Art of Learning to Shave Oneself”. From the 1820’s onward, a variety of companies began manufacturing their own style of safety razor (though many of these would not be considered a safety razor by today’s standards). In 1875, the Kampfe brothers released the first American version; this razor featured a wire skin guard on one side of the blade, which required removal for sharpening. In 1901, King Camp Gillette (an American inventor) invented the first safety razor with disposable blades. Gillette, being a shrewd businessman, realized that selling the razors at a loss and making money on the disposable blades could make a far greater profit. This method of marketing is called the Razor and Blades Business Model, or a “loss leader”. In 1903, his first year of selling the device to the public, Gillette sold 51 razors and 168 blades. 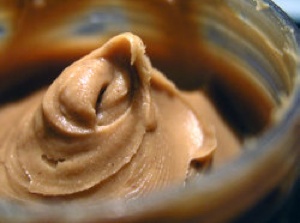 First off, let us dispel a myth: George Washington Carver did not invent peanut butter! Peanuts were first ground in to a paste by the Incas, but the tradition eventually vanished. It was not until 1890 that the first modern use of peanut butter came about. George A. Bayle produced the paste and sold it as a protein supplement for people with bad teeth. In 1893, Dr. John Harvey Kellogg created a forerunner of the peanut butter, as we know it today – though his recipe used steamed, rather than roasted, peanuts. Peanut butter was widely introduced to the United States in 1904, by C.H. Sumner at the Louisiana Purchase Exposition (Saint Louis World’s Fair) which also popularized the ice cream cone, the hot dog and the hamburger. In 1922, Joseph L. Rosefield developed modern peanut butter by using finer grinding, hydrogenation, and an emulsifier to keep the oil from separating. This created a creamy texture unlike the earlier peanut butter described as gritty, or pasty. He received a patent for stable peanut butter that had a shelf life of up to a year. 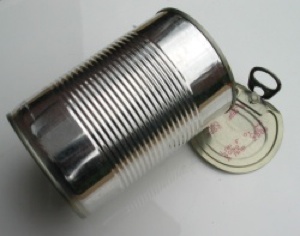 British merchant Peter Durand made an impact on food preservation with his 1810 patenting of the tin can. In 1813, John Hall and Bryan Dorkin opened the first commercial canning factory in England. The first tin cans were so thick they had to be hammered open. As cans became thinner, it became possible to invent dedicated can openers. In 1858, Ezra Warner of Waterbury, Connecticut patented the first can opener. The U.S. military used it during the Civil War. In 1866, J. Osterhoudt patented the tin can with a key opener that you can find on sardine cans. The inventor of the familiar household can opener was William Lyman. William Lyman patented a very easy to use can opener in 1870, the kind with the wheel that rolls and cuts around the rim of a can. The Star Can Company of San Francisco improved William Lyman’s can opener in 1925 by adding a serrated edge to the wheel. 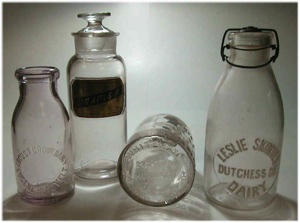 The New York Dairy Company is credited with having been the first company to mass-produce glass bottles for the distribution of milk. Prior to that, milkmen would fill a customers own jugs with milk; unpasteurized milk was delivered up to four times a day due to its short shelf life. The first patents for the Lester Milk Jar holds a milk container on January 29, 1878. Lewis P. Whiteman holds the first patent for a glass milk bottle with a small glass lid and a tin clip (US patent number 225,900, filed on January 31, 1880). The next earliest patent is for a milk bottle with a dome type tin cap and was granted September 24, 1884 to Whitemen’s brother, Abram V. Whiteman (US patent number 305,554, filed on January 31, 1880). 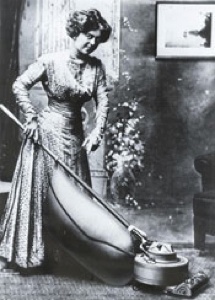 The first manually powered cleaner using vacuum principles was the “Whirlwind”, invented in Chicago in 1868 by Ives W. McGaffey. The machine was lightweight and compact, but was difficult to operate because of the need to turn a hand crank at the same time as pushing it across the floor. McGaffey obtained a patent for his device on June 5, 1869, and enlisted the help of The American Carpet Cleaning Co. of Boston to market it to the public. It was sold for $25, a high price in those days. It is hard to determine how successful the Whirlwind was, as most of them were sold in Chicago and Boston, and it is likely that many were lost in the Great Chicago Fire of 1871. Only two are known to have survived, one of which can be found in the Hoover Historical Center. 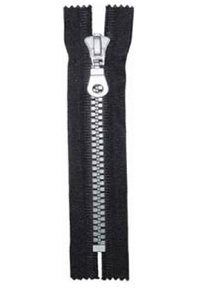 An early device superficially similar to the zipper, “an Automatic, Continuous Clothing Closure”, was patented in the United States by Elias Howe in 1851. Unlike the zipper, Howe’s invention had no slider; instead a series of clasps slid freely along both edges to be joined, with each clasp holding the two sides together at whichever pair of points along them it was located. The true zipper was the product of a series of incremental improvements over more than twenty years, by inventors and engineers associated with a sequence of companies that were the progenitors of Talon, Inc. This process began with a version called the “clasp locker”, invented by Whitcomb L. Judson of Chicago (previously of Minneapolis and New York City), and for which a patent (No. 504,038) was first applied for on Nov. 7, 1891. It culminated in 1914 with the invention, by Gideon Sundback, of the “Hookless Fastener No. 2”, which was the first version of the zipper without any major design flaws, and which was essentially indistinguishable from modern zippers. 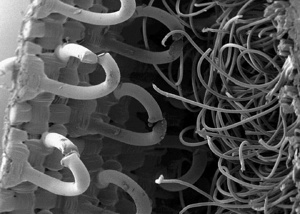 Swiss engineer, George de Mestral, invented the hook-loop fastener in 1948. The idea came to him after he took a close look at the Burdock seeds that kept sticking to his clothes and his dog’s fur on their daily summer walks in the Alps. He examined their condition and saw the possibility of binding two materials reversibly in a simple fashion. He developed the hook and loop fastener and submitted his idea for patent in 1951. It was then granted in 1955. De Mestral named his invention “VELCRO” after the French words velours, meaning ‘velvet’, and crochet, or ‘hook’. The uses and applications of the product are numerous. 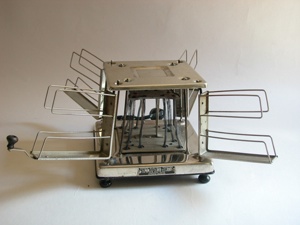 Prior to the development of the electric toaster, sliced bread was toasted by placing it in a metal frame and holding it over a fire or by holding it near to a fire using a long handled fork. Crompton and Company, Leeds, England invented toasters for bread using electricity in 1893. The technology that makes electric toasters possible, a nichrome wire that can endure high heat, has existed for a long time. At least two other brands of toasters had been introduced commercially around the time GE submitted the first patent application for their model D-12 in 1909. In 1913 Lloyd Groff Copeman and his wife Hazel Berger Copeman applied for various toaster patents and in that same year the Copeman Electric Stove Company introduced the toaster with automatic bread turner. The company also produced the “toaster that turns toast.” Before this, electric toasters cooked bread on one side and then it was flipped by hand to toast the other side. Copeman’s toaster turned the bread around without having to touch it. Copeman also invented the first electric stove and the rubber (flexible) ice cube tray. 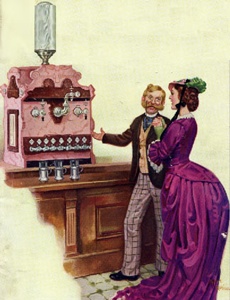 Soft drinks trace their history back to the mineral waters found in natural springs. Ancient societies believed that bathing in natural springs and/or drinking mineral waters could cure many diseases. The first marketed soft drinks (non-carbonated) appeared in the 17th century France. They were made from water and lemon juice sweetened with honey. In the 1770s, scientists made important progress in replicating natural mineral waters. Englishman Joseph Priestley impregnated distilled water with carbon dioxide. Another Englishman, John Mervin Nooth, improved Priestley’s design and sold his apparatus for commercial use in pharmacies. Artificial mineral waters, usually called “soda water,” and the soda fountain made the biggest splash in the United States. Beginning in 1806, Yale chemistry professor Benjamin Silliman sold soda waters in New Haven, Connecticut. He used a Nooth apparatus to produce his waters. The American pharmacists selling mineral waters began to add herbs and chemicals to unflavored mineral water. They used birch bark, dandelion, sarsaparilla, fruit extracts, and other substances. Flavorings were also added to improve the taste. Pharmacies with soda fountains became a popular part of American culture. 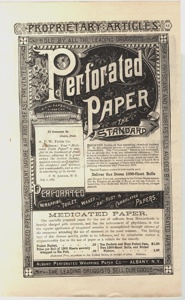 Although paper had been known as a wrapping and padding material in China since the 2nd century BC, the first use of toilet paper in human history dates back to the 6th century AD, in early medieval China. During the later Tang Dynasty (618–907 AD) a Muslim Arab traveler to China in the year 851 AD remarked:

“[The Chinese] are not careful about cleanliness, and they do not wash themselves with water when they have done their necessities; but they only wipe themselves with paper.”

During the early 14th century (Yuan Dynasty) it was recorded that in modern-day Zhejiang province alone there was an annual manufacturing of toilet paper amounting in ten million packages of 1,000 to 10,000 sheets of toilet paper each. The first producer of ‘perforated’ toilet paper was the British Perforated Paper Company in 1880. Other forms of non-perforated toilet paper were available the same time and earlier, notably from the Scott brothers (Scott Paper Company) and Joseph Gayetty. Before this invention, wealthy people used wool, lace or hemp for their ablutions, while less wealthy people used their hand when defecating into rivers, or cleaned themselves with various materials such as rags, wood shavings, leaves, grass, hay, stone, sand, moss, water, snow, maize husks, fruit skins, or seashells, and cob of the corn depending upon the country and weather conditions or social customs. I will close this list with a wonderful quote by François Rabelais, the sixteenth century satirist who considered the back feathers of a live goose to be the ideal medium for this job:

“He who uses paper on his filthy bum, will always find his bullocks lined with scum”

This article is licensed under the GFDL. It uses material from the Wikipedia articles: The Vacuum Cleaner, Zipper, Velcro, Toaster, Soft Drink, Toilet Paper