In 1827, Switzerland’s Rudlophe Topffer created a comic strip and continued on to publish seven graphic novels. In 1837, Rudolphe Töpffer published “The Adventures of Obadiah Oldbuck” and it is considered the earliest known comic book. Since then the Comic Book has gone on to be one of the most popular printed items in the world. Here are ten moments in history that helped define the ‘Super Hero Comic’ genre. 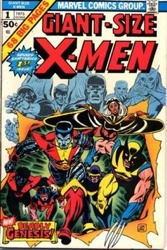 The X-Men are a team of science-fictional comic book characters as super heroes and, occasionally, super villains in the Marvel Universe. Created by Stan Lee and Jack Kirby, they debuted in The X-Men #1, published in September 1963. The X-Men are fictitious ‘mutants’ who, as a result of a sudden leap in evolution, are born with latent ‘superhuman’ abilities, which generally manifest themselves at or very near puberty. In the stories, many ordinary humans harbor an intense fear and/or distrust of mutants (often referred to as Homo superior), who are regarded by a number of scientists as the next step in human evolution and are thus widely viewed as a threat to human civilizations. Though the X-Men, under the tutelage of Professor Charles Xavier, are generally viewed as ‘heroic’, the antithesis would be the ‘evil’ Brotherhood controlled by Xavier’s much more human-mistrusting, Magneto. 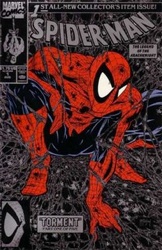 In 1988, Todd McFarlane joined writer David Micheliene on Marvel’s The Amazing Spider-Man. Starting with issue 298; McFarlane changed the character’s appearance, making him more spider-like with bigger eyes, a leaner physique, and contorted body language when web swinging, as well as making his webbing look more detailed and unique. His interpretation would be imitated by many subsequent Spider-Man artists and remains so to this day. McFarlane also helped create Venom, a wildly popular villain. (Director Sam Raimi came to McFarlane for the initial sketches of Venom for the Spider-Man 3 movie) McFarlane’s work on Spider-Man turned him into an industry superstar. 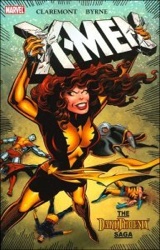 The Dark Phoenix Saga is an extended X-Men storyline in the fictional Marvel Comics Universe, focusing on Jean Grey and the Phoenix Force ending in Grey’s apparent death. It was written by Chris Claremont with art by Dave Cockrum and John Byrne. It is sometimes divided into two parts; with the Phoenix Saga (X-Men [vol. 1] #101-108, 1976-77) referring to Grey’s seeming assumption of the power and repair of the M’Kraan Crystal and the Dark Phoenix Saga (X-Men vol. 1 #129-138, 1980) to her corruption and fall. It is one of the most well-known and heavily referenced comic stories, and widely considered a classic.

7. Darkseid Versus The Legion of Super Heroes 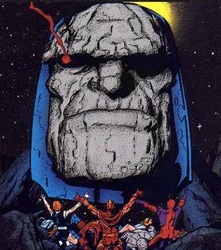 Though ultimately thwarted by the combined might of every superhero in the 30th century—including time-travelers Supergirl and Superboy—Darkseid got the last laugh as he cursed the LSH thusly: “That which is purest of you shall be the first to go!” The ruler of Apokolips made good when he kidnapped one of Lightning Lad and Saturn Girl’s twins, went back in time with the child and transformed him into the monstrous Validus, one of the Legion’s greatest foes! 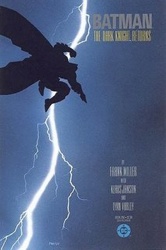 This cover, along with Watchmen #1 (which was released six months later in September of 1986), seemed to denote a sea change in how comics were marketed and sold to the public, and indicated a greater reliance on an older and more sophisticated audience. Now over 15 years old, this cover has been lampooned, parodied, swiped, stolen and reproduced probably more than any other image of the era. It a simple composition, but one with tremendous mood and intrigue. Miller imparts a remarkable amount of information with this minimalist composition, relying on the iconic silhouette of Batman to carry the narrative weight of the cover. This, along with Batman’s first Detective Comics appearance, are nearly tied and hugely significant to the genre. 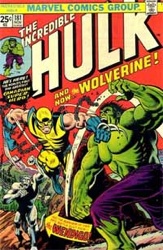 Published in November 1974, Hulk 181 was written by Len Wein and illustrated by Herb Trimpe. The comic featured the debut of the animal-themed character, ‘Wolverine’. Originally created as a throwaway character for an adventure in Canada, Wolverine had a very brief introduction in Incredible Hulk #180. It was this cameo that was considered his first true appearance for quite some time. Sometime within the last ten years the issues flip-flopped and Hulk 180 was knocked down to cameo status. In 1975 Wolverine appeared in Giant-Size X-men #1 as a new team member. Over the next decades his popularity and legend grew until he was starring in his own mini-series and eventually a solo title in 1988. 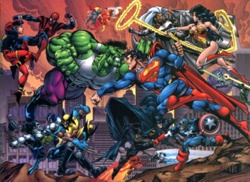 Two entities who are brothers, personifying the DC and Marvel comic universes, become aware of each other’s existence. They challenge each other to a series of duels involving each universe’s respective ‘best’ superheroes, with the losing universe ultimately ceasing to exist. There are eleven primary battles between the heroes, with the outcome of five fights being determined by ‘fan votes’. Marvel eventually receives more votes than DC, although the storyline does not show one side as being victorious. The “brothers” resolve the situation by temporarily creating a new universe, called the ‘Amalgam Universe’, which is occupied by merged versions of many of the heroes, such as Dark Claw— a unity of DC’s Batman and Marvel’s Wolverine. An inter-dimensional traveler called ‘Access’ eventually manages to restore the universes to their original and sound states. In 1997 the miniseries won the Comic Buyers Guide Fan Award for Favorite Limited Series. 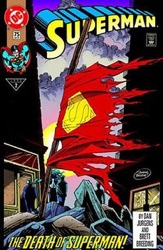 The Comic that served as the catalyst for DC Comic’s crossover event of 1993. The completed multi-issue story arc was given the title “The Death and Return of Superman”. The trade paperback version is the best selling graphic novel of all time. The storyline’s premise is as simple as its title: Superman engages in battle with a seemingly unstoppable killing machine named Doomsday in the streets of Metropolis. At the fight’s conclusion, both combatants die from their wounds. Eventually, after four new heroes appear in Superman’s stead, the Man of Steel does return to reclaim his rightful position. 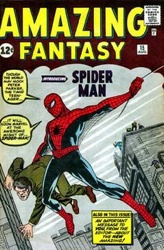 With issue #15 (August 1962) Amazing Adult Fantasy was renamed Amazing Fantasy and slated for cancellation. With nothing to lose, publisher Martin Goodman agreed to allow Lee to introduce Spider-Man, a new kind of Superhero — one who would be a teenager, but not a sidekick, and one who would have everyman doubts, neuroses and money problems. Sales for Amazing Fantasy #15 proved to be one of Marvel’s highest at the time and The Amazing Spider-Man was quickly launched to capitalize on the new character’s apparent popularity.

Amazing Fantasy #15, as the debut issue of Marvel’s most popular character, is, among fans and collectors, one of the most important and valued comic books in the history of the medium. 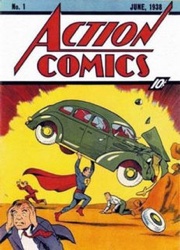 Action Comics is the American Comic Book series, which introduced Superman, the first major ‘Superhero character’ as the term is popularly defined. The company, after several name changes, would go on to become DC Comics. Jerry Siegel and Joe Shuster saw their creation, Superman, AKA Kal-El (originally Kal-L), launched in Action Comics #1 in April 1938 (cover-dated June). (Approximate present-day value (In “near mint” condition): $1,380,000 USD.). Superman permanently changed the medium of comic books and strips by formalizing a new fantasy subgenre.