“Death -oh- Death”. Everybody sing it now. The last cellphone call will be made to us all some day, regardless. Most of us wont know when or where or in what form. The big D has a way of creeping up and surprising the dumbfounded or snatching the innocent. Death can cause howling and screaming or a calm transition into the mysterious hereafter, and sometimes “The Slayer” just seems to ignore what is most obviously a bulls eye. The following list contains ten unbelievable but amazingly true accounts of human beings that beat death. Some of these “cheaters of death” are still among us (as of this posting). In no particular order, here are some of my favorites. 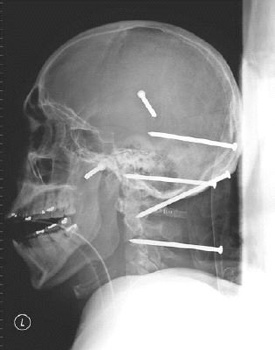 He’s nail free today, but in 2004, Mejia was doing construction work on the roof of a house when he fell. The fall didn’t kill him, but the six 3 1/2 inch nails that accidentally shot into his neck and skull certainly should have. He survived because the nails barely missed his brain stem and spinal cord. 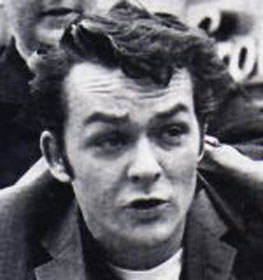 In 1968, the first mafia attempt against this canadian gangster took place. Two hired gunmen entered a bar where he was enjoying some drinks. Although shot at multiple times, Blass was able to escape unscathed.

Two weeks later, Blass was tracked by the mafia in a motel named “Le Manoir de Plaisance”, in a Montreal suburb. The motel was set on fire and three people died, but Blass escaped the blaze. Police investigation indicated arson as the fire’s cause.

In October, Richard Blass was injured by shots to the head and back after being ambushed with his partner inside a garage. The two were able to save their lives by driving through the garage door. Blass required hospitalization for his wounds.

In January, 1969, a bungled bank robbery and a shot cop, put Blass in jail. Within the first year of serving four consecutive terms of ten years in jail, Blass managed to escape. He was caught, thrown back in the slammer, and escaped a second time. With a spurt of freedom, and blood in his eyes, he set out and killed two co-conspirators in a bar, that had testified against him. Everyone else in the bar was locked in and the place set on fire. Three days later, Blass’ death finally came when he was shot 23 times.

During his life Blass was given the nickname, “The Cat”, because of his luck in evading death. 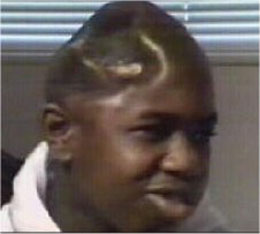 “I try to appreciate things a lot more. You never know what moment you won’t be there.” In 1987, an accidental discharge of a gun blew half of 14 year old Israfil’s brains away, yet he survived and later graduated with honors.

Doctors were able to fill the hole with a silicone block, “the flap of skin was pulled over and hair grew back, giving him a fairly normal appearance.” Cranioplast was used to put the “icing on the cake” (Dayton Daily News) 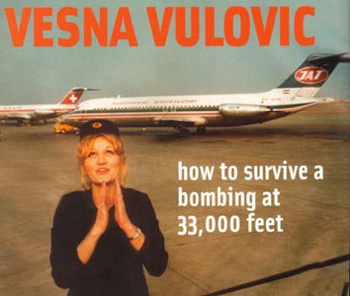 It was 26 days into 1972, when 22 year old flight attendant, Vesna Vulovic found herself at 33,000 feet in the air and quickly descending to the earth without a parachute. JAT Flight JU 367 had been cruising over Srbska-Kamenice (now the Czech Republic) when an explosion occurred (The terrorist group, Croatian National Movement was named as responsible for the deaths of all but one) and as astonishing as it sounds V.V. survived with a “fractured skull, two broken legs and three broken vertebrae, which left her temporarily paralyzed from the waist down. She regained the use of her legs after surgery and continues to fly sporadically” She holds the Guiness World Record for the highest freefall. 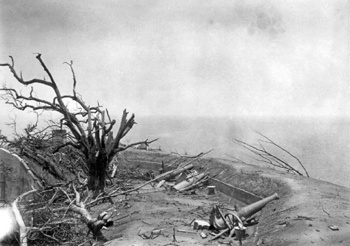 On the day before the Pelee eruption, Sylbaris was locked in a single-cell, partially-under ground with stone walls, ventilated only through a narrow grating in the door which faced away from Pelee. His prison was the most sheltered building in the city, and it was this fact which saved his life.

On the day of the eruption, it grew very dark. Hot air mixed with fine ashes entered his cell through the door grating, despite his efforts in urinating on his clothing and stuffing it in the door. The heat lasted only a short moment, enough to cause deep burns on his hands, arms, legs, and back, but his clothes did not ignite, and he avoided breathing the searing-hot air.

Superheated steam and volcanic gases and dust, with temperatures reaching over 1000 °C. flattened the buildings in the city and the entire population burned or suffocated to death. When I visited beautiful Martinique in 1989, and saw the jail cell, which still stands, Sylbaris was said to be the only survivor, but in fact there was one other man and possibly two children. 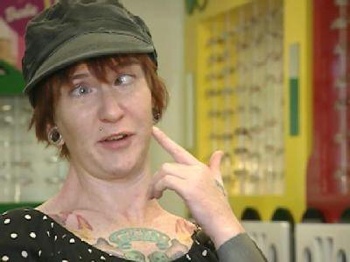 Shannon Malloy was in a car crash that caused her to be internally decapitated; her spine was separated from her skull and all connecting ligaments and tendons were cut loose. Despite this, she managed to survive. Shannon had to endure several surgeries, one “fusing her skull to her spinal cord; she suffered nerve damage that made her eyes constantly cross and limited her speech ability. Her pelvis and ankle were severely broken, but could not be repaired until swelling in the brain and spinal cord reduced” (Associated Content). 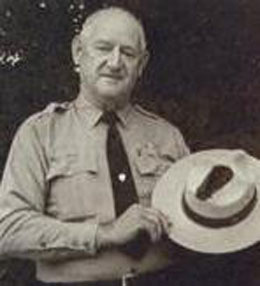 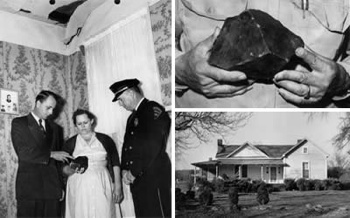 Sylacauga, Alabama 1954. While Hodges was napping on her living room couch, a grapefruit-sized meteoroid crashed through her roof and ricocheted off her large wooden console radio, before it struck her on the arm and hip. She was badly bruised but able to walk. The Air Force arrived and took the meteorite from her. Ann’s husband, Eugene, hired a lawyer to get it back. Then the landlord claimed it, wanting to sell it in order to cover the damage done to the roof. By the time the meteorite was returned to Ann and Eugene (over a year later) public attention had diminished and they were unable to find a buyer willing to pay much for the 8.5 pound alien chondrite rock. Against her husband’s wishes, Ann donated it to the Alabama Museum of Natural History, where it can be seen today. 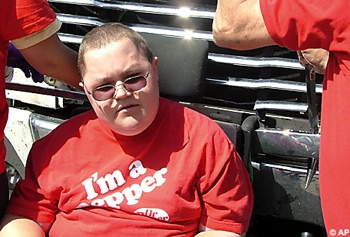 When crossing the street in Paw Paw, Ben Carpenter, 21 years old and wheelchair bound, was “picked up” accidentally by a truck. He was pushed by the semi-truck for 4 miles at 50mph, after the arms of his wheelchair got stuck in the grill. The story goes that the driver had stopped at a red light, and couldn’t see Carpenter crossing in front of him. The light changed and Carpenter ended up having the ride of a lifetime. “What I learned is that I never would want to be a Hollywood celebrity,” he said after all the fuss being made by TV and newspapers. “I don’t know how they do it with the TV cameras and people taking their picture all the time. I went through it, and it was OK for a while, but a couple days was enough.” (Kalamazoo Gazette) 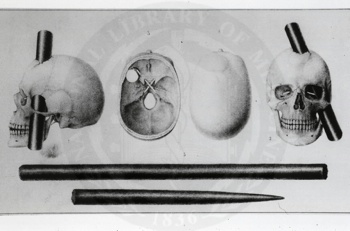 On September 13, 1848, Gage (a railway worker) was packing a hole with gunpowder, adding a fuse and sand, and then packing the charge down with a large tamping iron. The gunpowder ignited and the iron bar shot through his left cheek bone and exited out the top of his head, and was later recovered some 30 yards from the site of the accident. Within minutes he was up and walking. A few days later he had fungus of the brain. A couple of weeks after, 8 fluid ounces of pus from an abscess under his scalp was released. Damage to Gage’s frontal cortex had resulted in a complete loss of social inhibitions, which often led to inappropriate behavior. He was no longer the same Gage that his friend’s and family knew. Today his skull and the iron bar that shot through it are on display at Boston’s Warren Anatomical Museum.