10 Amazing Viking Treasures That Have Been Found

10 Amazing Viking Treasures That Have Been Found

Everyone loves a good swordfight and thankfully there have been an enormous number of movies with brilliant fighting scenes in them. This is a selection of ten of the best from some of my favorite movies. You will definitely not be disappointed by the selection given here.

Remember, if you have your own favorites that you think might deserve a place on this list, be sure to tell us so we can do a follow up at a later date. Be sure to tell us your reasons for your picks.

10
Pirates of the Carribbean
Johnny Depp vs. Orlando Bloom 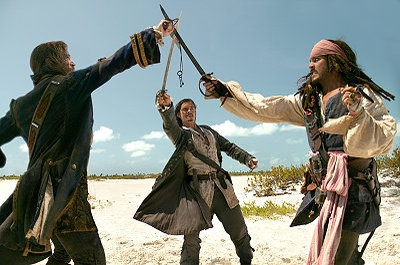 The “Pirates” series may have overstayed its welcome, but the first entry gave us some of the most inspired and thrilling action sequences in recent memory. Like any respectable blood-and-thunder epic, it comes with some mighty fancy swordplay. The high-flying acrobatics of Depp and Bloom strike just the right balance of adventure and comedy. Interestingly, if Depp had played Jack Sparrow as a classic hero instead of a rum-addled fop, it probably wouldn’t be worth mentioning. 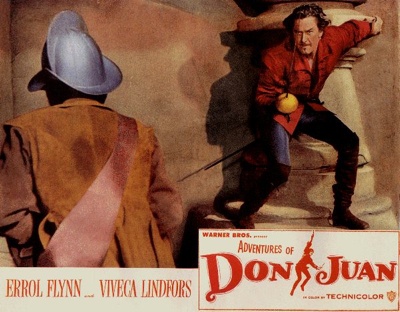 Errol Flynn was no stranger to the adventure genre, and he had more than his share of swordfighting. One instance that is often overlooked is his turn as womanizing, international man-of-mystery Don Juan in 1948. In the midst of a palace coup, Flynn’s Don Juan slogs it out with Douglas’ scheming Duke de Lorca. It is every bit as grandiose as Robin Hood, and the atmosphere of dimly-lit corridors and long shadows adds an impressively artistic look to the film. 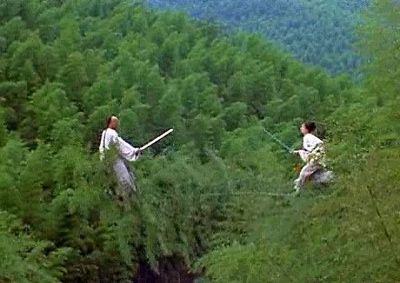 Hong Kong films had been using the technique dubbed “wire-fu” for years. But this film was the first major release in the West to use it, and the result was spectacular. Combat was no longer restricted by physics – here we see warriors fly through the air, run up vertical walls, and even balance themselves on flimsy tree branches. The confrontation between Jen Yu and Li Mu Bai in the pine forest is imaginative and beautiful, casting white-clad opponents against a palette of jade greens as they battle among the tree-tops. 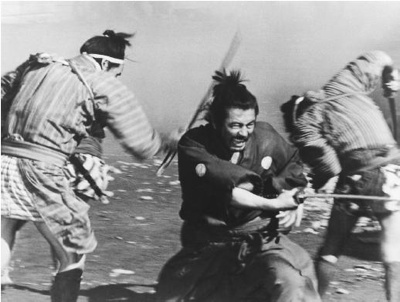 Although not a swordfight in the strictest sense, the final battle in this Kurosawa masterpiece is certainly one of the best action sequences of all time. We see the quiet discipline of the vastly-outnumbered samurai as they draw their sabers, ready for the coming onslaught of their enemies. The samurai dispatch many of them, even as they arrive on horseback. A swordfight against mounted cavalry. Does it get any cooler than that?

6
Return of the Jedi
Mark Hamill vs. um…Darth Vader 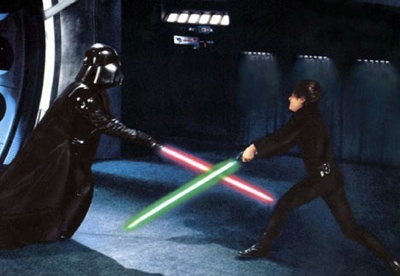 It is not the most frenetic lightsaber duel in the Star Wars saga. It is certainly not the most elaborately-choreographed. But this ultimate confrontation, between father and son, is by far the most dramatic in the series. As Luke unleashes his fury on Vader, nearly killing him, the eerie vocal score swells to convey the magnitude of this apocalyptic moment. Flashes of red and green light illuminate an otherwise pitch-black scene as sabers clash. And it gives us a nice break from the Ewok scenes. 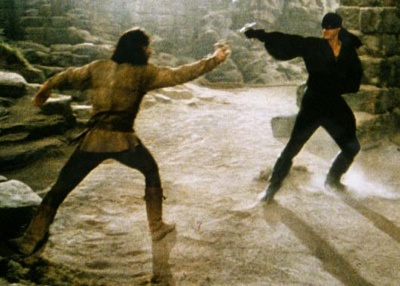 I must say, I am generally not drawn to films that have the words “princess” or “bride” in the title. However, this is a film that just gets better every time I see it. Rarely has there been a more enjoyable mixture of adventure, comedy, romance, and intrigue. Who could forget the climactic duel between Spanish wanderer Inigo and the sleazy, six-fingered Count Rugen? The conclusion of this fight alone is reason enough to watch the film.

4
The Mark of Zorro
Tyrone Power vs. Basil Rathbone 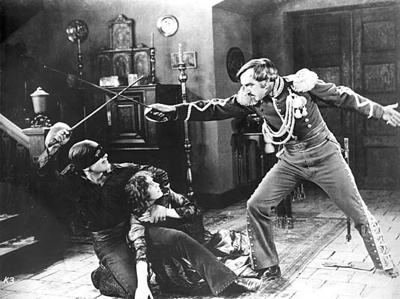 Many swordfights of Hollywood’s Golden Age were epic in scale, spanning entire castles and involving armies of extras. But in this early adventure of the masked Mexican aristocrat, the swordplay occurs entirely within the confines of one room. Zorro crosses rapiers with the magnificently slimy Captain Pasquale in a fast and furious (and likely very dangerous) battle of skill. Oh, and it was done without the use of stunt doubles or special effects. 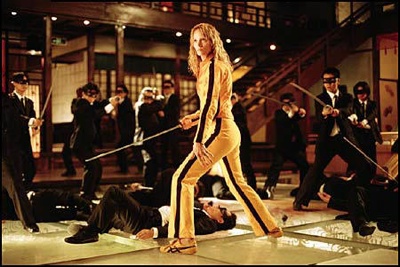 There was so much blood spilled in Tarantino’s living anime that it had to be filmed in black and white for ratings purposes. No worries, in a way it actually adds to the scene. The sheer level of carnage here, morbid yet strangely beautiful, transcends reality and enters the realm of cartoon. Not only does it pay homage to the flamboyant kung-fu movies of the 70’s, it leaves us with imagery that becomes iconic in its own right. 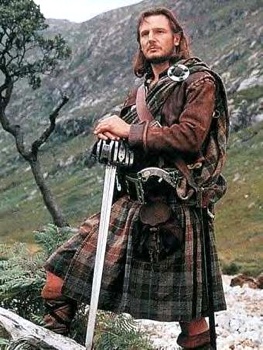 One aspect of an activity as physically demanding as swordfighting that is rarely addressed in film is the exhaustion that must accompany it. Rob Roy and his opponent, the deceptively effete Cunningham, do not effortlessly fly about the room with balletic dexterity. It is a hard, brutal, draining match whose outcome seems inevitable, until old Rob does something completely unexpected. Of all the swordfights ever depicted on screen, one feels that this is the most realistic.

1
Raiders of the Lost Ark
Harrison Ford vs. Scimitar Guy 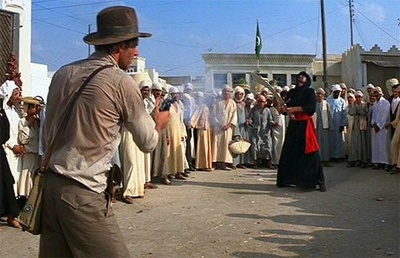 Is it possible that the coolest swordfight in film history never actually takes place? Rumor has it that Ford was suffering from gastroenteritis and wasn’t up to an elaborately-staged duel with an apparently badass swordsman in the streets of Cairo. The result: one of the most memorable sequences of all time. While the black-clad swordsman gives us the requisite display of skill, Indy pulls out his revolver and shoots him on the spot, to the amazement of the crowd. It is a defining moment for this iconic character who, although he probably could win such a match, would much rather take the easy way out and get on with his day.