Everyone loves a good shootout – and some of the greatest directors around have filmed some stunning ones. This list comprises the best of the best – the shootouts that really get the adrenaline pumping. 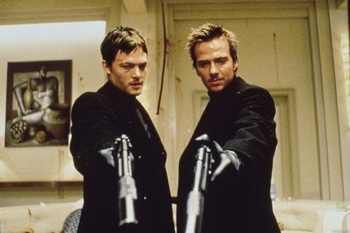 The creators of this bloody cult favorite set out to create a unique gunfight sequence in an otherwise well-worn genre. The violence is taken out of the usual urban context and set in an eerily familiar suburban neighborhood. And how many gunfights involve a cigar-chewing, scripture-spouting Billy Connolly (yes, that Billy Connolly) as a grizzled hitman? 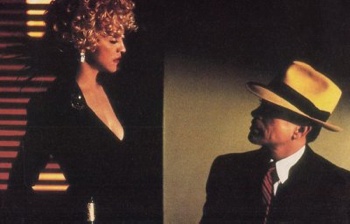 This flamboyant homage to the detective serials of the 40s concludes with a fitting rat-tat-tat. As Warren Beatty and crew ready to take down a gangland nightclub, Al Pacino’s band of miscreants (complete with names like Flat-top, Itchy and Pruneface) burst through the garage doors in their period cars, tommy-guns blazing. Sure it’s over the top, but it’s supposed to be! 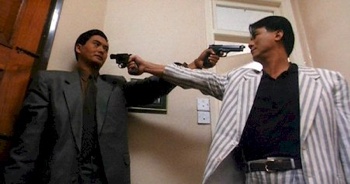 Pick any segment of this Hong Kong classic and you’re likely to see some crazy gunplay. It was here that the iconic, John Woo, double-.45 look was born. And way back in 1989, it was still cool! It also paved the way for Yun-Fat Chow’s career in Western films, though he hasn’t yet been able to top this one. 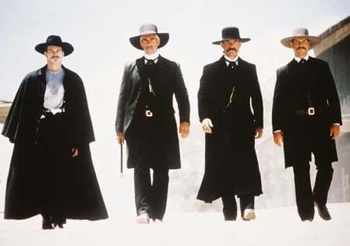 In 1993 there were two separate Wyatt Earp westerns, but this is far and away the superior film. The shoot-out is a must for any respectable western, and many iconic gunfights have risen from this genre. What makes the OK Corral battle in this film unique among them is the proximity of the combatants – eyeball to eyeball in an enclosed space with little cover. It’s a confused and vicious sequence, and is likely very accurate. 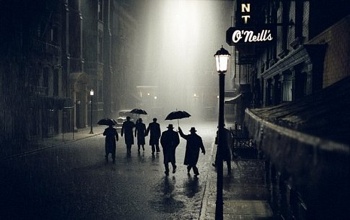 A group of Prohibition-era thugs stand on a city street in the pouring rain. Suddenly one drops dead, then another. We see the flickering of machine-gun fire in a dark alley, and the surviving mobsters return fire. There is no sound in this scene, but we know it’s surely deafening. Then, when mob boss Paul Newman’s bodyguards are all dead, Tom Hanks emerges from the shadows. It’s a scene with almost no dialogue; with these two masters, who needs it? 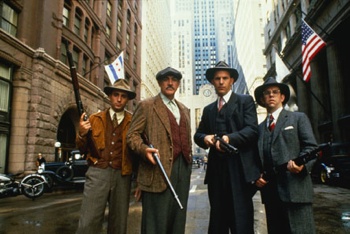 The signature shoot-out of this DePalma gangster flick is a tribute to the famous Odessa Steps sequence from Eisenstein’s “Battleship Potemkin.” As the action unfolds in slow-motion, a baby carriage careens wildly down the steps, miraculously avoiding all those pesky bullets. And stick around for the bridge shoot-out between Al Capone’s rumrunners and the Canadian mounties. 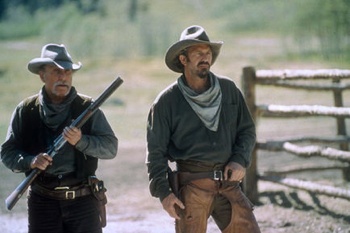 The tone for the showdown in this 2003 western is set when a surprisingly badass Kevin Costner struts up to a gunman and asks “Are you the one who killed our friend?” Those of you who have seen it know what happens next. This is a gritty, exhausting sequence that feels like a genuine Wild West shoot-out, rather than a Hollywood reproduction. No western film collection is complete without this one. 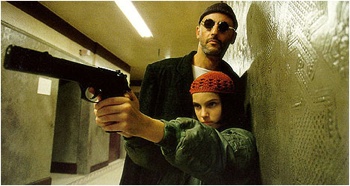 How many SWAT teams do you really need to take out a lonely immigrant and a little girl? Apparently one hell of a lot. A cramped New York apartment may not seem like the ideal place for a massive shoot-out, but it’s disturbingly fun to watch as hitman Leon dispatches wave after wave of armored cops. And it’s especially gratifying to see that mean Gary Oldman get what’s coming to him. 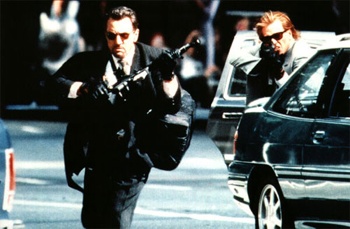 Fortunately in the case of shoot-outs, life rarely imitates art. Not so in the case of this hyper-frenetic gunfight in the streets of Los Angeles, which seemingly inspired an attempted bank robbery by heavily-armed thugs soon after the film’s release. This battle does not exhibit the fancy camera work of other heist films, or the redundant slow motion of a John Woo film. It’s shockingly real. In fact, it’s probably the most realistic shoot-out ever filmed, a fact made all the more unsettling by its real-world counterpart. 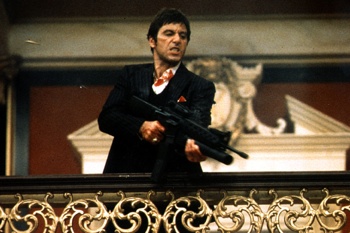 If you look at Al Pacino’s portrayal of Tony Montana, you know that it can only end this way. Unlike Michael Corleone (or even Carlito Brigante), Montana exhibits an unfettered recklessness that is the cause of both his rise to power and his meteoric fall. As his Miami mansion is besieged by his rival’s private army, blood-drunk Montana takes a hit from a mountain of cocaine before making his last stand – you know the line. Sit back and enjoy. The world is yours.