Can a regular person alter human history with the click of a button?

Overnight, or even sooner, one statement, video, audio clip, picture or document can dramatically shift the national dialogue. In the past, main stream media led the way. A picture of Dukakis looking puny in a tank marked his campaign’s derailment in 1988. One mistaken pool report of George H.W. Bush at the supermarket reportedly looking surprised while viewing a scanner swiping groceries spelled doom for his second term, falsely becoming fodder for those calling him ‘out of touch’. In every occasion, however, normal voters could not drive any narrative or use any advanced medium to significantly reach prominent national attention.

No one denies this coming Presidential election will change the trajectory of world events, impacting generations to come. Before the internet demolished once impenetrable media barriers, people wanting to influence history so quickly had to do so with the barrel of a gun.

But now, that power is in each person’s hands (literally). Here’s a list of 10 ways one person, a collection of people, or a campaign used the web’s full potential to change the 2008 election. 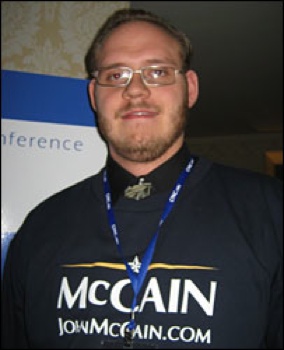 Adam Brickley registered a blog in February of 2007 with a simple vision; draft Alaska’s Governor Sarah Palin for Vice President. When asked what inspired him, he says, “She’s somebody who can really connect with the conservative base.” The 21 year old college student relentlessly supported her, posting frequently with his thoughts on the choice. When McCain finally picked Palin, she and her husband, Todd, put in a call to Brickley to thank him personally.

George Allen was a rising star in the GOP, slated for a promising presidential run when he campaigned in what was considered an easy reelection bid during the 2006 Virginia senatorial race. His competitor, Jim Webb, sent a ‘tracker’ of Indian descent to capture video of the opposing side’s rally. Allen pointed out the Democratic activist and proceeded to call him a slur, ‘Macaca’. The Youtube video posted by the Webb campaign ignited a media storm, even attracting national attention, and Allen lost the race by a few thousand votes, effectively ending any hope for a 2008 run for the White House. 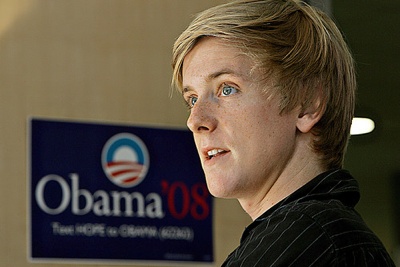 Without the power of organizing without organizations, Obama might have become an interesting footnote to the Iowa primary season. He built an impressive ground campaign reliant on new social tools that allowed supporters to exponentially increase their outreach. One of the four founders of Facebook, Chris Hughes, left the radically expanding company to join the Obama team, developing an advanced social network for supporters to organize, share and donate, which ultimately led to a shocking first place finish in Iowa. New media not only allowed his candidacy’s realization, but continues to sustain his efforts through a massive fund raising machine online that has, so far, attracted over 2 million individual donors.

Dragging slightly in the polls, McCain’s campaign, under the new direction of Steve Schmidt, learned how to exploit the viral nature of Youtube. They uploaded three videos attacking Obama; one called ‘Celeb’, then ‘The One’, and finally ‘Troops’. The exploit was successful; everyone buzzed and the media picked them up. McCain did not have to put any precious money in to placing these ads on the air, but gained copious amounts of national free time by virtue of the video’s news-worthiness. All the networks played the ads repeatedly, holding discussions on the content and nature of the attacks; but to no avail for the Obama camp, as their lead started to dwindle. 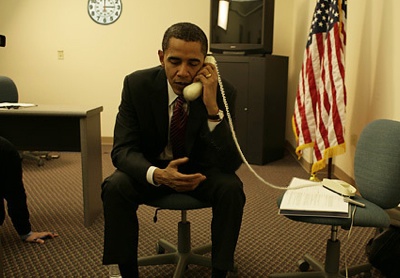 Amendments to the 1978 FISA legislation included wording intended to protect large phone companies from lawsuit for past compliance with warrantless Bush administration surveillance activities. Nearly all members of congress, save a few, agreed to the necessity of continued surveillance of physical or electronic communications possibly connected to terrorism. However, the whole packaged bill containing the retroactive telecom immunity was not met so universally. Wanting to seem tough on defense, Senator Obama, who once pledged to filibuster telephone company protection, released statements supporting the legislation despite its shortcomings. He reiterated his opposition to parts of the bill but said he nonetheless would vote for it when on the floor.

This outraged the netroots, some of Obama’s most rabid supporters. They passionately voiced their distaste with Obama, initiating a movement they called, “You can tap my wallet or my phone, but not both”. Angered fans organized a group on Obama’s own social network against him. Never before in Presidential politics had advanced social tools made way for protestations against the source that supplied them. Obama finally wrote a blog explaining his reasoning behind compromising on the legislation, still to no avail among the netroot activists. He experienced a small lag of donations from the virtual stand off. 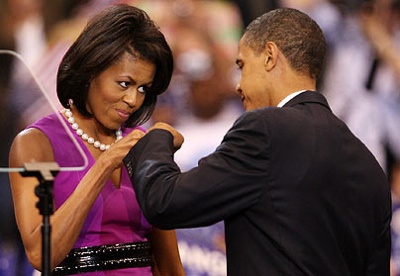 Senator Obama claimed primary victory in the Xcel Energy Center on June 3rd. After the speech, his wife joined him on stage and in a congratulatory fashion, gave him a little fist pound. The media attempted to define the gesture in several, awkward ways. On a conservative columnist’s online article, a disgruntled commenter, “Larry” in Alpine, TX, named it a ‘Hezbollah-style fist jab’. Writing humorously of the different ways the media tried to call the dap, Slate author Christopher Beam accidentally failed to delineate the comment from Cal Thomas’ piece. Human Events removed the defamatory comment, making it appear that Cal intentionally scrubbed the incendiary portion only after criticism since the original phrase no longer remained in the comment section.

Despite realizing what confusion ensued over the article and posting a correction, it was too late, as multiple news sources quoted the piece and also mistakenly referenced Thomas’ column. Just a short while later, E.D. Hill of FOXnews listed a few different ways the greeting had been called, saying, “A fist bump? A pound? A terrorist fist jab?”

Everyone criticized the show for lending credence to people’s fears of Senator Obama. E.D. Hill apologized but lost her job as host that week anyway. The misconception eventually landed on the front page of the controversial New Yorker cover. 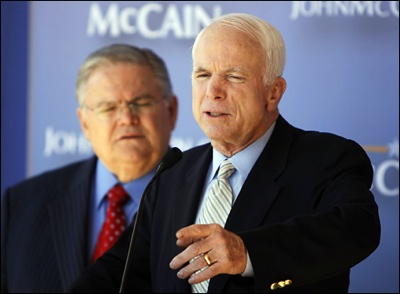 Senator McCain called Rod Parsley a spiritual adviser. John Hagee emphatically endorsed him. Parsley says America was founded to defeat Islam. Hagee says the Catholic Church is the ‘Great Whore’ and an ‘Apostate Church’, and claims God purposely sent Adolf Hitler to get the Jewish people back to Israel. A big stink was made at liberal blogging sites, like the HuffingtonPost and OpenLeft, over statements made by both. The internet lit up with opinions on the subject matter, some upset that there existed a sort of double standard over one’s pastoral associations.

Reporters asked McCain about specific statements delivered by both pastors, forcing McCain to ultimately reject their endorsements. The trouble ignited by bloggers hurt McCain’s already flimsy relationship with the religious conservatives, partly reminding everyone of his statement during the 2000 election concerning Reverend Falwell being an ‘agent of intolerance’. 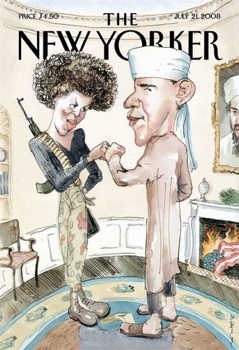 Even prior to Obama’s candidacy appearing more and more viable, untraceable e-mails sent between concerned friends unequivocally declared he secretly held to the Islamic faith. Different variations of the e-mails concerned his elementary school, swearing in on the Koran, Mohamed as his middle name, quoting his books improperly, what the Bible says of the anti-Christ, refusing to say the pledge, connections to political events in Kenya and more. Despite fighting the Smear-type campaigns on cable networks and fact-check sites, unsure Democratic voters neglected to support Obama in the primaries, leading to some very close races with Senator Clinton. The rumors continue to find support through low information voters refusing to not believe in their close friend or family’s e-mails. 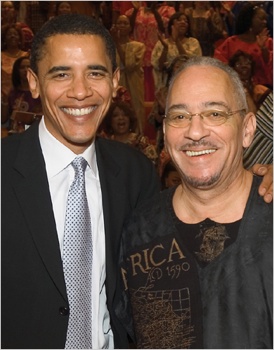 In the middle of March, Youtube clips of Obama’s pastor, Reverend Jeremiah Wright, looped endlessly on personal computer monitors around the country. They contained offensive remarks about God’s judgment on America and the government’s involvement in allegedly spreading AIDs.

News stations around the country played them repeatedly, leading to discussions regarding Obama’s chances of winning the election dwindling and voters being permanently turned off. It all culminated in a speech on race called “A More Perfect Union”, now watched millions and millions of times on Youtube alone. Pundits continued to discuss the Wright controversy ad nauseum, but their attention was directed elsewhere just a short while later when newly released video caught Hillary Clinton in a lie about sniper fire. 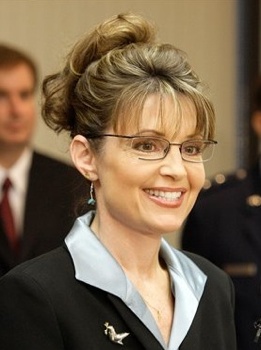 Senator McCain’s unexpected choice for Vice President took everyone, perhaps even his own staff, by complete surprise. Barely anyone knew anything about her, causing bloggers to engage in a frenzy of research and rumors. Most notably, they passed around information suggesting Governor Palin’s youngest son, Trig, actually belongs to her eldest daughter, Bristol. Such a commotion came of the rumors that it gained traction on legitimate news sources such as Drudge and the Atlantic.

Just three days after her nod, the campaign released a statement verifying that Bristol Palin was five months pregnant. This stopped the endless rumors online, but gave way to a national frenzy over the scandalous behavior of the potential VP’s family. Botching the Governor’s important first impression to the nation, the McCain campaign feverishly developed a prime time speech for Wednesday night of the convention. The discussions on cable networks, newspapers and blogs generated over 40 million viewers for the Palin speech which the media widely praised. Conservatives already excited by the pick were even more energized by their conceived enemies in the media and on the ‘angry left’.

However, the speech proved to be a double-edged sword for Palin, adding up to a record $10 million worth of contributions by enraged Obama supporters online during the 24 hours between her and McCain’s acceptance speeches. Bill Burton, Obama’s spokesperson, commented, “I hope she gives a speech every day.”

In a majority of these cases, the web encouraged the dissemination of media not particularly flattering for the candidate in question. A lot of them involved the mainstream media picking up a story with sufficient online buzz. 24/7 Cable news will likely remain an American staple for a long time, yet 2008 showed us regular people won’t be powerless forever in what stories capture America’s living rooms. If 2004 was our collective infancy learning the web’s capabilities, 2008 marks the toddler years of using those modern tools. We’re only catching the beginning of this user-defined generation, leading to what some call the ‘Youtube-ification of Politics’.