Biological mimicry is when ones species evolves to look like another. Sometimes, one organism will additionally take on the behavior and mannerisms of the other. They end up looking so similar that it is difficult to tell them apart, even though they are totally unrelated.

Animals do this for many reasons. Often, it has to do with predation. Some prey animals take on the look of some other, more dangerous animal that their own predators avoid. Conversely, a predator may mimic an animal that its prey doesn’t fear. 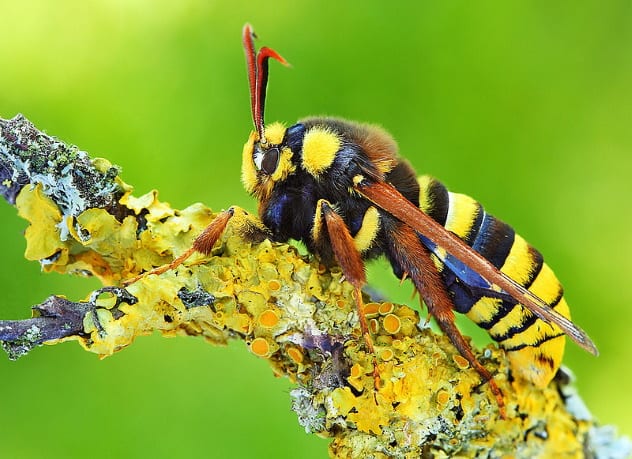 We all know hornets can deliver quite painful stings. Several species belonging to the Sesia genus, such as Sesia apiformis, have evolved to mimic hornets in look and behavior. These copycat moths are called hornet moths, for obvious reasons.

S. apiformis has the distinctive yellow and black markings of a hornet. It is also around the same size as a regular hornet and has a similar wingspan. The moth has also learned to take off in a haphazard manner, just as a hornet would, the moment it spots a threat.

There are a few differences between the hornet and hornet moth, though. The moth is yellower than a hornet and lacks a waist, even though hornets have waists in between their thoraxes and abdomens. The wings of the moth are also transparent. This last part only becomes discernible in flight, and most people and animals do not hang out long enough to find out, anyway.[1] 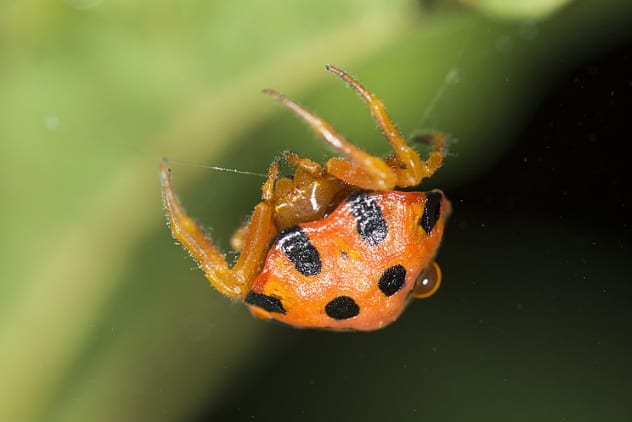 Spiders are so amazing they have a popular fictional superhero named after them. The ladybird (aka ladybug) is special, too. It does not have its own superhero, but it does have real spiders named after it. These spiders belong to the genus Paraplectana. They are a group of spiders that have evolved to look like like ladybirds.

The mimicry is necessary, considering that many predatory birds avoid ladybirds. This is because ladybirds contain toxic chemicals that emit a terrible odor when crushed and leave a nasty, lingering taste in the mouth of the bird. This had made many birds develop a strong distaste for the ladybird. Aside from spiders, a few other insects, like the ladybird-mimic fungus beetle, have also evolved to look like ladybirds.[2] 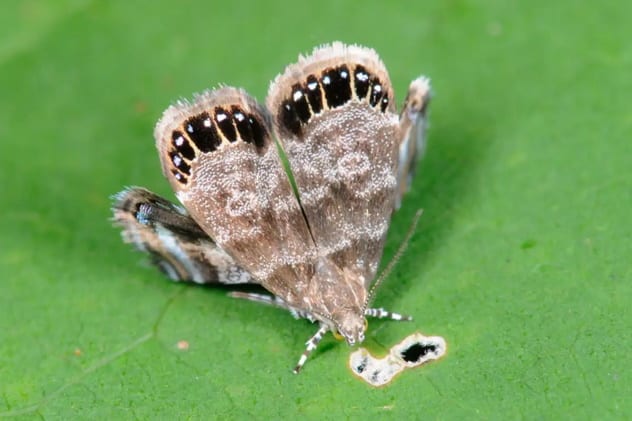 The metalmark moth doesn’t just resemble the jumping spider in looks. It also moves in a manner resembling jumping spiders instead of just fluttering around like most moths do. Male jumping spiders get so fooled that they become attracted to the moths and display courtship behavior by raising their two front legs toward the moth.

Researchers who have studied the effectiveness of this mimicry say the moth needs to have its wings in the right position for the ruse to be effective. The black dots on its wings resemble a jumping spider’s eyes, while the rest of it mimics the spider’s body. Several experiments indicate that the spider will recognize the moth as prey if it does not display its wings or if any part of it is concealed.[3] 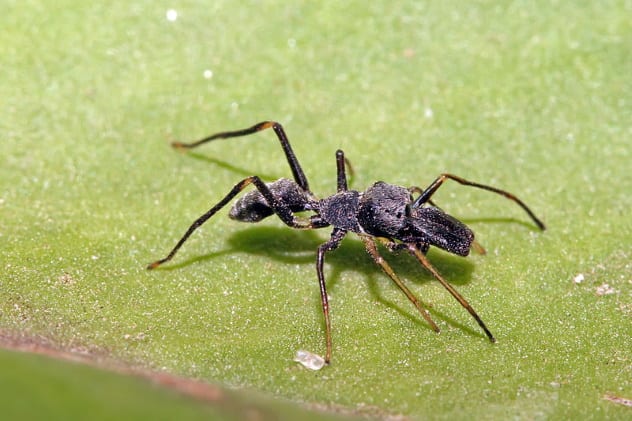 Ant mimicry (also called myrmecomorphy) is found in quite a few spider species. In fact, about 300 species of spiders take on the appearance of one ant or another. The mimicry serves two purposes. One is to deceive the ants, and the other is to deceive its predators, which will usually avoid ants.

These copycat spiders have spots that resemble the compound eyes of ants. They also have reflective hairs that make their thorax and abdomens look like those of ants. Most even walk in zigzag manners as an ant would. To appear more convincing, they make periodic stops and move their two front legs close to their heads to imitate an ant’s antennae.

Spiders like the ground spider mimic ants to deceive other ants. The spider hunts and kills isolated ants before dragging the body off while pretending to be just another ant trying to help the dead ant. The crab spider does the same thing, except that it drags the ant with a web. This allows it an easy escape if its ruse is discovered.

Other spiders mimic ants to avoid getting eaten by ants, spiders, and birds that consider them prey. These spiders also behave like ants to confuse their predators. They even build their nests close to the ants they mimic. This works because ants regularly fight off larger predators despite their smaller size. These predators have learned to avoid the ants—along with spiders disguised as ants.[4] 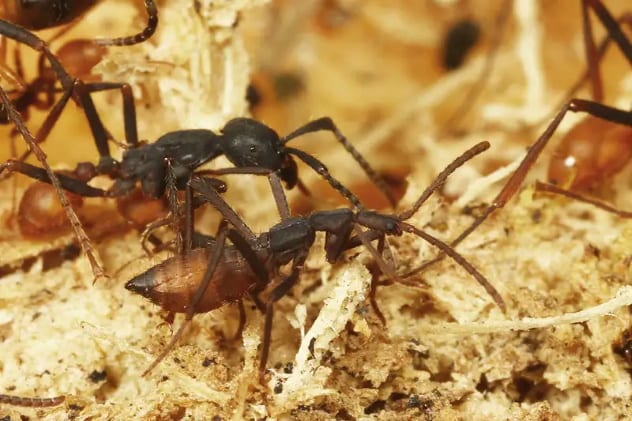 About 12 species of parasitic rove beetles are currently looking like one species of army ant or another. Most army ant colonies have one rove beetle per 5,000 army ants. The rove beetle does this to gain access into the ant colony, where it feeds on the ants’ larvae.

Their bodies have evolved to the point where they look so much like the real thing that even humans cannot tell them apart at a glance. Army ants cannot either, even when they touch the beetles, as they often do.

To be clear, most army ants are blind and actually recognize their colony mates through chemical and tactile cues. The beetles have this covered, too. They clean other ants just to get access to the chemicals the ants use for identification. This makes the beetles undetectable, even by scent. To appear more convincing, the rove beetle participates in every activity with the ants and even follows them on raids. 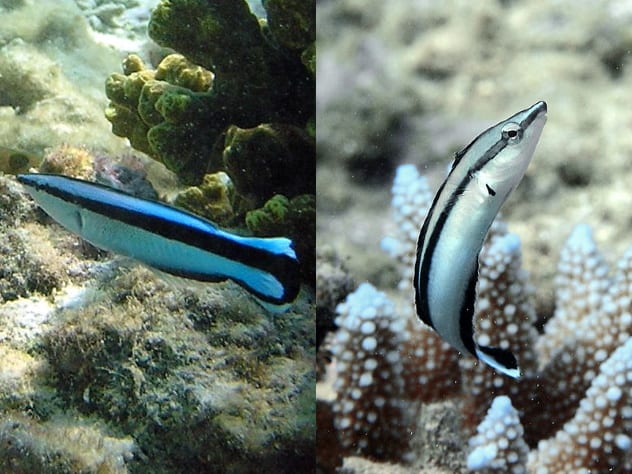 As you should have guessed from the name, cleaner fish strip other fish clean of harmful and parasitic organisms on their bodies. The relationship is considered mutually beneficial. The cleaner fish get food, while the fish that get cleaned are saved from harmful parasites.

Hemeroplanes triptolemus is a hawk moth that lives in the forests of Central America. The caterpillar of the species is capable of mimicking pit vipers to send would-be predators fleeing. When threatened, the caterpillar faces the aggressor as a true pit viper would. Then it withdraws its legs and extends the front of its body in such a way that it puffs up to resemble the head of a pit viper.

To complete the mimicry, the caterpillar mimics viper-like curves, scales, and eyes. For lifelike effects, it also throws jabs like a real viper. The appearance is so convincing that it even fools humans. Birds and other caterpillars trying to eat this caterpillar don’t hang around long enough to wonder where the rest of the “viper’s” body went.[7] 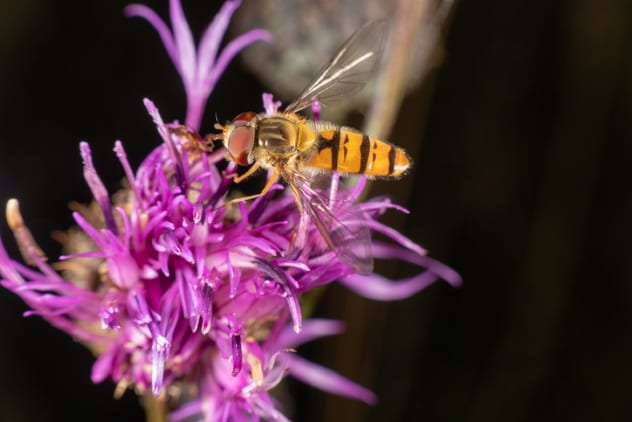 The marmalade hoverfly (Episyrphus balteatus) is often confused with the common wasp (Vespula vulgaris, also called the common yellow-jacket) because of their similar body coloration. Both have black and yellow markings, which make them indistinguishable to their predators and even humans. They look so alike that quite a few people screamed and fled when marmalade hoverflies swarmed several British beaches in 2004. 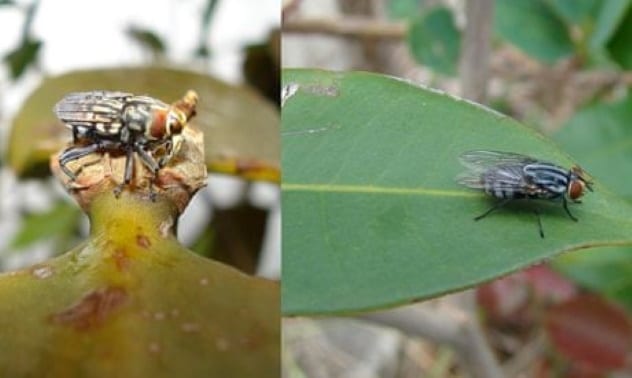 As you should have guessed, the aptly named fly-mimicking weevil (Timorus sarcophagoides) is weevil that looks like a fly, specificity flesh flies from the Sarcophagidae family. The weevils’ body coloration and markings are similar to the flies’. They also have two large reddish dots on their thorax that look like the eyes of a fly.

The fly-mimicking weevil executes the mimicry so well that it even moves and rubs its legs together as flesh flies do. The idea is to trick potential predators into believing they are flesh flies.

You see, flesh flies are very fast, and birds generally avoid chasing after them because they are difficult to catch. The fly-mimicking weevil is much slower, so the disguise is necessary to make the birds think they are not easy prey. As a result, potential predators just move on to invest their time on other, “slower” insects.

However, the ruse does not always work on entomologists, who will often want to inspect the weevil. The weevil quickly realizes the game is up and just retracts its legs and rolls over until it falls to the ground, pretending to be dead. A very clever insect we have here.[9] 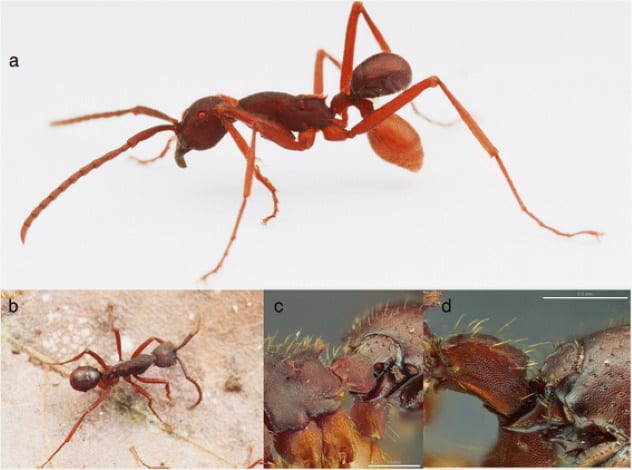 Some new creature always pops up whenever we think we’ve seen it all. What do we make of the so-called ant lovers (aka myrmecophiles), a group of organisms that just love to hang around ants? Scientists are not sure why they do, but they think it has a lot to do with the fact that ants are good at finding food.

Nymphister kronaueri is one of these ant lovers. The beetle attaches itself in between the thorax and abdomen of army ants without being noticed. The beetle gets a free ride, along with the free food it probably already receives from the ants. Scientists have also observed that the beetle prefers to attach itself to the bodies of medium-sized ants. They do not know why but think it has to do with N. kronaueri wanting to trick the ant into thinking it is actually a part of the ant’s abdomen.[10]

Read about more amazing examples of animal mimicry on 10 Devastatingly Deceptive Or Bizarre Animal Mimics and The 10 Most Devious Ant Mimics.

10 Most Oddball Communication Methods In Nature