There’s no dearth of stories of the Internet being used for malintent. From scammers out to take your money to online harassment to those dark parts of the web we don’t speak of here, the worst of Internet somehow perfectly coincides with the worst of humanity.

On rare occasions, though, the Internet can be used for good, too, as many of these online crime solvers have proven. They succeeded where professional crime agencies and police departments couldn’t, either due to good old incompetence or simply not having the crowdsourced tools only the Internet can muster. 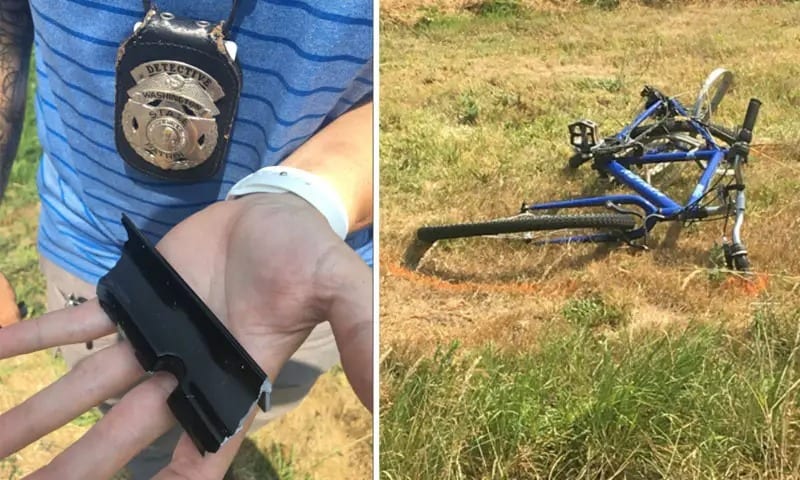 Catching someone after a hit-and-run used to be a pretty difficult task in the pre-Internet days, as there’s usually little evidence to go on in those cases. If you’re lucky (and still alive), the driver may leave some conclusive evidence behind. That may still not be enough, though, unless they outright drop their driving license or a swab full of their saliva at the scene.

We’re not saying that the Internet has improved conviction rates in hit-and-run cases, though we know of at least one instance where the culprit was caught because of the online community. It happened in Washington, where a cyclist was hit and killed by a collision, though the cops didn’t have a clue as to the perpetrator. The photo of the scene was eventually uploaded to Reddit, asking other people for help identifying vehicle parts.

While the poster likely just did it out of curiosity, things got serious when an ex state car inspector was able to pinpoint the precise make and model of the vehicle in question. Unfortunately for the man responsible, not many people in the area owned a mid-1980s Chevrolet Silverado at the time, which led to his arrest and eventual conviction.[1]

A Police Shooting. A Viral Video. An Obsessive Quest for Truth.

America is by no means new to extra-judicial killings by cops, except that now – thanks to modern technology like cameras – it’s way more difficult to get away with it. That doesn’t mean that it still doesn’t happen, though they just have to make sure there’s no one around to witness or record it.

That realization, however, was lost on Michael Slager; a police officer in South Carolina convicted of shooting and killing an unarmed black man called Walter Scott. He wasn’t immediately charged, though, as the footage shot by witnesses at the scene was too shaky and inconclusive to get a conviction. That was, of course, until a Canadian student online saw the video and decided to stabilize it.

Daniel Voshart was studying cinematography focused on image stabilization at the time, and wanted to do something about what he perceived to be a racially-motivated crime. He worked on the video and posted it as a GIF on Reddit, which – apart from later proving to be conclusive evidence – mobilized the online community in support of the victim.[2] 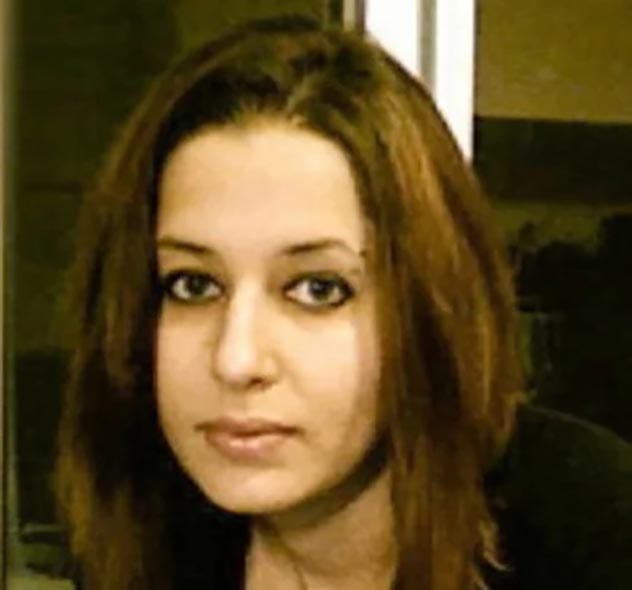 When the 18-year-old Nadia Kajouji committed suicide off a bridge on the Rideau River in Ottawa, her friends and family were justifiably devastated. She was going through a lot, including a previous miscarriage along with pressure at school. (Needless to say, if you or anyone around you is feeling the same way, please reach out to someone around you.)

As the story unfolded, though, it was soon discovered that she didn’t take the decision on her own. She had spoken to someone called Cami D (real name Melchert-Dinkel) on an online forum a few weeks before the suicide, who had convinced her to take the final step. His identity was later discovered by Celia Bay, an online counselor, who also discovered that he had been doing this for a while. All in all, he had convinced five or six people to commit suicide in the past, and was charged with one count of attempted assisting suicide and one of assisted suicide, thanks to Celia.[3] 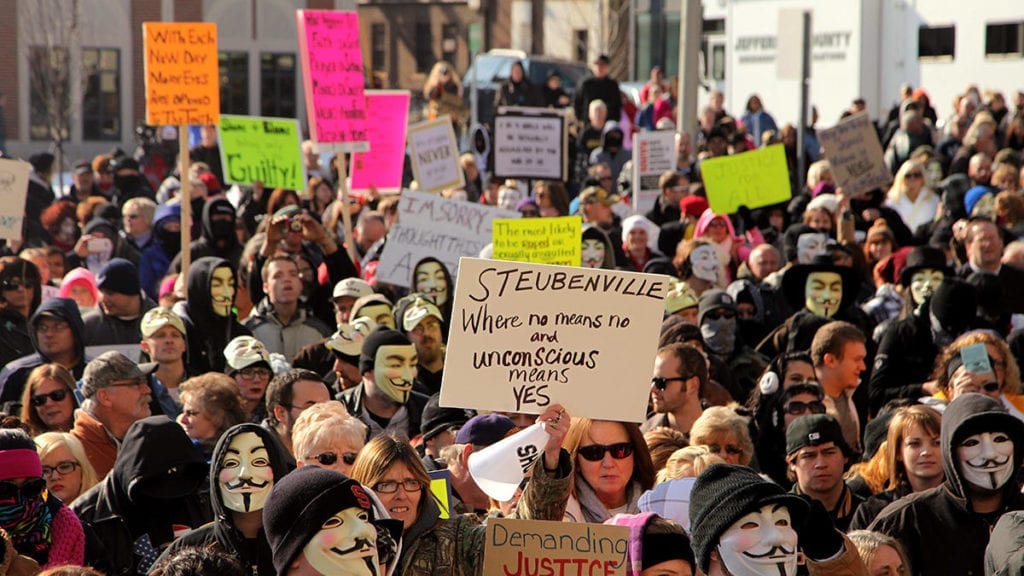 Debate around sexual assault on campus and jock culture has been raging on for a while, though the Steubenville High School case was one of the first few cases to happen in the age of social media. We’d spare you the horrific details of the crime, though as a summary, a minor was raped by a bunch of her peers in August, 2012. It happened over the course of the night and across locations on and off campus.

While the main perpetrators accused in the crime were later convicted, we often forget the role of the Internet in those convictions. Because of the local influence of the accused, the authorities were, at first, reluctant to take the case seriously. That was until Anonymous – a global and controversial – group of online hacker vigilantes posted a bulk of evidence online. Apart from forcing the authorities to reopen the case, it also brought the conversation to the national stage. It included confessions by the accused, photos and videos from the night and other incriminating material.[4] 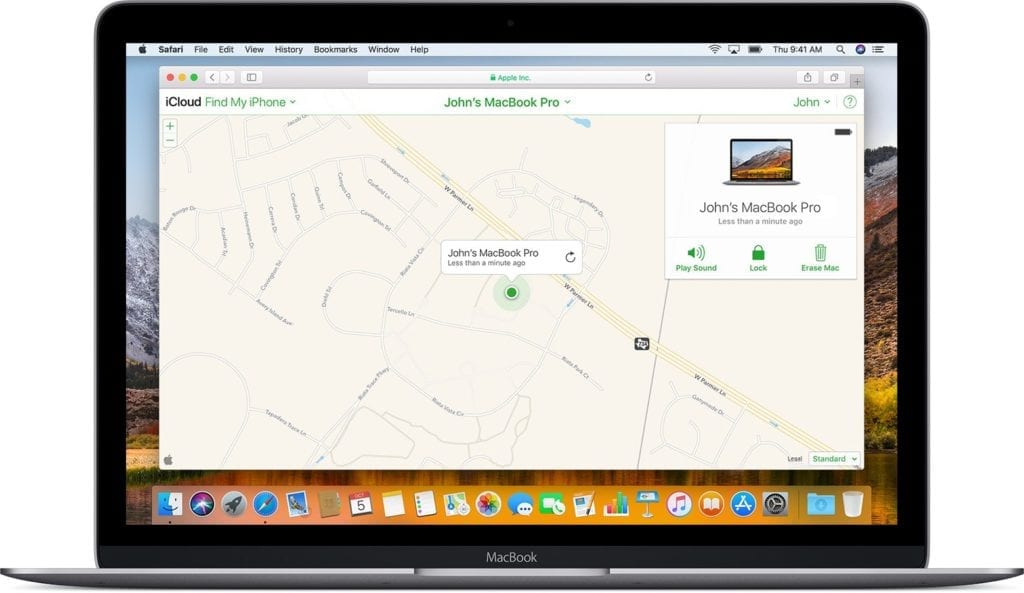 Having something like your laptop or phone stolen is devastating news. It’s not about the monetary value of the thing – even if gadgets these days are admittedly quite expensive – but rather your personal information on it, as there’s usually no way to recover that. That was probably what was going through Sean Power’ mind when his Macbook Pro was stolen, along with his phone and some documents.

It wasn’t all bad, though, as he had a software on his laptop that alerted him of its whereabouts whenever it was online. He hadn’t lodged a police complaint or was in the city at the time, and did the only thing he could think of; ask his 12,000 Twitter followers to help. To his surprise, one of his followers managed to successfully retrieve the laptop, along with all the other documents in the bag.[5] 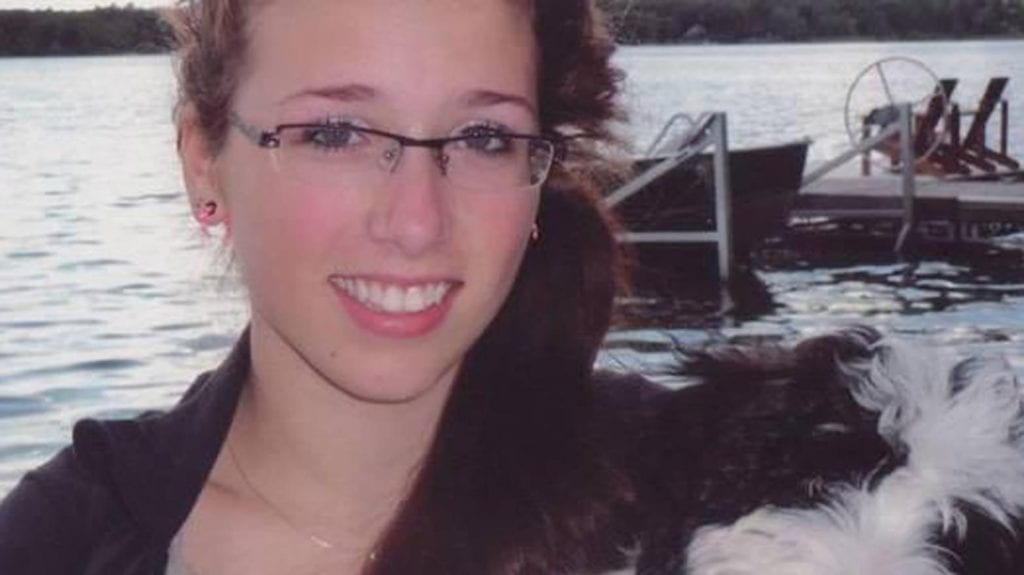 The alleged gang rape and eventual suicide of 17-year-old Rehtaeh Parsons in Canada made news around the world. Accounts differ on exactly what drove her to suicide, though many believe that the circulation of her photographs online and cyberbullying were the primary factors. While similar crimes have definitely happened before, the involvement of social media and the relatively-new phenomenon (at the time) of online harassment gave this one a tragically unique angle.

The cops had initially closed the case, as they found little to no evidence linking the gang rape to the suicide (despite there being literal photographic evidence of it). They had to reopen it due to mounting pressure from people online, especially from hackers affiliated with Anonymous. We maintain that any kind of vigilantism is bad – as the line between vigilantes and mobs is a rather thin one – though in this case, the hackers definitely made sure that the case doesn’t go cold.[6] 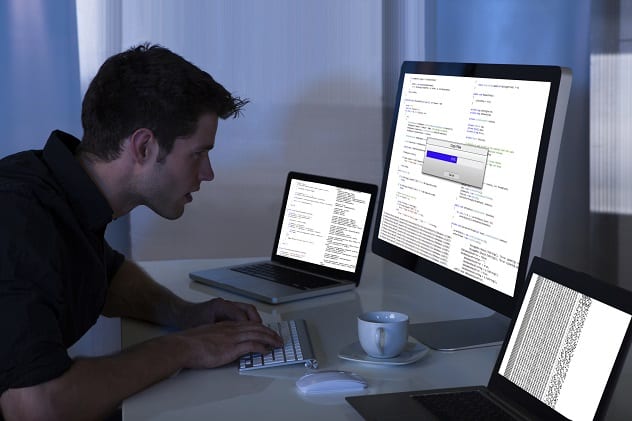 As anyone who has truly gone to the absolute depths of the Internet (for research purposes, of course) would tell you, there really is some horrifying stuff out there. We’re not just talking about illegal drugs and bizarre kinks here, but real snuff movies, child pornography and hired killers. It’s a difficult place to police, too, as most of those corners are hidden behind the dark web and other elaborate privacy measures.

That didn’t sit too well with a hacker called Brad William, who decided to do something about it. Originally operating anonymously under his alias Omni-Potent, he designed a virus to infect over 3,000 computers of suspected child predators. While a lot of the evidence he ended up gathering was incriminating, the authorities never acted upon most of it, as it’s not admissible in court because of being obtained illegally.

That doesn’t mean that he didn’t help at all. His evidence did end up securing a few convictions and outing suspected child predators.[7] 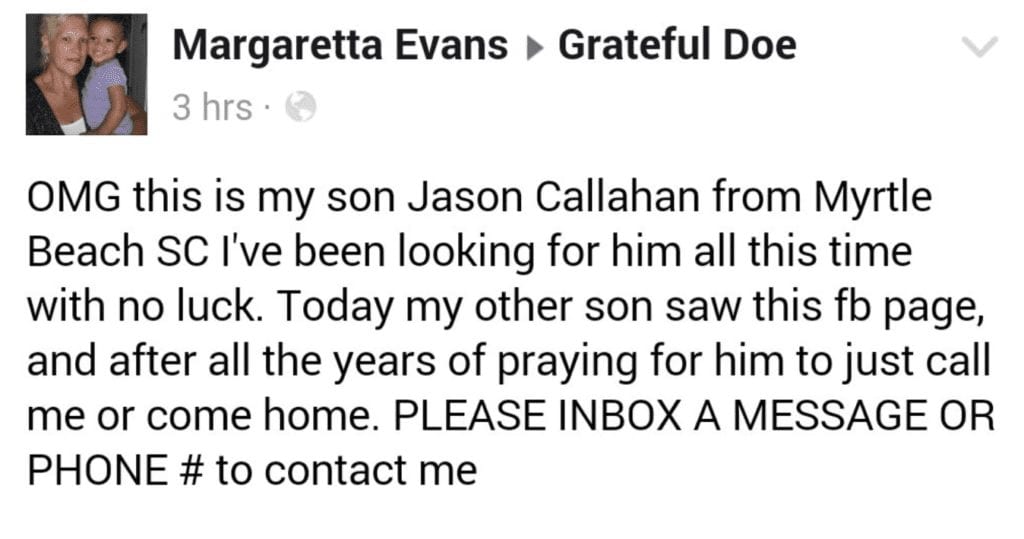 Anyone who grew up in or around Greensville County in Virginia would have heard of Grateful Doe. It was an unofficial name given to an unidentified victim of a car crash that killed two, as no one knew who he was for 20 years due to the extent of his injuries. All they had to go on was a tattoo on his arm, two tickets to a Grateful Dead concert and a note addressed to a certain Jason.

All of that changed when Grateful Dead fans online decided to make a page dedicated to identifying him, which drew quite a bit of attention to the otherwise closed case. Fortunately, one of the photographs posted there prompted a woman to contact the admin. As it turned out, the unidentified body was that of her son Jason Callahan who had gone missing around that time (they just assumed that he ran away from home), which was later confirmed by DNA tests.[8] 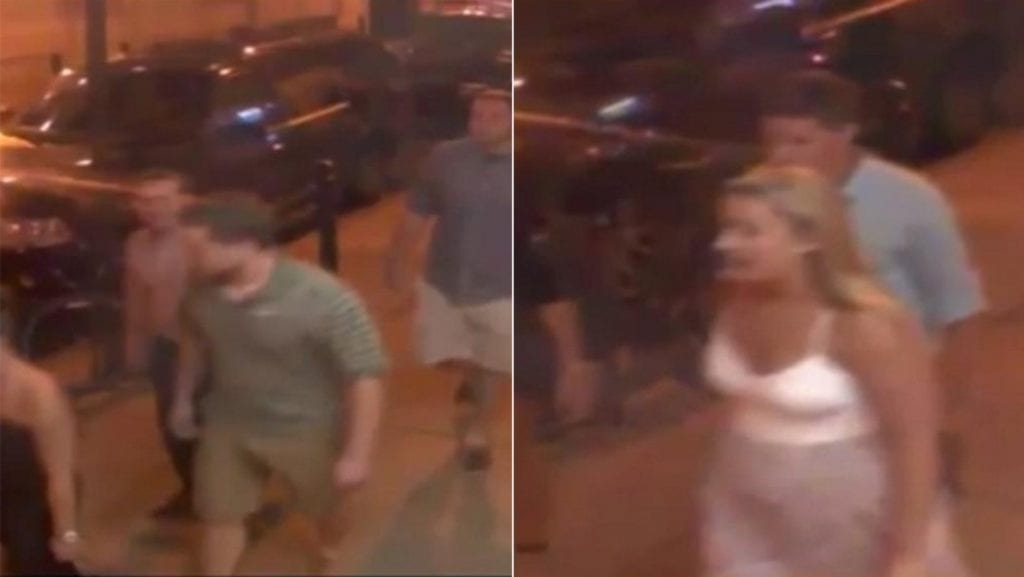 Social media is more often in the news for causing hate crimes than preventing them, especially in today’s polarized society. In many of those cases, it’s not possible to ascertain the identities of the assailants, as most of them happen in secluded parts of the city at night (if they’re smart about it, anyway).

So, when a couple of men were beaten up by a group of assailants in Philadelphia for their perceived sexuality back in 2014, it looked like it’d go down the same way as all of those other cases. Fortunately, the authorities decided to release the pictures to the public, and someone on Twitter was able to correctly identify them.[9] 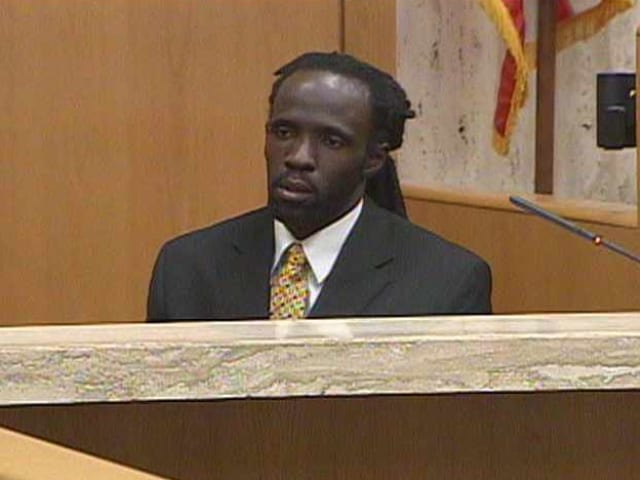 No matter how much we try to get people to not murder each other, it has been a part of human society for as long as one can remember. Even with our best technology, it’s quite difficult to solve all murder cases out there, as incriminating evidence is still quite hard to obtain. On the other hand, some murder cases get solved by the most unexpected people, like amateur detectives on the Internet.

Case in point; the murder of a certain homeless man in Florida named Abraham Shakespeare. While the police originally had no leads on the suspect, frequent visitors of the online crime-solving forums called Websleuths suspected a woman Shakespeare had transferred all of his previous lottery winnings to. Things got even more bizarre when the woman herself joined the discussion, and eventually confessed to the murder. The moderators made sure that none of her words were edited, which was enough for the cops to get a conviction.[10]

For more interesting lists on the internet, take a look at 10 Creepy Internet Stories That Are Disturbingly Believable, and 10 Internet Hoaxes And Pranks.