This list includes some interesting and sometimes intriguing experiments that have attempted to prove or disprove one of the most important questions ever faced by humanity: Is there life after death? I had no agenda either way as I was putting this list together. I hope if anyone that has information to add credibility (including some of your own experiences) or any evidence to debunk some of these experiments you will share it in your comments.

SEE ALSO: 10 Oddball Things To Make You Believe In An Afterlife 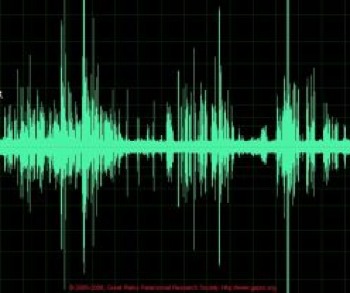 EVP (electronic voice phenomena) is a mysterious event in which human-sounding voices from an unknown source are heard on recording tape, in radio station noise and other electronic media. Most often, EVPs have been captured on audiotape. The mysterious voices are not heard at the time of recording; it is only when the tape is played back that the voices are heard. Some skeptics say interpreting random sounds into voices in their own language would sound like random noise to a foreign speaker. You can hear some samples of EVP here. 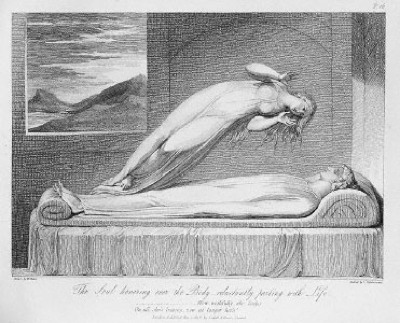 This is not the official name of this experiment but I thought it had a nice ring to it. In 1907 Dr. Duncan MacDougall of Haverhill, MA placed six terminal patients on a specially designed bed built on a scale and weighed them as they took their last breath. Based on results from the experiment, the patients lost approximately 3/4 ounces which equals 21.3 grams. MacDougall also measured fifteen dogs in similar circumstances and reported the results as negative with no perceived change in weight. He took these results as confirmation that the human soul has weight and that dogs do not have souls. MacDougall’s experiments were published in the New York Times and some medical journals.

Interesting Fact: MacDougall’s complaints in his journal about not being able to find dogs dying of the natural causes led to the suspicion that he was poisoning dogs to conduct his experiments. Also: These experiments inspired a film called “21 Grams” starring Sean Penn. 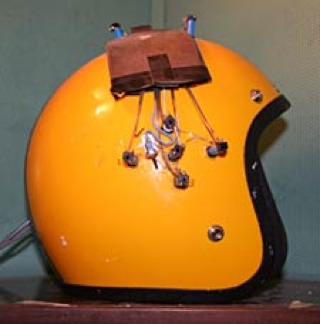 The God Helmet refers to a controversial experiment in neurotheology (study of correlations of neural phenomena) by Michael Persinger. When a modified snowmobile helmet is placed on the subjects head, magnetic fields start stimulating the brain. Persinger claims that near death experiences such as bright lights, the presence of God and seeing dead relatives etc. are reproduced. Richard Dawkins, who is known for his atheistic views and criticism of religion volunteered to test Persinger’s device. Afterward, he admitted on BBC that he was very disappointed that he did not experience communion with the universe or some other spiritual sensation. It should also be noted the helmet was also tested by a person that previously experienced a near death experience and the results failed to duplicate the same sensation.

Interesting Fact: Persinger claims that at least 80 per cent of his participants experience a presence beside them in the room, which they variously say feels like God or someone they knew who had died. You can learn more about the God Helmet here. 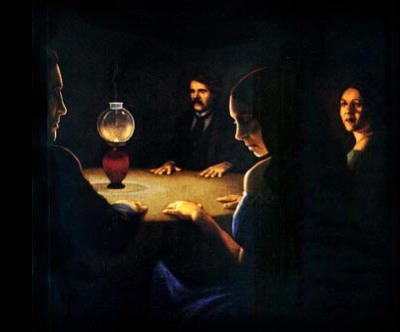 The Phillip Experiment was conducted in the early 1970’s by The Toronto Society of Psychical Research. The purpose of the experiment was to see if a fictitious historical character could manifest itself through the group’s efforts of concentration. They named the ghost Phillip and gave the ghost a personality and a complete background, even drawing a portrait to make him seem more real. The 8 members in the group also memorized the fictional biography and studied the period in which Phillip was supposed to have lived. The séances proved nothing for many months until 1973 when Phillip began to communicate. He first came through as a solid rap on the table. In the months that followed, the group discovered that when they asked questions and using 1 knock as “yes” and 2 as “no”, they could actually have an intelligent conversation with their ghost.
Interesting Fact: The experiment came to a strange end when one member of the group broke ranks and stated aloud in a reply to Phillip that “we only made you up, you know.” All communications stopped. Once denied that Phillip was real, he ceased to exist. 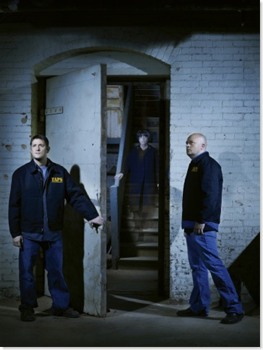 Ghost Hunters is a reality television series that debuted in 2004. A team of investigators travel to locations that are reported to be haunted. To locate ghosts the team has experimented with Geiger counters, EMF (electromagnetic field) scanners, infrared and night vision cameras, handheld digital video cameras, digital audio recorders, and laptop computers. The ghost hunters claim to have several good recordings of strange mists, odd lights, moving objects, and shadowy figures that manifest before the camera and disappear quickly.

Interesting Fact: Critics and skeptics of the program point to a lack of scientific methodology and critical examination in their investigations as well as questionable production aspects including editing. 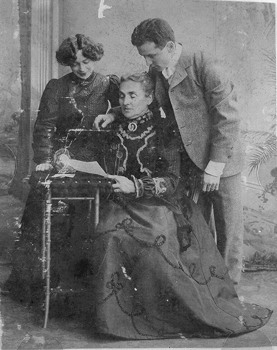 Houdini’s training in magic allowed him to expose many mediums as frauds that had successfully fooled many scientists and academics. Fearing that spiritualists would exploit his legacy by pretending to contact him after his death, Houdini left his wife a secret code. Ten words were chosen at random from a letter written by Conan Doyle that he would use to contact her from the afterlife. After Houdini’s death on October 31, 1926 a friend of Doyle, Rev. Arthur Ford claimed to have contacted both Houdini and his deceased mother at a séance through his spirit guide. Ford stated that the message received was in the pre-arranged code worked out by Houdini and his wife before Houdini’s death. However most believe Ford conspired with Doyle and also talked Houdini’s wife (who was ill and self-medicating with alcohol) into conspiring to assist him in creating the impression he had contacted Houdini’s spirit.

Interesting Fact: Houdini’s wife Bess held yearly séances on Halloween for ten years after Houdini’s death, but Houdini never appeared. The photo above is Harry Houdini with his wife and mother 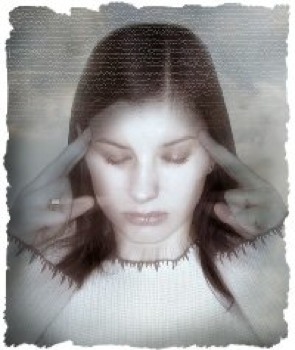 Gary Schwartz, a professor of psychology at the University of Arizona wrote a book in 2002 called “The Afterlife Experiments”. In the experiments he used mediums and sitters (someone who had had very close relationships with people now dead) to investigate whether or not there is life after death. The mediums consistently came up with specific facts and names about the sitters departed friends and relatives that the skeptics have been unable to explain away as fraud, cold reading, or lucky guesses. For the first sitter the results showed that the mediums had ranged from being 77 percent to 95 percent accurate. The average hit rate was 83 percent. The hit rate for the second sitter was similar to that of the first sitter. To rule out lucky guesses he set up a control group of sixty-eight students from the University of Arizona. The hit rate of the control group was just 36 percent. 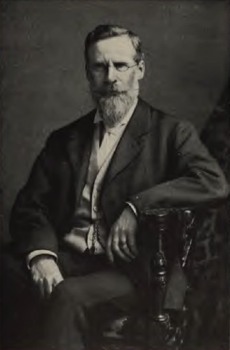 Sir William Crookes was an English chemist and physicist and attended the Royal College of Chemistry in London. One of Crooks accomplishments was the “Crookes Tube” which would lead to the discovery of cathode rays, x-rays and the electron. Crookes had developed an interest in spiritualism possibly by the untimely death of his younger brother in 1867 at age 21. In 1870 Crookes decided that science had a duty to experiment with the phenomena associated with Spiritualism. The conditions he imposed on mediums were as follows: “It must be at my own house, and my own selection of friends and spectators, under my own conditions, and I may do whatever I like as regards apparatus”. Among the phenomena he said he witnessed were movement of bodies at a distance, changes in the weights of bodies, levitation, appearance of luminous objects, appearance of phantom figures and the appearance of writing without human circumstances which would point to the agency of an outside intelligence. His report on this research in 1874, concluded that these phenomena could not be explained and that further research would be useful.

Interesting Fact: Most scientists were convinced that Spiritualism was fraudulent, and Crookes’ final report so outraged the scientific establishment that there was talk of depriving him of his Fellowship of the Royal Society.

Australian Psychologist Peter Ramster made a documentary in 1983 called “The Reincarnation Experiments”. During the experiments he found very convincing evidence of past lives. One of the individuals featured in the film remembered a life during the French Revolution. When under trance she spoke in French without any trace of an accent, understood and answered questions put to her in French and knew the names of streets which had changed and were only discoverable on old maps.

Interesting Fact: General George S. Patton was a staunch believer in reincarnation and often claimed to have seen vivid, lifelike visions of his ancestors and also believed he was a reincarnation of Carthaginian General Hannibal. 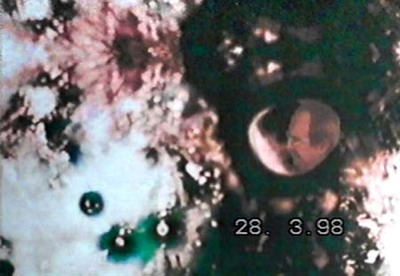 In 1993 four psychic researchers and observers embarked on a series of experiments in the Norfolk village of Scole. For five years, more than 500 experiments were carried out. During some of the experiments objects materialized, lights danced, and solid beings appeared. Luminous spheres also flew around the room in apparently intelligent manner. The image above was received on 35mm films still in the light proof containers with no cameras used. Messages were also transmitted onto audio-tape. The experiments were repeated in the United States, Ireland and Spain. In the United States scientists from NASA, the Institute of Noetic Sciences and the University of Stanford also took part. You can learn more about The Scole Experiment here.

Interesting Fact: James Webster, a professional magician with 40 years of experience investigating paranormal phenomena came to the following conclusion: “I was unable to discover any sign of fraud, and it seems to me that fraud couldn’t have been possible, both because of the type of phenomena observed and by the conditions in which they came about”.