Who doesn’t like a wedding? Well actually many people don’t but here are a few reasons why you should go anyway. Because you never know what you may find, love makes people do crazy things. 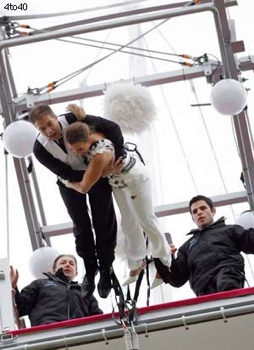 Some people are just too literal. This couple decided to take the plunge into marriage from 164 feet in the air, and even had the ceremony on a platform with 22 relatives and friends suspended along with them.

The guests were securely strapped to their chairs with tuxedos, dresses and all. The platform was slowly raised as the ceremony went on, until the entire assembly reached 164 feet in the air where Sandra Eens and Jeroen Kippers exchanged rings and took a leap of faith together. The entire wedding was done by Marriage in the Sky the same company that does Dinner in the Sky events. 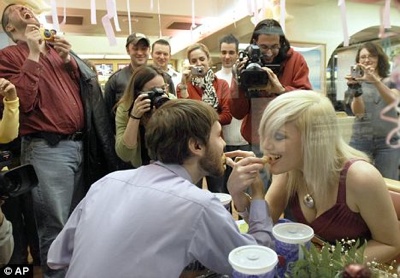 We have two contenders for this one and you can decide which is more romantic.

The first comes to us from Fairborn, Ohio were co workers Tyree Henderson and Trisha Lynn Esteppe married at the McDonald’s where they met 3 years prior. The restaurant didn’t skip a beat as the wedding took place and customers came and went placing orders and eating their Big Macs. The lucky bride stated that, “she could not imagine a more romantic setting for their wedding”. Not sure which is worse the fact that she thought that was romantic or that they have worked there for 3 years.

Our second couple decided to tie the knot at their favorite fine dining establishment, Taco Bell. The bride and groom, Paul and Caragh Brooks wedded sitting in a booth while customers looked on. Instead of personalized mints they had hot sauce packets labeled “Will you marry me?” The saucy bride wore a $15 hot pink dress while a friend (who got ordained online) read the vows wearing a nice t-shirt. The two met online and were a step ahead as they already had the same last name. I guess that’s a good enough reason as any to get married at Taco Bell. 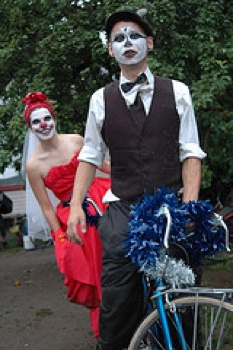 This one is kind of creepy but once you get past the makeup it is not so bad, assuming you are not terrified of clowns of course.

Roadkill Raccoon and Reddish Raddish married at the Alberta Street Clown House, their non clown names are Carol Banner and Morgan Nilsen. Naturally the bride and groom love everything clown and decided to share that with everyone. Guests dressed up as clowns and had all kinds of activities that other weddings should have. Such as mud wrestling, mini bike tricks, and of course jousts. The couple ended the ceremony with a bike parade to the reception. A little strange but seems like lots of fun (again assuming you are not terrified of clowns). 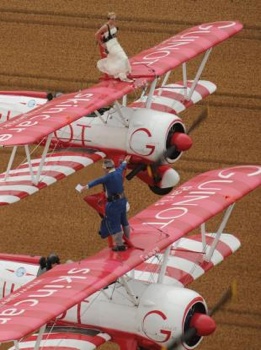 Sometimes love makes you feel sky high, apparently that wasn’t enough for this couple that got married in mid air on top of several bi planes!

The activity known as “wing walking” was taken to another level when the British couple, 24-year-old Darren McWalters married his bride Katie Hodgson while the minister stood backwards on another plane and administered the ceremony. In total three bi planes were used, one for each person as they flew close together. All three of the participants were securely strapped complete with full tux and wedding dress. Everything was transmitted wirelessly and broadcast to the guests on the ground via a speaker system. 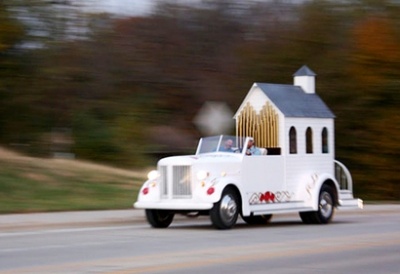 In a hurry to get married, then you might want to hit the road and try the hot rod wedding from Reverend Darrell Best.

The reverend turned a 1942-edition American La France fire engine into a mini chapel on wheels. The holy matrimony ride is complete with stained glass windows, pipe organ and even an altar for the special occasion. The fire engine fits everyone you need for the wedding; bride, groom, best man and maid of honor. Reverend Best charges a $200 fee plus $2 per mile for the ride and ceremony; he is located in Shelbyville Illinois. Honeymoons meanwhile are not allowed on the ride. 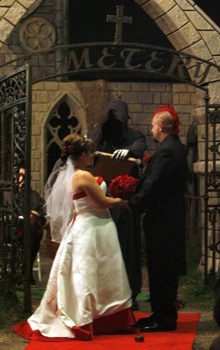 Who says weddings have to be pretty and fancy, how about dark and morbid? This couple took their love of the macabre and the relationship to the next level when they got married at a haunted house where they worked together.

Tina Milhoane 22 and Robert Seifer 24 married at 7 Floors of Hell in the haunted house’s cemetery. Everyone dressed the part with the groom making his entrance in a hearse and coming out of a coffin to his beloved bride. The bride meanwhile still dressed in white with a splash of red added to mimic the character Carrie. The minister also played his part as the Grim Reaper and even read the Lord’s Prayer to the audience. 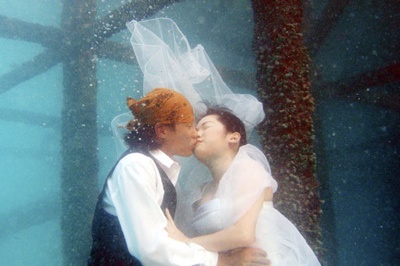 Ah sometimes marriage can be sink or swim, for some its sink, swim and scuba. But forget just getting married while you scuba dive, how about staying in an underwater hotel.

You can make it all happen at the Jules Undersea Lodge where you can make your underwater adventure come true. For a mere 1750.00 plus tax you can have this lodge all to yourself and even stay there for the honeymoon. Guests scuba dive to the underwater lodge and have plenty of room to relax with two bedrooms, dining area, kitchen and living area. The lodge is located in Key Largo Florida and is 21 feet underwater. 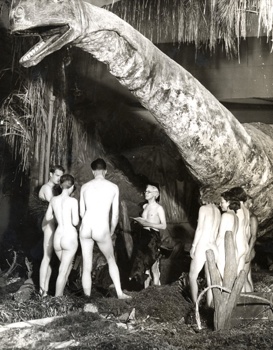 Looking to let your vows hang loose? Then a nudist wedding may be for you. Just think you don’t have to worry about a tux or wedding dress and your wedding pictures will be very popular.

Many people do this every year from Dallas TX, to Australia, but one of the most well known places to have a nude wedding is at the Hedonism III Resort in Runaway Bay, St. Ann. On Valentine’s Day in 2003, 29 couples exchanged vows in the buff making it one of the largest nude weddings ever. The resort provides everything free of charge with a minimum four night stay. No word yet if Viagra is available as party favors. 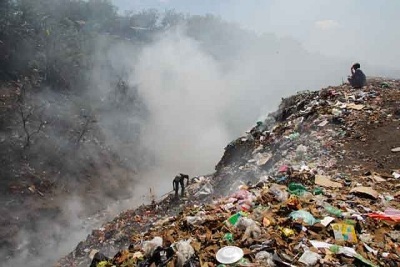 Think marriage stinks? It certainly did for this couple who got married at the Bethel Transfer Station where the couple Rockie Graham and Dave Hart first met. Rockie Graham was recycling when she caught a dirty look from Dave and three years later they were married in this garbage dump with 250 of their closest friends. The bride wore a $7000 white dress with the dump as the picture perfect background.

The idea came from Dave who wanted to exchange vows where they originally met. Rockie stated she was “reluctant” at first but eventually gave in to Dave’s idea. Now that is compromise, but I suppose if you are going to start a lifelong relationship in a dump you can only go up from there.

1
On top of Mount Everest 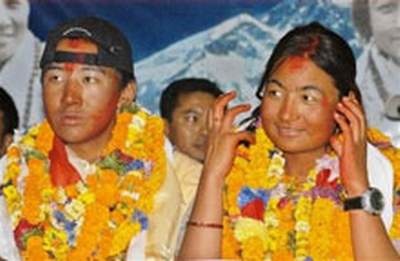 Finally we have a wedding that was a first ever.

A Nepalese couple actually got married on the peak of Mount Everest the first ever in history. Pem Dorjee and Moni Mulepati made it to the top as part of the Rotary Centennial Everest Expedition and kept their plan a secret until the last minute since they didn’t know if they would make it all the way. The couple spent a mere 10 minutes at the peak and briefly took off their oxygen masks to exchange vows while friends took pictures. There have been couples in the past who have tried to make the same trip but none have been able to make it so far until now.