There are plenty of strange animals living today, but few people know how odd some of the creatures of the past were. Here is a list of fifteen such creatures, ranging from dinosaurs to various other reptiles and fish. All are unseen by modern man (except in the form of fossils) and all are bizarre. In no particular order. This genus of elephant-like creatures was not only huge, but they also had a pair of chin tusks. These odd tusks might have been used to dig up the soil to gain access to roots and vegetables. They also had a relatively short trunk compared to other Proboscideans. They ranged from 12-15 feet high, making them one of the largest mammals to ever walk on the earth. 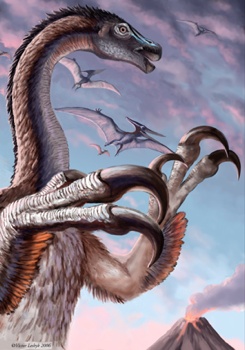 This family of strange, mysterious theropods was notable for their long necks and their large claws. However, unlike most other theropods, they were herbivores (or at least primarily). Some of them may have had feathers. The genus that the family is named after, Therizinosaurus, is actually only known from a few fossils, but its claws were quite large, likely reaching a meter in length. 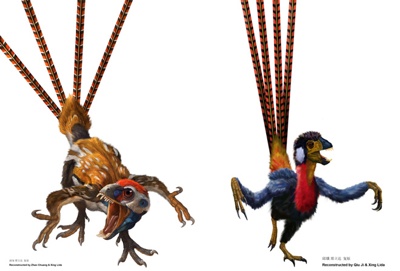 This bird-like dinosaur reveals an interesting part about the evolutionary history of birds. This member of the Scansoriopterygidae (“climbing wings”) had no flight feathers, but it did have four long tail feathers. These feathers were likely used in displays. Due to its age (It lived in China around 152 to 168 million years ago), it provides evidence that feathers evolved several million years before flight did (not surprisingly). It was also one of the smallest dinosaurs, reaching just 10 inches in height as an adult (not counting its feathers). That’s the size of a pigeon. 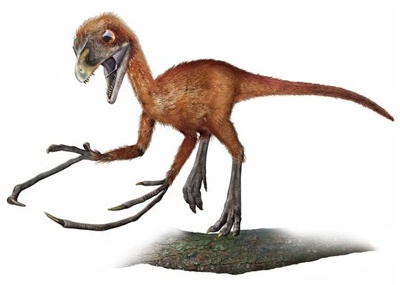 Another bird-like dinosaur, this one belonged in the same family as Epidexipteryx. It is currently the earliest dinosaur known to have adapted for life in the trees, an important moment in the evolution of birds. More bizarrely, this dinosaur had an oddly long third finger, twice the length of the other ones. They may have been used to dig for insects. 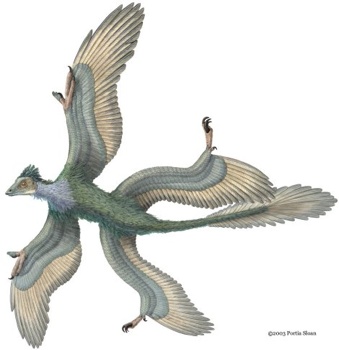 Yet another bird-like dinosaur, this dinosaur had four wings (and a feathered tail), although it could not fly. Instead, it likely glided from place to place, kind of like a flying squirrel. It is likely that this creature is one of the most recent common ancestors between birds and dinosaurs, its gliding ability eventually evolving into flight. Unfortunately for the genus, one fossil was used in a forgery, along with a fossil of a primitive bird, Yanornis, to create a fake fossil that was said to be the ultimate missing link between birds and dinosaurs: Archeoraptor. Although it could have been caught before the public noticed, it was published in National Geographic before it could be peer reviewed. When it was exposed for the fraud it was quite embarrassing to the scientific community. There are two species of Microraptor. 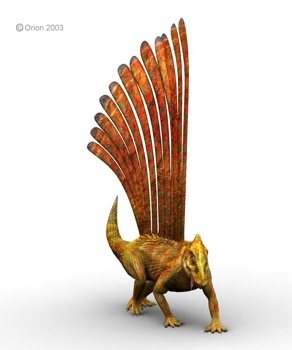 Living during the Triassic, Longisquama was a small, lizard like creature that appears to have had a series of long feathers on its back. This implies that birds might have not evolved from theropods, but lizard-like reptiles instead. Of course, things are not always what they seem. Some scientists think they are just specially modified scales. Others think that the fossil’s form is an optical illusion: that the feathers are just fern fronds. Due to the large amount of feathered dinosaur fossils, it seems that these two possibilities are more accurate. 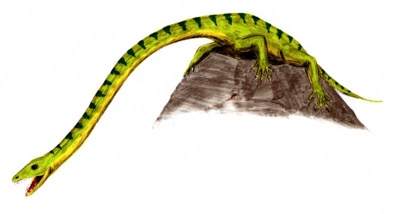 When I describe a long necked reptile, most people think of sauropods or even plesiosaurs. This Triassic reptile was neither of these. This reptile was 20 feet long, yet had a 10 foot long neck! Evidence indicates that this was a fish-eating reptile, since fossils of it have been found in mainly partially aquatic fossil sites and fish scales and Cephalopod tentacles have been found in their stomachs. They might have stayed on the beach, using their long necks to help them devour fish from the sea. It is also thought to have been at least semi-aquatic. 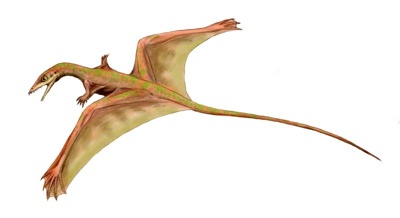 Another gliding reptile, this Triassic critter glided similarly to Microraptor. However, Sharovipteryx had two “wings” on its hind legs and two small “wings” on its front legs. It might have used its wings while jumping from place to place on the ground. Some scientists think it was related to Pterosaurs, but its reversal of wings to its legs instead of arms questions this. 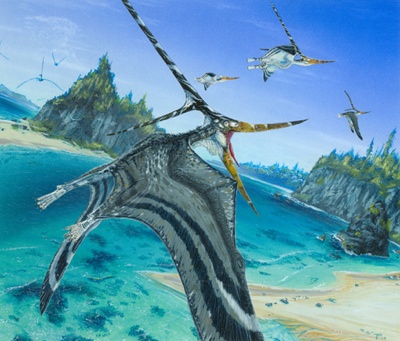 This genus of pterosaurs is the only one that does not have claws on its wings. Otherwise, most species looked quite average, similar to the famous Pterodon… until a new, currently unnamed species was discovered in 2003. The species had a huge, antler-like crest, larger than any other pterosaurs crest. Some speculated that there was a flap of tissue in between these antlers, like some other pterosaurs, which could have been used like a sail to enhance its flight. However, research shows that a crest that large would actually impair its flight, so it likely just had an odd set of antlers. 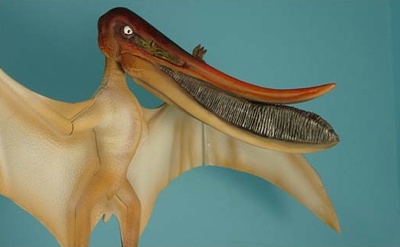 This pterosaur had an unusual set of teeth, similar to the baleen of some whales. It almost certainly used these teeth to eat small, aquatic organisms, similar to the way a flamingo eats brine shrimp. Since flamingos get their pinkish hue from their diet, Pterodaustro might have been pinkish too. 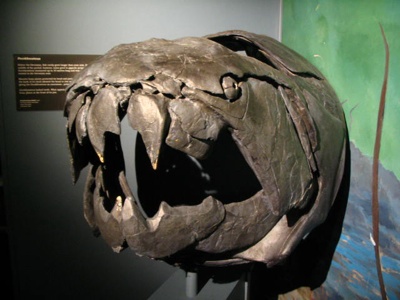 One of the scariest creatures ever to live in the ocean, this Devonian fish could grow up to 33 feet long, had an armored face, and likely had one of the strongest bites in history! It used a beak-like mouth instead of teeth to devourer its prey. It was one of the largest of the Placoderms, a group of armored fish that are now extinct. 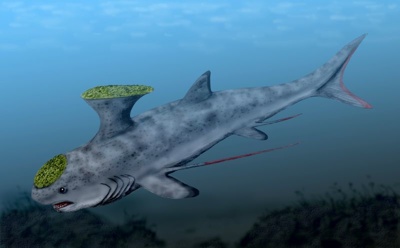 Sharks have lasted for over 400 million years. Although they have remained relatively unchanged throughout the fossil record, there are definitely some odd balls. This particular shark had an anvil-shaped dorsal fin, with small spikes on it, as well as having a very bizarre growth on its head. The fin could have been used for courtship or for defense. 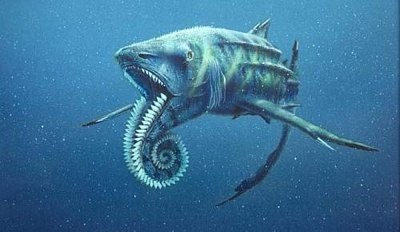 This bizarre fossil was originally thought to be an ammonite, as the fossil looked like a spiraling, circular shell. However, after some examination, it was revealed that is wasn’t a shell, but a spiraling set of shark teeth, a “tooth whirl”. Unfortunately, due to a lack of a body (cartilage does not fossilize as well as bone), so a guessing game began. It was guessed to be on the shark’s dorsal fin, tail, or even its snout. Thankfully, a skull of a related shark, Ornithoprion, was found to have a tooth-whirl on its lower jaw. The tooth whirl likely contained all of the shark’s teeth that it would use in its life: its older teeth would be moved away to make room for its newer, better teeth. This does not solve the problem yet, however! The tooth whirl was then placed on the tip of the lower jaw but it turns out that that would actually slow down the shark! Perhaps the most accurate representation is one where the tooth whirl existed deep in its mouth instead. The only fossil of this dinosaur is a pair of arms. These arms look like they belonged to an ornithomimid but they were 8 feet long. This means that either Deinocheirus towered over the rest of the ornithomimids (and most theropods, since, regarding proportions, it would have been 40 feet long!) or it simply had very long arms for its body. The use of its arms is debated: some say it used them to tear apart large dinosaurs, others say that the claws were too blunt, so they were used as defensive weapons. Some have even said that Deinocheirus used its huge arms to climb trees, although this hypothesis is widely disregarded. Once again, the lack of a body leaves many questions unanswered.

This elusive fossil was discovered by the famed paleontologist Edward Drinker Cope, the same man who competed with Othniel Charles Marsh in the infamous “Bone Wars”. Cope discovered many prehistoric fossils, but this one is, by far, the oddest. The only fossil that exists of it was a single vertebra fragment. It was 5 feet high, estimated to be 8.8 feet high if the entire fossil was intact. Compare that to your vertebrae. Yeah. Estimates vary, but they range from 131 to 196 feet in length, making it, by far, the longest creature ever, competing with the blue whale for being the heaviest creature ever (along with another, very elusive sauropd, Bruhathkayosaurus). But, as luck would have it, the fossil just disappeared. It vanished without a trace. Was it a hoax? A misconception? Or was it really the largest animal to ever walk the earth? Sadly, we will probably never know.