That’s right, it’s that time of year once again. And as Hank Williams Jr. would ask, “Are you ready for some football?” Here at Listverse we are, and so we present the Top Ten Most Memorable NFL Moments. Just a few notes, before we begin:

– Moments such as “The Catch” are not included because they have previously be mentioned on lists. Check out this list for more. So please, no hate mail from 49ers fans.

– For those not accustomed to American football, here are some pointers to understand the lingo. In football you are given 4 downs, or plays, in order to gain ten yards and pick up a new set of downs. So on a first down, you are at 1st and 10. If you pick up two yards on the play it is a 2nd and 8. If 8 or more yards are gained on that play, it is now another 1st and 10. If the offense does not pick up a first down, the ball is turned over, or the offense can decide on 4th down they would rather punt the ball away to put the opposing team further down the field.

The Philadelphia Eagles’ season was coming to an abrupt halt. It was the final quarter of a divisional playoff game and they were losing to the Green Bay Packers by 3 points. They had just over a minute left in the game and a fresh set of downs, when Donovan McNabb threw an incomplete pass. The Eagles were penalized for a false start for 5 yards before 2nd down. Once they started the play McNabb was sacked for a loss of 11 yards. Facing a 3rd down and 26 yards to go for a first, McNabb threw another incomplete pass. So in very real terms, the Eagles had to pick up 26 yards in one play, or else their season was over. The Packers were ready to celebrate, since they were now all but promised a berth in the NFC Championship game. But it was not to be for the Packers. A perfect throw by McNabb and a catch by Freddie Mitchell, led to a 28 yard gain, and the Eagles’ season wasn’t over yet. David Akers came onto kick the field goal, and then another in overtime to win the game.

With the clock running down in the 4th quarter of a game against their biggest rivals, most teams would simply kneel the ball, to tick off those last few seconds and end the game without any risk. But the New York Giants, facing the Philadelphia Eagles, decided instead to attempt a run. Quarterback Joe Pisarcik handed off to Larry Csonka, who never had control. The ball fell to the ground, bounced once, and was scooped up by Eagle’s cornerback Herman Edwards who sprinted the 26 yards to win the game. The Miracle at the Meadowlands changed the season for both squads. The Eagles earned a playoff spot while the Giants finished last in their division. The play also changed the way teams all across the league handle those final seconds of a game. The final seconds of the game are above, note the commentator reading off the credits, assuming the game is over. 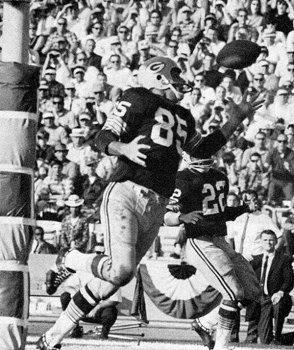 The one that started it all had to have a spot on this list. In 1966 the long established National Football League Champion was set to face the American Football League Champion in a matchup not even called the Super Bowl for another year. The Green Bay Packers and Kansas City Chiefs were not evenly matched, but the Chiefs managed to hold their own for the first half, entering halftime down only four points. In the 2nd half, Vince Lombardi’s Packers took over and crushed the champions of the rival league by a final score of 35-10. The game would set the stage for Super Bowls of the future, as well as assist in laying the groundwork for the future merger.

In a wild card playoff game in 2000, the Tennessee Titans were on the verge of defeat by the Buffalo Bills. The Bills held a 1 point lead with only 16 seconds remaining. A kickoff was fielded by the Titans’ Lorenzo Neal. Neal handed the ball to Frank Wycheck, who then turned and threw a lateral pass across field to Kevin Dyson who ran the next 75 yards for a touchdown and the win in one of the most exciting plays in NFL history. 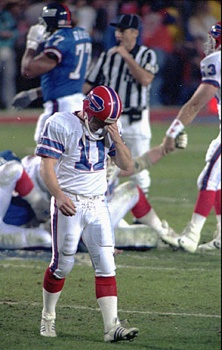 A kicker in the NFL has a simple job, but one that also be magnified more than any other. With eight seconds remaining in Super Bowl XXV, the Buffalo Bills were trailing the New York Giants 20-19, when they called in veteran kicker and team leader in points scored, Scott Norwood to make a 47-yard field goal to win the game. The snap and placement of the ball was perfect, Norwood couldn’t ask for better conditions to become a hero. His kick had the distance, but it sailed wide right. Time expired on the next play as the Giants ran out the clock and Norwood blew his chance for immortality.

Kevin Dyson came as close to winning a Super Bowl as physically possible, but unfortunately for the Titans, Dyson was on the wrong side of this moment. Super Bowl XXXIV pitted the Tennessee Titans vs. the St. Louis Rams. The Titans were trailing 23-16 and putting together an amazing drive with time running out. From the ten-yard line, the Titans were a touchdown away from forcing the Super Bowl into overtime. With six seconds remaining, quarterback Steve McNair dropped back into the pocket and threw to the right side where Kevin Dyson was streaking towards the end zone uncovered. At the last second, Rams’ linebacker Mike Jones pivots, dives, wraps up Dyson’s legs and brings him to the ground. Despite Dyson’s outstretched arm, he did not get into the end zone, and the St. Louis Rams were Super Bowl Champions by one yard. The championship winning tackle can be seen in the clip above. 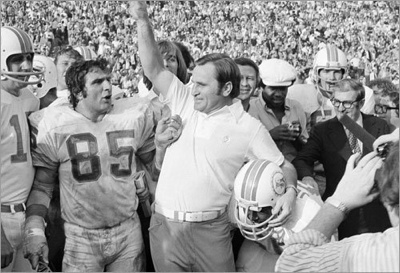 The Miami Dolphins dominated the league from beginning to end in 1972, going 16-0 and winning the Super Bowl. They are the only undefeated team in NFL history. The Dolphins lost their quarterback Bob Griese in week 5, but Earl Morrall stepped into his spot. Super Bowl VII, played in Los Angles, pitted the Washington Redskins against the Dolphins. Somehow, the Redskins were the favorites to win the game, with gamblers giving them a 1 point advantage. The game was dominated by the Dolphins’ “No Name” defense, who only allowed Washington to cross the 50 once in the first half, helping the team to a 14-0 halftime lead. In the 4th quarter of the game, the Dolphins muffed a field goal and Washington returned it for a touchdown. Despite this, the Dolphins hung on and won the Super Bowl 14-7 and completed the first, and to date only, undefeated season in NFL history.

Voted by NFL Films as the Greatest Play in NFL History, this moment came from a divisional play off game between the Oakland Raiders and Pittsburgh Steelers. Facing a 4th and 10 on their own 40 yard line and trailing the Raiders by a score of 7-6 with time running out, the Steelers lined up for a final attempt. Quarterback Terry Bradshaw was pressured by the defense, and threw to his running back. The pass was deflected and then caught, inches from the ground, by a rookie fullback, Franco Harris, who ran the ball all the way down the field for a touchdown to take the lead with five seconds remaining. The play was given the nickname Immaculate Reception by a Pittsburgh fan who called into a radio broadcaster the night of the game, playing off the Christian term “Immaculate Reception”. The play is usually cited by football historians as the greatest catch of all time. 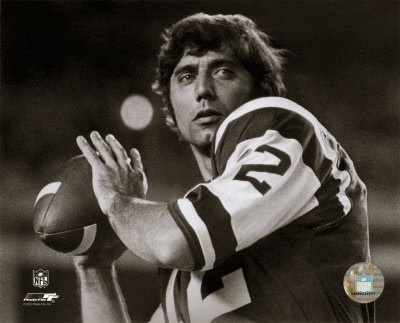 After two blowout Super Bowls, no one considered the possibility that the AFL would be competitive with the NFL. Most commentators and even coaches thought it would be a few years at least until the leagues would be able to merge successfully. The AFL Champion New York Jets were considered a huge underdog against one of the greatest NFL teams of all time, the Baltimore Colts. In front of the press, Joe Namath was heckled by a fan, to which he responded, “We’re gonna win the game. I guarantee it.” Before the game it was a laughable statement, but after winning the MVP award in route to a 16-7 victory, Joe Namath was the only one laughing. This Super Bowl paved the way to a merger of the two leagues and legitimized the AFL, as well as leaving Joe Namath as one of the most entertaining characters on and off the football field.

Has any team in the NFL ever seemed as dominant as the 2007 Giants? They had five receivers that would be starters on any other team. Their point differential was +315 as they took their division by 9 games. Heading into the Super Bowl no one seriously gave the New York Giants a chance. They had been beaten by the Patriots a month ago and Bill Belichek and Tom Brady seemed ready to dominate and seal their places in history with a third title in four years, and only the second undefeated NFL season in history. With 2:39 left on the clock, the Giants were down by 4, and then “The Drive” began. Eli Manning led his team 83 yards on 12 plays climaxing with a spectacular move away from a sack and a breath-taking pass caught with fingertips by David Tyree and somehow secured against his helmet. Plaxico Burress caught a touchdown on a fade route moments later and sealed one of the greatest Super Bowls of all time.