In the past we gave you a list of ten myths about the Romans. Today, to complement that list we are giving you ten facts. Roman society existed in one of the most fascinating periods of history. Many of the aspects of Roman life continue on to the present day and we certainly have a lot to thank them for in terms of culture and law and, of course, our calendar. This list looks at ten aspects of Roman life that are particularly interesting and (hopefully) not especially well known.

While it is well known that the Romans worshipped many gods, there was, in fact, an official state god. This god was named Sol Invictus (the unconquered sun) and was created by the emperor Aurelian in 274 AD and continued, overshadowing other cults in importance, until the abolition of paganism under Theodosius I (on February 27, 390). The Romans held a festival on December 25 of Dies Natalis Solis Invicti, “the birthday of the unconquered sun.” December 25 was the date after the winter solstice, with the first detectable lengthening of daylight hours. There was also a festival on December 19. Though many Oriental cults were practiced informally among the Roman legions from the mid-second century, only that of Sol Invictus was officially accepted and prescribed for the army. Emperors up to Constantine I portrayed Sol Invictus on their official coinage and Constantine decreed (March 7, 321) dies Solis — day of the sun, “Sunday” — as the Roman day of rest. Just like today, Romans lived in a variety of different dwellings depending on class. The rich had villas (our rich have McMansions), and the poor lived in small apartments over shops – just as many city-dwellers do today. Roofs were not allowed to be higher than 17 meters (during the reign of Hadrian) due to the danger of collapse, and most apartments had windows. Water would be brought in from outside and residents would have to go out to public latrines to use the toilet. Because of the danger of fire, the Romans living in these apartments were not allowed to cook – so they would eat out or buy food in from takeaway shops (called thermopolium). It is amazing to see how these aspects of life have barely changed – our homes may look different, but in many ways we are the same as the Romans. 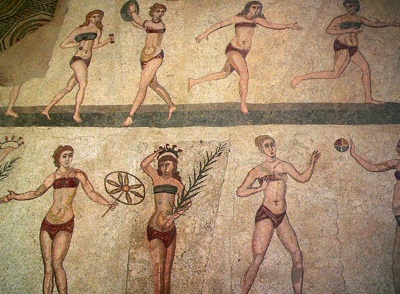 The closest thing Romans had to underwear was a subligaculumIt could come either in the form of a pair of shorts, or in the form of a simple loincloth wrapped around the lower body. It could be worn both by men and women. In particular, it was part of the dress of gladiators, athletes, and of actors on the stage. The subligaculum could be worn under a tunic but men who were standing for public office would sometimes just wear the subligaculum and nothing else. Roman Women also sometimes wore a band of cloth or leather around their upper body. (strophium or mamillare) as can be seen in the picture above. 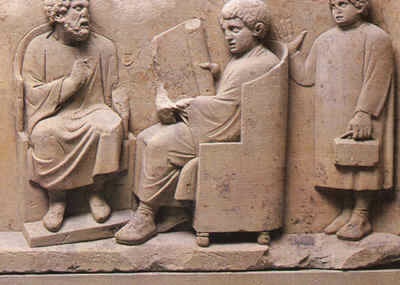 Education was very important to the Ancient Romans. The rich people in Ancient Rome put a great deal of faith in education. While the poor in Ancient Rome did not receive a formal education, many still learned to read and write. Children from rich families, however, were well schooled and were taught by a private tutor at home or went to what we would recognise as schools. In general, schools as we would recognise them, were for boys only. Also, Roman schools were rarely an individual building but an extension of a shop – separated from the crowd by a mere curtain! Learning in Roman schools was based on fear. Boys were beaten for the slightest offence as a belief existed that a boy would learn correctly and accurately if he feared being caned if he got something wrong. For boys who continued to get things wrong, some schools had a policy of having pupils held down by two slaves while his tutor beat him with a leather whip. [Source] At the time of the first Christians, St Peter, the first Bishop of Rome (and thus first Pope) was put to death by being crucified upside-down in the Circus of Nero – a large open-air venue used for public events. His body was buried there. A mere 200 years later, the Roman Emperor Constantine I legalized Christianity and donated the Circus of Nero to the Church for what is now known as Old St Peter’s Basilica. It took only 30 years to build and survived until 1506 when it was demolished by Pope Julius II in order to make way for the Basilica which stands in its place today and remains the seat of the Papacy. The irony of the fact that the seat of the oldest and largest Christian population in the world stands on the spot where the first attempts were made to destroy the new religion is obvious. Given the temporal power the Church wielded (and still does to a certain degree, though more through influence now), one could say that the Roman Empire is still at the heart of Western society. A different lifestyle also meant that the eating habits of the Ancient Romans were different to ours today. Breakfast (the Romans called this jentaculum) was taken in the master’s bedroom and usually consisted of a slice of bread or a wheat pancake eaten with dates and honey. Wine was also drunk. Lunch (the Romans called this prandium) was eaten at about 11.00 a.m. and consisted of a light meal of bread, cheese and possibly some meat. In many senses, everything was geared up towards the main meal of the day – cena. This was eaten in the late afternoon or early evening. If the master of the house had no guests, cena might take about one hour. If he did have guests, then this meal might take as long as four hours. A light supper was usually eaten just before the Romans went to bed, consisting of bread and fruit. The Romans were usually not big meat eaters and a lot of their normal meals involved vegetables, herbs and spices together with a wheat meal that looked like porridge. Petronius described a luxurious dinner thus:

“We were invited to take our seats. Immediately, Egyptian slaves came in and poured ice water over our hands. The starters were served. On a large tray stood a donkey made of bronze. On its back were two baskets, one holding green olives, and the other black. On either side were dormice, dipped in honey and rolled in poppy seed. nearby, on a silver grill, piping hot, lay small sausages. As for wine, we were fairly swimming in it.”

For those keen to try some home-cooked Roman food, here is a recipe for dormice: Stuff the dormice with minced pork or the meat of other dormice chopped up with herbs, pepper and pine nuts. Sew up the dormice and cook in a small oven. [Source] Before you jump up and down about the idea of eating mouse-like rodents, you should know that they are still a popular food in Slovenia. Pictured above is an edible dormouse and a Slovenian stew made from them. Not only did the Romans use guard dogs to guard their houses, they also used “beware of the dog” signs. Petronius in his Satyricon mentions them: “There on the left as one entered…was a huge dog with a chain round its neck. It was painted on the wall and over it, in big capitals, was written: Beware of the Dog.” One wonders whether we will one day discover a sign for chariots which says “infantia in carrus” (my appalling translation of “baby on board”.) Pictured above is an authentic “beware of dog” (cave canem) mosaic from Pompeii. 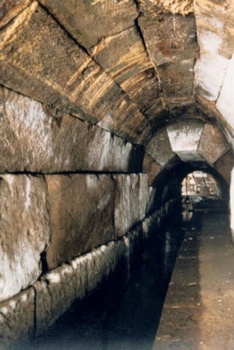 The Romans were a very clean people, taking regular communal baths. They had two main supplies of water – high quality water for drinking and lower quality water for bathing. In 600 BC, the King of Rome, Tarquinius Priscus, decided to have a sewer system built under the city. It was created mainly by semi-forced laborers. The system, which outflowed into the Tiber river, was so effective that it remains in use today (though it is now connected to the modern sewerage system). It continues to be the main sewer for the famous amphitheater. It was so successful in fact, that it was imitated throughout the Roman Empire. 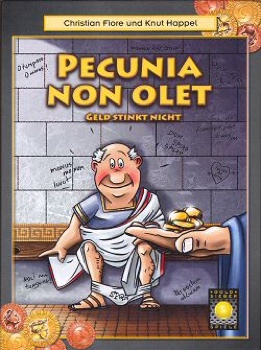 Pecunia non olet means “money does not smell”. This phrase was coined as a result of the urine tax levied by the Roman emperors Nero and Vespasian in the 1st century upon the collection of urine. The lower classes of Roman society urinated into pots which were emptied into cesspools. The liquid was then collected from public latrines, where it served as the valuable raw material for a number of chemical processes: it was used in tanning, and also by launderers as a source of ammonia to clean and whiten woollen togas. There are even isolated reports of it being used as a teeth whitener (supposedly originating in what is now Spain). When Vespasian’s son, Titus, complained about the disgusting nature of the tax, his father showed him a gold coin and uttered the famous quote. This phrase is still used today to show that the value of money is not tainted by its origins. Vespasian’s name still attaches to public urinals in France (vespasiennes), Italy (vespasiani), and Romania (vespasiene). 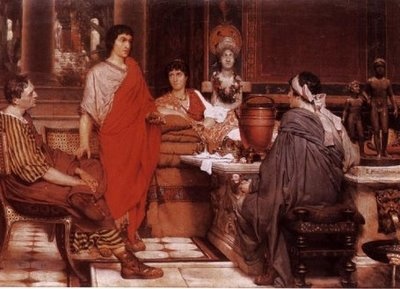 Gaius Valerius Catullus (ca. 84 BC – ca. 54 BC) was a Roman poet of the 1st century BC. His surviving works are still read widely, and continue to influence poetry and other forms of art. Now the Romans were extremely fond of poetry, humor, and obscenity. In fact, so obsessed were they with obscenity that the Latin language contains many very specific sexual terms. For example, cinaede is the term used to describe a person who is being anally penetrated and pedacabo is the the term for the person doing the penetrating. The verb irrumare means “to insert one’s penis into another person’s mouth for suckling”. So how does this relate to Catullus? It turns out that he wrote one of the most obscene pieces of poetry ever. It was considered so bad that a full English translation did not exist until the 20th century. Here is the translation:

It definitely sounds nicer in the Latin!

Text is available under the Creative Commons Attribution-ShareAlike License; additional terms may apply. Some or all text is derived from Wikipedia.