A “Furry” comic is a comic that involves Human/animal anthropomorphic characters, and is popular with folks who refer to themselves as “Furry” or fans of Anthropomorphic animals. Because of the odd subject matter many furry comics see only limited success and are often overlooked by mainstream fans (though this isn’t always the case, as with #1 on this list) after reading and reviewing many furry comics over many years, I submit what I believe are the ten best of all time. 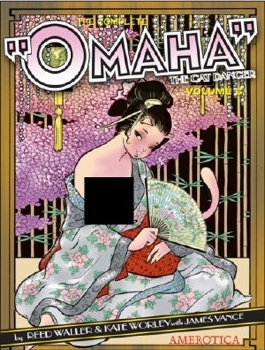 One of the very first long-running Furry comics running from the late 70’s into the early 80’s focusing on the life of Omaha, an exotic dancer and her friends. It was revolutionary in many respects, it was the first “furry” comic that wasn’t cartooney or aimed at children, and it depicted things like drug abuse, homosexuality, divorce and other edgy issues without batting an eye. Omaha enjoyed a long run for an independently produced comic, and even had a theme song, “Dance my Tail off” recorded by creator Reed Waller’s band. The song was only available as a small vinyl record packaged with one of the comics. This record is exceedingly rare and has fetched hundreds on e-bay. 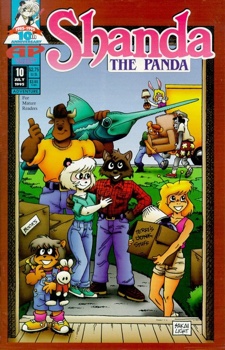 Many consider this comic the “Spiritual Successor” of Omaha, Shanda the Panda shared many similarities such as mature subject matter and a focus on real life situations. (there was even a crossover between the two comics written but never released) The story focuses around a movie theater manager, Shanda Bruin and the lives of her and her staff, each having their own extensive back stories. There are hippy rabbits, Jewish moths, and Lesbian crickets. Shanda has become so well loved because it’s not an action fantasy that takes you out of your world, it’s a simple story about life and love that anyone can relate to. The art was originally done by cartoonist Mike Sagaria, and was later helmed by furry art legends Michelle Light, Terrie smith and Christina “Smudge” Hansen. It’s still running today in it’s 50th issue. 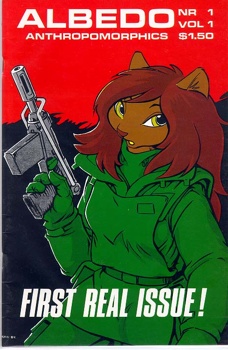 Albedo was printed in the early 80s as an “anthology” comic, or a series of short stories by various artists and writers. While most of Albedo’s stories are memorable, (including the first appearance of Usagi Yojimbo) their flagship story, “Erma Felna EDF” was by far the best of the bunch. The story is furry, with cartoony, cute characters but it’s also the hardest of the hard sci-fi. It focuses on Erma Felna, a feline commander in the EDF and her adventures dealing with corrupt politicians, rebel groups, and massive government cover ups as well as the more human experience of winding up a divorced single mother. While the story itself is strong the artwork would be beautiful even without a story. With training in traditional fine arts, Steve Galachi’s delicate watercolor artwork makes each page just a pleasure to look at. 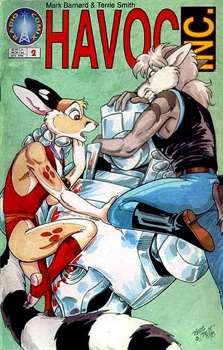 Another hard sci-fi outing, Hovoc INC pioneers the “Comedy space opera” in the anthropomorphic world. Being one short part of a much larger series, (preceded by “Midnight Sonata” and followed by “Crime +”) the six issues of Havoc INC are  entertaining all around, being the adventures of the Hapless Chris Deck and Chester the Ringtail as they run an interstellar cargo business that specializes in hazardous cargo. The comic is also a popular gay comic, as these two main characters are a couple, but being straight myself I found this sub-plot not to take anything away from the main story. Terrie Smith’s incredible artwork doubtless makes this series, she has a mastery of expression and all the space age tech looks pleasingly like the tech of 1950’s serials with shiny rocket ships and campy ray guns. Printed somewhat sporadically, Havoc INC may or not still be in print but according to the web site (last updated about six years ago) a new issue is “on the way”. 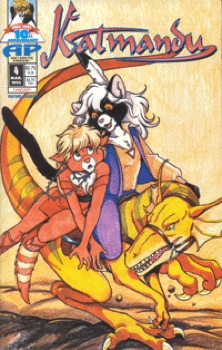 The Storyline of Katmandu is almost impossible to summarize due to it’s utter complexity and uniqueness, but I’ll make an honest attempt. Katmandu is about Leahtra and Thorin, a married couple living in an alternate world populated by feline-like humans. Each issue Leahtrah tells a story to her children about her ancestor, Liska Mitsa el Aman, who live 200 years earlier in a world based around native American legends and folktales. This sounds like a complete summary but trust me it’s not. The storyline is vast, and while it’s told in simple little bites, you feel as if there’s a lot you’re missing. Both stories, the one in the present and the past tie into one another flawlessly. The art has been done by numerous artists, two standouts being Shawntae Howard and furry legend Terrie Smith. 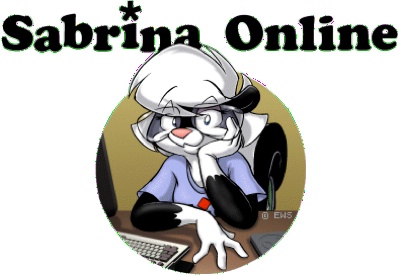 The only the comic to make the list that is a free online web comic though it has been made available in collected online volumes. The three panel comic drawn and written by cartoonist Eric Schwartz follows the adventures of nerdy but loveable skunk girl Sabrina and her roommate Amy the squirrel. The strips are classic nerd humor with jokes about everything from playing Quake to online dating. 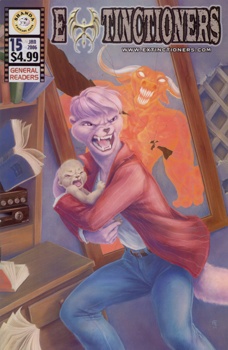 One of the few straight-up superhero titles that edges into the furry realm, Extinctioners is pure silver age comic superhero goodness with  vibrant Furry art by Shawntae Howard. The story revolves around a team of anthropomorphic superheroes defending their world from evil invaders from space who turn out to be . . .human beings. A fascinating read for anyone that likes the silver and bronze age X-men.

The comic has always had a schizophrenic publishing schedule (there can be 3 months between issues) and with a recent change in publishers it’s unclear if the comic is even still in print. It’s well worth the search for incredibly rare back issues such as the first and second issues released in digital color, and the hard to find Extinctioner annuals (tales of the endangered) featuring art from the comic’s loyal cult of fans. Another curious item is this comic’s “Soundtrack” with features techno tracks based around the characters, and a ton of concept artwork as data on the CD. Hard to find, but well worth the search for the artwork alone. 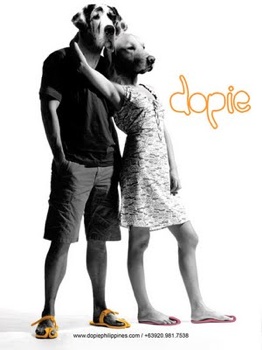 A one Shot from Doug Cernan, “The Suit” is perhaps one of the overlooked classics of Anthropomorphic literature. It’s a fascinating sci-fi story that tells the life story of an Anubian alien named Walter fang, who looks strangely like a human/dog hybrid. The hatred and bigotry he experiences is a fascinating parallel to the condemnation that many furries experience in everyday life, and mirrors the feelings of oneness we finally realize when we begin to find others like ourselves. Drawn in a unique style that is reminiscent of the art found in “the New Yorker’s” one panel cartoons, everything about this one shot graphic novel is unique and interesting. [I have used the image above as I can not find one for this item.] 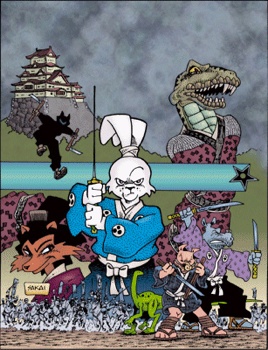 Roughly translated as “Rabbit Bodyguard” this adventure comic has been going strong for well over 20 years and garners a loyal fan following. The comic follows the adventures of Miyomato Usagi (A parody of the famous swordsman Miyomato Musashi) as he wanders Edo-era Japan (populated entirely by anthropomorphic animals) defending the innocent and dealing out punishment on evildoers. And when I say punishment, I mean it. Despite the lack of blood and gore, the comic was recognized by Wizard magazine as having the second highest body count of any comic in history (Second only to Marvel’s Conan series). The action is great and the art is clean and extremely detailed. Author and artist Stan Sakai pens brilliant stories that make the reader just ache for the next issue to come along. Truly a modern classic, furry or otherwise. 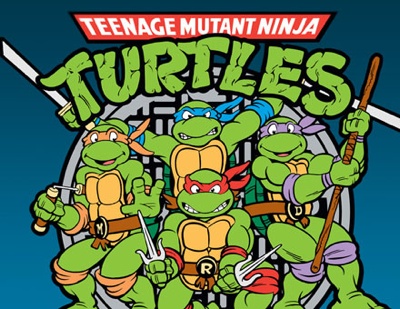 While not being identified as a “furry” comic to most modern readers (or a comic book at all), TMNT indeed had it’s start as a small press comic that was popular in the furry community. The original comic was dark and gritty, and explored complex social issues. It was a far cry from the watered down cartoon series formed in the late 1980’s. The original sprang up in furry circles after advertising in Albedo Anthropomorphics and other furry comics; it was originally mimeographed in creator Peter Laird’s basement and distributed to only local comic stores. As readers started to see the charm of the title, it transcended the underground comics market to become a multimedia sensation that crossed TV, movies and video games. According to a nationwide survey in 1992 the turtles were more recognizable to children than Santa Clause. By far the best furry comic of all time.