There has been much news of late about space – from NASA bombing the moon to discoveries on Mars. I am fascinating by outer space and the images we are receiving daily from our outer space vessels seems to be getting better and better. For that reason it seemed appropriate to create a second list of stunning images of space. Here is the original list for those interested. As usual, click the image for a larger view.

This stunning image of Saturn was captured by the incredible Cassini spacecraft in 2006 as it passed behind the ringed gas giant in the 9th year of its mission. Even more incredible it that the pale-blue dot of the Earth can be seen in this image just above and to the left of the bright, main rings. [Source] 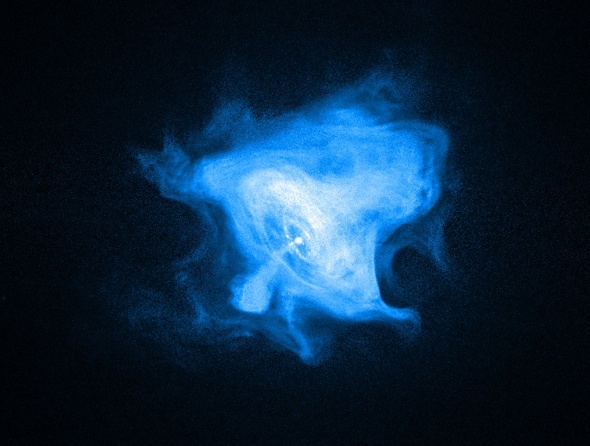 The Crab Pulsar, a city-sized, magnetized neutron star spinning 30 times a second, lies at the center of this remarkable image from the orbiting Chandra Observatory. The deep x-ray image gives the first clear view of the convoluted boundaries of the Crab’s pulsar wind nebula. Like a cosmic dynamo the pulsar powers the x-ray emission. With more mass than the Sun and the density of an atomic nucleus, the spinning pulsar itself is the collapsed core of a massive star. The stellar core collapse resulted in a supernova explosion that was witnessed in the year 1054. [Source] 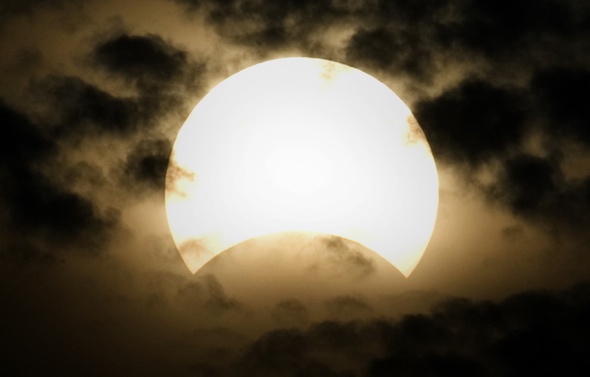 A partial solar eclipse is seen through clouds in Hyderabad, Pakistan on Wednesday, July 22, 2009. [Source] 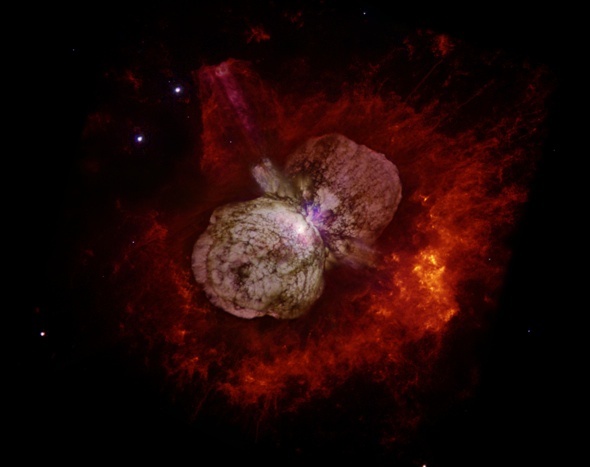 Eta Carinae is a stellar system in the constellation Carina, about 7,500 to 8,000 light-years from the Sun. The system contains at least two stars, one of which is a luminous blue variable star. Its combined luminosity is about four million times that of the Sun and has an estimated system mass in excess of 100 solar masses. 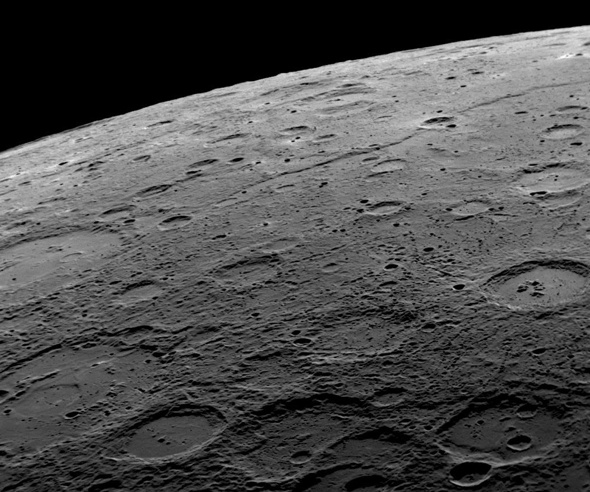 This dramatic NAC image was acquired about 56 minutes prior to MESSENGER’s closest approach during the mission’s October 6, 2008 Mercury flyby. You almost feel like you could reach out and touch it. [Source] 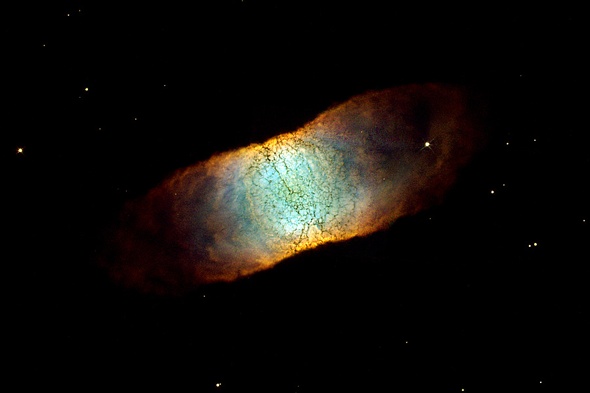 Evidence indicates that IC 4406 is likely a hollow cylinder, with its square appearance the result of our vantage point in viewing the cylinder from the side. Were IC 4406 viewed from the top, it would likely look similar to the Ring Nebula. This representative-color picture is a composite made by combining images taken by the Hubble Space Telescope in 2001 and 2002. [Source] 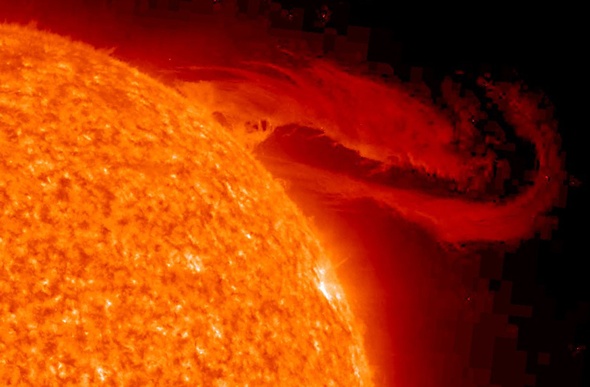 NASA’s STEREO (Ahead) spacecraft observed this visually stunning prominence eruption on Sept. 29, 2008 in the 304 wavelength of extreme UV light. It rose up and cascaded to the right over several hours, appearing something like a flag unfurling, as it broke apart and headed into space. [Source]

3
Jewel Box in the Sky 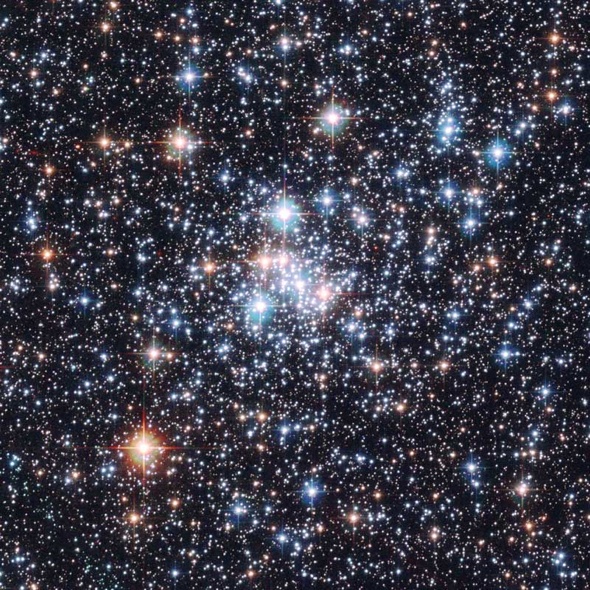 NGC 290 is an open cluster in the Small Magellanic Cloud, which is located in the constellation Tucana.The photogenic cluster, pictured above, was captured recently by the orbiting Hubble Space Telescope. Open clusters of stars are younger, contain few stars, and contain a much higher fraction of blue stars than do globular clusters of stars. 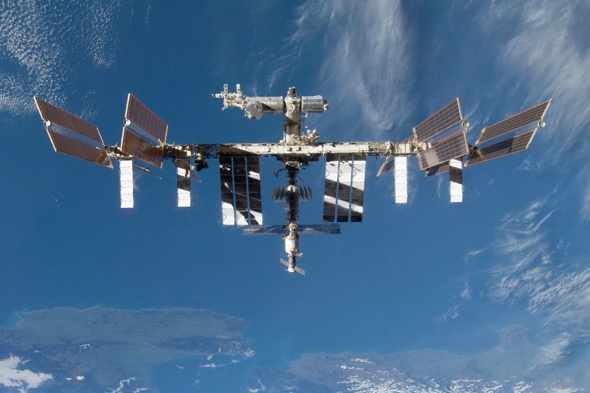 After undocking, the space shuttle Discovery crew got a memorable view of the developing International Space Station (ISS). Pictured orbiting high above Earth, numerous solar panels, trusses, and science modules of the ISS were visible. [Source] 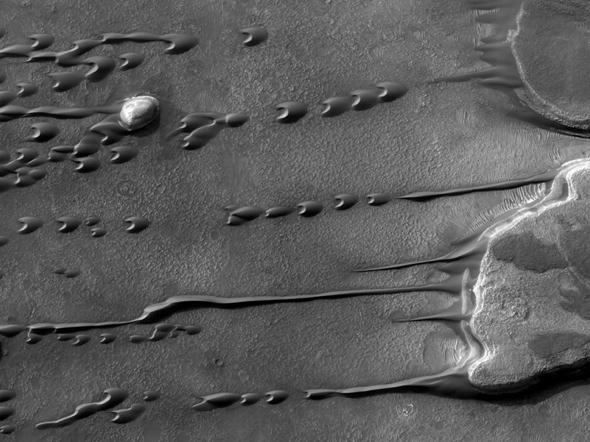 Although liquids freeze and evaporate quickly into the thin atmosphere of Mars, persistent winds may make large sand dunes appear to flow and even drip like a liquid. Visible on the above image right are two flat top mesas in southern Mars, where the season is changing from Spring to Summer. [Source] 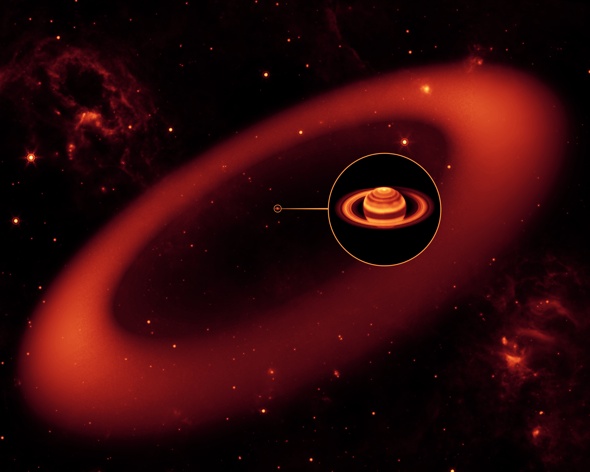 This is a bonus item because it is an artist’s rendition; but it is the only available image so far. On 6 October 2009, the discovery of a tenuous ring of material in the plane of and just interior to the orbit of Phoebe (one of Saturn’s moons) was announced (it has been called the Phoebe ring). It is tilted 27 degrees from Saturn’s equatorial plane (and the other rings) and it is virtually invisible to the naked eye.