It is probably obvious to many who have been around listverse for the last two years, that one of my favorite horror movies is the Exorcist. I have watched it countless times and love trivia relating to the picture. After watching it for the umpteenth time last night, I decided to post a list of trivia excerpts about the film (which seems apt as Halloween is nearly here and I am hoping to do a list on real exorcisms soon).

This list is mostly derived from IMDB and MovieMistakes as they essentially summarize all that the director and actors have said about the film. There really is little I can add (hence the future list on exorcism). Be sure to watch the movie at least once this halloween. These facts relate to the original film release (and I recommend that as the one to watch – the new release version contains scenes that upset the balance of the film). 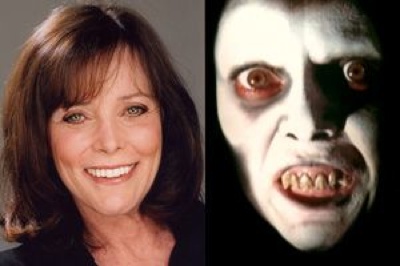 1. The young priest who gave Father Karras confession at the end of the film was (and still is) a Catholic priest (Reverend William O’Malley). In order to make him visibly shocked in the final scene, the director (William Peter Blatty) slapped him across the face unexpectedly and yelled “action!” Father O’Malley still teaches to this day at Fordham University.

2. On the first day of filming the exorcism sequence, Linda Blair’s delivery of her foul-mouthed dialogue so disturbed the gentlemanly Max von Sydow that he forgot his lines.

3. Very brief cutaways appear in the film in order to make the audience uneasy. The most famous is the demon face (seen above) – the face was that of Eileen Dietz who also starred in Happy Days and General Hospital. The face is, to me, the most memorable scene from the film and it still gives me a fright when I see it.

5. The scream of the demon being thrown out of Linda Blair was actually created by recording squealing pigs being driven into slaughter. 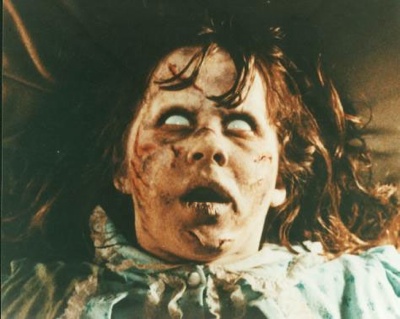 6. Ellen Burstyn received a permanent spinal injury during filming. In the sequence where she is thrown away from her possessed daughter, a harness jerked her hard away from the bed. She fell on her coccyx and screamed in pain – this was caught on film and adds to the realism of that scene.

7. The refrigerated bedroom set was cooled with four air conditioners and temperatures would plunge to around 30 to 40 below zero. It was so cold that perspiration would freeze on some of the cast and crew. On one occasion the air was saturated with moisture resulting in a thin layer of snow falling on the set before the crew arrived for filming. This obviously negated the need for fake breath mist which is prevalent in many modern movies.

8. When originally released in the UK a number of town councils imposed a complete ban on the showing of the film. This led to the bizarre spectacle of “Exorcist Bus Trips” where enterprising travel companies organized buses to take groups to the nearest town where the film was showing.

9. A filmgoer who saw the movie in 1974 during its original release fainted and broke his jaw on the seat in front of him. He then sued Warner Brothers and the filmmakers, claiming that the use of subliminal imagery in the film had caused him to pass out. The studio settled out of court for an undisclosed sum. The film affected many audiences so strongly that at many theaters, paramedics were called to treat people who fainted and others who went into hysterics.

10. If adjusted for inflation, the Exorcist would be the top grossing R-rated film of all time. 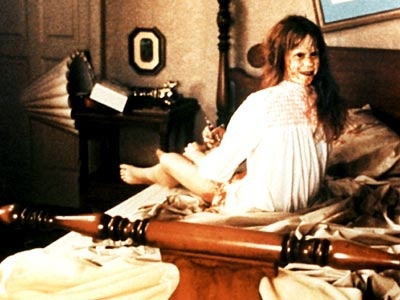 11. Due to its controversial material, this movie was not available on video in the UK until 1999 when the British Board of Film Censors (BBFC) approved an uncut version.

13. Director William Friedkin asked technical advisor Reverend Thomas Bermingham to exorcise the set. He refused, saying an exorcism might increase anxiety. Rev. Bermingham wound up visiting the set and gave a blessing and talk to reassure the cast and crew.

14. Gonzalo Gavira was called on to create many of the special sound effects after William Friedkin recalled his work from El topo (1970). One of the more memorable sounds, the 360-degree turning of Regan’s head, was actually made by twisting a sound crew member’s old leather wallet in front of a mike.

15. William Peter Blatty based his novel on a supposedly genuine exorcism from 1949, which was partially performed in both Cottage City, Maryland, and Bel-Nor, Missouri. Several area newspapers reported on a speech a minister gave to an amateur parapsychology society, in which he claimed to have exorcised a demon from a 13-year-old boy named Robbie, and that the ordeal lasted a little more than six weeks. 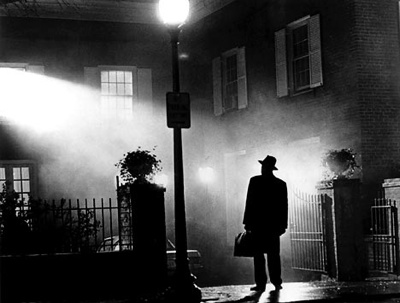 16. One of the most famous scenes in the movie and the shot used for the posters and the cover of the DVD/VHS releases was inspired by the 1954 painting “Empire of Light” (“L’Empire des lumières”) by René Magritte. It is the scene where Fr. Merrin steps out of a cab and stands in front of the MacNeil residence bathed in an eerie glow.

17. Linda Blair injured her back when a piece of the rig broke as she was thrown about on the bed

18. Linda Blair received her Best Supporting Actress Oscar nomination before it was widely known that previous Supporting Actress winner Mercedes McCambridge had actually provided the voice of the demon. By Academy rules once Blair was given the nomination it could not be withdrawn, but the controversy about Blair being given credit for another actress’ work ruined her chances of winning the award.

19. For the vomiting sequences, Eileen Dietz doubled (uncredited) for Linda Blair, and later sued unsuccessfully for puking credit. Makeup veteran Dick Smith rigged Dietz’s facial contours with sheets of heat-formed plexiglass that were secured at the corners of her mouth and behind her head. A camouflaged nozzle anchored in Dietz’s oral cavity provided the apparatus through which the “vomit” could be forcefully discharged, fed by supply tubes discreetly embedded in the plexiglass on both sides of her face. Such was the complexity of the set-up that Dietz could barely swallow or close her mouth.

20. The “Exorcist steps”, 75 (or 74 – one is very small) stone steps at the end of M Street in Georgetown, were padded with 1/2″-thick rubber to film the death of Father Karras. The stuntman tumbled down the stairs twice. Georgetown University students charged people around $5 each to watch the stunt from the rooftops. 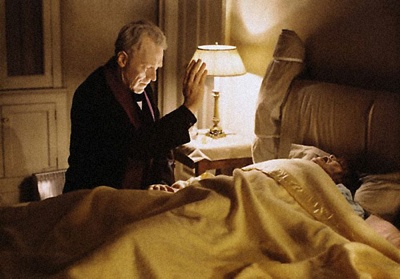 21. Due to death threats against Linda Blair from religious zealots who believed the film “glorified Satan”, Warner Bros. had bodyguards protecting her for six months after the film’s release.

22. The demon that possesses Regan MacNeil is actually named Pazuzu, however the demon’s name is never mentioned in any way in either version of ‘The Exorcist’ (or ‘The Exorcist: The Restored Version’). During the film Pazuzu lies to Father Damien Karras claiming to be the actual Devil. Conversations with Father Lankester Merrin show this claim to be false

23. Mercedes McCambridge regurgitated on a mixture of chewed, mushy apple and raw egg to produce the sound effect of Regan’s projectile vomiting.

24. At one point the search for a young actress capable of playing Regan was so trying that William Friedkin claims he even considered auditioning adult dwarf actors.

25. There are tales about ominous events surrounding the year-long shoot, including the deaths of nine people associated with the production and stories about a mysterious fire that destroyed the set one weekend. Actors Jack MacGowran (who played Burke Dennings) and Vasiliki Maliaros (Father Karras’ Mother) died before the film was released.