Warning: spoilers. Just over a week ago we had our first list of must-see episodes of the Twilight Zone – the excellent show celebrating its fiftieth anniversary this year. I was so inspired that I began to download the whole set of episodes. I am, therefore, pleased that a second list of must-see episodes has arrived in my inbox. You can be assured that the twenty total episodes on both lists will be the first ones I watch.

This story has no supernatural element, but still works within the program’s ‘world’. Set in a gentleman’s club, it tells the tale of a young man who cannot stop talking. One of the elder members, Franchot Tone in a great performance, exhausted by the young man’s constant chatter, bets him a large sum of money to remain silent for a year. Look out for the scene where he visits the young man in his glass room and tries to force him to speak by suggesting his wife is being unfaithful to him. There’s a strong ending, too, when the young man reveals he has had his vocal cords cut out in order to win the bet.

This is basically a development on Season 1’s ‘The Monsters Are Due on Maple Street’. As the radio reports a sighting of a nuclear missile heading toward America, a man takes his family into the shelter he has built in his basement. Since his friends and neighbors have neglected to do so, they each fight for their right to enter the bunker, too. The growing fear and hysteria causes them to turn against each other, exposing the more animalistic impulses of man. This episode seems to move at a break-neck pace, building, like the earlier story, to a climax where they are a beat away from killing one another. The episode takes the mob rule theme to darker levels since it explores racism more explicitly. We witness at the end the devastation caused when it is reported that it was a false alarm, that the flying object was not a bomb after all. Having exposed the uglier sides to their natures, they return quietly to their homes, arguably more destroyed than they would have been if the missile had hit.

An extremely moody and atmospheric western ghost story with Lee Marvin, Strother Martin and Lee Van Cleef. It tells the tale of a gunslinger who is wagered he cannot visit the grave of the young man he shot. Of course, Marvin takes up the challenge, resulting in a creepy climatic scene at the grave, where you are left unsure whether or not there are such things as ghosts. The initial scene, set in a deserted saloon is intense and brooding.

A cross between a folk tale and a Universal gothic horror film from the 1940s, this is about a man on a walking holiday across Europe who seeks shelter in a hermitage run by a quasi-religious group led by John Carradine. A man is kept imprisoned in a cell who howls horribly into the night from his window. This, the hero is told, is actually the Devil himself, captured by the sect five years before to imprison Evil from the world. It’s quite a spooky episode, more for the idea than execution, and the mood is quite dark. The notion of keeping the Devil locked up in a small room to stop him causing harm to mankind is a powerful conceit. The ending is let down a little by a hokey depiction of Satan – all twirly mustache, satin cape and pointy horns!

6
The Lateness of the Hour 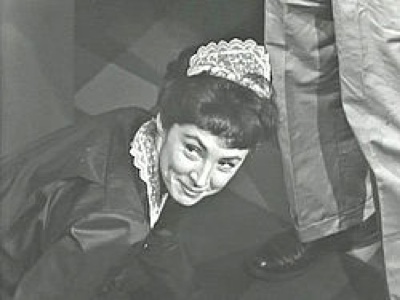 This is the first of six episodes to be videotaped rather than filmed, giving it a different look and style – and it benefits. It is another claustrophobic tale, set in a large, ‘wood-panelled’ household run by a wealthy middle-aged couple who have only human-looking robots for company. It runs like a TV broadcast of a serious short play by Edward Albee or Eugene O’Neill, dealing as it does with isolation, childlessness and life substitutions. Watch out for the scene where the father orders his beloved robot servants to go down to the basement workshop and await his instructions. They know he means to dismantle them – so, coldly, and in unison, they rebel calmly, ineffectually, muttering together sadly why they should be allowed to remain ‘alive’. The performance of Inger Stevens [‘The Hitch-Hiker’, Season 1] as the daughter, realizing gradually that she, too, is a robot, is intense, played as if she is acting a role in Ibsen, particularly when she searches sadly through the family photograph album for non-existent pictures of herself as a child. One of the very best.

5
And When the Sky Was Opened

An excellent example of a story working even though it does not fully explain what has happened. Three pilots return to Earth after a short trip into space, and one by one they simply cease to exist. Where there was once a photograph in the paper of three triumphant pilots posing after their landing, there are soon two, as if the other was never there. Rod Taylor (‘The Birds’, ‘The Time Machine’) plays one of the men, and his disintegration throughout the episode as he begins to realize something ‘out there’ decided that neither of the three should have returned to Earth alive (or should ever have been alive) is very powerful. Just what ‘it’ was that engineered their fate is left to the viewer’s imagination, which, I believe, lends this episode an almost existential layer. It has been criticized for presenting an oblique and unanswered dilemma, but it is just that element that makes this story so intriguing and frightening.

A woman sits in a station very late at night waiting for her bus to arrive. When she asks the attendant if he has any news of the bus’ lateness, he berates her for asking the very same question just a few minutes before. She has no memory of this, and as the episode progresses she begins to wonder if there exists an unseen, alternative version of herself acting on her behalf. For me there is one moment that sends shivers down the spine, merely by the way it’s shot. As she begins to leave the station’s bathroom, she opens the door and catches a glimpse of herself sitting on the seat she vacated just moments ago. There is also a strange and subtly disturbing sequence when a young man, who has tried his best to help the seemingly disturbed heroine, theorizing that everyone has a double in a second dimension who wants to take the place of its original, chases his malevolent and mocking double down a street. It is executed without music and is quite odd.

3
Nightmare as a Child

This episode is pretty grim when you think about it. Helen Foley strikes up a friendship with a strange little girl who seems to know a lot about her childhood. When an older man calls on Helen, and eventually turns out to be the killer of her mother years before, here to kill Helen since she was the only witness, she realizes the child she has befriended out in the hall is in fact herself as she was at the time of the murder – a vision sent to stir up the memories of that terrible time, in order to save herself. Watch how the man subtly tries to find out how much Helen remembers, before deciding she knows enough to be killed.

Another episode I particularly like because it seems to encapsulate so many things I am drawn to: the American Civil War ghosts of Ambrose Bierce, the Southern Gothic of Tennessee Williams & Poe, and the reflective gloom of O’Neill. A woman waits outside her crumbling mansion pining for her husband to return from the war. As she sits waiting for him, a long parade of wounded soldiers pass silently by her gates. What she doesn’t know is that these men are the war’s dead, all making their slow way to the next world. In an especially creepy scene, a soldier on horseback stops for a moment to talk; his face is half-lit in shadow, his voice filled with the weight of death.

I think this is an extraordinary, controversial, and very dark episode – perhaps too dark for the series. It tells the tale of a five year old child, Billy (played by Billy Mumy, the boy-monster in that other amazing Twilight Zone tale, ‘It’s A Good Life’) whose emotional bond with his grandmother is so close that he continues to speak with her even after she has died via a toy telephone she gave him as a birthday present (‘Is it cold where you are, Grandma?’). The parents grow increasingly concerned over his secretive conversations, but more so when he tries to kill himself, first by running in front of a car, and then by throwing himself into the fishpond. It transpires that his grandmother is so lonely in death, she is driven to persuade Billy to die so he can join her. While the child lies close to death from drowning, his desperate father runs upstairs and talks to his mother over the phone, and pleads with her not to allow his son to die; to release him and let him live, to grow into an adult. The actor’s performance in this scene is truly moving, even though he is talking to a dead person through a tiny plastic phone. This episode is powerful throughout, since the subject of an old dead woman tempting a small child into death is so edgy. And the father’s realization that he has been rejected by his mother, even on her death bed in favor of the child, is painful to watch. Look out, too, for the moment when Billy’s mom, thinking her child is playing games, snatches the phone off him and hears the breathing of the dead grandmother, proving that Billy is not imagining his conversations after all. Really spooky, and tastefully morbid.