It’s the most wonderful time of the year—when Christmas-themed episodes and specials dominate television. Everyone has his favorite and most memorable specials, from Rudolph the Red-Nosed Reindeer to A Charlie Brown Christmas.

But what about the weirder holiday specials that have graced our screens? This list collects some of the most bizarre, badly done, and downright confusing specials ever made in the name of Christmas.

Spoiler Alert: For the one or two people who don’t know what happens to Charlie Brown at Christmas, you’re safe. We’re not going to tell you. But if you haven’t seen any other Christmas specials, be careful. There are spoilers ahead! 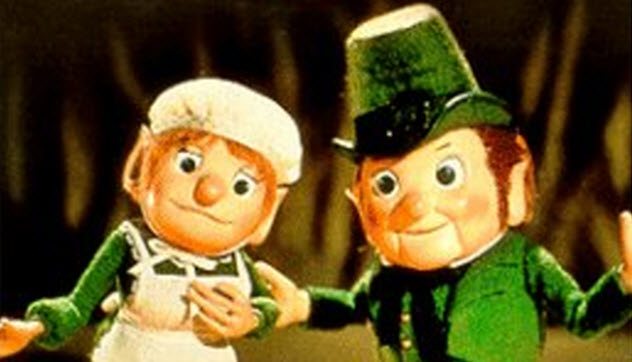 A lot of weird holiday roundups will include Nestor the Long-Eared Christmas Donkey, but Rankin and Bass got a heck of a lot weirder than that in the two choices included on this list. For proof, look no further than The Leprechauns’ Christmas Gold. It seems to have nothing to do with Christmas and everything to do with a banshee named Old Mag the Hag and adorable Irish accents.

This is definitely one of the more obscure specials. It doesn’t have any blogs dedicated to how mind-boggling it is that this perfect Saint Patrick’s Day story got branded as a Christmas tale. In fact, it serves as a cool example of how trippy Rankin and Bass got in their later specials.

While the 1960s were all about fun-loving holiday cheer, the ’80s felt inspired by The Lord of the Rings. The Leprechauns’ Christmas Gold can be watched in its entirety online.[1]

9 The Life And Adventures Of Santa Claus
1985

This is probably an atheist’s best choice for a Christmas special as it attempts to explain every Christmas tradition without an ounce of religion. Based on the book by L. Frank Baum (who is more famous for The Wonderful Wizard of Oz), this was Rankin and Bass’s final Claymation Christmas special.[2]

If that hasn’t already piqued your curiosity, then perhaps you’ll be interested to know that this “Christmas” special includes a dirge that introduces the Council of Immortals, Santa being raised by fairies and a lioness, and a battle of the Immortals that has a dragon.

Remember the California Raisins? They were a huge sensation in the mid-to-late 1980s in a way that seems inexplicable today. You may remember their soulful renditions of Christmas classics in this Claymation special from 1987 that was hosted by . . . dinosaurs.

Tyrannosaurus Rex and his Styracosaurus cohost, Herb, showcase several Christmas talents, all leading up to the creme de la creme—the Raisins’ take on The Temptations’ renditions of Christmas carols. Meanwhile, Rex and Herb spend the interludes arguing over the proper ways to celebrate Christmas, including a long bit about what “wassailing” is.[3]

While the entire special seems cobbled together, it is still worth a nostalgic look to see the California Raisins singing gorgeous Christmas classics—because nothing says Christmas like singing humanoid raisins.

Any conversation about Christmas specials is not complete without someone giving a thorough rundown of all this special’s “wtf” moments. Look no further than its haphazard plot description for proof: Chewbacca and Han Solo visit Chewbacca’s home world to celebrate Life Day. So . . . not even Christmas.

It is also unclear if Life Day is related or in any way similar to Christmas other than gift giving.

We get to meet Chewbacca’s family in this special that seems to think everyone loved Chewbacca the most in Star Wars. Meanwhile, Han Solo and Chewie are pursued by agents of the Galactic Empire, who are searching for members of the Rebel Alliance on the planet.[4]

This Chewie-centric movie appears to have so little to do with Christmas that it really could have been released as a “Life Day” special and no one would have blinked an eye. 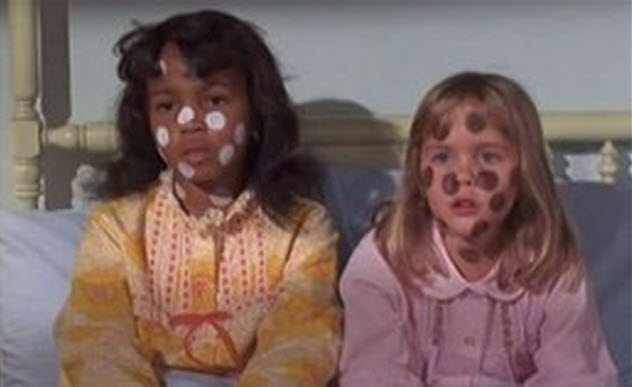 Woof, this Christmas episode was a really bad move from Bewitched. Of course, it should come as no surprise that a show about witches would miss the mark a bit when it came to Christmas. Bewitched actually did several Christmas specials without harming anyone, but that all changed in 1970 with an episode so offensive that star Elizabeth Montgomery had to make an introduction to please the sponsor, Oscar Mayer.

What was so bad?

Well, Tabitha briefly appears in blackface. This is an offensive and dated choice no matter what, but at Christmastime? Yikes.

The plot has very little to do with Christmas itself. Instead, young Tabitha wants to be sisters with her African-American friend Lisa. To make them look more alike, Tabby zaps black polka dots onto her body and white ones on Lisa’s.

Allegedly, this story idea came from a 10th-grade English class at LA’s Thomas Jefferson High School. All 26 students are listed by name in the credits. That helps to explain some of this episode’s naive insensitivity. However, it doesn’t explain why the showrunners and network executives ever let this thing see the light of day.[5] 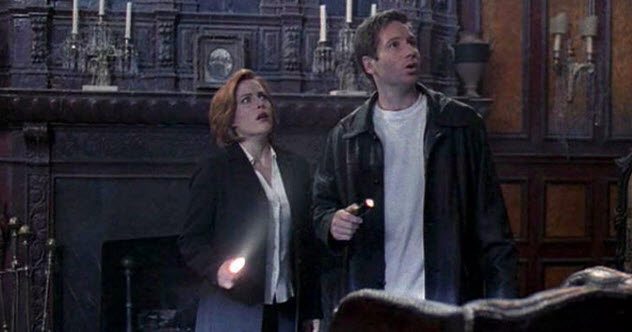 The X-Files provides a great episode, “How the Ghosts Stole Christmas,” that just happens to take place on Christmas. But as far as a festive holiday episode, it completely misses the mark.

This extremely dark show feels like a Black Mirror episode that begins on Christmas Eve with Mulder asking Scully to go with him to check out a haunted house. Although Scully has holiday plans with her family, she accompanies Mulder after he steals her car keys.[6]

This starts to feel like a Halloween episode when Mulder tells Scully that a couple made a murder-suicide pact in this house in 1917. Feeling the holiday cheer yet?

When the ghosts eventually show themselves, Mulder and Scully have to reveal the weirder parts of their relationship that they typically try to hide. It would seem like a dark episode, but the ghosts are played by Ed Asner and Lily Tomlin, who are full of amazing comedic moments.

This episode plays on the time-honored Christmas Carol form of storytelling, with all the paranormal twists that one expects from The X-Files. It’s bizarre in all the best ways.

Like Bewitched before it, this spooky sitcom from the 1960s can’t quite recreate Christmas magic. The weirder part of this special, however, is that it was made decades later in the mid-1990s after the release of the 1995 movie Here Come the Munsters. The ’90s were clearly having a monster moment with The Munsters and The Addams Family releasing films, but this bizarre Christmas special totally misses the mark.

The Munsters gather to give Eddie a traditional Transylvanian Christmas because he feels homesick for Transylvania. It’s a strange plot that was never brought up in the original series and makes you wonder more about The Munsters‘ backstory than this shoehorned Christmas plot.

The story lines are all over the place—from Herman losing his job and working as a nude model in a painting class to Eddie being bullied at school and even to Grandpa accidentally transporting Santa and his elves to their house after an experiment goes wrong. It makes very little sense, so watch it only if you want to have yourself a scary little Christmas.[7] 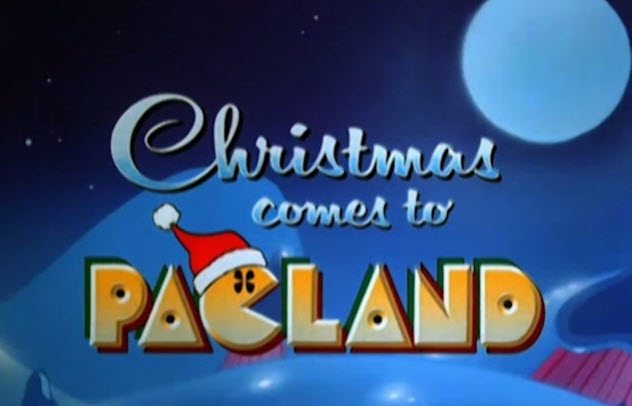 It could be argued that PacLand has no place in Christmas, and that argument would have a lot of merit because this special is bonkers. Splitsider asked in a 2013 article if Christmas Comes to PacLand is the worst special ever.

Although it certainly isn’t the worst, it definitely has earned its spot in the hall of fame for weird Christmas shows. This Hanna-Barbera special feels like a long commercial for Pac-Man.[8]

Pac-Man, Ms. Pac-Man, Pac-Baby, and Pac-Dog are walking through a wintry forest to collect power pellets when they find ghosts that they must attack. Santa makes an appearance that feels completely pointless in this memorably bad TV special from a lousy 1980s television series based on an arcade game.

Emmanuel Lewis and Mr. T were so popular in the early 1980s that they were able to share the screen in this gloriously so-bad-it’s-good Christmas special that warms the heart. Lewis plays a latchkey kid who is wandering the city streets in search of Christmas cheer . . . and possibly some adult supervision.

A sidewalk Santa Claus played by Mr. T helps Lewis out. But cheesy celebrity appearances, including a notable one by magician David Copperfield, make no visible sense. Crazy adventures, such as the pair trying to find out if the Baby Jesus ever smiled, highlight this charming tale. Mr. T also gives several speeches with amazing lines like: “The blessed of us must try to save the less of us.”

This wacky special is worth watching for lines like that and its adorably nostalgic tenderness.[9] 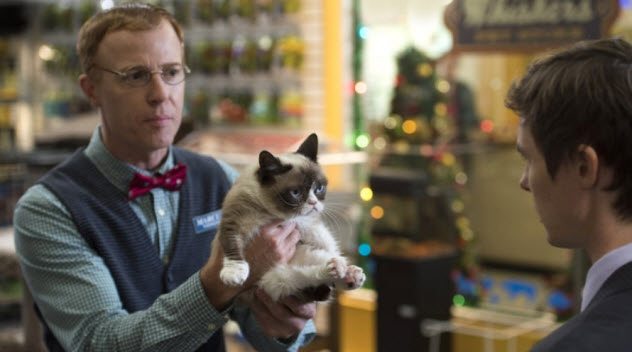 The biggest question surrounding the Grumpy Cat Christmas movie is why it was ever made. The film totally plays on the theme of Grumpy Cat’s general displeasure, but using the word “worst” in the title feels like a self-fulfilling prophecy.

In this strange film, Grumpy Cat (voiced by Aubrey Plaza) is living in a pet shop and finally gets chosen by a 12-year-old girl. The cat’s unmoving grumpy expression starts to feel worrisome as she goes through a series of adventures and costume changes that makes one wonder if indeed any cats were harmed in the making of this special.

Is the cat tired from having to do all this publicity? Is she really patient and happy with it? Does she care? This special truly serves to illustrate just how weird it was to cash in on the Internet sensation Grumpy Cat.[10] 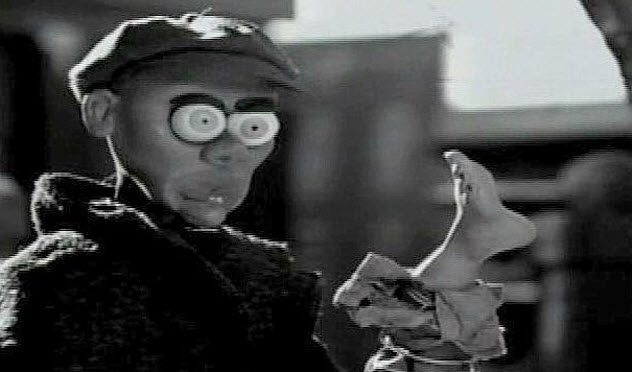 Leave it to William S. Burroughs to pen the darkest Christmas special. The grayscale Claymation makes for a landscape that is both gorgeous and disturbing in this story about a poor man named Danny who is withdrawing from opiates. He is released from a holding cell and hoping to score heroin. If you think this junkie is going to have a miraculous change of heart, you’re being naive.

There are a number of grim twists and turns, including when he breaks into a car to find a suitcase that holds two severed legs. He does eventually obtain a high from doing a good deed (giving the morphine he scored from a doctor by faking facial neuralgia to a young man suffering from kidney stones).[11] Merry Christmas indeed. 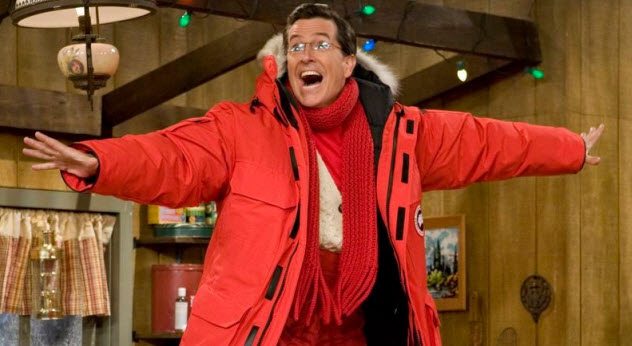 Stephen Colbert was a satirical madman during his reign as the host of The Colbert Report, so this Christmas show is full of political jokes and absolute lunacy. It is not the heartwarming Christmas comedy that the public may have wanted. Instead, it is a comedy nerd’s delight that feels like a live-action cartoon starring Colbert as the arrogant, partisan, fake reporter who is hell-bent on pointing out what is wrong with modern Christmas.

This show expertly parodied typical specials while staying true to Colbert’s beloved character. In classic style, A Colbert Christmas: The Greatest Gift Of All! boasted a slew of guests—from Elvis Costello to Toby Keith—in a special that remains as hilarious as it is unorthodox.[12]

Stephanie Weber is a writer and comedian from Chicago whose work has appeared on The AV Club, Slate, Atlas Obscura, Mental Floss, Reductress, The Whiskey Journal, and Listverse, to name a few.