We have recently presented two lists of fascinating factlets (a word I am still not entirely convinced is real) but, in light of the popularity of both bizarre lists and fact lists, we have put together this special list of factlets which are from the dark and weird recesses of history and society in general. Be sure to mention your own favorites in the comments. 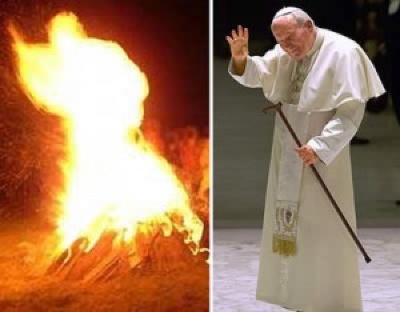 1. Pareidolia (pictured above) is the psychological phenomenon in which people see shapes or hear sounds which they consider to be significant when they are not (and in some cases, don’t exist at all). The most common example of this is the alleged hearing of phrases when playing records backwards. This is also frequently the cause of so-called miracles in which religious figures appear in toast, or clouds, or stains on every day objects.

2. Gleeking is the odd term used to describe the ejection of saliva from beneath the tongue either accidentally (when yawning, for example) or intentionally (the intentional forcing of saliva from the glands requires much practice). According to Wikipedia, gleeking can be induced by pressing the underside of the tongue against the palate, then pushing the tongue forward while simultaneously closing the lower jaw and moving it slightly forward. Despite practice I seem to fail at this – if anyone manages it let us know.

3. The Hawaiian language requires only twelve letters (and the apostrophe symbol which refers to the glottal stop in words like Hawai’i – this is called the ‘okina.)

4. Believe it or not, it is possible to accidentally plagiarize something. Cryptomnesia is a memory bias in which a person believes they have conceived of a new idea when in fact they are simply remembering someone else’s idea. Sometimes this even finds its way into literature: “Friedrich Nietzsche’s book Thus Spoke Zarathustra includes an almost word for word account of an incident also included in a book published about 1835, half a century before Nietzsche wrote. This is neither considered to be purposeful plagiarism nor pure coincidence. Nietzsche’s sister confirmed that he had indeed read the original account when he was 11 years old.”

5. Clinical lycanthropy is the very rare psychological disorder in which a person believes they have been transformed into an animal. This can result in the person experiencing hallucinations and mimicking the actions of the animal they think they have become. 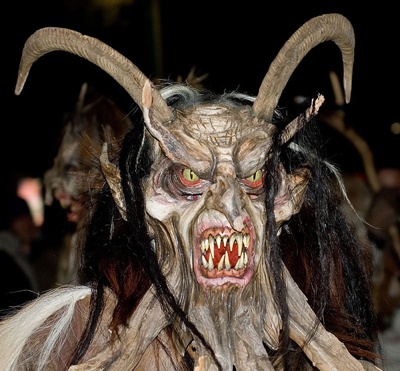 6. Did you know that santa has a special friend that travels with him? His name is krampus and he beats people with sticks – especially females. He is pictured above. The story of the krampus has been used for centuries to frighten children into behaving before Christmas.

7. A surprisingly large number of people believe in the Ancient Astronaut theory in which aliens are said to have come to earth in pre-history and given man knowledge (or, in some cases, to have bred with man to give us intelligence). Some proponents of the theory believe that all major religions on earth were started by these visiting space-creatures.

8. Mary Toft was an English woman from Godalming, Surrey, who in 1726 became the subject of considerable controversy when she tricked doctors into believing that she had given birth to rabbits. According to contemporary reports, “[Male midwife John Howard] delivered “three legs of a Cat of a Tabby Colour, and one leg of a Rabbet: the guts were as a Cat’s and in them were three pieces of the Back-Bone of an Eel … The cat’s feet supposed were formed in her imagination from a cat she was fond of that slept on the bed at night.” Later Toft seemingly became ill again, and during the next few days delivered more pieces of rabbit.” Her deception was eventually uncovered and both she and the medical profession were ridiculed.

9. Hyperthymesia is a condition (known to exist in only four humans so far) in which a person retains an almost perfect memory of everything they have experienced. A hyperthymestic person can be asked a date, and describe the events that occurred that day, what the weather was like, and many seemingly trivial details that most people would not be able to recall.

10. Intrusive R and Linking R are pronunciations of the letter ‘r’ in English dialects that don’t generally pronounce a final ‘R’ (such as New Zealand English). For example, in these dialects, when saying “don’t go far” – the word “far” has a silent ‘r’ – but the ‘r’ is pronounced in the sentence “he is far away”. This linking ‘r’ smooths out the phrase. Intrusive ‘r’ is when an ‘r’ is added where one doesn’t exist at all – as in the case of “Africa or England” – this would be pronounced “Africar-or-England”. 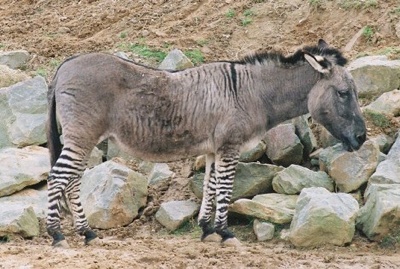 11. Zebroids are hybrid animals involving a zebra and either a donkey or a horse. Zebroids physically resemble their non-zebra parent, but are striped like a zebra. The stripes generally do not cover the whole body, and might be confined to the legs or spread onto parts of the body or neck. Depending on the hybrid, they take different names such as zorse, zonkey, zebrass, zedonk (pictured above), etc.

12. Crikey steveirwini (an air-breathing land snail) is the only species in the genus Crikey. The specific name steveirwini is in memory of wildlife expert Steve Irwin. The genus name is a favorite exclamation of Steve Irwin’s, “crikey!” being an Australian minced oath.

13. Shing? village (Japan) claims to be the last resting-place of Jesus, buried in the “Tomb of Jesus.” According to the local lore, Jesus traveled to Japan at the age of 21, where he studied theology for 12 years, after which he returned to Judea at the age of 34. He did not die on the cross at Golgotha. Instead his brother, Isukiri, took his place on the cross, while Jesus fled across Siberia, Alaska, and finally to Mutsu Province, in northern Japan, where he became a rice farmer, married, and raised a family near what is now Shing ?.

14. The Swedish Empire (which included Finland at the time) planned to change from the Julian calendar to the Gregorian calendar beginning in 1700 by omitting leap days for the next 40 years. Although the leap day was omitted in February 1700, the Great Northern War began later that year, diverting the attention of the Swedes from their calendar so they did not omit leap days on the next two occasions, causing 1704 and 1708 to remain leap years. To avoid confusion and further mistakes, the Julian calendar was restored when, in 1712, one extra leap day was added, thus giving that year a 30th of February.