Even though almost all of us have played with LEGO sets while growing up, not everyone is that good at it. For good reason, too, as building anything more complicated than rudimentary replicas of our favorite cars and tiny houses with just those blocks is not easy.

That is, of course, if you exclude the rare kid in school who could build almost anything with LEGO pieces. Fortunately for humanity’s unending pursuit of creativity, some of those kids grow up and go on to build even crazier LEGO structures than they did in school. The most surprising thing about these ten ridiculously elaborate LEGO structures isn’t that they’re complex (humanity has built some pretty complicated things in the past, as we all know) but that they were made with what’s commonly seen as just a kid’s toy.

Building a robot as well as quickly solving a Rubik’s Cube take some amount of skill to get good at. You need to have experience building machine circuits and a working knowledge of coding for the former and skills like memorization, spatial reasoning, and patience for the latter. If we were to ask you to build a robot that can solve a Rubik’s Cube, that’s already well into the “impossible” territory for most people.

That’s why this robot which can do exactly that, with the addition of being built with LEGO pieces, is so impressive. Made with a Raspberry Pi (which can be explained as a tiny computer you can program to do anything) and the LEGO Mindstorms EV3 set, the robot can solve a Rubik’s Cube under a minute and a half. A part of the code is also available online if anyone wants to build something similar to it.[1]

The Mona Lisa is considered to be one of the best artworks ever made, and deservedly so. The range of emotions portrayed in that one painting is mind-blowing, which is why it’s still studied by art students around the world.

What art students around the world don’t know, though, is that it’s entirely possible to remake the Mona Lisa with just LEGO bricks, too, as proven by this master LEGO builder (yes, that’s a real job) from the LEGOLAND Discovery Center in Chicago. He says that it’s a pretty simple thing to do, though coming from someone who literally gets paid to build things with LEGO blocks, his idea of “simple” may not be the same as the rest of us.

While there have been other attempts to recreate the famous painting using only LEGO pieces, none of them come close to the level of detail in this one.

If you’ve ever spoken to anyone who makes musical instruments for a living, you’d know that it’s an incredibly skilled profession. We’re not just talking about bespoke handpans or huge piano sets, either; making something as seemingly simple as an acoustic guitar by hand takes days, even months at times if it’s an especially skilled guitar maker.

Now imagine making a musical instrument just like that, except with LEGO pieces. People have built instruments like electric guitars, cellos, harpsichords, and ukuleles just with LEGO bricks, and they surprisingly work as intended.[3]

Of course, we’re not suggesting buying them for your next upgrade if you’re a professional musician, though they still work as great examples of what all you can do with LEGO blocks and enough imagination and time on your hands. 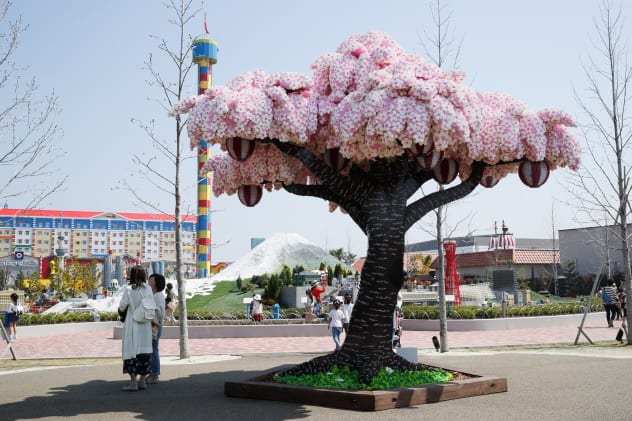 The time of cherry blossoms in Japan is something everyone has to see to know what the hype really is about. For a few months every year, the country is covered in the blooming colors of cherry trees, which is also peak traveling season for Japan.

In 2018, in order to commemorate the season, LEGOLAND in Japan created a full-scale cherry blossom tree with LEGO bricks, and it looks kind of cool. Apart from the 6,700 hours of work and 800,000 LEGO pieces that it took to make, it was also recognized by Guinness World Records as the largest LEGO brick cherry blossom tree.[4]

Now, we haven’t heard about any other competing attempts at that record, so we’re not sure how much weight that actually carries, but it’s still an impressive structure to look at. 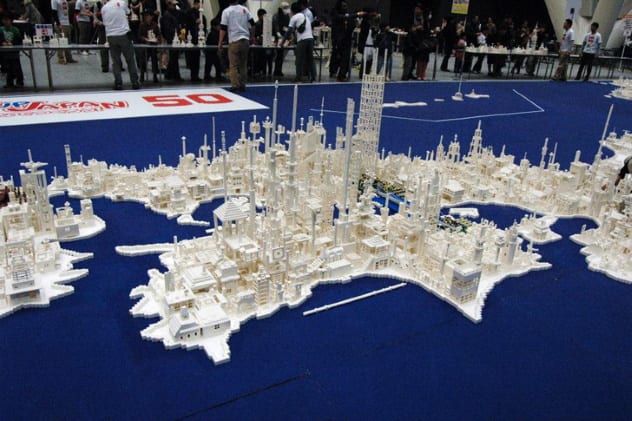 It doesn’t matter how good you are at building things with LEGO pieces, you still can’t beat Japanese kids at it. While there have been reports of impressive LEGO structures from Japanese schools before, the best one is by far this futuristic map of Japan.

Built in 2012 as a part of a project called Build Up Japan in the wake of the previous year’s earthquake and tsunami, the map was made with the help of 5,000 kids using over 1.8 million LEGO bricks.[5] It was built in six different locations across the country, and the parts were then transported to a convention center in Tokyo and put together for display.

The map represents a futuristic vision for Japan, even if Japanese cityscapes already look quite futuristic to the rest of us. 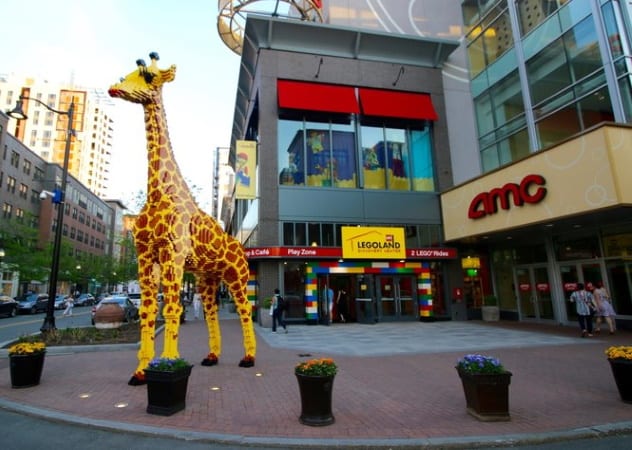 If someone were to ask you to build a life-size replica of any animal, you’d be hard pressed to figure out where to start. Do you use cardboard or foam? Will a live sample of the said animal be provided for reference? Are you generally good at art? These are the questions we might ask ourselves before deeming it impossible and giving it up.

For the master builders at the LEGOLAND Center in Boston, though, it’s not just an easy task, but it can be done with just LEGO pieces, too. Take the life-size giraffe structure outside. While there’s little chance that you’d mistake it for a real giraffe, it’s still a pretty majestic-looking thing.

In 2017, it was renamed Gio in the honor of a six-year-old of the same name who unfortunately died from a congenital heart disease.[6] 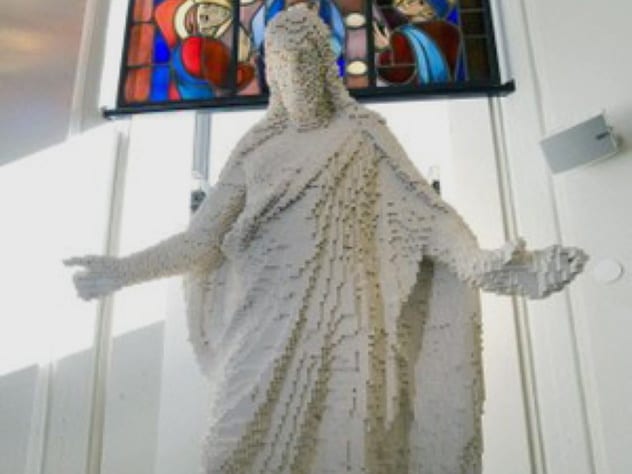 Religion has always been one of the biggest driving forces behind human creativity. From exquisite art in the Vatican to classical musical traditions in India, we owe a big portion of our artistic heritage to good old faith. That, of course, includes this LEGO replica of Jesus unveiled in 2009 in Oensta Gryta Church in Vaesteras, Sweden.[7]

While admittedly not as impressive as other religious works of art from history, it’s still one of the best things we’ve made using LEGO blocks. Built with around 30,000 LEGO bricks donated by the church’s members, the replica was modeled after a Danish sculptor’s work called Christus. It’s around 173 centimeters (5’8″) in height, though as there are a lot of conflicting accounts on whether that was Jesus’s actual height, we’re not entirely sure if it could be verifiably termed “life-size.” Still, it’s as big as an average person for sure. 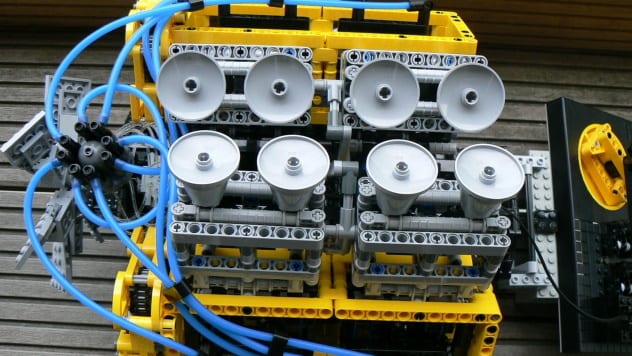 By now, you’ve probably realized that if you have the mind for it, you can build pretty much anything under the Sun with LEGO pieces. Case in point: this working LEGO V8 engine.

While it’s similar to other engines made with LEGO bricks, one key difference is that it actually works like an engine. It’s a 32-valve V8 engine, and even if it’ll take a lot more work to be used in a real car, it can still be put to other uses. It was made with 2,862 parts, complete with an electric motor to power it and a speed regulator for throttle control.[8] 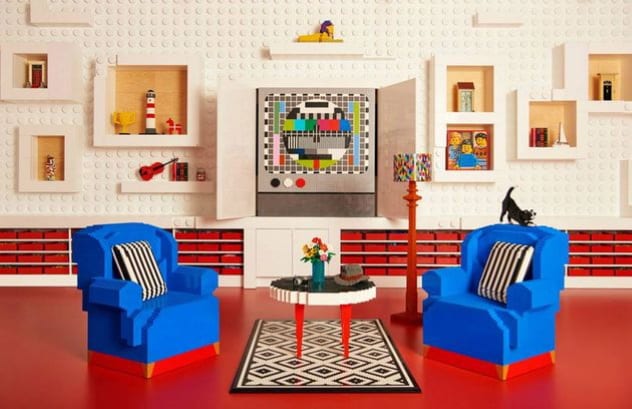 Ever since humans started living in settled societies, we’ve used all kinds of things to build our dwellings. From houseboats to tree houses to trailers, some people get really creative with their building materials. None of them, however, come close to the ingenuity of this house made with LEGO bricks.[9]

Located in Billund, Denmark, this isn’t just a replica of a house that most of us can make with a basic LEGO set. It’s as big as a real house, and all of the furniture and upholstery are also built with LEGO pieces. It was made with a whopping 25 million LEGO bricks and spans roughly 3,700 square meters (40,000 ft2).

Even if most of us will never be able to own a normal house of those dimensions, let alone one built out of LEGO blocks, it’s still nice to know that it exists.

If we were to tell you that it’s entirely possible to make a car just with LEGO pieces, you’d probably say, “Big deal,” as almost all of us have done that at some point (even if the complexity of that replica depends on our individual LEGO skills). However, we’re not just talking about a toy-sized LEGO car but an actual, full-scale supercar that can also be driven like a real vehicle.

In an extraordinary feat of creativity and craftsmanship, builders at LEGO built a full-scale replica of a Bugatti Chiron using LEGO’s Technic line of bricks. Of course, they had to call in actual car-making experts to complete it, as even master builders working with LEGO pieces aren’t capable of something that complex. A team of 16 specialists worked for over 13,000 hours to build it, including specialized design, mechanical, and electrical experts. It was even test-driven by Bugatti’s official test driver and ex Le Mans winner Andy Wallace, proving that it actually works like a real car.[10]