[WARNING: content will be disturbing to most.] Most of us (thankfully) never have had to experience any of these parasites. Though there are people who are at risk everyday and haguive to go through these horrid symptoms and even risk death if infected, or more so, infested. 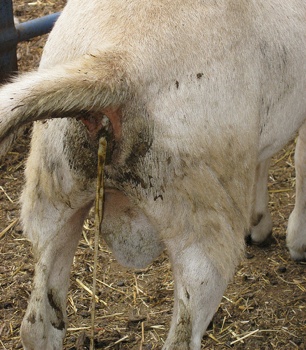 Taeniasis is a tapeworm infection. Tapeworm infestation does not usually cause any symptoms. Infection is generally recognized when the infected person passes segments of proglottids in the stool, especially if the segment is moving. Mmm sounds like fun! Not. People acquire tapeworms by eating undercooked meat or freshwater fish that contain tapeworm cysts. Tapeworms in the intestine usually cause no symptoms but may cause abdominal discomfort, diarrhea, and loss of appetite. Though however if they are in the brain, larval cysts cause various symptoms, such as headaches, seizures, and confusion. [JFrater: Given the choice of a picture of the worm itself, and the picture above, it was a no-brainer.]

Only one bot fly species attacks humans, the Dermatobia hominis. Eggs are deposited in animal skin directly, or the larvae drop from the egg: the body heat of the animal induces hatching upon contact. Infestation can be caused by larvae burrowing into the skin of the host animal. They do not kill the host animal, and thus are true parasites (though some species of rodent-infesting botflies do consume the host’s testes/ovaries). You can cause them to suffocate by placing smoke over your wound or tape where they then try to come to the surface and you can then extract these pests. The disgusting video clip above shows an extraction from a human head. 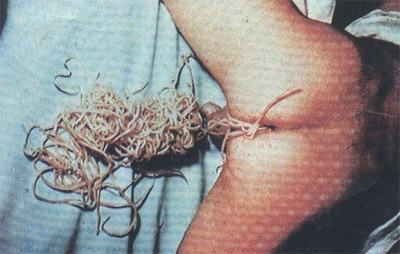 Ascariasis is the most common human worm infection. Infection occurs worldwide and is most common in tropical and subtropical areas where sanitation and hygiene are poor. Children are infected more often than adults. In the United States, infection is rare, but most common in rural areas of the southeast. Anesthesia appears to agitate the worms and when there is infection of adults in the lungs they can exit the mouth and nose. The normal life cycle of ascaris is to migrate to the lungs for the larval stage and grow to an adult in the intestines, but sometimes the adults reside in the lungs. Ascaris eggs are found in human feces. After feces contaminates the soil, the eggs become infectious after a few weeks. Infection occurs when a person accidentally ingests infectious Ascaris eggs. Once in the stomach, immature worms hatch from the eggs. The larvae are carried through the lungs and then to the throat where they are swallowed. Once swallowed, they reach the intestines and develop into adult worms. Adult female worms lay eggs that are then passed in feces; this cycle takes between 2-3 months. I couldn’t imagine that something like that wriggling out of me! If you don’t believe they can come out of the nose and mouth, take a look at this picture [warning: don’t – it is revolting]. 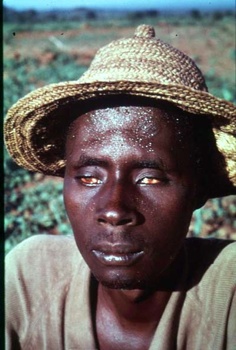 Also known as river blindness, this is the world’s second leading infectious cause of blindness. It is caused by Onchocerca volvulus, a nematode that can live for up to fifteen years in the human body. It is transmitted to humans through the bite of a black fly. The worms spread throughout the body, and when they die, they cause intense itching and a strong immune system response that can destroy nearby tissue, such as the eye which causes the blindness. 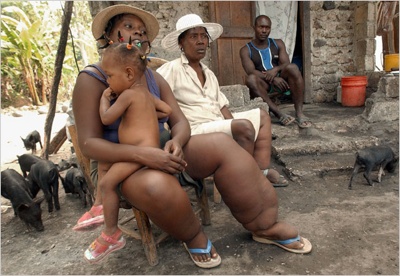 A parasitic and infectious tropical disease that is caused by thread-like filarial nematode worms. These worms occupy the lymphatic system, including the lymph nodes, and in chronic cases these worms lead to the disease Elephantiasis – as seen above.

First swallowed by a water flea, the Guinea worm transforms into a third stage larvae. The flea, ingested by a human being, is consumed by the stomach’s juices and the larvae of the Guinea Worm are released. They remain in the stomach for up to three months. After mating, the male dies and the female bores through the body making her way to the extremities, usually the lower leg or foot, but she can go to any part of the body. Once settled, just under the skin, she begins to grow, by eating the flesh of her carrier, and turns into a three to five foot worm. This worm is about as big around as a piece of spaghetti. While growing, she causes severe pain and cripples the carrier, so that they are not able to move. As the worm matures, a painful blister appears on the skin of the carrier. When the person puts the affected part of the body in water, the blister breaks and hundreds of thousands of tiny first stage larvae are released into the water. The adult female worm then comes slowly out of the body of its carrier through the sore made by the broken blister. It usually takes several weeks for the worm to completely exit the body. 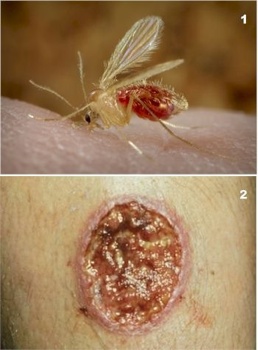 A skin infection caused by a single celled parasite that is transmitted by sand fly bites. The sandfly vector is a 2-mm long, hairy fly. These flies are able to pass through the usual netting used for mosquitoes. Sand flies are found around human habitations and breed in specific organic wastes such as feces, manure, rodent burrows, and leaf litter. Cutaneous leishmaniasis manifests as painful sores that could, if infected, lead to death. 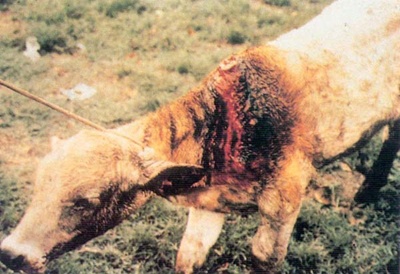 An insect parasite of warm-blooded animals. The fly has red eyes and a shiny blue-green body and looks similar to Australian blowflies. Flies lay eggs on the edge of open wounds from scratches, injury, branding, dehorning or castration. Larvae hatch and feed on the underlying flesh causing extensive tissue damage. Left untreated, animals can die from infection and loss of tissue fluid. Its known for the larvae to eat their host from the inside out! 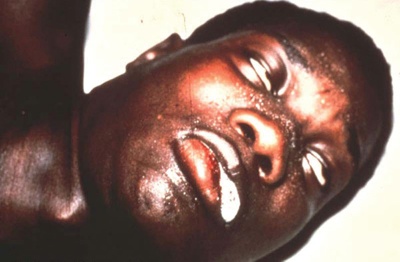 A vector-borne parasitic disease, this disease is transmitted through the bite of an infected tsetse fly. At first they multiply in subcutaneous tissues, blood and lymph. In time, the parasites cross the blood-brain barrier to infect the central nervous system. Tsetse flies are found in Sub-Saharan Africa. Only certain species transmit the disease. They are mainly found in vegetation by rivers and lakes, in gallery-forests and in vast stretches of wooded savannah. When symptoms do emerge, the patient is often already in an advanced disease stage when the central nervous system is affected. The first stage of the disease, known as a haemolymphatic phase, entails bouts of fever, headaches, joint pains and itching. The second stage, known as the neurological phase, begins when the parasite crosses the blood-brain barrier and invades the central nervous system. In general this is when the signs and symptoms of the disease appear: confusion, sensory disturbances and poor coordination. Disturbance of the sleep cycle, which gives the disease its name, is an important feature of the second stage of the disease. Without treatment, sleeping sickness is fatal. 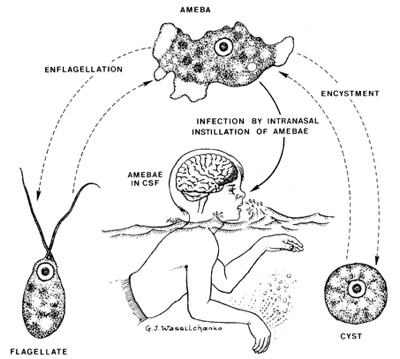 Don’t drink the water. And while you’re at it, you might not want to take any chances by putting your head in it, either. Naegleria fowleri, a not-so-friendly little amoeba, makes its home in warm fresh water in the American Southwest. That’s not such a problem, but it occasionally also likes to make its home in people’s brains, which is a bit of a problem. Infection with Naegleria causes the disease primary amebic meningoencephalitis (PAM), a brain inflammation, which leads to the destruction of brain tissue. Initial signs and symptoms of PAM start 1 to 14 days after infection. These symptoms include headache, fever, nausea, vomiting, and stiff neck. As the amoeba cause more extensive destruction of brain tissue this leads to confusion, lack of attention to people and surroundings, loss of balance, seizures, and hallucinations. After the onset of symptoms, the disease progresses rapidly and usually results in death within 3 to 7 days. 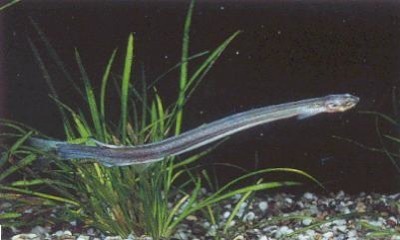 This is a bonus item courtesy of Top 10 Worst Things in Nature. The Candiru is a small parasitic catfish which is found mostly in the Amazon river where it is the most feared fish – even more so than piranhas. The fish can grow to a maximum length of around six inches. Candiru feed on the blood of their host creatures by swimming into the gills and using razor sharp spines on its head to attach itself. It then chews its way through the host until it reaches a major artery and drinks blood until it is satiated. The fish finds its prey by sniffing the water and this is where it starts to get nasty: the smell of human urine appeals to candirus and they can find their way to a human penis or vagina under the water and enter it. When this happens, the fish attaches itself (causing great pain to the poor human) and it can generally only be removed through surgery. This is a very unpleasant situation to be in – so be warned: don’t pee in the Amazon river.