Just when you thought your nightmares were over, Listverse brings you yet another ten gruesome torture devices, to make you cringe in your seat. These cruel instruments were commonly used throughout history to punish criminals, exert power over others and strike fear in the immoral and corrupt. Be sure to save that meal of yours for later; this is going to make your stomach churn. You can read the first list here. 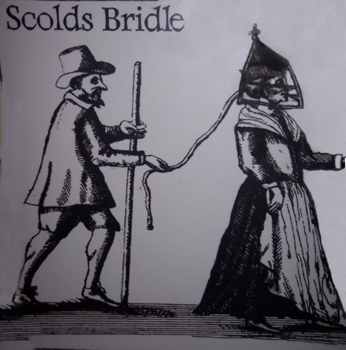 This portable instrument of torture was popular in England and Scotland during the 1500’s, but was seen as late as the nineteenth century. The scold’s bridle (also known as branks) was a cage that was locked around a woman’s head as punishment for nagging and gossiping too often. Attached to this iron muzzle was a curb-plate inserted into a woman’s mouth to, literally, subdue her treacherous tongue. Most of these metal curb-plates were spiked, averaging in length of about half an inch to an inch. The smaller spikes were a mild discomfort while the longer ones pierced the tongue and caused the victim to bleed continuously.

To make matters worse, some curb-plates had an additional round gag at the end which, when the device was worn, rested in the back of the mouth, irritating the throat. Some of these gags were shaped as animal heads to symbolically refer to her crime (e.g. donkey meant fool).

Wearing the scold’s bridle was far from a private affair. Women were taken through town, led by a leash, for people to see and know of her transgressions so that she may be ridiculed for them. If the verbal assaults weren’t enough, women were stoned and beaten by the townspeople. 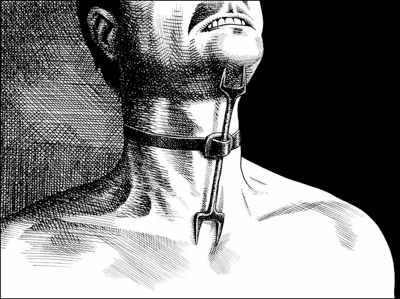 The heretic’s fork, as you may have guessed, was used primarily during the various inquisitions. The fork was a metal rod with two prongs at both ends attached to a leather strap worn around the neck. The top fork was placed on the fleshy part under the chin, while the other end dug into the bone of the sternum, keeping the neck stretched and the head erect at all times. Ensuring optimal agony was simple. A person wearing the heretic’s fork was kept from lying down by either being hung from the ceiling or suspended in some manner that proved distressing.

Those wearing the device were only able to murmur to their torturers; any movement of the jaw would force the sharp prongs to further penetrate their skin. It was effective for long use because neither end pierced a vital organ, and blood loss was minimal. Victims usually died of sleep deprivation and fatigue. 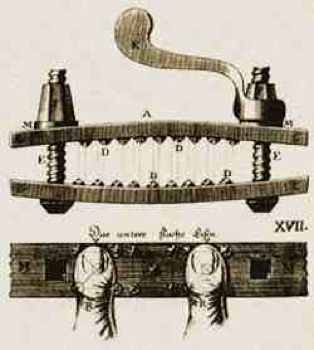 This device, though seemingly simple, is a work of genius (in a cruel and unusual way, of course). A prisoner would place his thumbs between two flat metal pieces, connected by one or more screws. The metal bars had ridges, either smooth bumps or sharp spikes, that would bore into a victim’s thumbs, trapping him into the metal mechanism as his bones were crushed. It was a small torturous device that inflicted extreme pain, without too much effort.

The thumbscrew isn’t as bloody or nightmarish as other items listed here, but think about an instant when your thumb was caught in the door or a drawer; magnify the pain and you might then understand just how horrifically dreadful thumbscrews really were. Similar inventions were used on toes, wrists, elbows and knees. 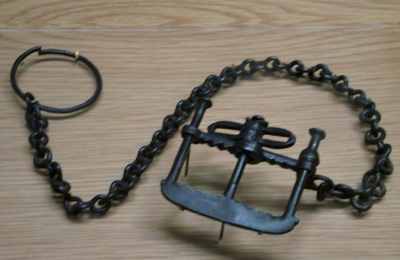 If crushing thumbs wasn’t enough, the Chinese tean zu, using a similar concept, was used on all fingers in a gruelingly long process. A victim’s fingers were placed on a flat wooden surface, where each finger was separated by sticks attached to strings. Refusal to answer questions or offer information resulted in the tightening of the strings which closed the device onto the prisoner’s fingers, breaking them slowly.

The tean zu was useful for a number of reasons. It was relatively easy to create, requiring little mechanical skill to assemble it. Crushing fingers not only delivered an extreme amount of pain, but the process could be repeated countless times. The unlucky victim strapped in the device would suffer for days, each time forcing their bones to crack again. These bones were damaged so badly, at times, that they protruded out of the skin from multiple crushings. 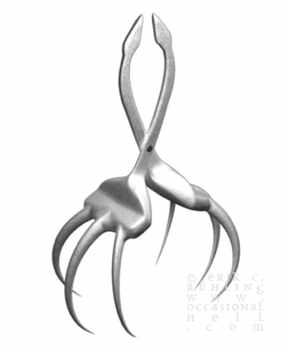 Remember the breast ripper? The Spanish spider is a variation of that device, except more excruciating (but with a subtler name). This object had long metal claws, which were heated before it was fixed onto a woman’s breast. If piercing soft flesh with a searing hot metal wasn’t enough, the breast was then ripped off a woman’s chest violently. This was the penalty for adultery or deliberate miscarriage of justice.

Other uses of the Spanish spider were just as inhumane. Victims were pierced by the heated claws on their breasts, belly or buttocks (anywhere fleshy) and then hung from the ceiling. Their own weight caused the wounds and skin to stretch, and bleeding was near impossible to stop. People died hours after they were first suspended off the ground. 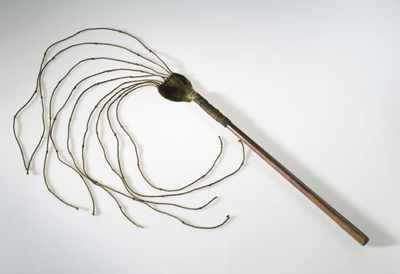 Out of all the items on this list, the whip is perhaps the most familiar to us. Its basic design was admired throughout history, used in ancient Rome and remaining prevalent even up to the American Civil War (to discipline slaves). Today, the whip is still used as punishment in Islamic countries and Eastern nations.

There are two main types of whips: the horsewhip, a flexible stick with a handle and the traditional whip, a long, single strand normally made of leather with a stiff handle at the end. Variations of these include the bullwhip (braided leather), cat o’ nine tails (multiple strands), knout, scourge and knittles. Some strands were tipped with metals and sharp objects to add further injury.

Additionally, the whip was the first man-made object that could break the sound barrier. Let me repeat that so it can sink it: whips break the sound barrier. Traveling over 760 mph (340 m/s), the crack of a whip is actually a small sonic boom. Remember these objects were, and in some places still are, used on people as punishment. Strikes were so severe that pieces of flesh were torn right off, and losing an eye in the process was common. Victims would lose so much blood it was normal to fall into a state of hypovolemic shock. 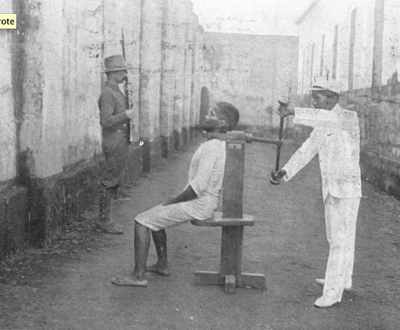 The victim was locked into a seat with his back against a flat surface or a metal rod. His neck was strapped with leather, string or a metal band, attached to a wheel or crank in the back. The wheel would turn so his neck was crushed agonizingly slowly, eventually suffocating him to death. Variations of the garrote included a spike or blade which would penetrate the spine as the wheel turned to break the neck quicker or severe the spinal column. The kill was quick and silent; both appealing traits when you’ve got a lot of people to torture.

The Spanish perfected the instrument, but it was popular in many cultures. It was last used in 1975 when a student was executed by use of the garrote, only to be later found innocent. 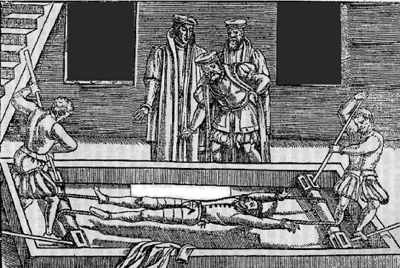 The rack is a wooden frame with a roller at each end. Prisoners were strapped onto the mock table to keep from squirming, as their wrists and ankles were tied to a roller. They then began to turn in opposite directions, stretching out the body slowly until their joints were dislocated. This was a method used to gather information or confessions. Many prisoners had to watch other men suffer through the rack to implement a psychological fear in them prior to their own torture.

When a man failed to speak, the rollers continued to turn, eventually forcing the arms to be yanked right out of their sockets. Variations of the rack had nails protruding from the wooden surface into the victim’s back so as his body was stretched, the wounds would pull on his skin and muscles for additional brutality. 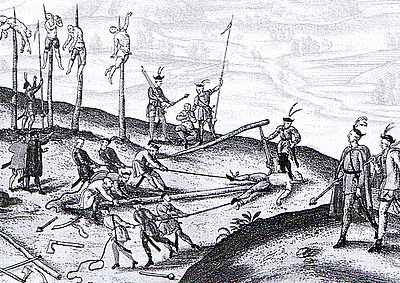 The basic definition of impaling is to drive a sharp object through the body. The impaling torture is much more graphic. Victims would be pierced with a long, splintered stake through their sides (either stomach or ribcage), anus or vagina. A “perfect” impalement would penetrate the entire body so that the sharp end come out of the mouth.

The cruelest torturers positioned the bodies of the victims in a way so that they wouldn’t die immediately. Multiple stakes were used to suspend the body and keep the weight balanced enough, keeping the person from sliding down. Any movement or struggling, though, forced the stakes further into their bodies, hastening their death. 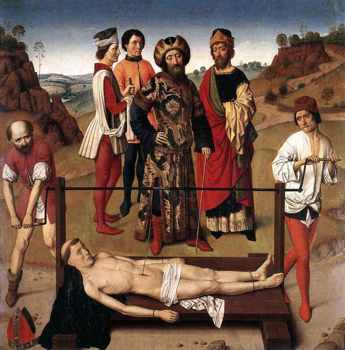 The (conscious) victim was tied to a table, where an incision was made to his abdomen wide enough for the torturer’s hand to fit inside. His small intestine was then separated from the bottom of the stomach with a hook and attached to a crank. Slowly, the crank would turn, pulling out the intestine from the gut inch by inch. The victim, and those witnessing the torture, would see anywhere between 9 to 18 feet (3 to 6 meters) collect around the shaft of the crank.

This device was used to gather information from criminals, though as soon as the process started, there was no point in stopping; no one survived the crank. People died from a combination of extreme pain and blood loss. 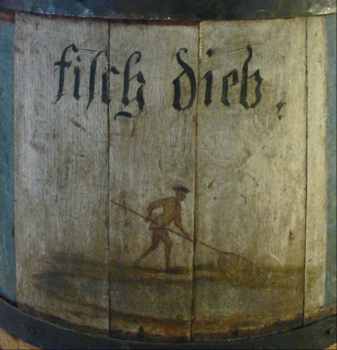 Known as the “barrel of shame,” the schandmantel was made of wood and worn in public, so that the person was insulted and stoned. It is said that the schandmantel may have inspired the invention of the iron maiden, which was never historically used as a form of torture.

10 Epic Ways To Slay A Dragon