One of the most successful films in the last year has been the superhero film Captain Marvel, staring Brie Larson. Captain Marvel, whose real name is Carol Danvers, is one of the latest to take the stage in the Marvel Universe. [Name] started out her career as an Air Force pilot before uncovering her true mission: saving the planet from an alien invasion.

Early in 2019, right around the release of the film in theaters on International Women’s Day, the United States Air Force, with their advertising agency of record GSD&M, ran an award-winning campaign highlighting this parallel by letting Captain Marvel/Carol Danvers be a face for female fighter pilots serving in the Air Force. A relationship between the military branch and filmmakers already existed, as they worked closer together to ensure that Carol Danvers accurately represented the female pilots that serve in the military.

All of this happened behind-the-scenes, however, so I felt inspired to take it a step further and introduce 10 women of the U.S. Military who actually could have been Captain Marvel. It’s interesting to think that something so out-of-this-world as the sci-fi world of Marvel could have such powerful ties to our own world. 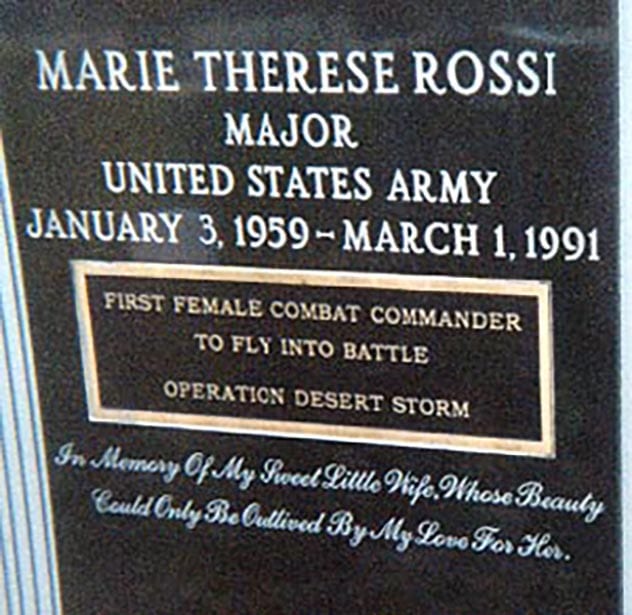 Number 10 on this list is Major Marie Rossi. She served as a pilot in the 101st Airborne Division of the United States Army. While she wasn’t in the Air Force necessarily, she was a hero of the skies. She served during Operation Desert Storm in the early nineties as a helicopter pilot. Her mission was to transport fuel and ammunition as support for a ground attack.

She made the ultimate sacrifice on March 1, 1991 when her helicopter crashed. Despite the tragedy, she left behind a legacy as being one of the first female soldiers to actively be a part of an air assault in enemy territory. She now rests in Arlington Cemetery, Virginia.

Though she may not have had supernatural abilities, she was as super as one can be, and her sacrifice and services are revered and remembered.[1] 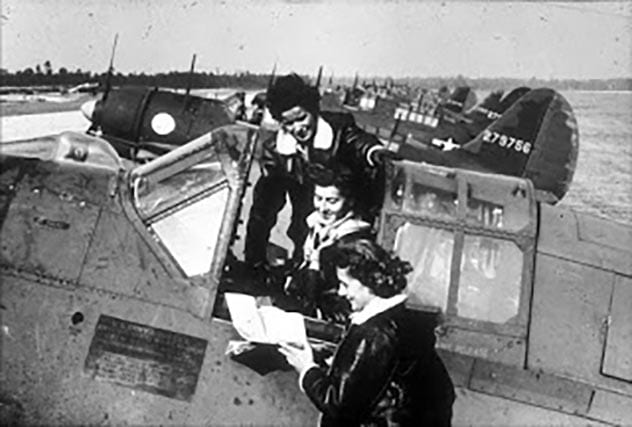 Lieutenant Colonel Dora Daugherty Strother earned a spot on this list for her successes during her time as a WASP: Woman Airforce Service Pilot. The WASPs were a group of female pilots serving during World War II—a time when women were not supposed to be in the Armed Forces at all, really, let alone flying these planes.

But that’s what Lt. Colonel Strother did—she was the first to fly the B-29 Superfortress, a massive, cutting-edge bomber that was designed to drop atomic bombs on the enemy. Men refused to fly it, saying it was too dangerous, but she didn’t let the aircraft (or the patriarchy) intimidate her. She went on to fly this beast, proving that it wasn’t dangerous and “even a woman could fly it.”. She spent a significant portion of her career training pilots after that.

She was a little before Captain Marvel’s time, but nevertheless, she was making waves.[2] 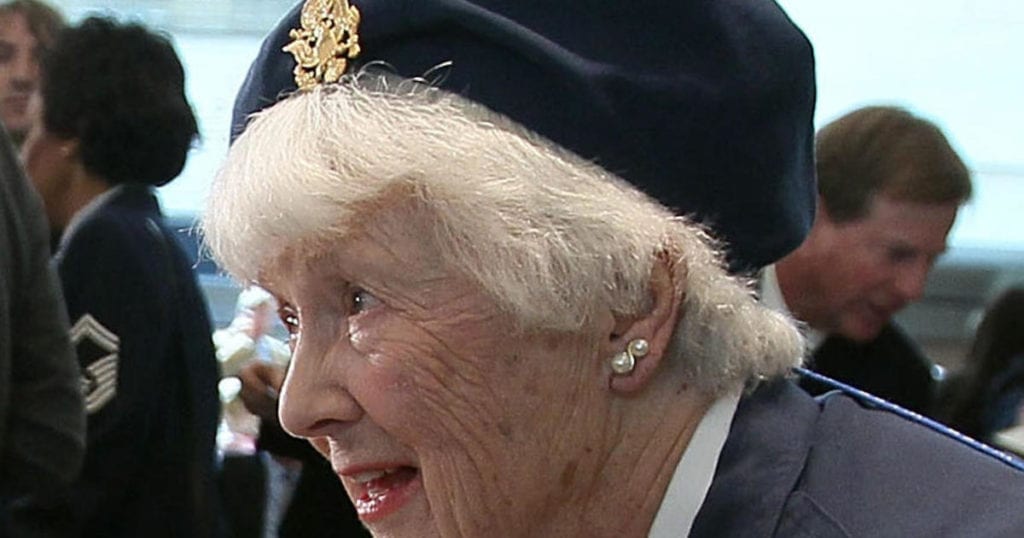 Elaine Harmon was also before Captain Marvel’s time and also a WASP. What’s remarkable about her is not so much her service during World War II—which is without question worth our respect—but more so what she did in death. She, or rather he family, made it possible for female World War II pilots to be buried in Arlington Cemetery, something they were denied for decades.

Harmon passed away in 2015 at the age of 95. As a veteran and pioneer for both women and for the advancement of the war effort, she deserved a place in Arlington Cemetery. It’s worth noting that this isn’t the only fight for recognition and honor the WASPs have had. It took thirty years to even be recognized as veterans, with that posthumously being declared in 1977.

Now they and their families were fighting again, and Elaine Harmon was the face of that change. In May of 2016, then-President Barack Obama allowed WASPs to be buried in Arlington Cemetery, and it was then that Elaine Harmon accomplished her final mission. Carol would probably be proud.[3] 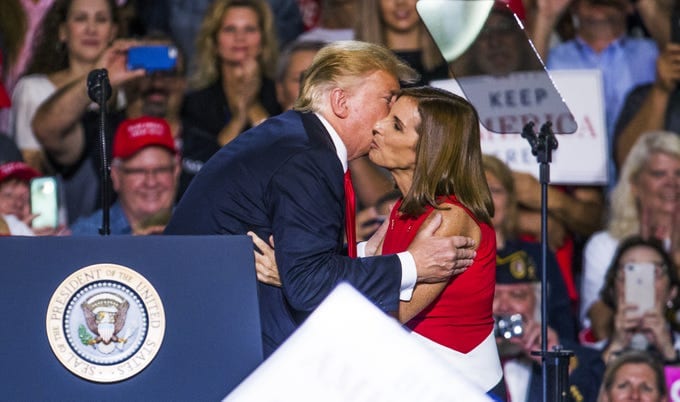 Martha McSally is a name all of us in the U.S. would probably do well to learn. She is currently serving as a Republican Senator in Congress representing Arizona, but before that, she served as a Colonel in the United States Air Force for 26 years, and definitely would have made a great Captain Marvel.

While military and Congressional service alone is remarkable, she did even more than that. Senator McSally holds a spot in history as the first female fighter pilot to fly in combat and to command a squadron in combat.

She paved the way for women during her military service, but her fight went beyond the battlefield in what she calls “the burka battle.” Its official name is actually McSally v. Rumsfeld. Donald Rumsfeld was the Secretary of Defense in the early 2000s when McSally filed a suit against him for the military’s policies regarding female servicemembers’ dress code and treatment in Saudi Arabia. They were required to dress head-to-toe, ride in the backseat, etc. and she argued that it “abandons our American values that we all raised our right hand to die for.” She ultimately got the policy changed.

Just like the fictional superhero, the very-real McSally is leading the fight on and off the battlefield, in the air and on Capitol Hill.[4] 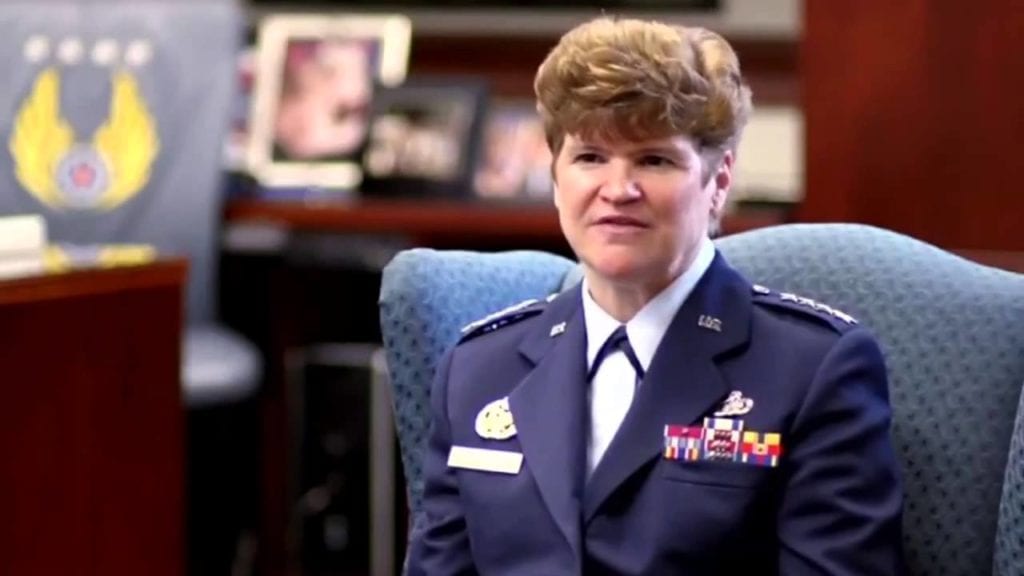 Talk about firsts. General Janet Wolfenbarger served in the United States Air Force for over thirty years before retiring in 2015. Before she left, though, she definitely left her mark.

Gen. Wolfenbarger was a member of the first United States Air Force Academy class to include women when she enrolled in 1976. After years of service, including as Command of Materiel, a very, for lack of a better word, badass position, she was promoted to Four-Star General—the first woman in history to do so.

I can’t help but think if Carol hadn’t gotten her crazy powers, her grit might have gotten her to this position.[5] 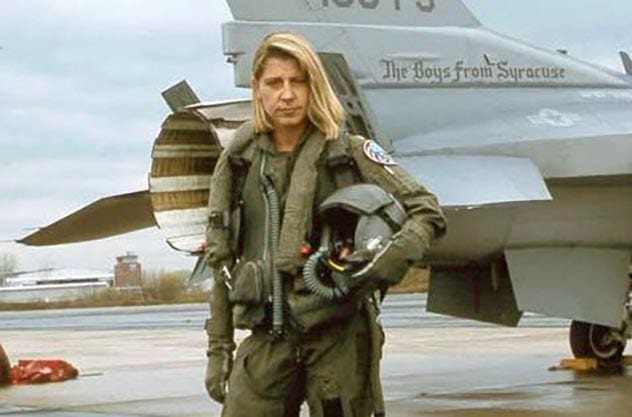 Major Jacquelyn S. “Jackie” Parker went down in history as the first female pilot to fly an F-16. She was a pilot during the 1980s, so women had been piloting aircraft for some time now, but what makes this so outstanding is that the aircraft in question is an F-16. Any unit beginning with the letter “F” is a fighter jet. All aircraft have these designations, so “B-52” is a bomber, the C-35 is a cargo jet, and the A-10 is an attack aircraft.

When Major Parker flew that fighter jet in 1988, she might not have been in combat, but she took a major step in the fight for female equality in the military. It’s because of her that just a handful of years later, some of the other women on this list—fighter pilots—got to man the cockpit themselves in battle.[6] 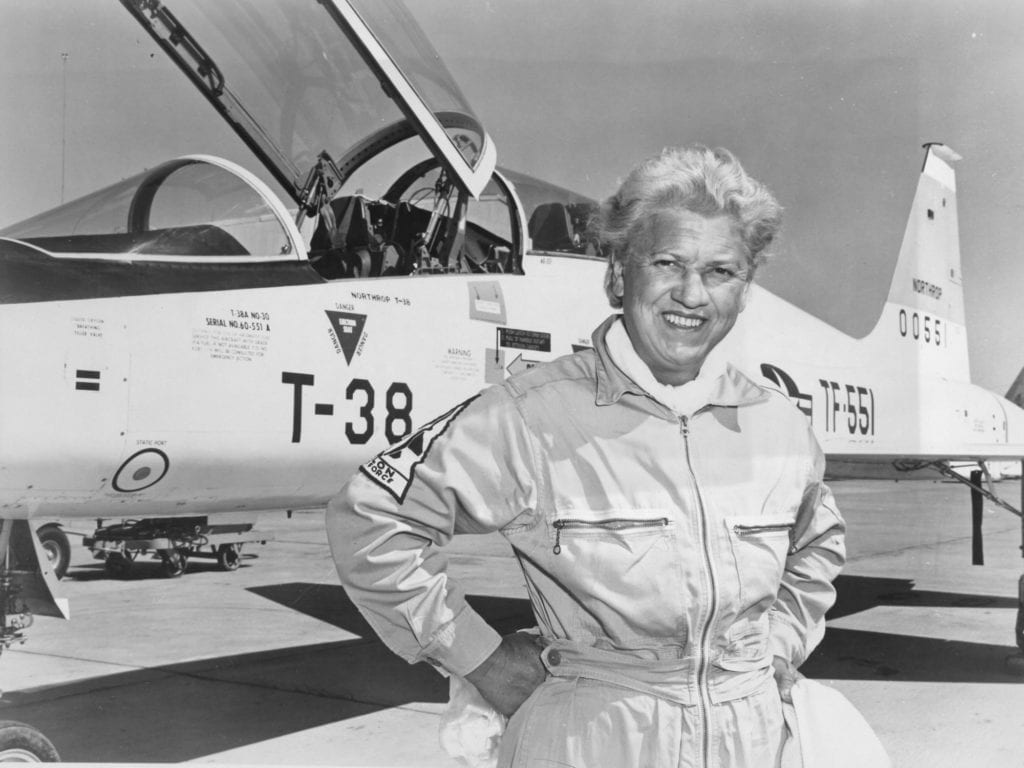 This woman is a record-breaker. As much as we all love to love the heroes on the silver screen, we can’t ignore the feats accomplished by Jacquelyn Cochran of the Women Air Force Service Pilots. This WASP earned her wings in 1932 and went on to break 73 records before she passed in 1980.

Her most remarkable feats include, but are certainly not limited to: being the first woman to break the sound barrier in 1953, breaking Mach 2 (twice the speed of sound) in 1964, being the first female to fly a bomber across the Atlantic Ocean, and as a consequence of that latter feat, helped found the WASPs in the first place. 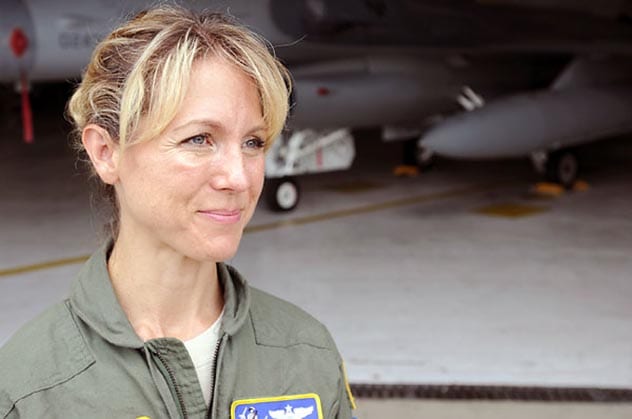 Lieutenant Heather “Lucky” Penney is probably one of the greatest heroes on this list, if not in the United States. Her story comes from September 11, 2001. She was stationed at Andrews Air Force Base where she served as a fighter pilot in the Air National Guard. Women had only recently been granted the right to train for and join Combat Aviation, and she jumped at the chance.

During a typical morning briefing, the attack on the World Trade Center happened, and she was called to duty. They had no time to prepare their F-16s, so they embarked unarmed. The plan was essentially to locate Flight 93—whose target is assumed to have been the White House, the Capitol, or maybe a second hit on the Pentagon—and ram into it, bringing it down. It was nothing less than a suicide mission, and Lt. Penney didn’t let it stop her.

Whether fortunately or unfortunately, Penney and her team didn’t have to fulfill the mission, as the plane crashed in Pennsylvania, thanks to the unbelievable heroism of passengers on that Boeing 747.

Regardless of the tie to some blockbuster, or even a lack thereof, her story needs to be told and remembered. Every story from that day should not be forgotten. [8] 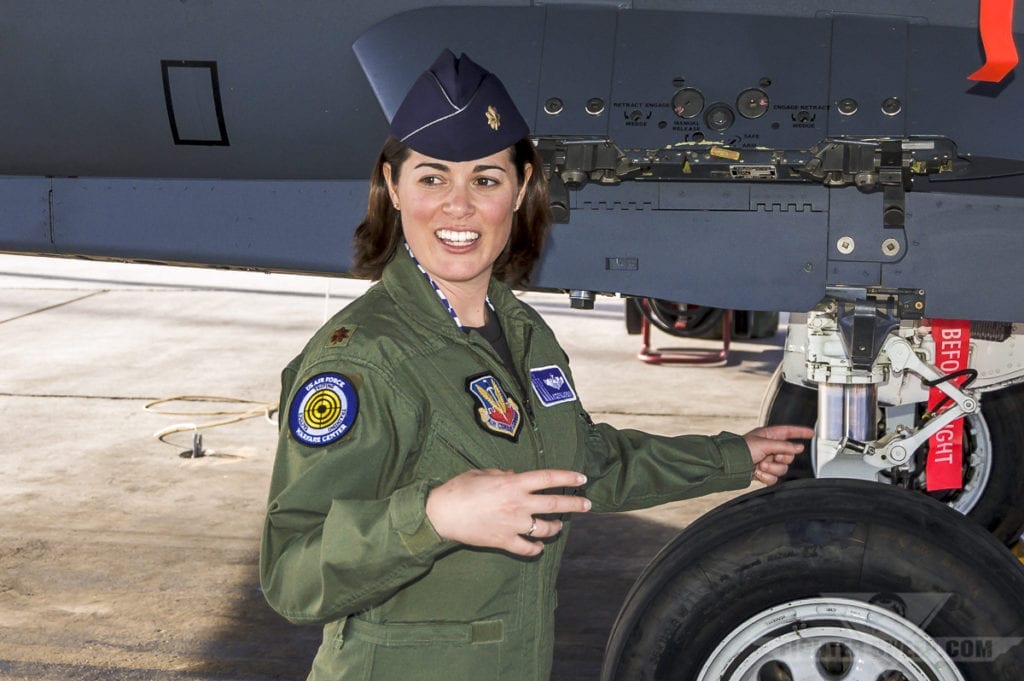 Kind of like actress Brie Larson, Nicole Malachowski is a performer, but she didn’t perform on a Hollywood set. She performed in the air as the nation’s first female Thunderbird. The Thunderbirds are the Air Force’s team of pilots who put the branch’s remarkable, groundbreaking aviation technology on display through air shows across the country. For decades, women merely worked behind the scenes as mechanics, until fighter pilot and United States Air Force Academy graduate Nicole Malachowski came to the cockpit.

Her talent speaks for itself. She earned her pilots license before she earned her drivers license. She went to the Academy and earned a place as an instructor and flight commander, serving in three F-15E Strike Eagle fighter squadrons. 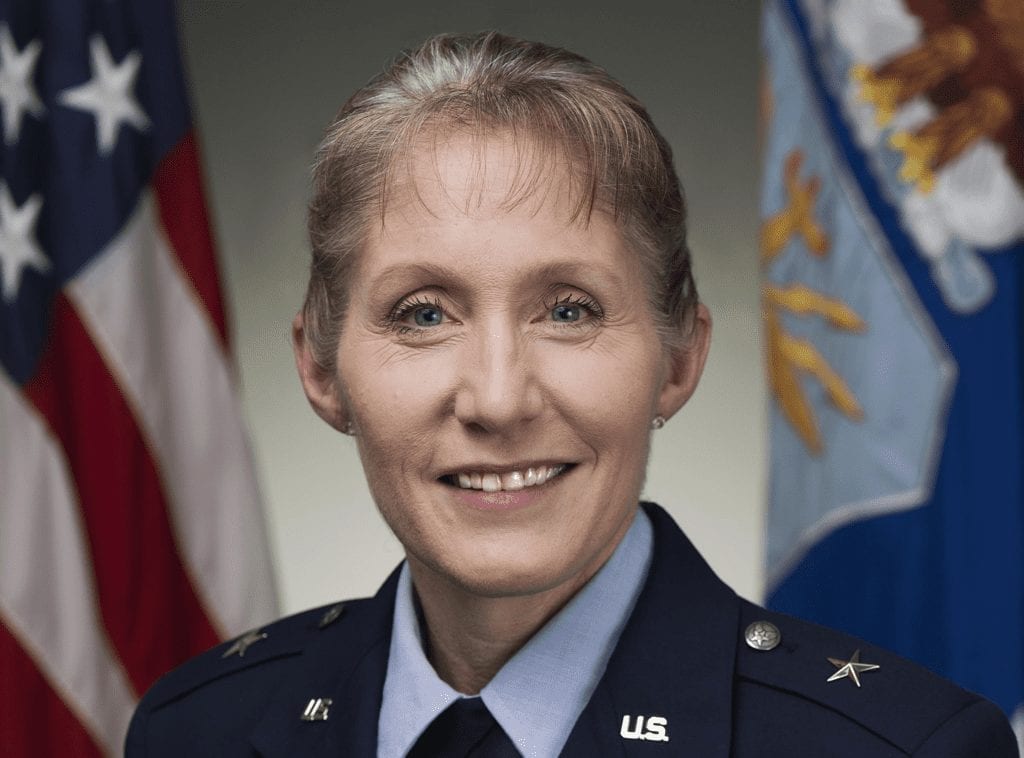 One of the most famous—if not the most famous pilot on this list—is Brigadier General Jeanne Leavitt. As the role model for Brie Larson as she prepared to play Captain Marvel, as well as the creators of the film, Jeanne Leavitt knows a little something about being an Air Force pilot.

In 1993, she became the first female fighter pilot. She had hundreds of flying hours, but in 1992 when she was given the choice of aircraft, she was denied any combat aircraft (bombers, fighters etc.). In 1993, the ban was lifted, and she was the first woman to jump in, flying an F-15.

She has now accumulated over 3,000 hours of flight time and serves as the commander of the Air Force Recruiting Services in San Antonio, TX.

For more lists just like this one, check out 10 Ways The Marvel Cinematic Universe Screwed Their Continuity, and 10 Reasons Why Thanos May Be The Scariest Marvel Villain