Here are ten of the most terrifying and bizarre creatures to ever, allegedly, have walked the Earth. These creatures defy logic, inspire the imagination and generate fear. They are the subject of numerous movies, documentaries, books and even songs. They have become ingrained in our culture. Do these creatures really exist? Did they ever exist? Or are these merely hoaxes, or the result of over-active imaginations? No matter what you believe, I think it is safe to say that the members of this list are the stuff of nightmares, and if encountered, even the most hardened individual would tremble with fear. So let’s open our minds to the incredible, and embark on a brief journey through a world teeming with cryptids. This is a follow up list to the Top 10 Bizarre Cryptids. This creature was sighted on three separate occasions in the town of Dover, Massachusetts, on April 21 and April 22, 1977. Due to its appearance, there’s speculation as to whether or not this creature was an alien, or the result of some sort of experiment – a human or alien hybrid, for example – while others suggest it came from another dimension. The Dover Demon’s features are as follows: a disproportionately large and watermelon-shaped head; glowing orange eyes; long, thin arms and legs with slender fingers. It was said to be hairless, with rough, flesh-toned skin described as a tan color with the texture of sandpaper. The Dover Demon reportedly lacked facial features – it had no nose, ears or mouth. Its height was 3 feet, and it made a bloodcurdling noise that sounded like a hawk’s screech combined with a snake’s hiss.

Catch the stories of all of these fascinating cryptids with Cryptozoology A To Z at Amazon.com! 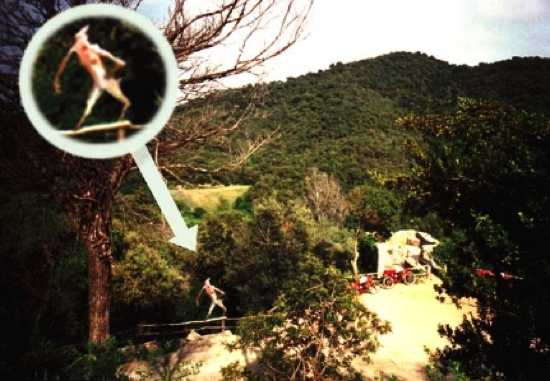 This beast is said to have inhabited the Pine Barrens of Southern New Jersey, with tales beginning in the 1800s and continuing until the 20th century. The creature is usually described as a flying biped with hooves, wings like a bat and a head resembling a horse. The legend of this creature stems from a tale about “Mother Leeds”, a local witch who invoked the devil while giving birth to her 13th child. When the baby was born it immediately transformed into a demonic creature and flew off into the surrounding pine barrens. The Jersey Devil was blamed for many livestock killings, strange footprints and bizarre sounds. In the early 1900’s, scores of people in New Jersey and neighboring states claimed to witness the Jersey Devil, or at least to see evidence of its continued presence in the form of anxiety-inducing footprints. It is claimed that the Flatwoods Monster is some form of extraterrestrial, as this creature was spotted in the vicinity of a large UFO that either hovered above or rested on the ground in the town of Flatwoods, in Braxton County, West Virginia, on September 12, 1952. According to the reports, this creature was huge, at least 10 feet tall. its face gave off a reddish glow, and its body was green in colour. Its head was shaped like a heart or Ace of Spades, and out of this strangely shaped head bulged non-human eyes. The body is described as being shaped similar to a man’s, and dressed in some sort of dark clothing resembling a skirt. Reports described the creature variously as having either no visible arms, or having short, stubby arms ending in long claw-like fingers. Mawnan, Cornwall – 1976. If you were in the area at this time, you would have overheard the first reports of a creature called the Owlman. The first sighting took place on April 17, 1976, when the creature was spotted hovering menacingly above the Mawnan church tower. Oddly enough, sightings up to August 1978 all occurred within the vicinity of this church. This cryptid, which, unsurprisngly, has the appearance of an owl, is about the size of a man; it has pointed ears, red eyes, and black pincer-like claws. Its body bears some similarities to the more famous Mothman: it is supposed to have had large wings of a greyish color. Somewhat eerily, there were many UFO reports, as well as accounts of animals behaving strangely in the surrounding area just prior to the Owlman sightings – yet another similarity to the Mothman case. The Lizard Man, being particularly terrifying, deserves a high place on this list. This humanoid cryptid is said to inhabit the swampland areas in and around Lee County, South Carolina. The sightings began on June 29, 1988, with the most recent notable sighting in February, 2008. The creature is described as being 7 feet 2 inches tall, bipedal, with a strong build, green scaly skin, and glowing red eyes. Reports state that the Lizard Man has three toes on each foot and three fingers on each hand. His fingers end in a circular pad that apparently enables him to scale walls and hang from ceilings. As evidenced by the damage done to the vehicles of those unfortunate enough to encounter it, the creature also possesses incredible strength – he is clearly capable of ripping into a car. Pulling over in this area is a bad idea. 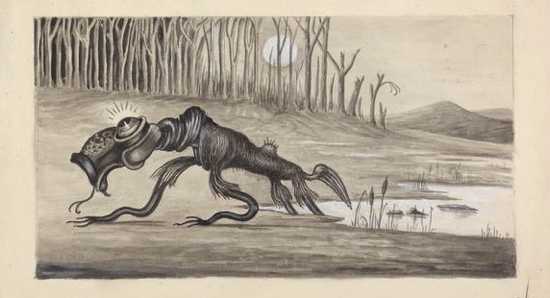 For those who grew up in Australia, the bunyip will be familiar. The bunyip is a large mythical creature from Australian Aboriginal mythology, said to lurk in swamps, billabongs, creeks, riverbeds and waterholes. It has been described as a giant starfish that walks on land – imagine that! Other 19th-century newspaper clippings describe it as having a dog-like face, dark fur, a horse-like tail, flippers, and walrus-like tusks or horns or a duck like bill. The very first description of this bizarre Australian cryptid appeared in a newspaper in 1845:

“The Bunyip, then, is represented as uniting the characteristics of a bird and of an alligator. It has a head resembling an emu, with a long bill, at the extremity of which is a transverse projection on each side, with serrated edges like the bone of the stingray. Its body and legs partake of the nature of the alligator. The hind legs are remarkably thick and strong, and the fore legs are much longer, but still of great strength. The extremities are furnished with long claws, but the blacks say its usual method of killing its prey is by hugging it to death. When in the water it swims like a frog, and when on shore it walks on its hind legs with its head erect, in which position it measures twelve or thirteen feet in height.”

If you love stories about cryptids, you won’t be able to stop reading Cryptid Hunters at Amazon.com! 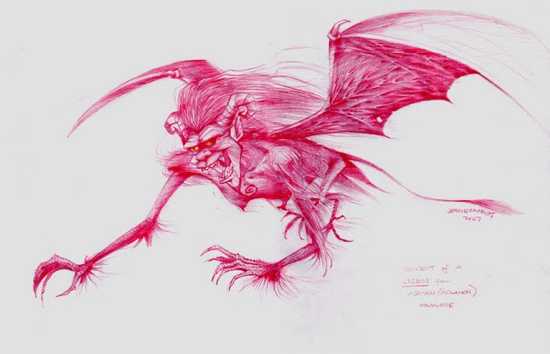 The Sigbin is a terrifying creature from the Philippines, said to lurk in the shadows at night, who sucks the blood of victims by consuming their shadows (the Philippines has some amazingly bizarre cryptids: for some real horrors see this list). The Sigbin is said to walk backwards, with its head lowered between its hind legs. It has the convenient advantage of invisibility – and especially humans are vulnerable to its powers of deception. It resembles a mere hornless goat, but has very large ears which it can clap like a pair of hands and a long, flexible tail which can be used as a whip – it’s unlikely that this goat ever encountered serious problems while crossing the bridge to the Other Side. The Sigbin is said to emit a nauseating odor. Sometimes, it has a tendency to crabwalk backwards, looking for children to devour. In 2005, scientists in Borneo discovered a “cat-fox-like carnivore” with hind legs longer than its forelegs, suggesting that it was endowed with the awkward gait and terrifying physical appearance of the Sigbin. Indeed, many of the characteristics are uncannily similar – but no conclusive evidence has yet been unearthed. The Sigbin, evidently, hides its tracks most effectively. ‘Canvey Island Monster’ is the name given to an unusual creature, whose carcass washed up on the shores of Canvey Island, England, in November 1954. A second, more intact carcass was discovered in August, 1955. The 1954 specimen was described as being 76cm (2.4ft) long with thick reddish brown skin, bulging eyes and gills. It lacked forelimbs, and its hind legs were described as having five-toed horseshoe-shaped feet with concave arches – apparently well-suited for bipedal locomotion. Its remains were cremated after a cursory inspection by zoologists who said that it posed no danger to the public. The 1955 specimen was described as being similar to the first – it was much larger, however, at 120cm (3.9 ft) long weighing approximately 11.3kg (25lb). It was sufficiently fresh for its eyes, nostrils and teeth to be studied, though no official explanation was given at the time as to what it was or what happened to the carcass. In most accounts, the Pope Lick Monster (named after the Pope Lick Creek below the Pope Lick Train Trestle – shown above) appears as a human-goat hybrid with the grotesquely deformed body of a man. It has powerful, fur-covered goat legs, an alabaster-skinned face with an aquiline nose and wide set eyes. Short, sharp horns protrude from the forehead, nestled in long greasy hair that matched the color of the fur on the legs. Numerous urban legends exist about the creature’s origins and the methods it employs to claim its victims. According to some accounts, the creature uses either hypnosis or voice mimicry to lure trespassers onto the trestle to meet their death before an oncoming train. Other stories claim the monster jumps down from the trestle onto the roofs of cars passing beneath it. Still more legends tell that it attacks its victims with a blood-stained axe. Described as a hybrid beast that bears a horrific mélange of both human and goat-like characteristics, this horned, hoofed, goat featured horror would seem to be a modern re-interpretation of the ancient satyrs found in Greek myths. Yet eyewitnesses claim that this fiend is not a figment from beyond mythology, but a living, breathing, flesh and blood creature, that is not to be trifled with. The first official report of this brute hails from 1957, when eyewitnesses reported seeing a hairy, horned monster in the areas of Forestville and Upper Marlboro in Prince George’s County. Following that wave of sightings, the beast apparently decided to lay low until the summer of 1962, when the Goatman was accused of killing no less than fourteen people — twelve children and two accompanying adults — who were apparently hiking too close to its lair. The survivors, who, of course, remain unidentified, claimed that the Goatman violently hacked its victims to pieces with an axe, all the while emitting ghastly sounds only the “devil himself” would make. [Source]