People know mosques to be the place of worship for followers of the Islamic faith, i.e. Muslims. There are thousands of mosques around the world. A lot of these structures are really famous for their architectural, historical, and aesthetic significance. With a special emphasis on vastness, this list makes it a point to pick out the most brilliant Muslim houses of prayer, the crème de la crème. 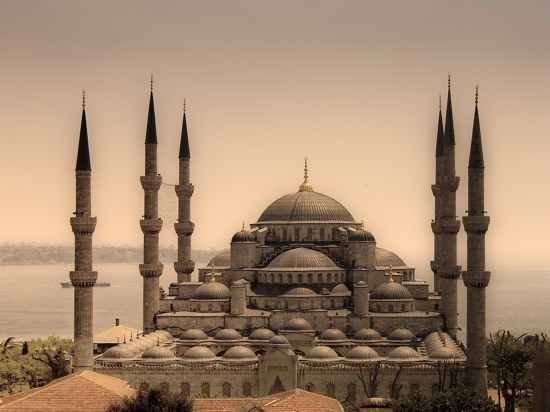 Our journey to find the most awe inducing mosques begins in Turkey. Istanbul is a fascinating city for so many reasons, serving as the capital of so many empires. It was during the Ottoman Empire, that Sultan Ahmet I decided to build an imperial mosque over the site of the bygone hippodrome which was the social center of Constantinople (Istanbul), the capital of the Byzantine Empire.

The Blue mosque is unique for having 6 minarets, only a few mosques can lay claim to having more. A series of smaller domes seem to cascade from the main dome going down each level and the complex has a huge courtyard almost as big as the mosque itself. Although at certain times in the evening the tops of the minarets and domes can seem to have a bluish hue, the mosque actually derives its name from the exquisite blue tiles its interior is adorned with. Like many other mosques of the world, the Blue Mosque contains the tomb of its patron. The incipiently named Sultan Ahmet I mosque has been a mainstay in Istanbul’s main square for a long time, and this majestic structure makes the historical site that much more special. 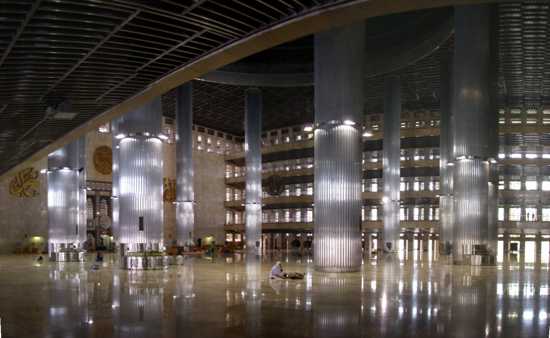 Indonesia has the largest Muslim population in the world, so if it’s any country that deserves a national mosque, it’s Indonesia. In 1978 this idea became a reality as the Istiqlal Mosque was inaugurated by President Suharto. Istiqlal means independence in Arabic and the mosque was named so as it served the purpose of celebrating and commemorating Indonesia’s independence from their colonial rulers.

The Istiqlal mosque is nothing like the traditional Javanese themed mosques found in Indonesia. This prayer house is a huge concrete block and resembles those old soviet styled public buildings. The main prayer hall is rectangular and has 12 huge columns standing at the center which supports the central dome of 45m diametric length. Piers support the balconies which make up each of the five levels of floors with the main prayer hall in the middle. There is another smaller edifice which acts as the entrance to the larger prayer hall but also is flanked by two wings of arcades which runs around the mosque’s courtyard, defining its shape. The steely minaret in the corner features a spire. The Istiqlal mosque is hugely appreciated in Jakarta, Indonesia; and it’s a truly a site to behold. 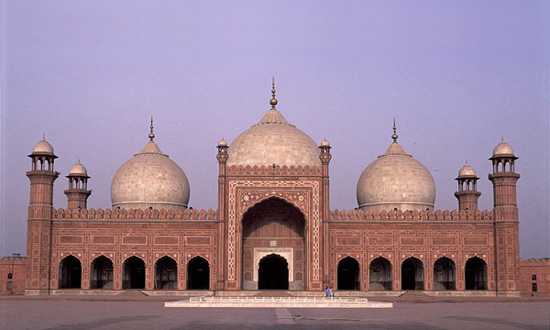 Aurangazeb was the last great Mughal emperor and he didn’t want to be left behind when it came to constructing glorious Mughal architecture. His father, Emperor Shah Jahan, had built the Taj Mahal which is a mausoleum but not a mosque. Modeled after the Jama Masjid, a mosque his father had built in Delhi, Aurangazeb built an even bigger and more impressive mosque in Lahore.

The Badshahi mosque would be translated the king’s mosque in english and it certainly lives up to its name while serving as an epitome of Mughal architecture. Its exterior is made entirely out of red sandstone except the three massive bulbous domes and the cupolas of the octagonal minarets, which are made of marble. The mosque boasts the largest courtyard of any mosque in the world and the whole complex is actually raised on a platform which can be entered through a double storied main gate. The main prayer chambers can be entered through a fabulous iwan, a common theme in Islamic architecture. This marvelous center has inspired the designs of many other eminent mosques. The greatness of the Badshahi mosque is a worthy remembrance of the greatness of Mughal times. 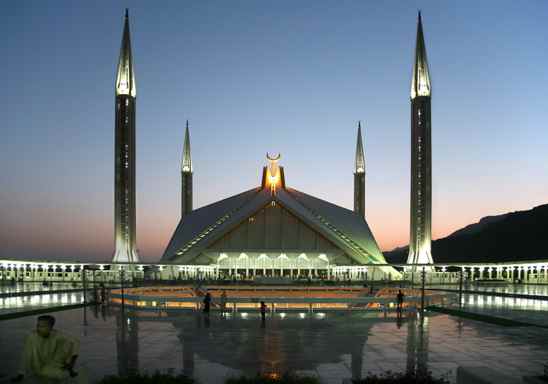 Staying in Pakistan, we come to number 6 on our list. The Faisal Mosque lies at the northernmost end of Islamabad, Pakistan’s capital. The base of the Margalla Hills, the westernmost foothills of the Himalayas provide a beautiful backdrop to this tabernacle. The Mosque was named in the honor of King Faisal Bin Abdul Aziz who funded the project and is widely accepted as the national mosque of Pakistan.

The mosque, unlike most other Asian mosques is without any domes or arches. The inspiration for its unusual shape came from an Arab Bedouin’s tent. Its prayer hall is in the shape of one massive triangle and its minarets are pencil like in their structure, probably influenced from Turkish designs. The Faisal Mosque is one of the finest examples of contemporary Islamic architecture. 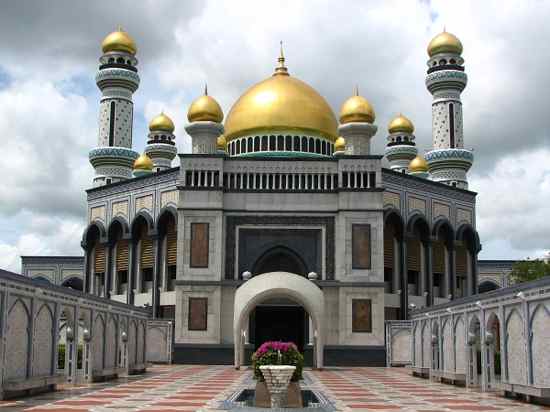 If you travel to Brunei anytime soon, you will be bereft of any true essence of this monarchy without educating yourself about its two famous mosques. Or better still, experience them. The Omar Ali Saifuddin Mosque was built by the Sultan of Brunei in 1958. It’s constitutes the focal point of Bandar Seri Begawan, the capital of Brunei. The mosque featured in this list wishes it had the enviable locality of the Omar Ali Saifuddin mosque but it gets the nod over its older counterpart because of its superior luxuriancy, appearance and size.

The Jame Asr Hassanil Bolkiah Mosque was commissioned by the current reigning Sultan of Brunei, Hassanil Bolkiah, and opened in 1994 to mark the silver jubilee of the Sultan’s rule. The mosque’s surroundings are lush with many beautiful gardens and fountains which sets contrasting tones for its brazen beauty. The conspicuous central dome along with all the other domes and cupolas of the minarets are plated with 24 carat gold. The minarets are especially thick and the interior is heavily ornamented .The roof is turquoise in color. A trip to this sultanate isn’t complete without the spectacle that is the Jame Asr Hassanil Bolkiah Mosque. 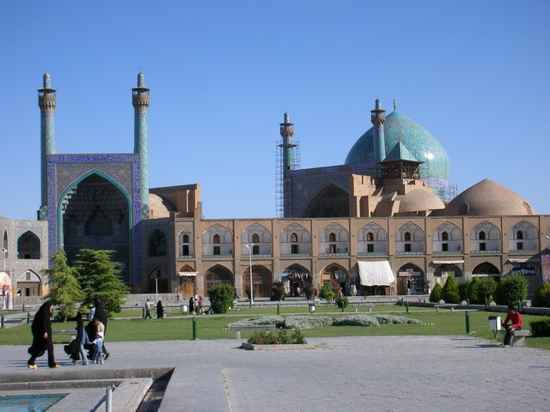 Shah Abbas I is hailed as the greatest ruler of the Safavid dynasty. It was during his era that the capital of the Persian Empire was relocated to Isfahan. The glorious Naqsh-e Jahan Square was constructed and the square’s southern façade today has arguably the best view, as it accommodates the portal of the Imam Mosque.

From this main gate, the rest of the mosque is connected via a bent alleyway to align the mosque’s court with the Mecca. The mosque is surrounded by the four iwans each at the center of its four arcades. The iwan facing the qibla, (the direction to Mecca), is the largest and most impressive which also contains an exalted blue tiled, double layered dome. The mosque’s walls are coated with a 7 color mosaic and calligraphic inscriptions which seem to be the signature of the dazzling complex. The remarkable acoustic properties and reflections underneath the grand dome should be noted. The exact completion date of the Imam mosque is disputed, but the construction is known to have begun in 1611. One thing is certain however, that the Imam mosque is Persian architecture at its best. 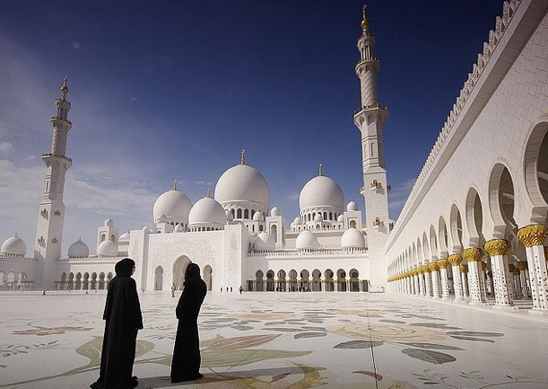 Dubai has been known for some time as a megacity filled with marvelous skyscrapers rivaling the most riveting skylines out there in the world. More impressive is the amount of time the city was conjured up in. Or from where it was forged, which was basically barren desert land. So in the midst of all the construction going on in a pre dominantly Muslim UAE, you would expect a grand mosque to be to be built by the ruling Sheikhs. In fact, the Grand Mosque is just what the locals call the Sheikh Zayed Bin Sultan Al Nahyan Mosque, an imposing 82 domed superstructure initiated in Abu Dhabi by the father of UAE himself, and opened in 2007.The mosque’s main dome has a diameter and height of 32.8 meters and 85 meters respectively, making it the largest of its kind in the world. The main prayer hall holds two world records, one for featuring the largest handmade carpet in the world and the other for having the largest chandelier in the world. Sheikh Zayed passed away in 2004 and his mausoleum is in the mosque’s courtyard. What a magnificent modern marvel his eponymous mosque continues to be. 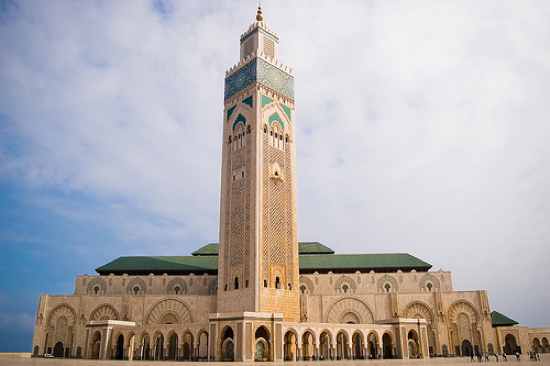 Our no.3 item of the list brings us to the port city of Casablanca, Morocco. King Hassan II of Morocco wished to endow a praiseworthy monument to his people and so with the huge cost of $800 million, this grandeur piece of Moorish influenced architecture was completed in 1993. The mosque comes with many features; it has heated floors, electric doors, a retractable roof and a laser on top of its minaret which beams towards the direction of the holy Mecca. This minaret stands the tallest in the world with a height of 210 meters, making the mosque the tallest religious structure ever built.The most remarkable attribute of the mosque has to be its location. It’s built on a promontory overlooking the Atlantic Ocean and a part of the mosque has glass floors meaning the worshippers when prostrating, can look directly at the waters of the ocean below. Unfortunately, this feature is reserved for royal use. However, the Hassan II mosque remains a huge source of pride for Moroccans. 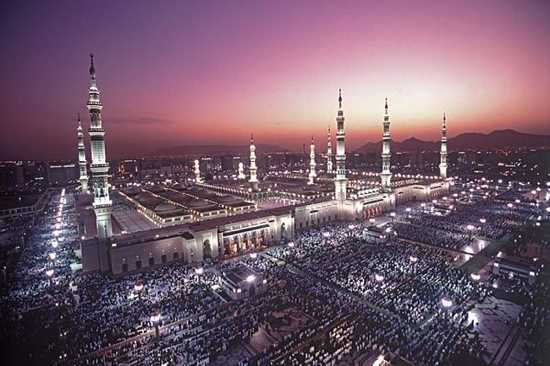 Approaching the last two mosques in the list, sanctity has become the major point of contention in the selection criterion. At no.2, I give you Al- Masjid al-Nabawi (The prophet’s mosque), the final resting place of Muhammad. Islam’s last and greatest prophet had built this tabernacle himself. The site of the mosque was originally his house, the place he settled in after his emigration from Mecca to Medina. Hence, the holy cities of Mecca and Medina, as both of these places are associated heavily with Islam and Muhammad. This mosque has been renovated many times since the age of the prophet and today it’s the second biggest mosque in the world. The second holiest as well, as evident from its position on this list. It has 10 minarets each with a height of 105m and the central green dome is the mosque’s most prominent feature, where Muhammad’s tomb is located. At the heart of the mosque is a small, special area named ar-Rawdah an-Nabawiyah (The garden of the Prophet), extending from the sepulcher of the prophet to his pulpit. The Saudi Arabian king is the custodian of this holy mosque along with no.1. 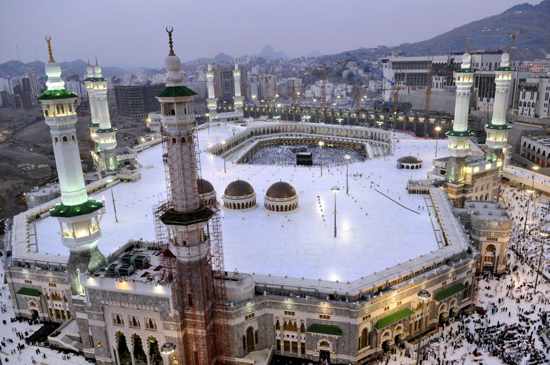 Located in Mecca, Saudi Arabia; Al-Masjid al-Harām is the biggest and holiest mosque in the world. The fact that it hosts the Kabba in its courtyard, the most sacred site in Islam, is reason enough to place it at the top of our list. It’s this very mosque that a million plus pilgrims visit every year to perform the Hajj, the largest annual pilgrimage in the world. It’s Islamic belief that the Kabba was the first building to be built on Earth by Adam and later rebuilt by Abraham and finally captured by Muhammad. Muslims around the world face towards the Kabba’s direction during prayer times. So when praying in Al-Masjid al-Harām, the people simply line up around the Kabba to pray in an encircling fashion, while in any other mosque worldwide, the people line up in neat rows all facing towards the direction of the Kabba. This huge mosque has 9 minarets and has been the subject of many refurbishments and extensions conducted by the mosque’s authorities over the years. Visually Al-Masjid al-Harām may not match up to some of the other mosques mentioned here, but its paramount importance to the Muslim faith grants it chief status.