Teotihuacan, at its prime, was one of the largest cities on earth, filled with massive pyramids that rivaled the wonders of the Egyptian pharaohs—and everything about it is a mystery today. Little to nothing was written down to tell the story of Teotihuacan, but little hints in the ruins left behind have uncovered some of its past.

10Nobody Knows Who Built It 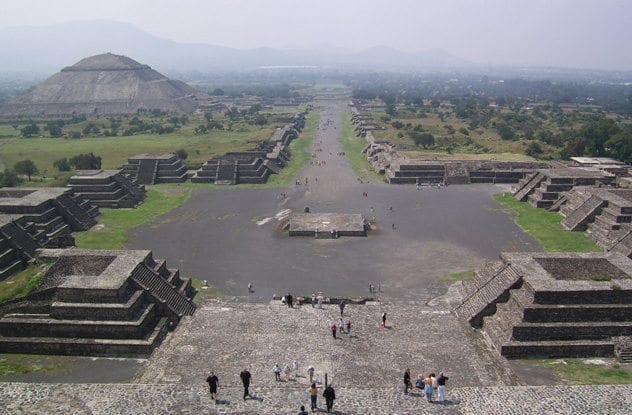 When the Spanish Conquistadors arrived in America and saw Teotihuacan for the first time, the Aztecs were living there. They had moved their people in and taken it as a part of their empire—but they didn’t build it. It had stood for 1,000 years before the Aztecs and 500 years before the Maya ever came to Mexico.

Nobody knows who built it. A group called the Toltects tried to take credit, but the city had been in Mexico for longer than they had, as well. Some of the archaeology, though, has left behind a few little hints of where it came from.

The city was started in 400 BC, built around a cave carved into the earth by a flow of lava. The people who found that cave seemed to have believed it was a holy spot. They set up a temple on top of it. Gradually, it seems, little settlements were built around it, added by pilgrims who came out to see the holy cave.

9A Volcano Made It A Metropolis

That small settlement, in time, became a religious landmark—and it’s believed that it took the death of thousands to make that happen.

Around the time Teotihuacan started to boom into a city, a volcano in Cuicuilco erupted. A huge settlement of people there was wiped out, and the scattered survivors fled out into the wilderness in search of a new home. Soon, they made their way to Teotihuacan.

Their lives, though, had changed. They’d now seen the power of the natural world and the destruction it could wreak on ordinary lives. Their lives, like never before, were focused on the gods. Their new home, Teotihuacan, became more than just a city. It was a desperate shelter against the powers of nature, built to earn the protection of the gods.

The pyramids, historian Esther Pasztory believes, were built to imitate the volcano that had destroyed their home. It was meant to show the people that priests had the powers of the gods and that they could keep them safe. And it may have been the start of a new order of religious devotion across the whole country.

The refugees in Teotihuacan, once they’d settled in, would make treks back to their old home in Cuicuilco. There, they left behind stone figures built in their new city in tribute to the place their ancestors called home. 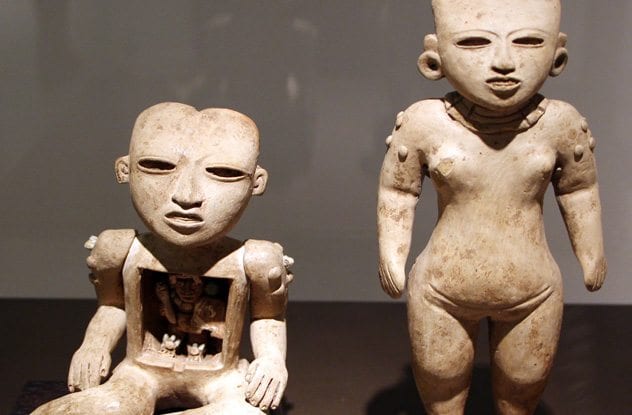 The gods of Teotihuacan craved blood. They weren’t all the same gods as those of the Aztecs or the Mayas, and there’s a lot we don’t know about them—but it’s clear that they believed that their gods demanded human sacrifices.

In the tunnel under the Pyramid of the Sun, four burial sites filled with human sacrifices have been found, made when the pyramid was built. They aren’t all adults. Three of the burial sites left behind have the remains of dead children who had been sacrificed to appease the gods.

It’s believed that a new set of bloody and brutal sacrifices were given to the gods as each new layer of the pyramids was built. This wasn’t only at the Pyramid of the Sun. Under the Pyramid of the Moon, they buried a whole array of wild animals, along with 12 human corpses—10 of which are missing their heads.

7The Rituals Of The Pyramid Of The Sun 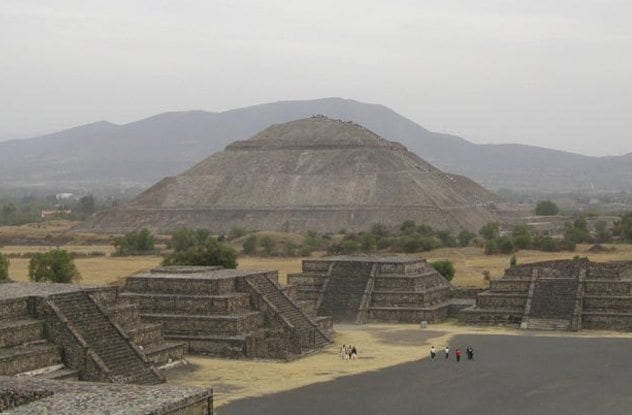 They may have done horrible things to create them, but those pyramids were architectural wonders. They were two of the largest buildings in the world. Even today, the Pyramid of the Sun is still the third-largest pyramid in the world.

It was built over the sacred cave that started the city, the place they believed the Sun was born. At the time, there was an altar place on the top for rituals, although we can only guess what those rituals were. Perhaps they simply prayed—or perhaps, like the Aztecs who followed them, their priests went there to carve hearts of human sacrifices.

They left behind jade masks, found only the homes of the Teotihuacan elite. When they held these ceremonies, it seems, the most powerful men in the city would join the priests at the Pyramid of the Sun, their faces completed obscured under a sheet of green jade.

6It Was The Largest City In The Western World 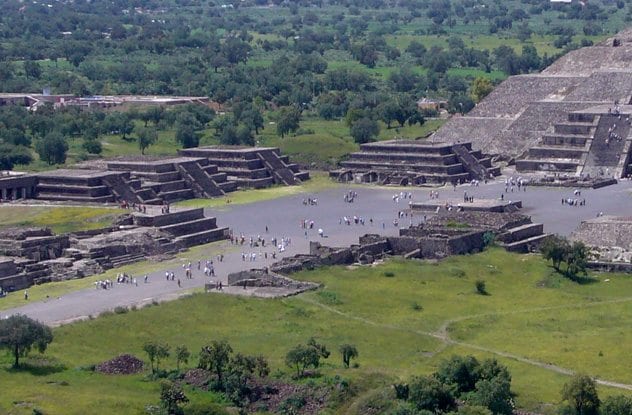 By 100 BC, Teotihuacan went from being a temple surrounded by a few domiciles to being the biggest city in the Western world. By some estimates, there were 200,000 people living in Teotihuacan at its peak. No city would match its size until the 1400s, more than 1,000 years after it reached its zenith.

It’s believed that the city was so massive because it was a religious epicenter of the whole area. Every part of the city was built on religious principles. It was laid out in a rectangular grid, patterned to follow the movements of the Sun. A massive road ran through it, called the Street of the Dead, directing people to the great pyramids in the center of the city.

The city boomed after those pyramids were built. People from every corner of the land came to live there, and for more than 700 years, it was the biggest city in its people’s known world.

5It Was A Multicultural City 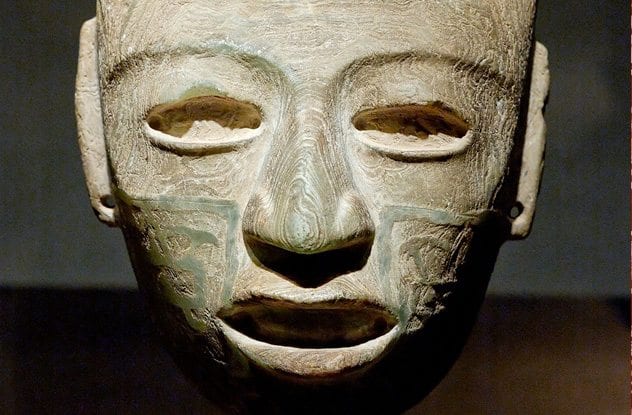 The Aztecs didn’t know who lived in Teotihuacan in its prime. They had no idea who the people were that created this massive, amazing city. As it turns out, though, they might not have any one group of people. Teotihuacan seems to have been a multicultural city, almost like an ancient New York.

Each part of the city seems to have been divided up into cultural areas, sort of like the Chinatowns and Little Italys we find in modern cities. There were districts full of Mayans, Mixtecs, and Zapotecs, each with its own unique temples and their own unique relics.

That doesn’t mean, though, that everyone was equal. The city was designed to keep commoners in their own slums. There, they were allowed to set up temples and carry on rituals to their own gods. But they were kept from the center of the town, where the elites, covering in jewelry and jade, held ceremonies atop the great Pyramids.

4They May Have Commanded Power By Force 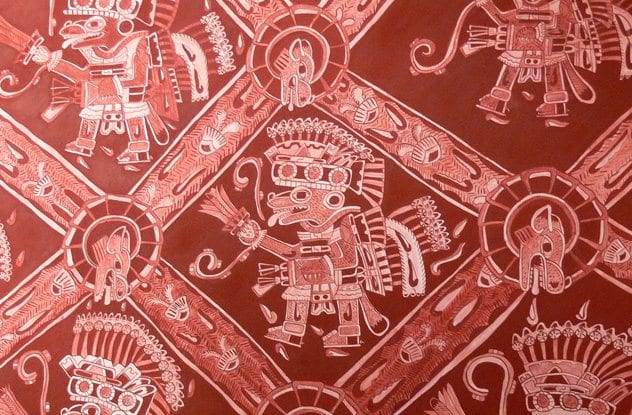 Teotihuacan had massive power over the people around them. Products made by the people there were traded all around the country, and their beliefs seem to have completely reshaped the religions of Mesoamerica.

It’s not entirely clear how the people of Teotihuacan commanded such power over the nations around them. The people may have simply been in awe of their incredible projects—or they may have been forced at the point of a sword.

Murals across Teotihuacan depict the warriors that once guarded the city, their eyes protected by shell goggles, their heads adorned with feather headdresses, and dart throwers held in their hands. There’s reason to believe these warriors were put to use to keep the people in line.

The city held the Temple of the Plumed Serpent, a massive pyramid dedicated to the celebration of war. It is covered in sculptures of feather serpents representing their god of war. When it was completed, 200 people were sacrificed, their hands tied behind their backs and buried in pits beside the building. The victims aren’t local—they’re people from other cities, defeated, captured, killed, and buried under the Teotihuacan shrine to war.

3Secret Tunnels Under The City 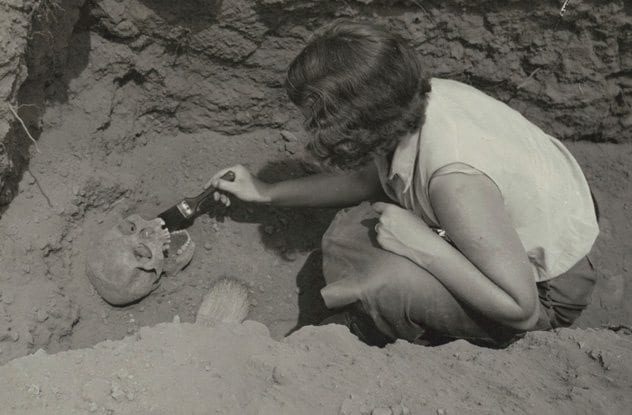 Underneath the Temple of the Sun and the Temple of the Plumed Serpent, the people of Teotihuacan built long, deep tunnels that lead to the main courtyard. These were secret places used for mysterious purposes, sealed for thousands of years before they were discovered.

A sinkhole at the foot of the Temple of the Plumed Serpent revealed the one there. It ran 330 feet from the temple to the courtyard, taking anyone who entered through a massive cross-shaped chamber.

These tunnels weren’t just used to move around. They seem to have been places where sacrifices were made to the gods. Inside the cross-shaped chamber, there are offering left behind: elaborate necklaces, figurines, pottery—and human skin.

2The Fall Of Teotihuacan 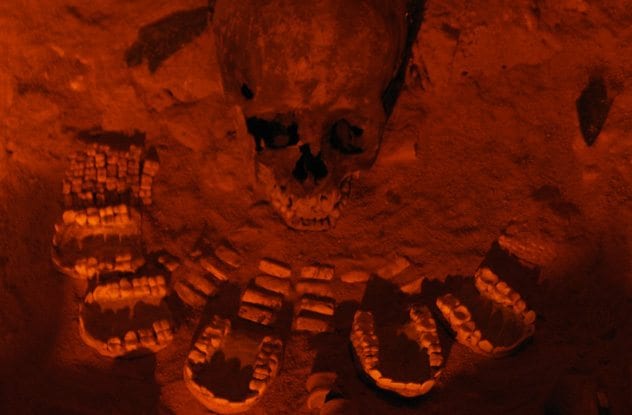 By the time the Aztecs had come to Mesoamerica and found Teotihuacan, the city was in ruins. They had no idea what had happened, how such a massive city could have collapsed—and, today, we only have our best guesses.

The most popular theory, is that there was a violent uprising. Around 750, the commoners who had been forced to live on the outskirts of town turned against the elite.

A massive drought hit the area around the time, and it’s likely that the poor were left starving in its wake. They stormed the center of the city, burning it to the ground. The massive government buildings that belonged to the elite were targeted, and their artwork and sculptures were destroyed.

When the city fell, the people left. They separated and formed new communities, commemorating their new towns with human sacrifices. In one case, 150 people were slaughtered to consecrate a new land. Then, in short time, the people who had once lived together turned against each other and a new era of war and chaos began.

1The Aztecs Copied Their Religion 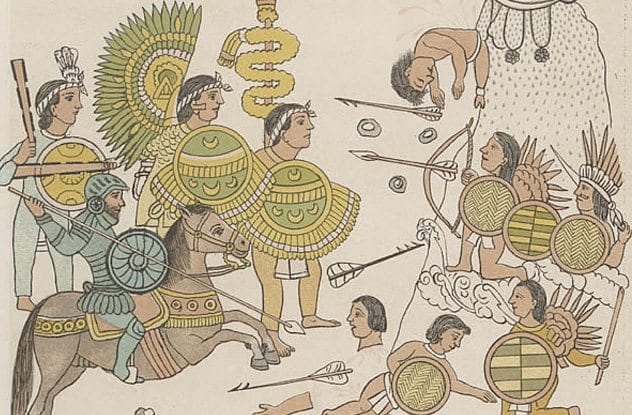 For nearly 600 years, the city laid in ruins. The, in the 1300s, the Aztecs moved in. They may have stumbled upon by chance, finding, lost in the jungle, massive buildings that towered higher than anything they had ever seen in their lives, in the center of a city unlike any they’d ever known.

It’s believed that the Aztecs took their religion from the beliefs left behind in Teotihuacan. Like the people there, they worshiped the Plumed Serpent, who they called Quetzalcoatl. They copied their pyramids. They followed their habits of human sacrifice. They carried they found in the great city back to their own homes and treated them as sacred relics.

More than 600 years after the last person left Teotihuacan, its influence was still reshaping the world.