In the summer of 1893, mankind’s first Ferris wheel was unveiled (not literally) at the World’s Columbian Exposition in Chicago, Illinois, in commemoration of four hundred years since the European discovery of the Americas. The legendary structure was designed by George Washington Gale Ferris, Jr., a Pittsburgh steel engineer, and was a direct response to the showstopper of the 1889 Exposition in Paris, the Eiffel Tower.

Since that time hundreds of Ferris Wheels, or “observation wheels” as the most colossal ones are also known, have been built around the world. This list ranks the ten best that are currently in operation. Evaluations were based not only on size (only three of the world’s twelve tallest make the cut, and two of the top five) but also on beauty, uniqueness and other historical noteworthiness. Also, the environmental context in which the wheels are found plays an important role, and consideration was made to represent a fair variety of global locales. This list, in that regard, is intended to serve as a master checklist for enthusiasts of Ferris Wheels and of the complete Ferris Wheel experience. 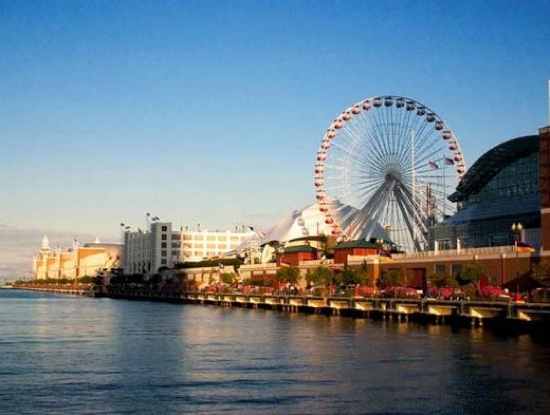 For obvious reasons, Navy Pier on Chicago’s Lake Michigan coast (which once harbored fresh-water submarines and WWII carriers) is a great place to begin our countdown. There, close to the site of the first Ferris Wheel, and surrounded by a variety of museums and theatres, proudly stands a majestic white Ferris wheel that represents everything a classic Ferris Wheel ought to be, providing breathtaking views of the city—from the wheel—and vice versa.

Although not a true replica of the original (it carries 4 additional gondolas, but is about 100 feet shorter with a much lower capacity), its design was inspired by 1893’s Expo, and as a tribute to that era it is a striking statement, indeed. The original hasn’t existed since 1906.

The price is $6 for a ride that lasts about 7 minutes. 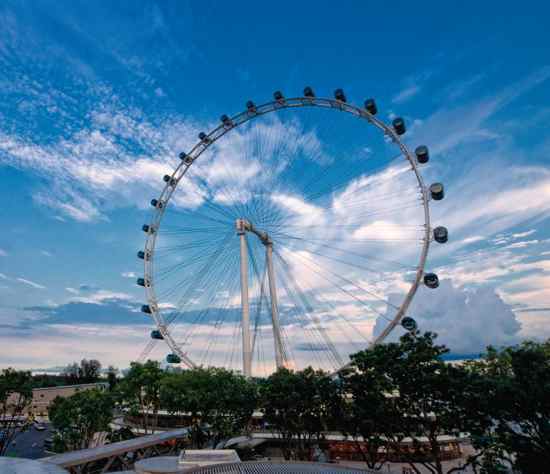 On February 11, 2008, the 541 ft. (165 m) Singapore Flyer began to rotate and officially commenced its reign as the world’s tallest ever Ferris Wheel, only the ninth wheel to hold that title, and its current holder.

The modern marvel boasts 28 air-conditioned capsules, accommodating 28 passengers each, with full handicap accessibility, including restrooms, ramps and champagne and cocktail service. The public was first admitted at a ticket price (in Singapore dollars) of $8,888 – a lucky Asian number. Later that year, at the urgent behest of feng shui experts, the direction of the wheel’s rotation was reversed and it now spins clockwise facing the marina.

Possible contenders to the Flyer’s title as world’s tallest are projects proposed for Beijing, Berlin, Dubai and Bangkok, and to a lesser extent Las Vegas and Baghdad, although at the moment none of these prospects appear to be ready to move forward. 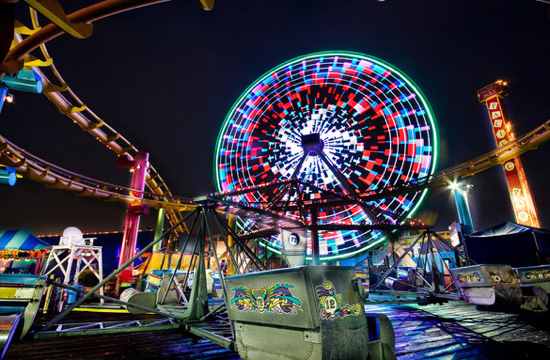 Located at the west end of Highway 10 in Los Angeles, at the unofficial finish-line of Route 66 in California, the Santa Monica Pier has been the home of two great Ferris Wheels, beginning in 1996. The original “Pacific Wheel” featured 5,392 light bulbs (2,392 white, 1,500 red and 1,500 blue) and appeared in at least 71 television commercials, 28 films and 13 music videos during it’s 12-year run. The wheel was then sold on eBay for $132,400 with half of the winning bid being donated to the Special Olympics, with an additional donation of $1 per rider on it’s last day (4 May, 2008) being given to the Los Angeles chapter of the Society for the Prevention of Cruelty to Animals.

It’s replacement, an almost identical wheel, carries spacious, covered, open-air octagonal gondolas and is the world’s first and only solar-powered Ferris wheel. It’s 160,000 energy-efficient LED lights, however, can dazzle the beach horizon as well as its predecessor.

Standing nearly 90 feet above the pier and 130 feet above the ocean waves, the Santa Monica Ferris Wheel is more breathtaking than California’s two other beachfront Ferris Wheels (which can be found on Newport Beach’s Balboa Peninsula and at the Santa Cruz Beach Boardwalk on Monterey Bay), but it is the shortest wheel on our list. 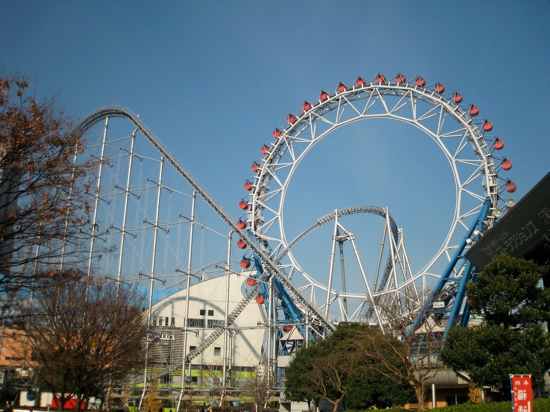 The Big-O Ferris Wheel is part of Tokyo Dome City, a massive, state-of-the-art entertainment and shopping complex in Tokyo, Japan. It is special among world Ferris Wheels for having no center axel, no spokes, and no internal support structure at all. Instead, the wheel is held up by two arrow-shaped side supports that honestly look like pairs of chopsticks. To emphasize this hublessness, a roller coaster track (the Thunder Dolphin, Japan’s tallest and fastest) runs directly through the middle of its open 200 ft. rim.

If you happen to be in Tokyo, or are planning a trip there, you can easily find Tokyo Dome City and the Big-O Wheel by taking any JR line to the Suidobashi Station, located in Bunkyo ward. 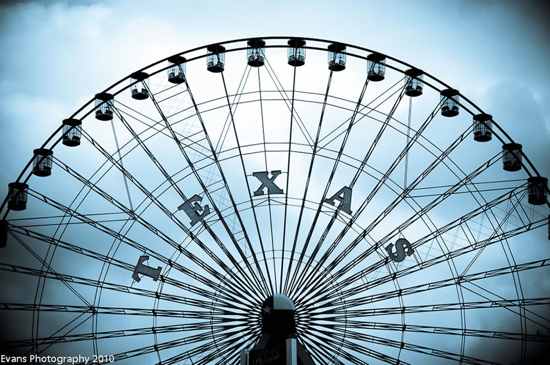 The Texas Star in Dallas, Texas, is North America’s tallest Ferris Wheel and has been the centerpiece of the Texas State Fair since 1985, when it was built for Texas’s sesquicentennial. The 21-stories-high wheel contains 44 gondolas, capable of carrying six each, and requires a operation staff of 18. Prior to 2008, the wheel was illuminated by 16,000 incandescent lights, but like the wheel at Santa Monica, the Texas Star underwent an energy-efficient upgrade and now implements an LED system.

Although it is difficult to count exactly, it is estimated that the 3-week-long Fair attracts 3 million visitors annually and contributes more than $300 million to the Dallas economy. Attractions at the fair include concerts, auctions, an auto show and an assortment of unique culinary items such as deep-fried Twinkies, deep-fried Oreos, deep-fried butter, deep-fried banana splits, deep-fried beer and deep-fried Coke. And from what better view to take in all in than the top of the Star? 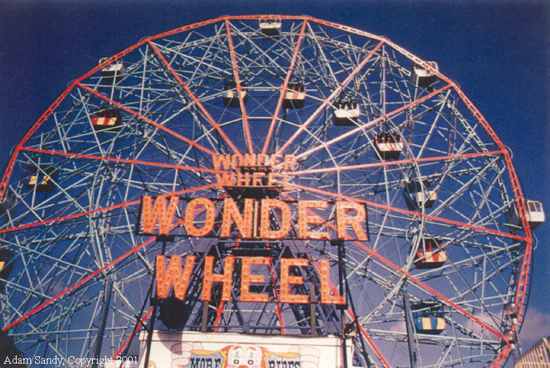 An eccentric wheel (really, it was built by the Eccentric Ferris Wheel Company), this type of Ferris Wheel is different in that not all the passenger cars are permanently attached to the outer frame of wheel, but some, instead, slide on tracks within the wheel’s frame as the wheel rotates. Built in 1920, the Wonder Wheel was the first Ferris Wheel of this kind and is located on Coney Island, in Brooklyn, in New York City. Alongside the Cyclone roller coaster and Nathan’s hot dog shop, it is one of Coney Island’s most iconic and popular attractions.

It is 150 ft. (46 m) tall, with 24 passenger cars (16 of which move positions and 8 which remain stationary on the wheel) and a total rider capacity of 144. The other notable Ferris Wheel of this variety, a carbon copy essentially, is Mickey’s Fun Wheel at Disney’s California Adventure in Anaheim, built in 2001.

But the Wonder Wheel was the original. At the Wurstelprater amusement park in Vienna, Austria, stands a 100-plus-year-old Ferris wheel (one of the first, in fact) that held the title of world’s tallest for over sixty of those years. It is called the Wiener Riesenrad (literally, “Viennese Big Wheel”) and was built for the 1897 Golden Jubilee of Franz Josef I of Austria, in celebration for his fifty years as Emperor of the Austrian realm. It seems as though one enduringly majestic figure deserved another.

In war-stricken 1916, the year of the emperor’s death, the wheel managed to survive a demolition order that was never executed because of a lack of funds. It was, however, seriously damaged during World War II, and after being restored it now only carries 15 passenger boxes, half of its original 30. We are all grateful that it still stands, as it is such a beautiful symbol for Vienna, and one of the greatest Ferris wheels the world has ever seen, measuring 65 meters in height (about a foot taller than the Texas Star). The wheel, or clock, is the crowning jewel of Minato Mirai 21 (literally, “Future Harbor 21”), the downtown seaside district of Yokohama. The area is also home to several other important and modern works including Landmark Tower (Japan’s tallest building), Yokohama Marine Tower (the world’s tallest lighthouse), as well as a symphony hall, a convention center, an art museum and several of Japan’s largest hotels and residential towers.

In 1999 the wheel was disassembled and then raised again onto a taller base, increasing it’s height by 16 ft. It contains 60 passenger boxes, each with a capacity of 8, and requires about fifteen minutes for one rotation. 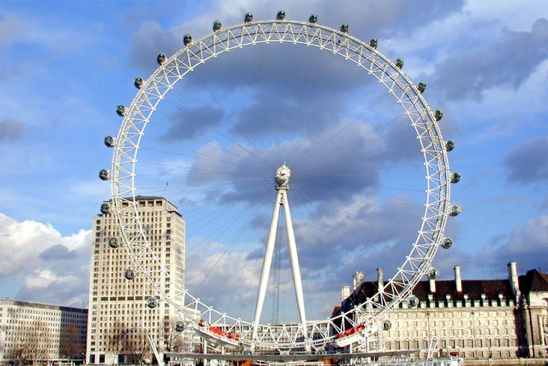 Presently the third tallest Ferris Wheel in the world, at 443 ft. (135 m), and the largest in the western hemisphere, is the renowned London Eye on the Thames, which is a masterpiece for several reasons.

From an architectural standpoint, the wheel is technically a cantilever and is supported on only one of its two sides. This provides passengers with a continuously unobstructed view of the North Bank towards Westminster Palace and other landmarks. Also, the capsules are attached to the outside of the rim structure by rotating circular mountings (as opposed to merely being suspended – the Southern Star in Melbourne also has this feature), ensuring a full 360-degree panoramic view from the top.

To open the new millennium, it was formally dedicated as the world’s tallest in a ceremony conducted by Tony Blair, on New Year’s Eve, 1999. To this day it is the focal point for New Year celebrations in London, when fireworks are launched from the wheel itself.

The wheel moves slowly, at about 0.6 mph; slow enough for passengers to board and disembark at ground level without the wheel stopping. One full rotation takes about 30 minutes, with about 8,000 rotations being made in one year, carrying more than 10,000 passengers a day, and more than 3 million annually. One adult ticket costs £14.50. 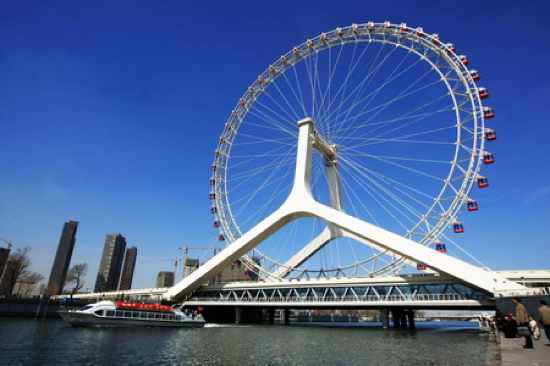 Six of the ten tallest Ferris Wheels in the world are in China, including three equally towering wheels in Changsha, Suzhou and Zhengzhou, plus the even more gigantic Star of Nanchang, which is second only to the Singapore Flyer. So it is appropriate for a Chinese wheel to be given top honors on our list, and the Tianjin Eye especially, for its distinctively arresting beauty, not next to the river, but above it.

Instantly recognizable, it is supported by huge upside-down “Y” buttresses and at night is gloriously bathed in fluorescent two-tone colors (gold and pink, for example, or turquoise and lime), the reflection of which is even prettier. Elegant and yet, accommodating up to 770 passengers per hour in 48 capsules, she belongs to the same heavyweight class as London Eye and Cosmo Clock. Creating something so dizzyingly enormous, and at the same time so attractive, is a feat worthy of much admiration.

It is the best Ferris Wheel in the world. 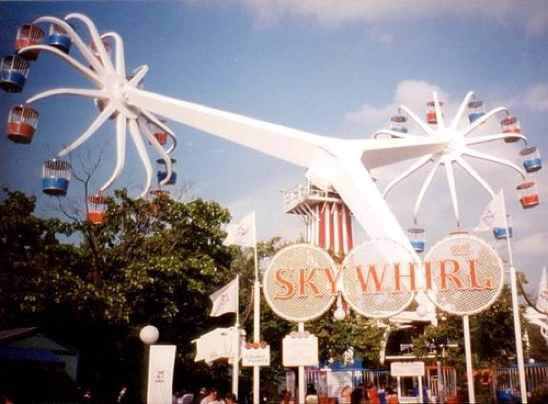 I include the Sky Whirl as a bonus item because, first, it no longer exists, and second, because it may not have classified as a true Ferris Wheel. But, without a doubt, it must be mentioned. It was a “Triple Wheel”: three rotating Ferris Wheels held up by a three-armed structure atop a single tower.

Thus, like so many things in life, we have come full circle, again. I hope you enjoyed the ride.