The concept of the badass, while the term itself its a relative neologism, is as old as time itself. Novelists, poets and playwrights through the ages have witnessed, and utilized, the appeal of the powerful character of a badass. Here are some canonical examples. There are overlooked literary badasses, of course. I plan to submit a sequel to this list, denoting populist literary characters. Think Harry Potter series, LOTR, etc. If you think I have missed any classic tough guys of note – do tell!

Disclaimer: I am an agnostic, and do not wish to perpetrate my views in any way. That is not the purpose of this post. My use of the bible and biblical references in this text respect it not only as a religious text, but as a work of high art also. 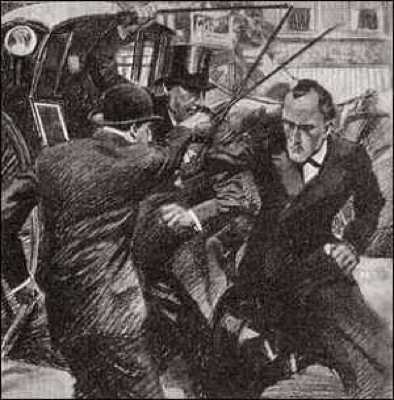 The original model for the now archetypal ‘super-sleuth,’ Holmes is a master of two things: deduction, and being hard.

Holmes sports cranial badassery of an unequaled level. A private detective, Sherlock doesn’t decide which case to take based on prospective profit, risk level or who happens to ask – he takes the cases that interest and challenge him. He has been known to draw conclusions from the smallest and most intricate of details, such as the scratches on the edge of a man’s pocket-watch.

Not only is our first entry a formidable thinker, he is also wondrously proficient at delivering a beating, as demonstrated in a rather cool slow-mo clip in the recent blockbuster featuring our subject. He is familiar with pistols, swords, hand-to-hand combat including martial arts and boxing and singlestick (hitting someone with a walking stick, apparently).

Finally, there is the matter of the deerstalker. This hunting cap, famously connoted with the detective, is never, not once, worn by Sherlock Holmes. The closest he comes is wearing a “close fitting cloth cap” in the Boscombe Valley Mystery. I’m pleased to clear that up. 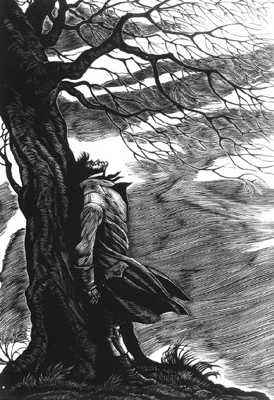 One of a few wild cards in this list.

In his younger days, Heathcliff shows signs of being a wuss. Often excluded due to his difficult nature and the fact that he is adopted, he spends more time whining than anything.

However in his maturity, Heathcliff returns from a long period of absence. He has made a fortune in said absence (it is hinted he has also been serving time in the military) and eventually uses it to gain control of the house, and the people, of his tortured youth. He later beats the crap out of his childhood aggressor, Hindley, when he locks him out of Wuthering Heights and threatens to shoot him. Heathcliff loses points for being a wife-beater, and at one point (if memory serves) he narrowly stops himself from letting a child fall to their death. However, he gains serious badass points for having only one name.

While, admittedly, Byronic hero Heathcliff is not an obvious choice, you must agree: the 19th century emo does have some enduringly badass, whilst not strictly morally viable qualities. 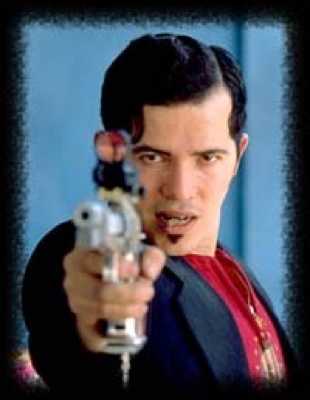 “Prince of Cats” Tybalt is a major rabble-rouser, making him also quite the badass.

Described by Mercutio as being a seriously good duelist, Tybalts main badass quality is his fighting talk. He is literally a renaissance Arnie, with quips such as:

“Peace? I hate the word.
As I hate hell, all montages, and thee.
Have at thee, coward.”

Infuriated by Romeo, unintentionally, when the young lover gets him in trouble with his influential uncle at a big shindig, Tybalt does what all badasses do: get vengeance. He later murders good Mercutio before getting himself seen off by Romeo.

7
Hedda Gabler
from the stage-play of the same name 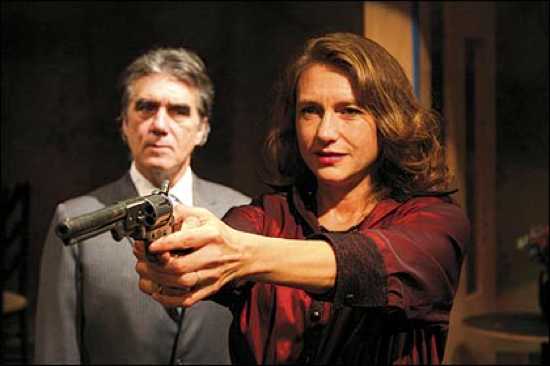 Hedda is Henrik Ibsen’s creation, a notorious feminist badass. During the play, she is responsible for as many as three deaths (her own, her unborn child, her ex-lover’s) over a period of no more than three days.

Similarly to Holmes, she is very fond of firearms. Gabler is known to sit in her back garden blasting shells from her dead father’s revolvers into the distance, out of boredom, terrifying unsuspecting visitors half to death. Her husband George often seems terrified of her, and Hedda eventually commits suicide by shooting herself in the temple. Perhaps a controversial thought, but shooting oneself in the head arguably requires a high amount of bravery and, thus, she is awarded extra badass points.

6
Macbeth
from the play of the same name 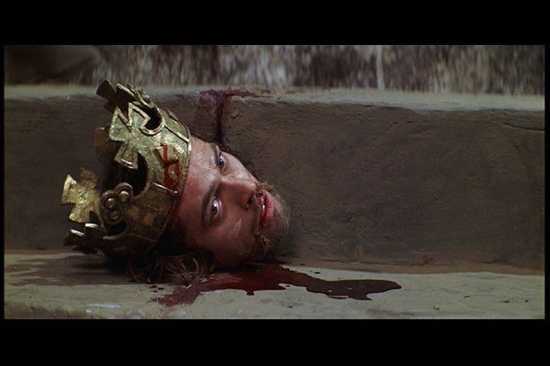 One of my personal favorite Shakespeares, Macbeth is a play about a general who, after an encounter with some prophetic witches, decides he is tired of taking a back seat and is just gonna take the hell over Scotland, using only his “brandished steel, smoked with bloody execution.”

“I go, and it is done; the bell invites me.
Hear it not, Duncan, for it is a knell
That summons thee to heaven, or to hell.”

“Lady Macbeth: Are you a man?
Macbeth: Ay, and a bold one, that dare look on that
Which might appall the devil.”

Despite turning into a nihilistic whinge after the death of his wife, and flaking out when he has hallucinations, Macbeth puts on a great show with every badasses’ dream showdown when the entire rebel army comes to his door. Like a Shakespearean Tony ‘Scarface’ Montana, our badass goes out in a blaze of not so glorious battle.

5
Beowulf
from the epic poem of the same name 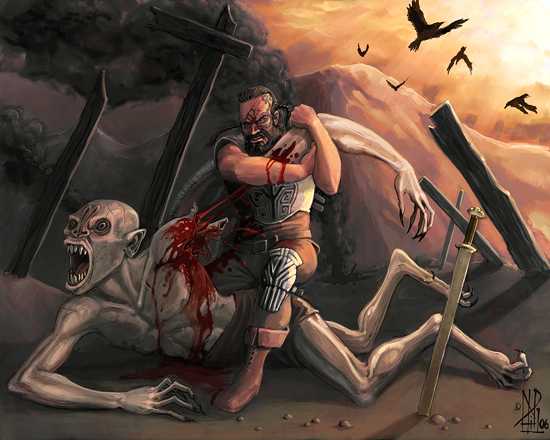 Beowulf is a viking. This instantly guarantees him a badass rating of at least 9.0.

From ripping off the arms of demons, to partying, Beowulf is a legend in its truest form. Probably our oldest example of a literary badass, the composition of Beowulf was somewhere between the 8th and 11th century, and is written mostly in Old English. If you have never tried to read Old English, never try to read Old English.

You thought Leonidas was a hard-ass for dying in battle with the Persians? Beowulf died from wounds inflicted by a dragon. And he managed to kill it before popping his clogs. The badass scale is off the chain! 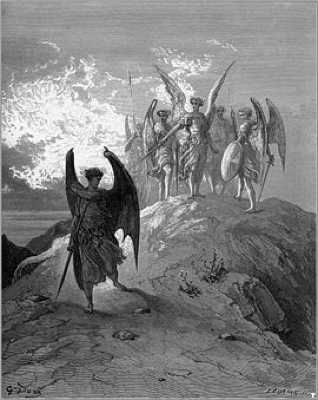 Lucifer is the antichrist.

Look up the term ‘bad’ in the dictionary, and if it is one of those rare dictionaries with pictures in it, there will be pictures of Lucifer in his various incarnations plastered all over the word.

Lucifer led a rebellion against God himself. That takes cojones. (At this point I’d like to reiterate that I do not condone any of these actions, most certainly leading an army against God.) 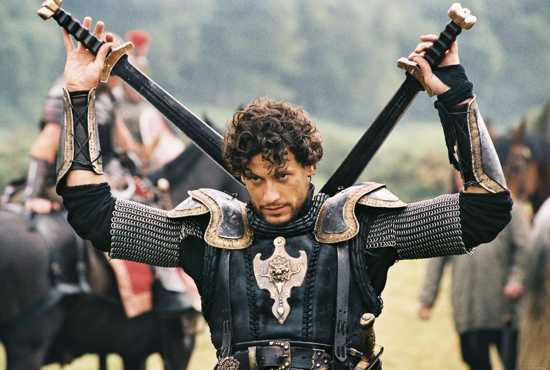 First included in the legend of Arthur, by some french bloke, long after the stories initially began doing the rounds.

Lance-a-lot has a weapon. In his name. No more will or needs to be said.

He sleeps with the king’s wife. Because he can.

He found his name under a rock, after winning a fight against initially ten, then twenty, knights.

He did, however, mellow in later life and became a priest.

2
Achilles
notably, but not limited to, Homer’s Iliad 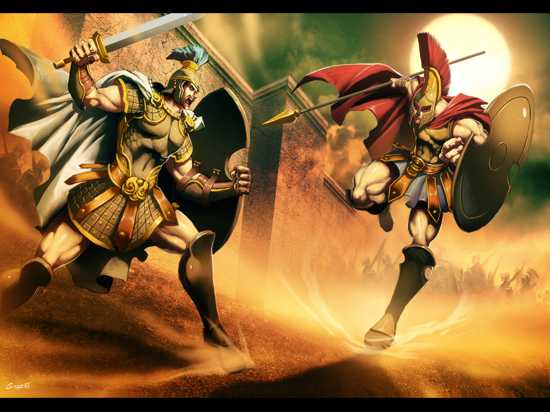 Homer’s characters don’t own last names, they are defined by character. Achilles is often referred to as swift-footed, or godlike. Both are an understatement.

A demigod, Achilles was literally dipped in the river Styx to make him tougher. Said dipping left him completely invincible, save for the part which his mother, Thetis, held him by while she dipped – his heel.

Later, our tough guy is dispatched by arrow to aforementioned heel, giving us our modern day expression of Achilles heel – point of weakness. This by no means takes away his ability to kick a lot of ass. As seen in the blockbuster film Troy, Achilles (Brad Pitt) plays a serious part in the Trojan war, leading his famously hard company, the Myrmidons, as part of the Greek army.

After beating one of the Trojans’ top fighters, Hector, in a duel, Achilles drags his body by chariot in a badass but dishonorable manor, thus losing points. 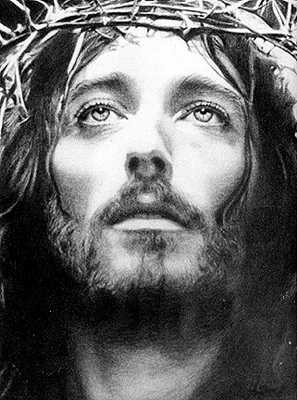 In the short 30 odd years of his life, The Messiah exhibited some truly badass behavior, the most notorious of which is coming back from the dead. No one before, or since, has managed such a feat.

Along with Macbeth, Jesus is one of the only badasses on this list who we can convincingly prove existed, and is worshiped by millions of people worldwide. As the Savior of human kind (rather nervously do I make this comparison… but, kind of like a new testament version of the terminator), I Believe the Messiah is well deserving of top spot in this list.