The Papacy is one of the oldest functioning institutions in the world. Since the position of Pope involves many rituals which are poorly understood, the Papacy has attracted many strange stories. How does one go about becoming Pope? Here are ten of the steps which cover the transition from one Pope to another, plus a bonus step which is definitely not required.

10
The Death of the Previous Pope 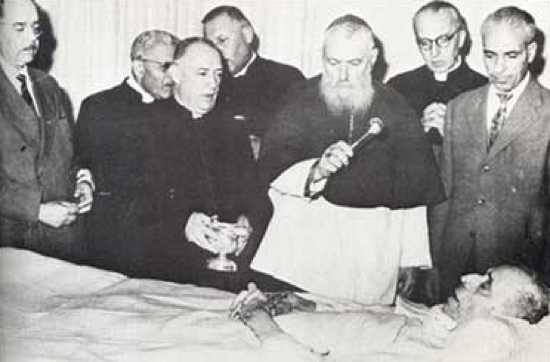 The death of the previous Pope is not strictly necessary for the election of a new one. Under canon law, the Pope is able to resign at any time he chooses, it is just that no Pope has resigned since the time of the Great Schism which left the church with several competing Popes. During the Second World War Pope Pius XII drew up a letter of resignation to be put into effect if he were held captive. Except in such extreme cases, the man elected to the Papacy can expect to hold it for life. When the Pope does die there are several rituals which are performed. First, a doctor will check the Pope for signs of life. If he finds none, the Cardinal Camelengo, chamberlain, will call the dead Pope’s baptismal name (not his Papal name) three times to see if he responds. Previously, the Camerlengo would also strike the Pope’s forehead with a silver hammer to check for a response, but this has been abandoned. [Pictured: Venerable Pope Pius XII, died 1958]

9
Declaration of the Death 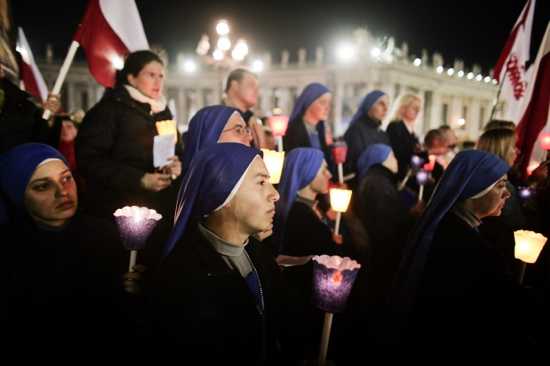 Once the Pope has been confirmed as dead, the Camerlengo removes the Ring of the Fisherman for later destruction. The ring, symbol of the Apostles’ role as fisher of men, is unique to each Pope and was used as a seal. Destroying the ring of the dead Pope prevented the fraudulent sealing of documents. The Camerlengo ends the reign of the previous Pope by declaring his death before the officials of the Apostolic Camera, part of the church administrative system. Formal letters are sent out to each of the Cardinals informing them of the death of the Pope, so that they may make arrangements to attend the funeral and election of a new Pope. There has been debate over whether it is appropriate to inform Cardinals of the Pope’s death via electronic means, but since the death of a Pope will be widely covered by the media it is somewhat moot. 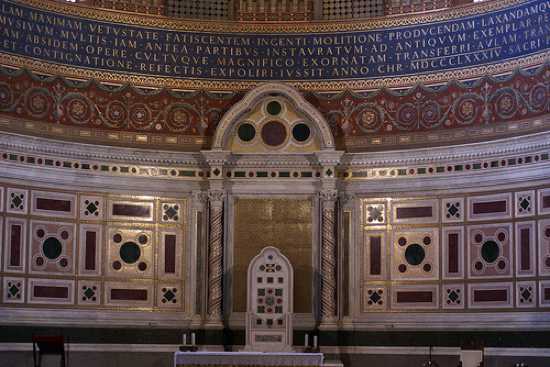 The period between the death of a Pope and the election of his successor is known as seed vacant (The seat being empty). During this period, the heads of all administrative bodies of the Church resign except for three officials – the Camerlengo, the Cardinal Vicar of Rome and the head of the Apostolic Penitentiary. All other heads of office serve only at the pleasure of the Pope, and his death removes them. The Camerlengo is the effective head of the church – though in a very limited fashion – during this period. Between Popes, the coat of arms of the Vatican is changed to one without the Papal tiara to signify that there is no Pope. Euros minted during this period after the death of Pope John Paul II bear the coat of arms of the Camerlengo, but recent changes to minting guidelines issued by the EU mean this will no longer happen. Such coins are now collector’s items.

7
Burial of the Pope 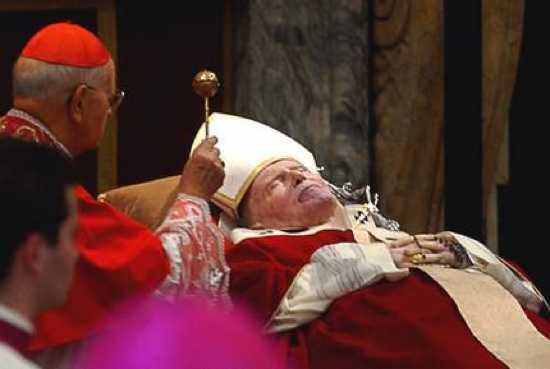 The body of the Pope is ritually cleaned and dressed in vestments. A mass is celebrated for the soul of the deceased Pope and then the Rite of Visitation begins. The body of the Pope is placed in either St Peter’s Basilica or the church of St John Lateran for people who wish to pay their respects to see him. When the litany of the Saints is sung, the response “Ora pro nobis” (Pray for us) is changed to “Ora pro eo” (Pray for him). After the lying in state the funeral of the Pope begins. A requiem mass is celebrated, led by the Dean of the College of Cardinals. Inside the locked church, the Pope’s body is placed inside a cypress coffin and a white veil placed over his face. When the coffin is sealed the doors of the church are opened and a homely delivered on the life of the dead Pope. After much prayer and singing, the coffin of the Pope is removed to the Basilica of St Peter for burial. Here the cypress coffin is placed inside a lead (or zinc) casket. This is then placed inside an elm coffin and sealed with solid gold nails. The Pope is then buried in a tomb underneath the Basilica. [Pictured: Pope John Paul II] 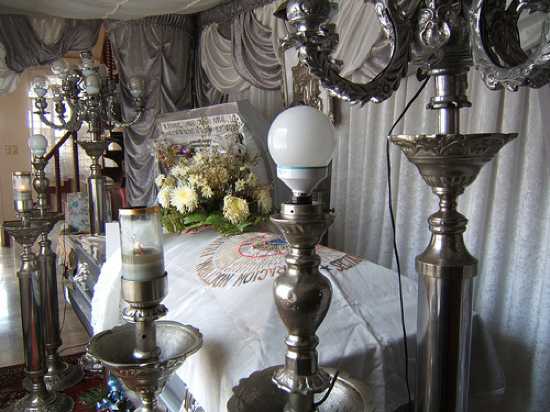 The novemdiales are the nine days of official mourning and prayer for the deceased Pope. On each day a mass is celebrated by a different Cardinal. This time of mourning is also used by the Dean of the College of Cardinals to make all the necessary arrangements for the conclave which elects the next Pope. The novemdiales also offers a chance for Cardinals, who may never have met, to get to know each other. They are not allowed to discuss the election of the next Pope directly, but surely matters which touch on it are talked about. There is usually a great deal of attention given in the Italian press to those Cardinals thought to have a chance at being elected. These Cardinals are referred to as Papabile, or Pope-able. Being favorite in the election can be a bad thing, however, as the old saying goes “Enter conclave a Pope, leave a Cardinal.” 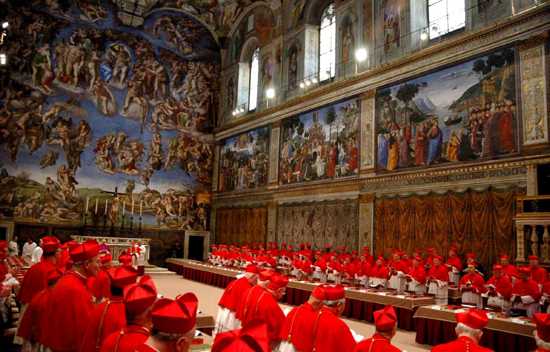 The election of a new Pope used to take a very long time. This was caused by the length of time it took Cardinals to arrive in Rome for the election, but also the inability of the Cardinals to agree. Before the election of Gregory X, in 1271, the Catholic church had been without a supreme pontiff for two years and nine months because no one candidate could garner sufficient support. To encourage the Cardinals to choose a Pope the local authorities had locked them up with poor food; these straightened living conditions had the desired effect. From then on, elections were held in conclave (from the Latin for ‘with keys’ i.e. in a locked place). Today all Cardinals, aged under 80 on the day of the Pope’s death, that may participate in conclave are held incommunicado within the Vatican. They are no longer locked within the Sistine chapel but reside in a set of rooms outside the Vatican. Those Cardinals over 80 are allowed to enter conclave with their voting brethren but may not participate. They gather in the Sistine chapel and swear an oath of secrecy and faith. No communication is allowed between the Cardinals and the outside world, and all people not involved in the conclave are ushered out with a cry of “Extra omens!” “Out, all of you!” 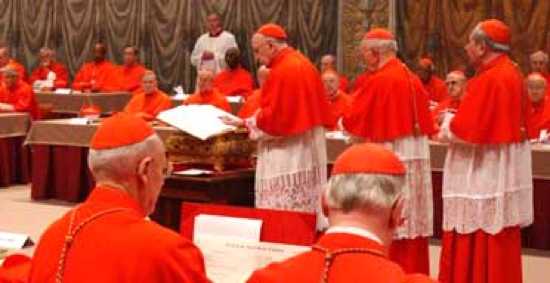 To be elected Pope you must receive two thirds plus one of the possible votes. The Cardinals at each vote are given a slip of paper with the words ‘Eligo in sum mum pontifical’ (I elect as Pontiff) printed on them. Each Cardinal then writes the name of the person he wishes to be Pope, folds the paper twice and carries it aloft to the altar. Here he swears “I call as my witness Christ the Lord who will be my judge, that my vote is given to the one who before God I think should be elected.” He then places the vote in a chalice. Once everyone has voted the votes are tallied by three Scrutineers. Each vote is read aloud, giving the conclave an idea of who the main contenders are, and tied together with string. If no one has a sufficient number of votes the ballots are burned and voting begins again. When this happens black smoke emerges from the chimney to let the world know no Pope has been elected. When a sufficient number of votes are cast for one person white smoke emerges. 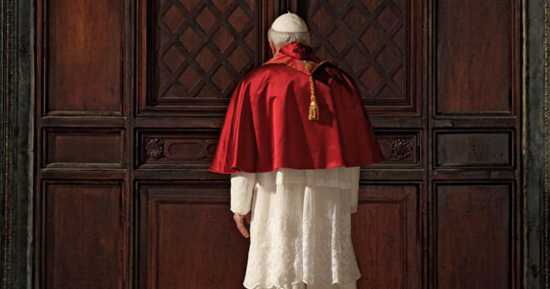 The person who received the required votes is then asked by Dean of the College of Cardinals, or his deputy if the Dean is elected, whether they accept the position of Supreme Pontiff. If they accept, then they become Pope immediately. A person who did not wish to be Pope would usually have made such an announcement before the votes were started. The new Pope is then asked by what name he wishes to be known. The tradition of a Pope taking a new name began with Pope John II, whose given name was Mercurius. It was felt that it would be improper to use the name of a pagan God so he used the name of his processor John. Once the new name is chosen, all of the Cardinals present pledge their allegiance to the new Pope. 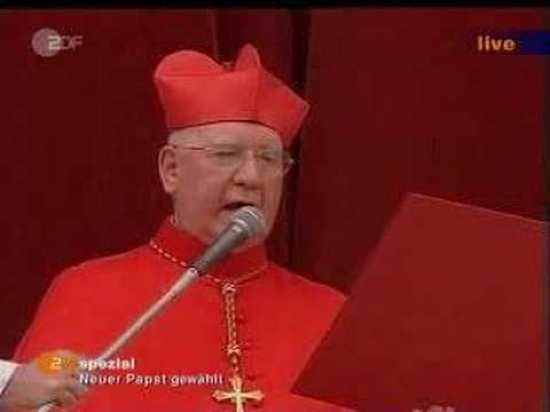 By now, crowds will have gathered in St Peter’s square to see the new Pope, drawn by the white smoke which announces the election. Before the new Pope is shown on the balcony of St Peter’s he must be fitted out with papal vestments. To ensure that the new Pope, whoever he may be, has well-fitting clothing several sets of vestments are made by the papal outfitters suitable for all shapes of pontiff. The new Pope dresses himself in a red room, set off from the Sistine chapel, known as ‘The Room of Tears.’ Once dressed for his new role the Pope is announced to the pilgrims in St Peter’s square with the words “Habemus Papam!” “We have a Pope!”

The new pontiff then steps onto the balcony and delivers his first address to the city and the world (Urbi et Orbi). 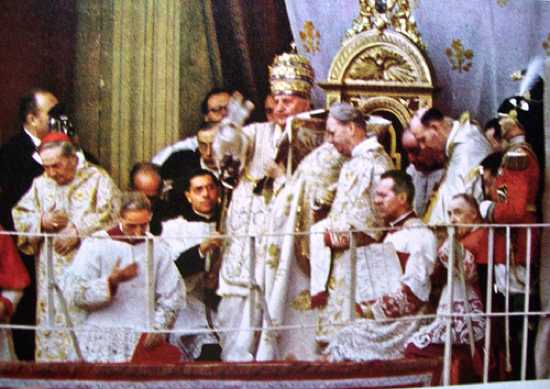 When the Pope was still a significant secular ruler of lands in Italy, it was customary for him to have a magnificent coronation at which he would receive the papal tiara. However, recent Popes have opted for a simpler ceremony. A mass is celebrated and the Pope is given a pallium, a woolen band worn over his shoulders, and the Ring of the Fishermen. The Pope will wear this ring until his own death, when the process of electing another Pope will begin. [Pictured: Pope John XXIII] 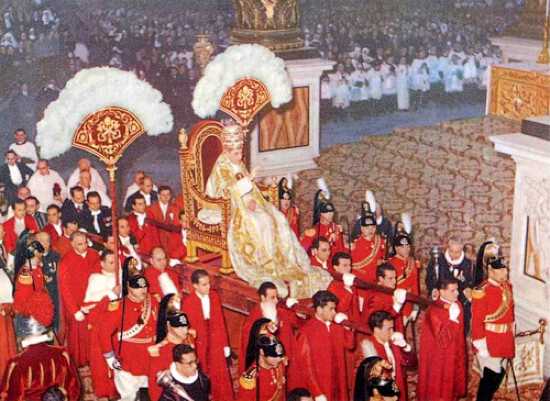 Despite what you may have seen in the recent TV series The Borgias, it is not necessary to check the masculinity of the Pope. It is a commonly held myth that, following election, the Pope-elect would be made to sit in a chair with a hole cut in the seat. There would then be a visual or manual examination of the Pope-elects genitalia. If the examiner was convinced that the new Pope was a man he was supposed to have shouted “Testiculos habit et bene pendents!” “He has testicles, and they hang well!”

Unfortunately there is no good historical evidence that such a ceremony has ever taken place. The necessity of the test seems to rest on the legendary figure of Pope Joan; a woman supposed to have concealed her femininity and climbed the ladder of church power until she became the Pope. Since there is no good evidence for Pope Joan it seems unlikely that there would be need for such an intimate scrutiny. [Pictured: Venerable Pope Pius XII]