The human body is such a complex and interesting series of energy give and take. But what happens when an individual’s health deteriorates and, finally, they come face-to-face with death itself? To understand how the body runs and operates, it is essential to know how the body operates when it’s not, well… operating. What happens when cells no longer divide and ATP (energy carriers in cells) is no longer available? Even the moments up until the final breath give insight into the abnormal functioning of a human body. This list will show you, in rough order, 10 significant changes in the human body that occur peri (during) and post mortem. PLEASE NOTE: some of the entries on this list may be disturbing or upsetting – but care has been taken to ensure that no gruesome images appear. 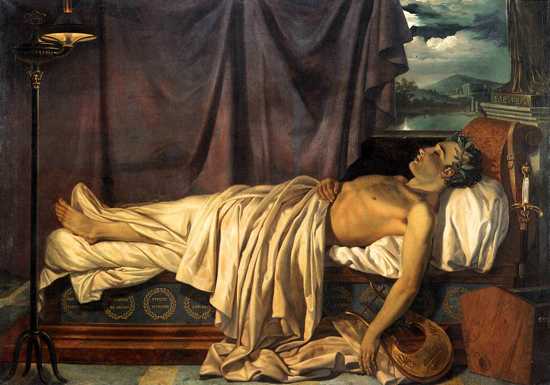 The death rattle is a common term used in the hospital to describe the chilling sound made by an individual very near death. It occurs after loss of the cough reflex and loss of the ability to swallow. This causes an excessive accumulation of saliva in the throat and lungs. Although it rarely causes pain to the patient, family members often find the sound unsettling and disturbing. Anyone who has ever heard the unsettling death rattle will never forget the way it sounded. Suctioning, anti-pain, and anti-anxiety medications are normally administered to alleviate the patient’s discomfort and allow the unavoidable dying process to proceed. [Image: Lord Byron on his Death-bed; Joseph Denis Odevaere]

Learn more about the way the body acts in its final moment with Anatomy of Life and Death at Amazon.com! 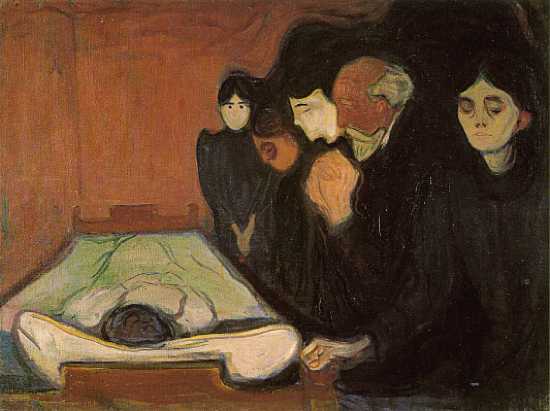 This is a very abnormal breathing pattern characterized by very rapid breathing and then periods of no breathing (apnea). In the short term, the heart is weak and overworked, which makes the body want to hyperventilate (breathe abnormally fast) and, subsequently, there is no more energy to breathe for a period of time (apnea). This means the organs are getting less blood and, thus, less oxygen. Without oxygen, the cells in the organs begin to die, then the organs die, and finally, the individual dies. Although it can also occur in people with heart failure or other respiratory disorders, it is usually present at a time of impending death. [Image: By the Deathbed; Edvard Munch] 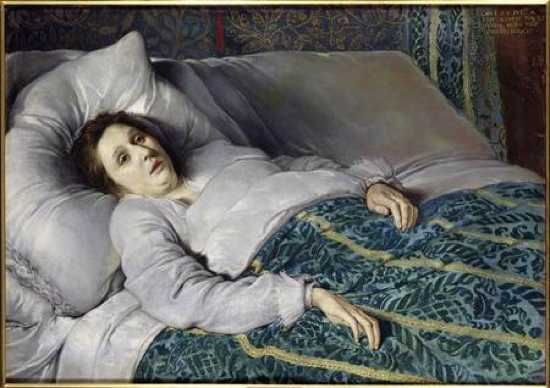 Upon death, every muscle in the human body will cease to receive energy in the form of ATP. As a result, the bowels will relax, and a bowel movement can occur. This is especially true in individuals who have eaten a meal in the period shortly before their time of death. Another factor contributing to post mortem defecation is how quickly an individual’s body normally digests food. It is found more often in the unexpected deaths of otherwise healthy individuals. Patients in hospice centers may not have an appetite for several days before death and, thus, will probably not defecate upon their death beds (no pun intended). [Image: Young woman on her death bed; Anonymous, Flemish School] 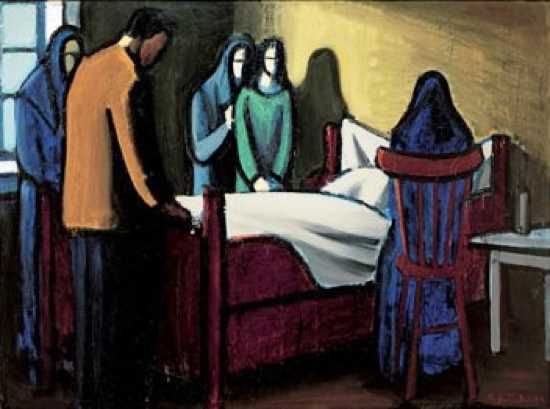 Everyone has either heard of rigor mortis or has found a dead pet with rigor mortis. The most well-known post-mortem occurrence is rigor mortis, or “stiffness of death.” After death, the body cannot break the bond that causes a contraction—causing a perpetual state of contraction. It works in a head-to-toe fashion. In most cases, rigor mortis begins within 1-3 hours after death, and it begins to pass after 24 hours. Even the eyelids get rigor mortis, so if they are not closed shut after death, eye caps (a big round lens with spiky protrusions) are used to get them open. Since it affects all the muscles, it can make the heart appear larger than normal, cause semen to be released post mortem, and can cause a goose bump appearance on the corpse. [Image: At the death bed; Samal Joensen Mikines] 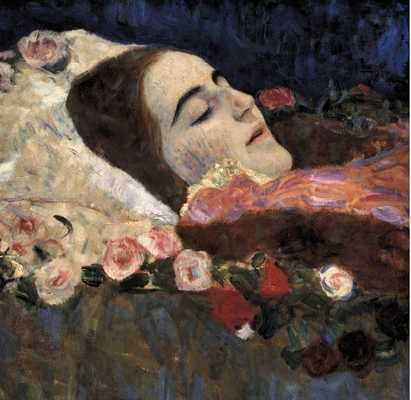 Livor mortis is the purple-red coloration that appears when blood sinks to the dependent portions of the body. However, it does not occur in areas of the body touching the ground or receiving pressure because the capillaries are compressed – this is similar to pressing your finger on your arm for a couple of seconds and observing your fingerprint in white for about three seconds. This concept helps coroners determine the position of death. Its presence or absence can also help coroners to determine an approximate time of death. It generally begins 1-2 hours after death and becomes permanent or “fixed” within 6-12 hours. [Image: Ria Munk on her Deathbed; Gustav Klimt] 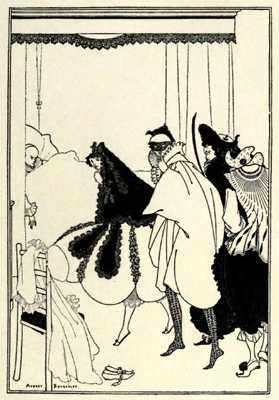 Also known as the “death chill,” it reduces body temperature following death. Cooling takes place only if the ambient temperature is cooler than the body temperature at the time of death. The rate of cooling varies: body location (shade versus sun), clothing, and the temperature of the room they die in. A cold bathroom floor would cause much quicker cooling than found in someone who dies outside in 95-degree weather. Obese people lose heat slower than infants, who cool rather quickly. If the time of death is within 24 hours, then this is a helpful tool. Otherwise, it takes the body about 24 hours to completely cool or become the same temperature as its environment. [Image: Death of Pierrot; Aubrey Beardsley] 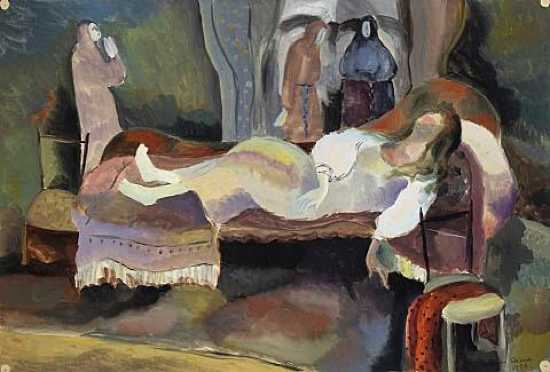 Tache noire, literally meaning “black spot,” is a dark, reddish-brown strip that will form horizontally across the eyeball. During life, the eyeballs are kept moist by blinking, but sometimes they are no longer protected upon death. Therefore, tache noire will occur in individuals whose eyelids are not closed post mortem. Similarly, other mucous membranes like the tongue will darken after prolonged air exposure to the normally moist tissue. If the individual drowned, or the body was found in water, the tache noire would not be present. The eyeballs have to be exposed to air for it to occur. [Image: The Death Bed; Kathleen Walne]

Watch all six seasons of the fan-favorite 1,000 Ways To Die at Amazon.com! 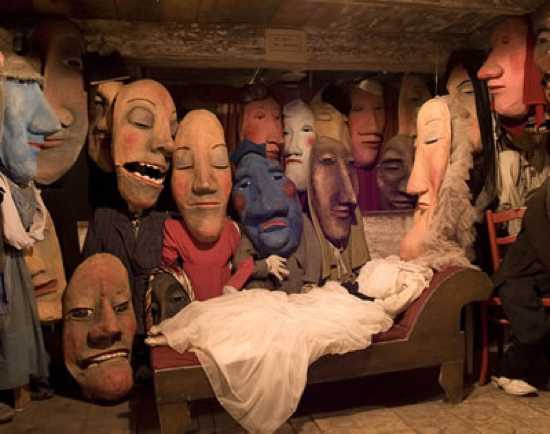 This is a putrid, reddish-brown fluid with a very foul smell emerging from the oral and nasal passages. It is easily mistaken as a brain injury, assault, or just simple blood. It emerges as a result of the gases forming throughout the body. When gas formation occurs in the stomach and intestines, the abdomen can become tense and distended. Subsequently, the increase in abdominal pressure causes a purge of foul, blood-tinged fluid from the mouth, vagina, and nose. A similar feces-mixed fluid will also emerge from the rectum. Purge fluid can be useful in determining the time of death. If an individual dies in a hotter climate, like Texas or Mexico, the purge fluid can be seen in less than 24 hours. [Image: Puppet on his Death Bed] 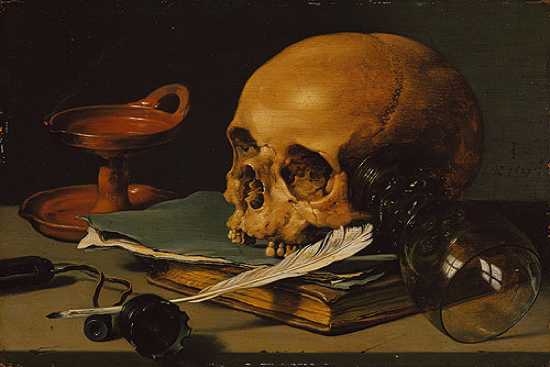 Degloving is the actual removal of the body’s skin post mortem. Most notably, the fingers and nails detach with sheets of the skin thick enough to form “gloves” or “socks,” as some people call them. It occurs due to the gaseous swelling of the neck, trunk, and limbs that become so swollen that one can mistake it for gross obesity. When the putrid gases are under a substantial amount of pressure, they flee from the body, and the entire mass of decaying soft tissues disintegrates. The word “degloving” is an appropriate term because you can actually remove the skin of the hands like you would remove a glove from your own hand. Though, interestingly enough, the underlying skin can still provide a fingerprint for the examiners. [Image: Still Life with a Skull and a Writing Quill; Pieter Claesz] 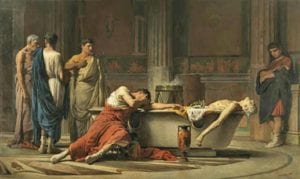 There are two main ways the body decomposes: Autolysis and Putrefaction. Both of these processes take place by a chemical reaction. Autolysis is the process by which digestive enzymes within the body cells break down carbohydrates and proteins. Putrefaction is the predominant cause of tissue degradation and is due to bacterial activity. Putrefaction starts four to ten after death. Most of the appearance of a dead body over time is due to putrefaction: bloating, green discoloration of the abdomen, skin slippage, and loss of hair and nails. Heat speeds up the process, while the cooling of the body can slow putrefaction, and freezing can stop it entirely. The environment and health of the deceased can also affect the speed at which the body decays. In forensics, the degree of putrefaction allows investigators to roughly estimate the time of death based on a specific timeline of these occurrences after death. [Image: Death of Seneca; Manuel Domínguez Sánchez]