In the first volume of this list, we covered the top ten awe-inspiring waterfalls. The objective was to present the top 10 showcases of falling water; the ideal large gushing falls which one tends to picture in their mind at the thought of the word “waterfall.” The original ten includes some of the most popular and recognizable waterfalls in this world. When you get past those, it becomes increasingly difficult to find waterfalls with the large enough width, height and water flow to be specified in the awe-inspiring category. However, after some relentless digging, here are 10 more waterfalls which look genuinely monstrous and also carry the right aesthetic appearance. I wonder if there will be a part three to this awe-inspiring waterfalls series because huge stellar waterfalls are running low. 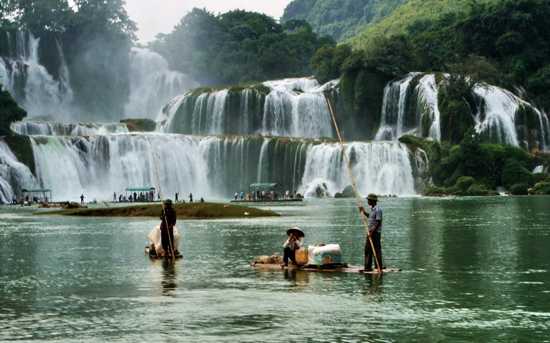 Big wholesome waterfalls serve as great separation landmarks in forming borders between countries, think Iguazu between Argentina and Brazil, Victoria between Zambia and Zimbabwe, and Niagara between USA and Canada; all three waterfalls covered in the first edition of this list. Detian Falls is not as big as those massive cataracts, but this splendid waterfall is impressive enough to crack open a place for itself in this list. It forms a part of the border between China and Vietnam. It falls 50m down in three steps, which somewhat mucks its holistic potential, but Detian Falls also comes with an 80m width which greatly enhances the whole spectacle. It’s located on the Guising River between the provinces of the two nations respectively, and it probably has the lushest surroundings of any waterfall in this list, a common scenic feature surrounding cascades in that region. It must be quite an experience to stand back at the midst of lime-green rice paddy fields of Vietnam, and then glance up and witness the contrast of the whitish blue plunging water. 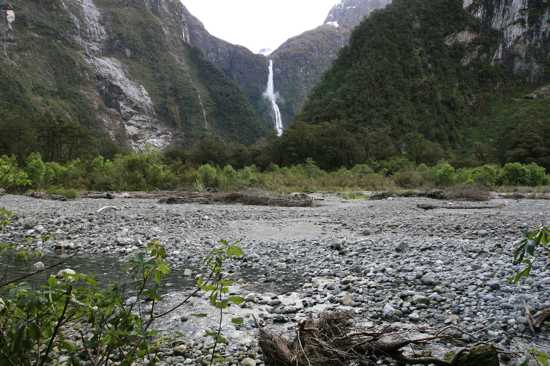 The beautiful fiords of New Zealand have been featured before in this site, but as gorgeous as the fiords are, the water is not limited to the inlets. Just south of Milford Sound lies Sutherland, arguably New Zealand’s most famous waterfall. Usually tall cascades don’t provide a good representation of what a powerful waterfall should look like. There are exceptions of course, and the first edition featured a couple. So, keeping up with that tradition, the Sutherland Falls is an unbelievably tall waterfall at 580m, and is thankfully not too narrow, nor imperfectly vertical as with non-plunge falls; both common faults with tall waterfalls. Also the water flow certainly isn’t weak and being reduced to a trickle as is the case with some of tallest waterfalls of the world. The thundering Sutherland Falls reminds us how height can be such a plus with enough water flow. Tourists say that the noise is more deafening than some of that of the other more popular falls they have been too. Now, that is power. 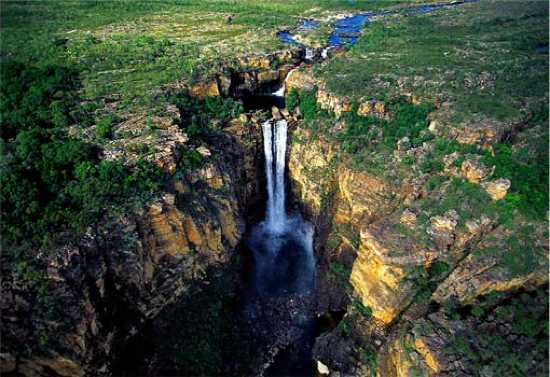 With Jim Jim falls, we slowly venture into that territory of the classic rectangular waterfall with a robust sheet of water falling in one single plunge. That, to me, is the perfect kind of falls, and I try to promote that in the previous edition as well as this one. Jim Jim Falls suits this purpose very well as it plunges 150m down from the straight cliffs at Kakadu National Park, located in Australia’s Northern Territory. It is seen best during the wet season, which runs from December to March in the southern hemisphere. So, with the desired copious amount of rain, the falls emerge straight out of the upper plateau with fantastic force. Sadly, in the dry season the water ceases to flow completely, but this makes for a remarkable transformation as the seasons change, and Jim Jim Falls delivers a very aqueous outcome. 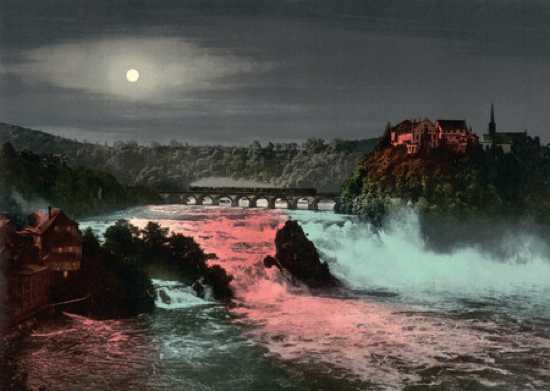 Rhine Falls presents itself as one big blur of rushing water. It takes some time for the eye to make out where the waterfall starts and ends as the deluge of water just camouflages with river Rhine, and there is no visible terrain present at the top as the sheer volume of the water covers it all. It is a lowly 23m tall, but boasts a large width of 150m, and together with the enormity of its water flow, Rhine Falls seizes the no.7 spot. In fact it always makes high appearances on waterfall charts ranking flow rates. And due to the fact that it doesn’t carry any rapids and is large enough to have a distinctive appearance, it can be easily counted as one of the elite pure waterfalls. There are also a few viewing platforms which let you observe the falls from up close, adding to the feverish excitement. 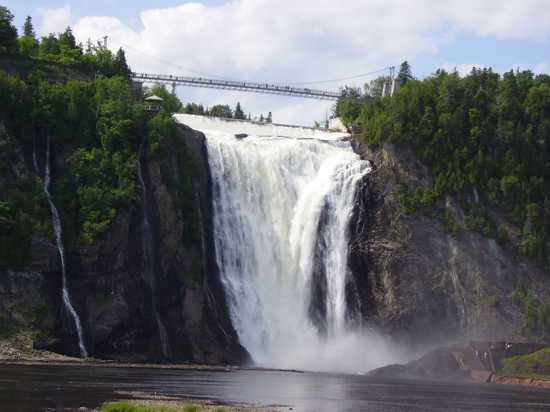 USA and Canada have many things in common. One of them is that both nations are hosts to fantastic waterfalls. Montmorency Falls can be argued to be Canada’s best waterfall, after Niagara, with its awesome dimensions of 275 feet in height and 150 feet in width. It certainly accounts for a grandiose display of falling water on the Montmorency River, in Quebec. Fortunately or unfortunately, as per one’s own taste, they have made the falls easier to access by making a park around it, complete with facilities to make the viewing easier. These include a footbridge across the falls and a cable car to transport you up and down the cascading waters. This tourist-friendly approach might detract some visitors preferring the thrill of a nearly inaccessible beauty left alone and hidden in its remote location, but then again, the number of possible views from varied angles would be limited without the constructions. Either way, Montmorency Falls is sheer greatness. 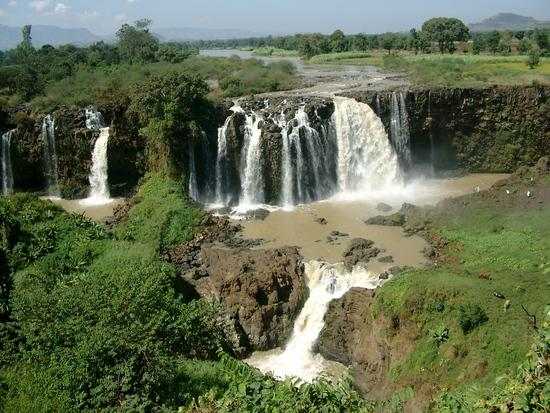 Normally, when asked about Ethiopia you might shout out in name of its famous coffee bean varieties, but you know it is a safe bet to bank on a state’s natural wonders if that country happens to be on the Dark Continent. The Ethiopian Tis Issat Falls is also known as the Blue Nile Falls and it is an example of the power of the river Nile, which happens to be the longest river in planet Earth. Due to the building of a hydroelectric dam, the water flow really dries up during the dry seasons providing only a meek sight – a fairly common phenomenon around the world where dams are built. But come rainy season, the water really barrages down and can transform to a 400m wide, full blown waterfall. The height of the Falls ranges from 37 to 45m and there are some wedges of terrain breaking the sheet of falling water. But despite that, Tis Issat continues to amaze, fully deserving an entry at no.5. 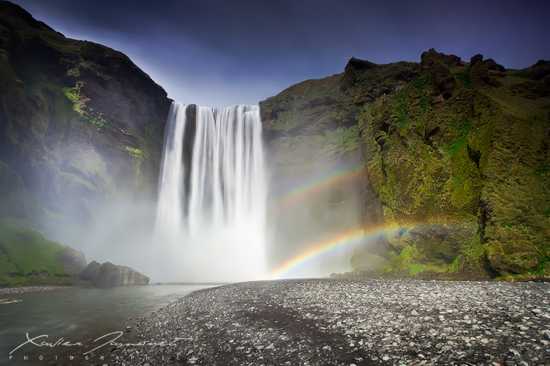 Iceland had been established as a minefield for big staggering waterfalls in the previous edition, a list which featured two waterfalls from the Nordic nation. So I can’t believe that Skogafoss Falls got away the first time, as it merits the same attention given to its other two counterparts. It is probably the smoothest waterfall in this list, as the water falls down immaculately in a perfectly edged out rectangle of dimensions of 25m width and 60m height. There are no rocks or ridges in between to separate the flow or result in sprouting different water flows which ultimately are close enough to mix and give the illusion of one single large plunge. While this is the usual case for some of the biggest falls out there, it isn’t for Skogafoss as there is one large sheet of streamlined descent of water, giving the waterfall a very potent appearance. With Skogafoss included, the Icelandic big three are now officially covered. 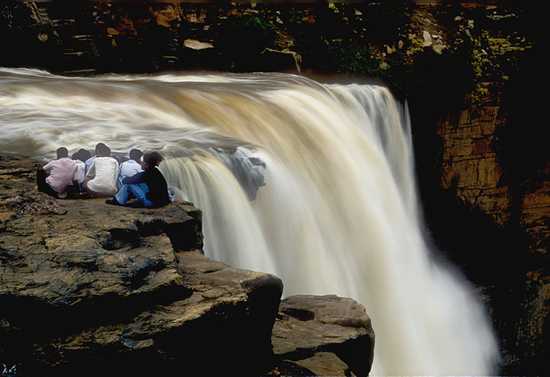 Continuing another trend from the previous list, India’s state of Karnataka seems to have churned out yet another ravishing waterfall, and there were many more strong candidates from that region when doing the research. Undoubtedly, Karnataka is South Asia’s best waterfall province with its multitude of waterfalls, and it gives us Gokak Falls at no.3. Now we really kick into beast mode, with the water barraging down from gorges and creating tremendous amounts of mist below. The water of Gokak is of a brownish color which sets it apart from other large waterfalls, and it definitely has the proportions which command respect – a height of 50m, but more importantly a width of 177m. The construction of a hydroelectric dam has curbed the water flow to some extent, but come monsoon season this fearsome waterfall hits top gear. 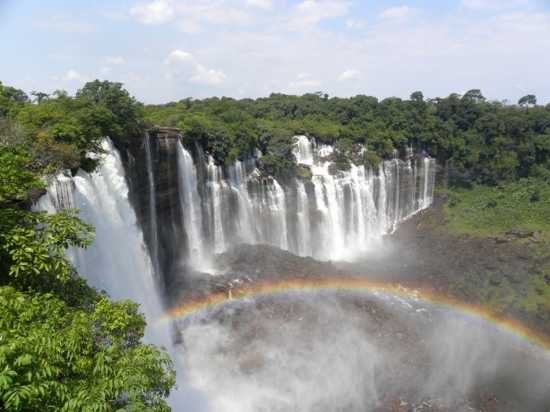 When it comes to Kalandula Falls, stats speak for themselves. It is 104m tall and can be 400 to 600m wide depending on the water flow. This Angolan treasure can look similar in appearance to the Tis Issat Falls with its flow consisting of long stringy plunges coming together to form a creditable sheet of cascading water, revealing brown ridges in between. But it’s over twice the height of Tis Issat, and thus, naturally, makes an appearance in this list. It is, by far, Africa’s second biggest waterfall after Victoria Falls, not counting the many rapid containing falls across the river Congo, which should not be technically classified as waterfalls, as they look nothing like them. It’s a funny thought that nature goes uninterrupted in spite of all man-made conflicts. The former Portuguese colony took a long time to pull out of a civil war after its independence and is recently working on developing its tourism industry. Kalandula Falls will definitely boost this effort. 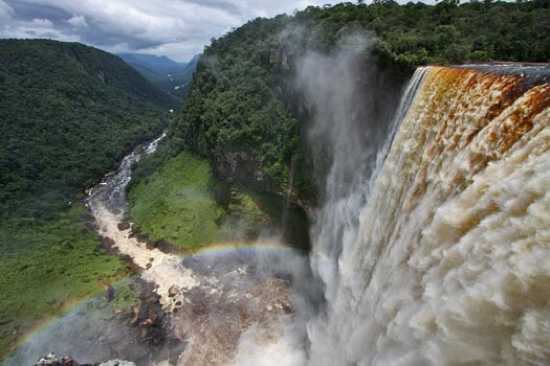 Kaieteur Falls was the reason for writing 10 More Awe-inspiring Waterfalls. This was the one cascade closest to making the cut in the first edition, and so I justify its previous exclusion by rewarding it the no.1 spot in this list. Located in Guyana, Kaieteur Falls is blessed with the measurements of 221m in height and nearly 100m in width. Its flow is as planate as you can get without any breaks, it produces more than generous amounts of mist, and no other waterfall at over 200m is as voluminous as Kaieteur Falls. Altogether, it is one of the best exemplary waterfalls out there. The top three waterfalls in the previous edition are dwarfed in height by this wonder, and it still manages to have an extraordinarily heavy water flow. In the previous edition, we showed that Iguazu Falls had Niagara Falls beat in all fairness. Kaieteur Falls similarly has got the features to hog your attention, and it should be mentioned more often when speaking of the world’s most awe-inspiring waterfalls.