Elephants are a huge part of popular culture and show up as metaphors across all media. They form a part of religious beliefs and are often associated with wisdom or altruism. However, many people who live outside the normal range of elephants are unfamiliar with the many interesting facts about them. This list gives an overview of ten interesting areas about elephants. 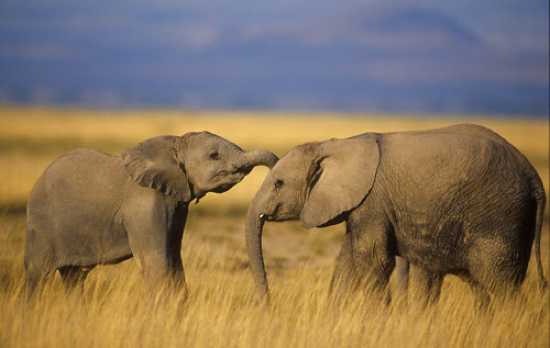 In English, when we say ‘elephant,’ we are actually referring to several different species. Until 2010, only 2 species of elephant were scientifically recognized. However, genetic testing has revealed that there are at least 3 species. These are the Asian elephant alphas maximus, the African bush elephant loxodonta Africana (also called the savannah elephant), and the African forest elephant loxodonta cyclones. The Asian elephant is the smallest, and has small ears and tusks. They have two prominent bumps on their foreheads. They hold their heads more erect than both African elephants, have no protruding upper lip, and have a single short finger-like lip at the end of their trunk which they use for fine manipulation of objects. Both African elephants have larger ears, although the forest elephant has much rounder ears, are less hairy, have larger tusks, rounded foreheads, and have two finger-like lips on their trunks. The forest elephant has relatively straight, downward-pointing tusks whilst the bush elephant has magnificently curved ones. Most elephants are crepuscular, meaning that they are most active during dawn and evening, although this varies due to local climate. Unfortunately, all elephant species are endangered. 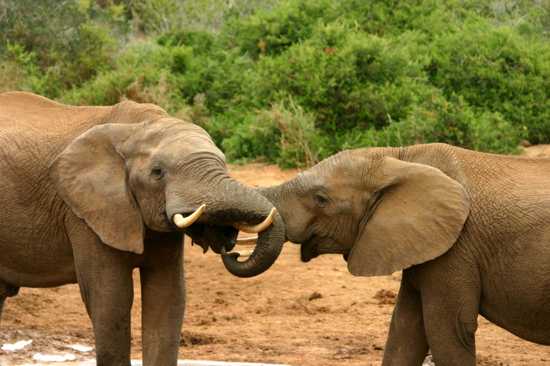 Homosexual elephants, which are well-documented, mate year-round, but an elephant cow (female) is fertile for only a few days each year. During this time, bulls (males) will try to court her by using rituals involving various affectionate gestures and nuzzles. If she accepts one, she will respond with similar gestures and after 20 minutes or so of a courting ritual they will mate. If she conceives, she will be pregnant for 22 months, longer than any other land animal. Some elephants induce labour by self-medicating with certain plants. The calf (baby), when born, weighs over 100kg. Elephants are quadrupeds, so unlike humans, they can have relatively much wider pelvises which gives them lower infant and mother mortality rates and birth complications than in humans. Baby elephants are initially blind and some take to sucking their trunk for comfort in the same way that humans suck their thumbs. Infants have few survival instincts and are instead taught by their mothers and the more experienced members of their herds. The mother will selectively appoint several babysitters to care for the baby so that she has time to eat enough to produce sufficient milk for it. 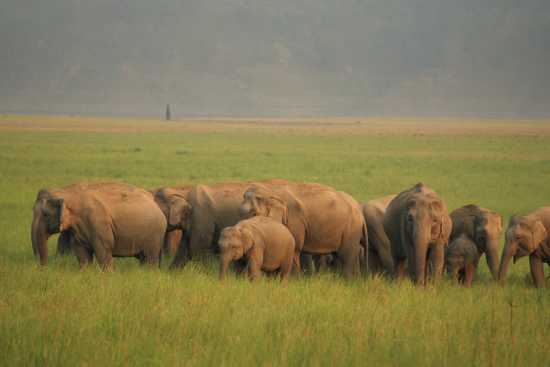 Female elephants live in a herd of about 10 individuals lead by the most experienced matriarch, whereas the males are normally solitary and move from herd to herd. The females in each herd help each other find food and care for calves. They do not lie down to sleep because of the excellent support their very straight legs give them. Elephants communicate within their herds or between herds many kilometers away mostly using sounds too low for human ears to perceive and by stamping their feet. Within their herds, elephants are believed to have the same or similar levels of cooperation as chimpanzees. An elephant herd is considered one of the most closely-knit societies of any animal, and a female will only leave it if she dies or is captured by humans. Males will leave the herd as they become adolescent, around the age of 12, and live in temporary ‘bachelor herds’ until they are mature and live alone. 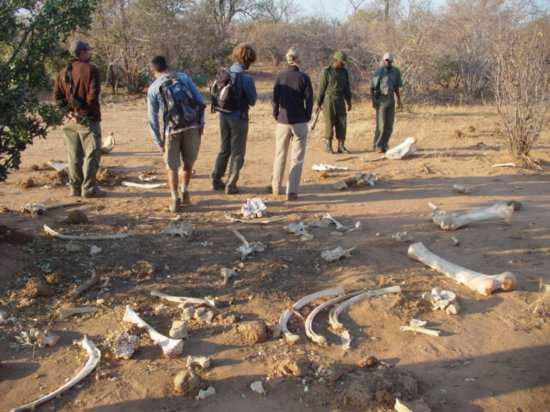 Elephant graveyards are not supported by any hard evidence, but death is important to them nonetheless. Their normal lifespan is 60-80 years. Elephants, humans, and Neanderthals are the only animals known to have death rituals. If an elephant becomes sick, herd members will bring it food and help support it as it stands. If it dies, they will try to revive it with food and water for a while. Once it is clear that an elephant is dead, the herd will become very quiet. They often dig a shallow grave and cover the deceased elephant with dirt and branches, and will stay at the grave for days afterwards. If the elephant had a particularly close relationship with its deceased peer, it can show signs of depression. Even herds that come across an unknown lone elephant who has died will show it similar respects. There are also reported cases of elephants burying dead humans they have found in this way. 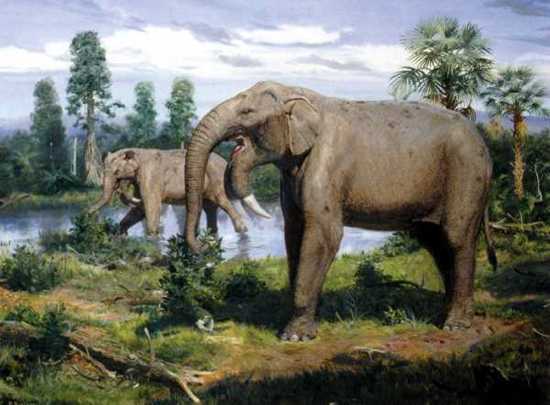 The elephant taxonomic order, proboscidea, has only 3 members today, but it used to have over forty. Most of these thrived until the end of the last glacial period 12500 years ago. These creatures were generally similar in size to modern Asian elephants, although there were tiny dwarf elephants and the humongous deinotherium, 4.5m tall and weighing 14 tones. For comparison, the largest African bush elephant recorded was 4m tall and weighed 12 tones. Within proboscidea, the mastodon family mammutidae contains modern elephants and the very famous mammoths. Mammoths had long curved tusks and were much hairier than even modern Asian elephants. The last mammoth to go extinct was the woolly mammoth, whose numbers had dwindled as the climate warmed and was finally hunted to extinction in Europe, Asia, and the Americas 12000 years ago, although some populations isolated from humans persisted until as recently as 4000 years ago. 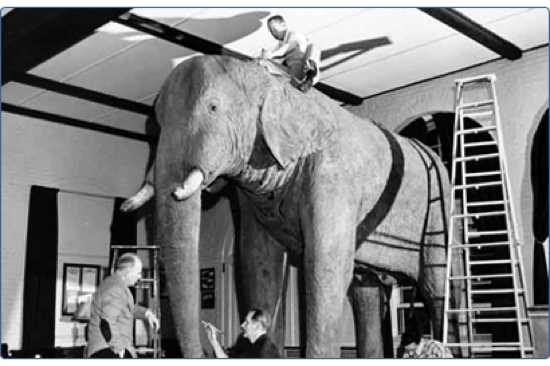 There have been many famous individual elephants in the world, but one of the largest was Jumbo, whose name is now used to mean ‘huge.’ His name is thought to be derived from the Swahili word for ‘boss’ or ‘chief.’ He was an African bush elephant born in 1861 and taken to a French zoo as an infant. He was later transferred to a British zoo where he gave children rides on his back and was greatly admired. Jumbo’s caretaker even gave him an occasional gallon of whisky which he believed was good for Jumbo’s health. Eventually Jumbo was sold and exported to the USA, and such was his popularity that one hundred thousand children wrote to the Queen asking her to keep Jumbo for them. In the USA he achieved his full fame and was widely exhibited until his death at the age of 24. His health had been steadily declining for years, and when he was hit by a train going at full speed he could not recover, dying soon after. Jumbo was 4m tall at the time of his death. 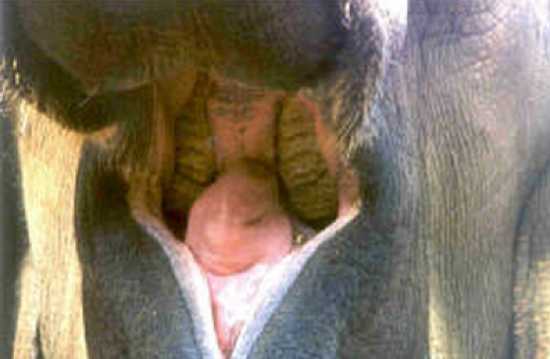 Humans are born toothless, grow a set of milk teeth, and finally lose these as they grow permanent adult teeth. Similarly, elephants are born without tusks, grow milk tusks, and replace these with adult tusks. In Asian elephants, females are usually tusk less. Elephants use tusks for digging and lifting heavy objects, and sometimes as a part of mating rituals. Although now illegal, there is heavy poaching of elephants for their tusk ivory. This is believed to be why the average size of elephant tusks is gradually decreasing – elephants with smaller tusks are not poached and live to reproduce more. Elephants normally only sleep 2 or 3 hours each day because they need to spend time eating to support their huge size, as they can eat up to 150kg of vegetation every day. Due to their herbivorous diet, elephant teeth wear out quickly and they have 6 or 7 sets instead of only 2 like humans. New teeth grow in the back of the mouth and move forward to replace old worn sets. After the last set has been worn out, solitary elephants will usually die of starvation whereas herd elephants will help feed starving members of their group. 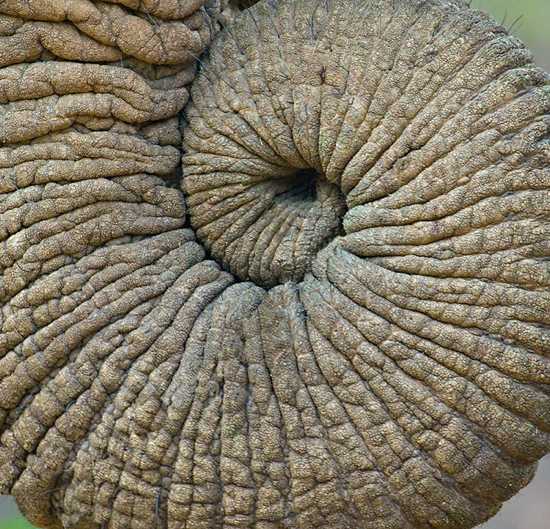 The elephant trunk, a specialized nose, is analogous to an octopus tentacle in terms of dexterity. It allows them a high degree of manipulation of objects and elephants are adept tool-users. Elephants have been taught to paint with their adroit trunks and produce some fascinating artwork. In captivity, elephants easily learn how to open simple locks and many master more complex ones, something impossible for most other animals due to a lack of dexterity and intellect. Elephants in zoos have worked together to take advantage of this, by having many act as lookouts as another undoes the lock, or in one instance an elephant feigned injury as a distraction while another elephant helped the others escape. Once all the elephants were out, the distraction elephant climbed to its feet and ran for the door, surprising its tenders who had been unaware of the ruse. 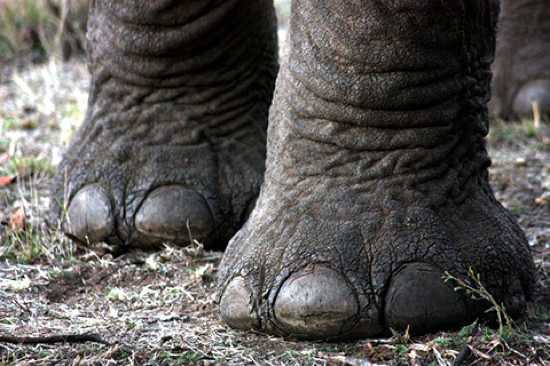 Each elephant foot has 5 toes, but not every toe has a nail. An easy way to tell the two African elephant species apart is by counting toenails. The African forest elephant and the Asian elephant both have 5 toenails on the front feet and 4 on the back feet. The larger African bush elephant has 4 or sometimes 5 on the front feet and 3 on the back. An X-ray of an elephant’s foot will reveal that its bones are actually standing on tip-toe. Their feet are flat because of a large pad of gristle under each heel which acts as a shock absorber and helps them walk quietly. Their legs are much straighter than those of other animals and support their weight so well that elephants sleep while standing. Elephants spend most of their lives walking huge distances, and their feet are suitably adapted to such a lifestyle. Zoos which keep elephants often find they develop foot problems due to a lack of constant walking, and treatments include tailored shoes to protect their softened feet. 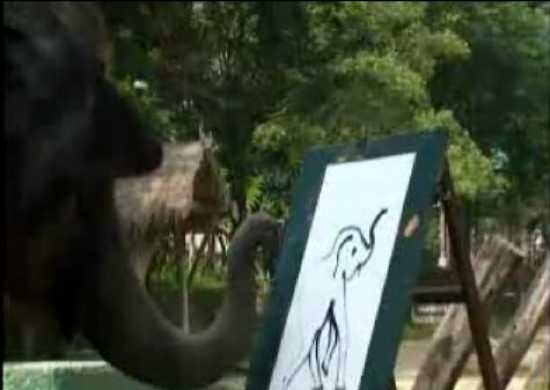 Elephants are some of the most intelligent animals on Earth. Their brains weigh 5kg, much more than the brain of any other land animal. Their brains have more complex folds than all animals except whales, which is thought to be a major factor in their intellect. They commonly show grief, humor, compassion, cooperation, self-awareness, tool-use, playfulness, and excellent learning abilities. An elephant in Korea surprised its zoo keepers by independently learning to mimic the commands they gave it by verbalizing on the end of its trunk, successfully learning 8 words and their context. Elephants have a more developed hippocampus, a brain region responsible for emotion and spatial awareness, than any other animal, and studies indicate that they are superior to humans in keeping track of multiple objects in 3D space. There are many reports of elephants showing altruism towards other species, such as rescuing trapped dogs at considerable cost to themselves. As mentioned above, they respect their dead and have death rituals. There are stories of the herds of elephants killed by humans retrieving the poached bones and returning them to the place of death to bury them.