When faced with the question of how many languages there are currently spoken in the world, most people will guess a mere few hundred, maybe up to a thousand. However, the Ethnologue lists nearly 7,000 languages (although this number is flexible due to the often difficult task of differentiating between a language and a dialect – it is not often clear where the line is drawn. Furthermore, a language becomes extinct approximately every two weeks). Here are 10 languages that are (or were) significant in some way that are not very well-known by the general public. 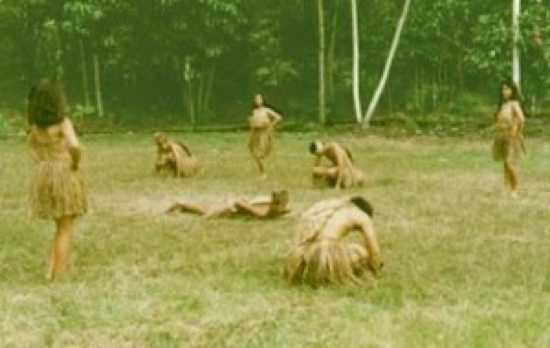 Chamicuro is such a rare language that it has only eight native speakers living today! It is an official language in Peru (where the remaining Chamicuro people – who number between 10 and 20) live. The only speakers of the language are adults and their children speak only Spanish. Despite this, there is a dictionary for the language. At this point in time there is little hope that the language will survive into the future. 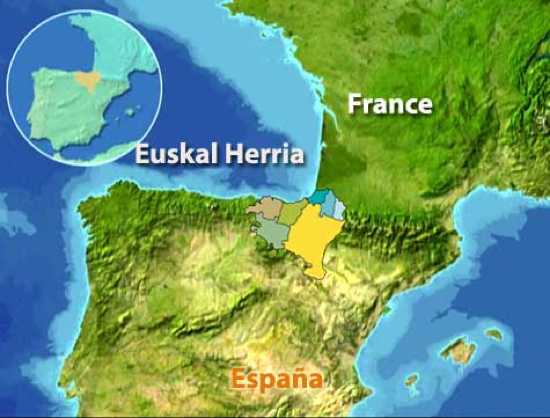 Spoken along the border of France and Spain by over 600,000 people, Basque is puzzling to linguists because it is a language isolate (that is, it appears to have no living relatives) surrounded by Indo-European (IE) languages. Some conclude that it is the last surviving language of a nearly extinct language family that was native to the area before the Indo-European languages were transported there. The language’s writing system is Latin based. 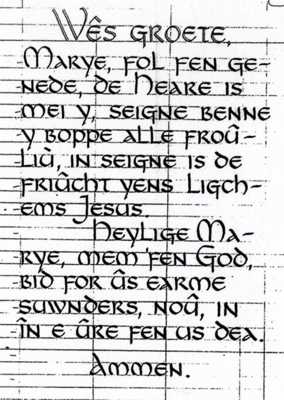 I challenge you to ask people which language they think is most closely related to English. The answers will probably vary by region, with many Americans probably suggesting Spanish since it is the second language of the U.S. with obvious similarities to English. Others may say German, since English is, after all, part of the Germanic branch of the Indo-European family. What you wouldn’t expect is someone to say “Frisian” for the main reason that not many people in English-speaking countries know about its existence. But it is in fact the closest living relative of the English language (unless you count Scots, which many do, but many consider it to be a dialect of English). Frisian and English are both West Germanic languages (as are Yiddish and standard German).

Speakers of Frisian are in fact Dutch people living in the Netherlands and Germany. While mutually unintelligible, samples of Frisian text will show the reader that they do indeed look/sound very similar, such as in the phrase “Brea, bûter en griene tsiis is goes Ingelsk en goes Frysk” (in English, “Rye bread, butter and green cheese is good English and good Fries”).

The Miao people are an ethnic minority group in China, and in fact speak a variety of languages which are known to the Miao people as Miao but are also called the Hmongic languages. The Hmongic languages are of the Hmongic branch of the Hmong-Mien language family. These languages are completely unrelated to other Chinese languages such as Cantonese and Mandarin. Perhaps the most intriguing aspect of the language is the writing systems used. Traditionally orthographically represented by different renderings of the Chinese writing system, the Pollard script (pictured) was fabricated specifically for the Miao languages, which was loosely based on the Latin alphabet. Today, most Miao speakers write using the standard Latin alphabet. 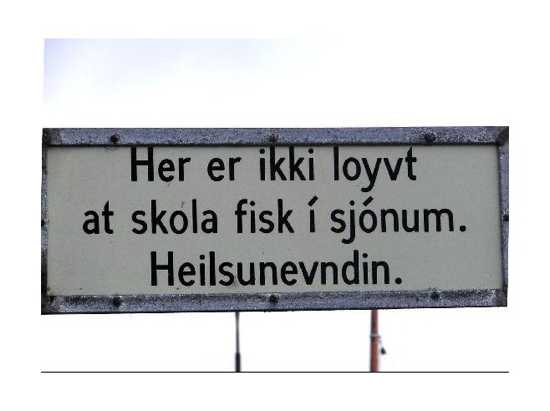 Spoken Icelandic and Faroese are not mutually intelligible but are very similar, yet Faroese gets the short end of the stick because it only has some 45,000 speakers (compared with the 230,000+ speakers of Icelandic). Both languages are well known for being very conservative and it is often stated that speakers of the two languages can easily read Old Norse documents. 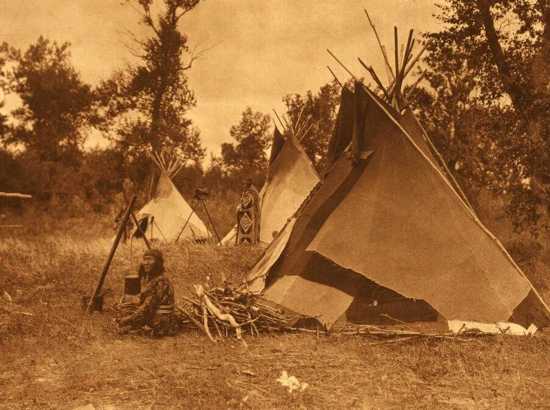 Sarsi only has 50 speakers left according to the Ethnologue, which means it will die out soon. Most speakers are old and very few children are acquiring it as their first language. No writing system is mentioned on either the Ethnologue or Wikipedia page for the language, which is consistent with the fact that Aboriginal culture and history is transmitted orally and not written down. 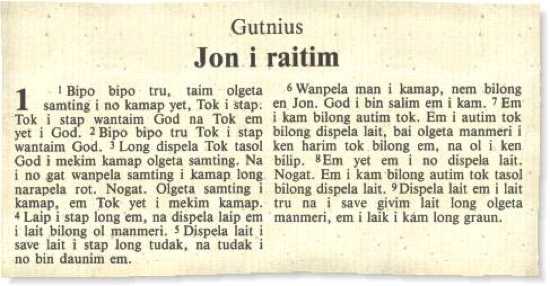 Despite its small size, the islands that make up Papua New Guinea are very dense linguistically speaking, with over 800 languages being spoken and making it the most linguistically diverse place in the world. Of these languages, only three are recognized as official state languages with Tok Pisin, an English-based creole, being one of them. With phrases such as “gras bilong few” (grass belonging to the face, or “beard”) it sounds almost childish to English speakers, yet it is spoken by most of the people, including those that speak the other minority languages.

One particularly interesting aspect of the language is the diverse set of personal pronouns. Although the creole is based on English, it has a more complex set of personal pronouns. While English only differentiates between 1st, 2nd and 3rd person in either the singular or the plural, Tok Pisin has the categories of 1st person exclusive, 1st person inclusive, 2nd, and 3rd person, which can in turn be expressed as singular, dual, trial, or plural. 1st person exclusive dual is “mitupela” (that person and I), 1st person inclusive trial is “yumitripela” (both of you and I), 2nd person singular “yu” (you), 3rd person plural “ol” (those four, five, etc.), and so on.

This may be an exception to the title of this list, since everyone is familiar with he word gothic. But most people are familiar with the word when it is referring to a style of dress or architecture. The Gothic language was one of the languages of the East Germanic branch of the Indo-European family. Not only is the Gothic language now extinct, but the whole East Germanic branch itself as well (which also included the exotic sounding languages Burgundian and Vandalic). Gothic had its own writing system which looks like a combination of Greek and Latin letters. It is the earliest Germanic language which has enough written records in order to be accurately attested, with the Bible being translated into the language in the 6th century. 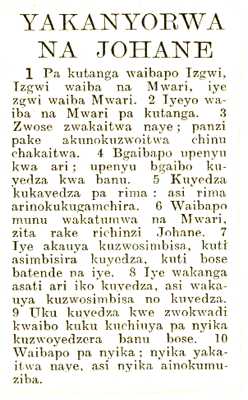 The Niger-Congo language family contains more languages than any other family with approximately 1,500. The bulk of these languages are concentrated in the Volta-Congo branch, about half of which belong to the Narrow Bantu branch. Such a large number of languages concentrated in such a small area has led many linguists to believe that this is where human language originated, as much time would have allowed the languages to spread out and change in isolated pockets in the area.

Most people have heard of Swahili, which is the language with the greatest number of speakers in the Narrow Bantu branch (and indeed the most widely-spoken language in the whole Niger-Congo family) but most speakers of Swahili speak it as a second language. Fewer people are aware of the Narrow Bantu language which has the most number of native speakers, Shona, with over 11 million native speakers. 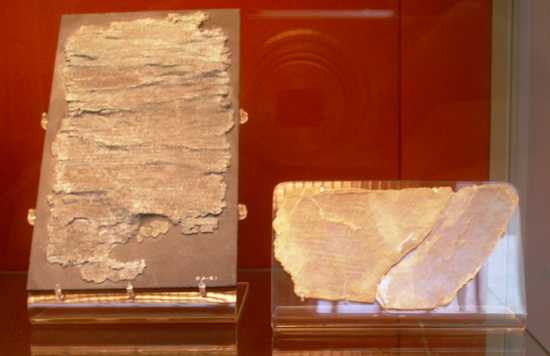 I am not writing of the variety of English spoken by people living in Great Britain, but rather the Celtic language spoken by the Brythonic people, those that lived in Great Britain before the arrival of the Anglo-Saxons. After the arrival of the aforementioned peoples, the British language began to fragment into the languages of Welsh, Cornish, Breton and Cumbric. A sample sentence is “Adixoui Deuina Deieda Andagin Uindiorix cuamenai” which means “May I, Windiorix for/at Cuamena defeat the worthless woman, oh divine Deieda.”