Organizations are often a way for like-minded individuals to get together and discuss the topics which interest them. They may also begin with loftier goals, and they may even work toward them to the benefit of others. Or these groups may end up as little more than social clubs for their members.

Sometimes, these societies take on negative connotations, with nefarious plans to influence worldwide politics being a common accusation leveled against them. Other times, they’re just a way to engage in some fun-filled activities. Here are ten odd organizations of which you’ve probably never heard. 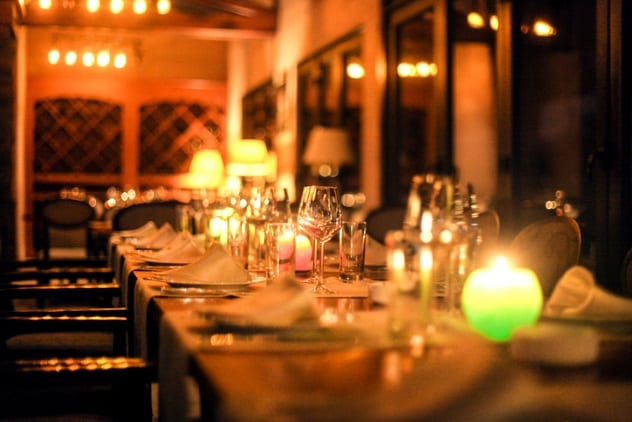 Founded by four men at the Willard Hotel in Washington, DC, the Alfalfa Club derives its name from the plant. To be more specific, the name comes from the plant’s roots, since they “will allegedly do anything for a drink.”[1] In addition, a possibly apocryphal story tells that it was created in 1913 to celebrate Robert E. Lee’s birthday. A society made up of only super-wealthy or super-influential people, it boasts around 200 members, with vacancies only opening up when a current member dies. New members must be invited.

As for what they actually do, it seems they exist solely to throw an annual banquet dinner on the last Saturday of January. The president of the United States is traditionally invited to give a speech, with some of them coming more than once. In 2009, at his first invite, President Barack Obama said the following: “This dinner began almost 100 years ago as a way to celebrate the birthday of General Robert E. Lee. If he were here with us tonight, the General would be 202 years old. And very confused.”

For the first 80 or so years, the Alfalfa Club refused to admit women into the ranks, a decision which was changed in 1994, after President Bill Clinton boycotted in protest. 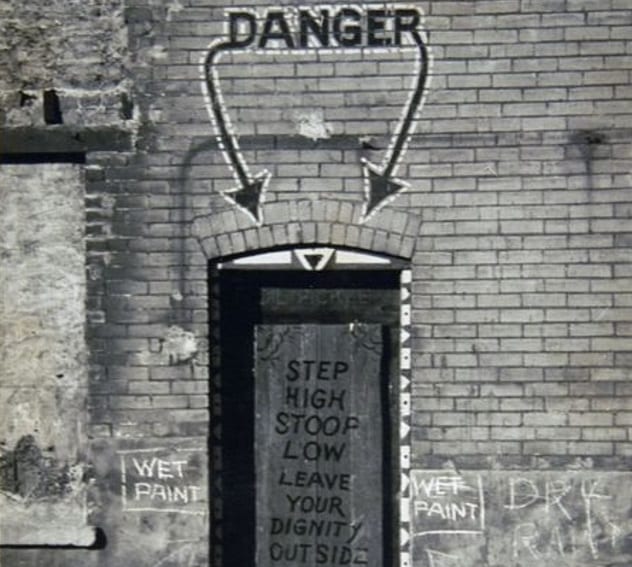 Though it has since disbanded, the Dill Pickle Club was formed in 1914 and was the brainchild of a man named Archibald “Jack” Jones. Jones was a Canadian organizer for the Industrial Workers of the World, a union dedicated to protecting workers. After leaving the group because of an argument over their tactics, he decided to start a society for people to discuss labor and societal issues.[2]

Some of the most famous figures in Chicago’s history were patrons, including Upton Sinclair and Clarence Darrow. Once Prohibition began, it also became a speakeasy, increasingly popular with younger people, especially those in college. Performance, whether artistic or musical, only added to the appeal of the Dill Pickle Club. However, by the early 1930s, Jones decided to no longer pay protection money to the mob, and the group was subsequently shut down by the police.

The spirit of the group can be summed up by its entrance signage: the word “Danger” and, written on the door, “Step High, Stoop Low, Leave Your Dignity Outside.” 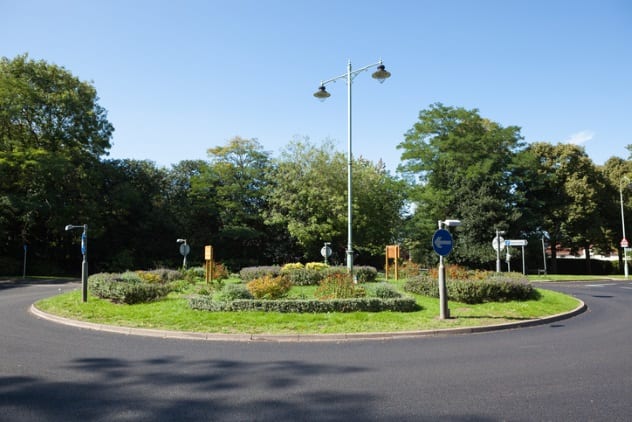 A relatively obscure British organization, the UK Roundabout Appreciation Society (UKRAS) does exactly what it says on the tin: They are a society which appreciates roundabouts.[3] Operating under the belief that nothing but straight roads leads to unsightly boredom, they propose installing roundabouts wherever possible, as well as using the land in the middle of the roundabout to place a piece of art, a monument, or even a windmill. In fact, a roundabout with a working windmill was named the best in Britain by UKRAS.

Founded by Kevin Beresford, after the success of a calendar called “Best of British Roundabouts” he printed in 2003, the group goes out of their way to photograph the most interesting roundabouts they find. Fun fact: Beresford’s nickname is “Lord of the Rings.” 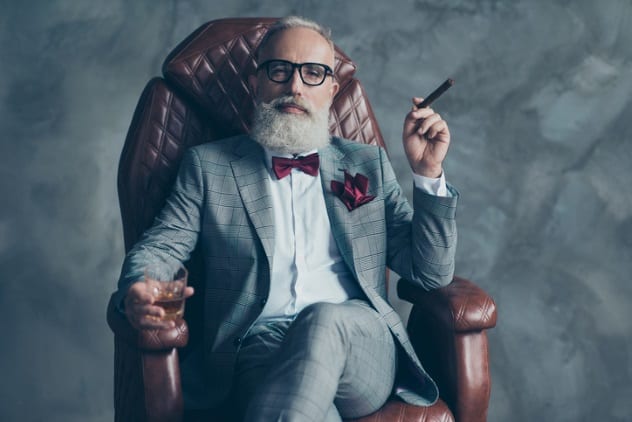 In 1943, American scientist and writer John D. Clark got married to an opera singer. Unfortunately, his friends, chief among them writer Fletcher Pratt, disliked her; Pratt’s disdain for the new Mrs. Clark was so bad that he started a male-only club in order to hang out with Mr. Clark alone.[4] Thus, the Trap Door Spiders were born. They derived their name from the actions of the trapdoor spider, which pulls a door closed whenever it enters its burrow in order to keep its enemies out. (The chief enemy was Mrs. Clark.)

The original group was about 20 members, all male, and they met once a month to have dinner and discuss topics of the day. (Women could be invited as guests but only by the host of the dinner.) Like some of the other organizations on this list, a common way to become a member was to be voted in after an existing member died. Some of the most prominent science fiction writers of their day were members, with Isaac Asimov, Martin Gardner, and L. Sprague de Camp being some of the more famous attendees. (In fact, Asimov’s fictional group the Black Widowers was modeled after the Trap Door Spiders.) 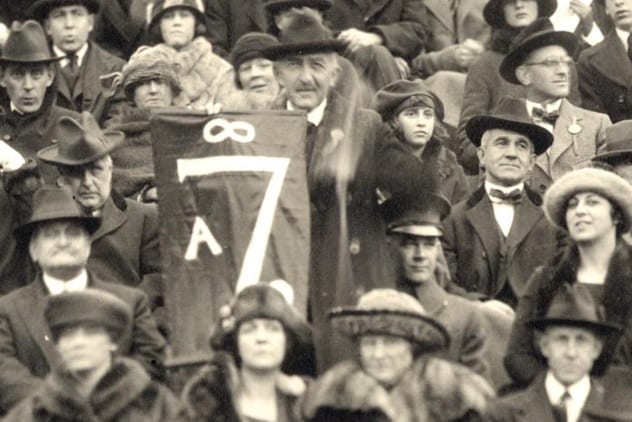 An incredibly secretive group, the University of Virginia’s Seven Society and its origins are shrouded in mystery. They have a logo which is the number seven, surrounded by the signs for alpha, omega, and infinity. (The first official sighting of the symbol was in 1905, in UVA’s yearbook Corks & Curls.) As for its members, no one is sure who is in the club, and they are only revealed after their deaths, when a banner appears at a member’s funeral. (The University Chapel bells, donated by the Seven Society, will also toll in a pattern based around the number seven.)

Their only real public presence is the fact they seem to be incredibly generous, often giving away money in extravagant ways.[5] During the commencement address in 1947, a small explosion took place near the stage, with a check for $177,777.77 floating to the ground. (The money was used to establish an interest-free loan fund for any student, faculty, or staff member who found themselves in financial trouble.) Other donations included $77.77 to install a drinking fountain in 1955 and $14,777.77 in 2008 to start a fund for student-submitted ideas for improving UVA. 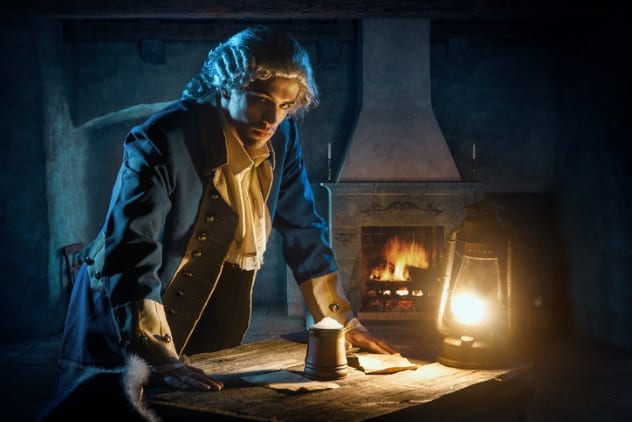 Officially known as the Ancient and Noble Order of the Gormogons, this particular secret society sprang up in 1724, when an article in London’s Daily Post described their appearance in the city.[6] They claimed to have come from the Chinese, millennia in the past, and their goal seemed to be to set themselves up as anti-Freemasons. In fact, if a former Freemason wished to join the group, he had to first renounce the Masonic Order.

Since they left no paperwork or writings of any kind, the origins and practices of the Gormogons are all but surely lost to history. One theory is that the group was the creation of Andrew Michael Ramsay, an ardent Freemason otherwise known as the Chevalier Ramsay. Whatever the truth, they disappeared in 1738, the very same year Pope Clement XII published his bull against Freemasonry. 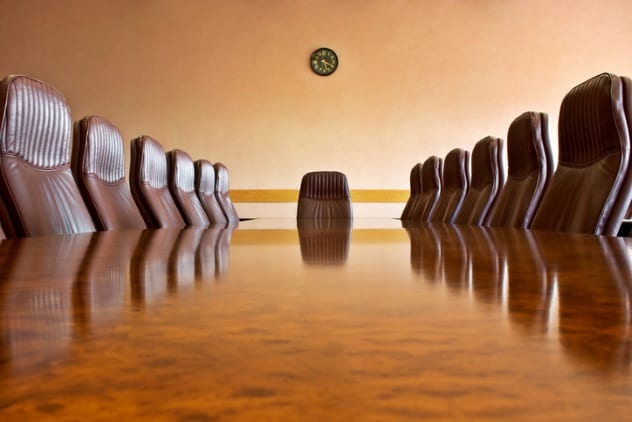 Finally! Our first secretive, pulling-the-levers-of-global-politics, conspiracy-laden group. Founded in 1973 by David Rockefeller, allegedly after his fellow members in the infamous Bilderberg Group refused to include Japanese members in the club, the Trilateral Commission was designed to foster cooperation between the leaders of Japan, Europe, Canada, and the United States. Rockefeller, as well as the other co-founders, saw problems with the status quo, believing the various countries that make up the Trilateral Commission would benefit from a focus on solving their common problems.[7]

Originally, the group was only going to be around for three years, a triennium, but their work has been subsequently extended for additional periods up to the present day. Since its creation, the various regions have been grown to include countries such as China, India, and Mexico. Conspiracy theorists often point to the group, as they do with similar organizations, as leading the charge for a worldwide government or economic system. (This is probably due to the fact that many of the most prominent political or private industry leaders have been or are members of the group.) 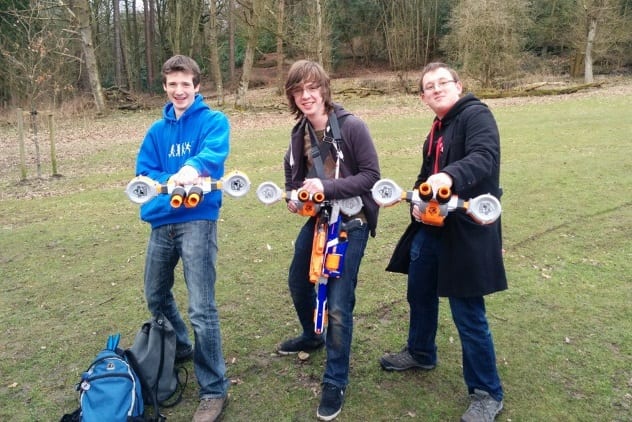 Durham University, located in North East England, is home to a UNESCO World Heritage Site (Durham Castle) and, perhaps a bit less well-known, the Durham University Assassins’ Society (DUAS). Founded in 1996, DUAS is one of the oldest, as well as one of the most active, assassins’ societies in the world.[8] They run a number of different “games” throughout the school year, ranging in duration from a few hours to a few weeks. The “games” consist of players attempting to “kill” other players, normally with a Nerf gun or a cardboard knife.

DUAS even gives out awards to its members, many of them relatively silly, such as the Stephen King Award for Best Narration, which, one year, went to Millie Power for using poetry in her kill reports. In addition, there are an incredible amount of rules, with amazing specificity, with which members play the “games.” 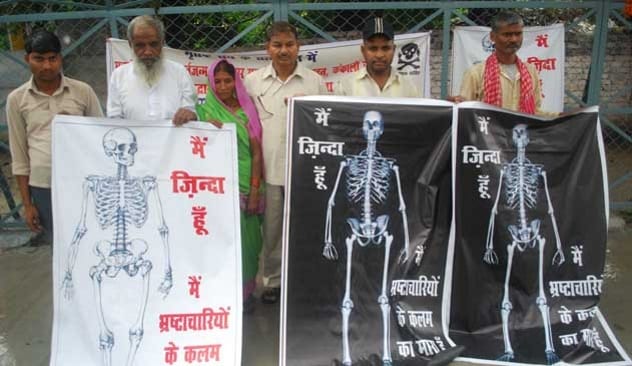 In 1975, a man named Lal Bihari applied for a bank loan in his home district of Uttar Pradesh, India, only to be denied. When he asked for the reason, the bank told him he must have been lying about his identity because Lal Bihari had been declared dead. So began an 18-year journey to prove he wasn’t really dead. (It turned out that his uncle had bribed an official in order to take over Bihari’s share of his ancestral farmland.)

After making little to no headway, Bihari sought out others like him. He eventually found a large underground collection of people and decided to form the Uttar Pradesh Association of Dead People. Their main goal is to force the government to recognize they are alive, something which often goes hand in hand with reinstating land which was illegally taken from them by corrupt politicians and crooked family members.[9] In addition to attracting thousands of fellow Indians to his group, Bihari also received the Ig Noble Peace Prize in 2003. 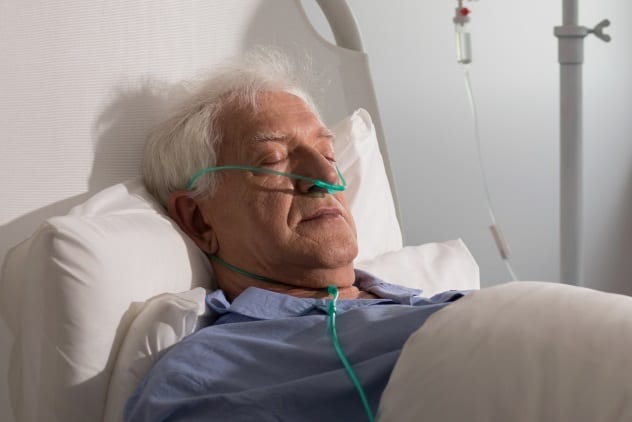 Founded in 1980 by Derek Humphry in his Santa Monica garage, the Hemlock Society became one of the largest right-to-die organizations in the US. Their overriding philosophy was that people should be allowed to legally end their own lives, through the use of doctor-prescribed medication.[10] (They did not believe in suicide for emotional reasons, just for those with terminal or untreatable illnesses.) Though they never officially helped anyone commit suicide, various members have helped in the past with other members. (Some people dispute this claim, citing descriptions of poisons and lethal levels found in past literature.)

Their name is derived from the story of the Greek philosopher Socrates’s death, in which he drank poison hemlock. Membership levels in the group plateaued in the 1990s before other like-minded groups sprang up, and the levels began to decline. In 2003, perhaps feeling as if a rebranding was in order, the group changed its name to End of Life Choices, before merging with a new organization called Compassion & Choices a year later. (They also got rid of their old motto: “Good life, good death.”)