Are we alone in the universe? This is a question that has been asked for quite a long time. Many believe that there is other intelligent life in the universe and that these aliens have visited us, but this claim has proven to be one of the most controversial to present and defend.

Many individuals who have reported encounters with UFOs and extraterrestrial beings have claimed to have physical proof that otherworldly life is, in fact, real. Experts, however, claim that this evidence had been either doctored, falsified, or is nothing but a flat out lie. Here are ten UFO encounters that have occurred but were then quickly “swept under the rug.” 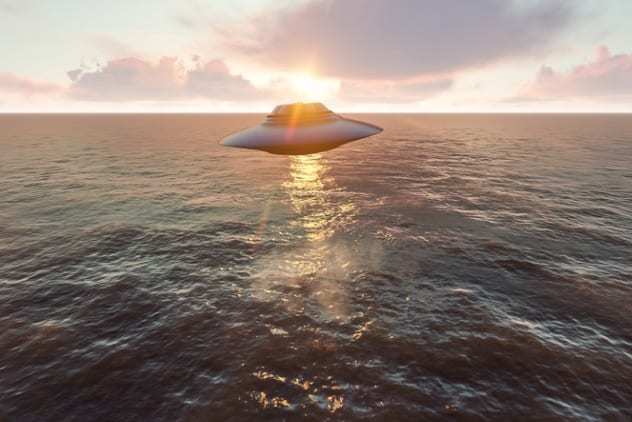 In 2004, two United States Navy pilots, Commander David Fravor and Lieutenant Commander Jim Slaight, were both conducting a military training exercise off the coast of San Diego. During their training, the pilots received a message from an operator located on the nearby base informing them of the presence of a strange aircraft within their airspace. According to the operator, the military had been tracking this unidentified aircraft for weeks, and the UFO sometimes performed strategic movements, such as a sudden dive or even a hovering motion. Both pilots were then asked to investigate and attempt to obtain a visual of the unidentified aircraft.

After searching for quite a while, Slaight and Fravor spotted the aircraft. According to their reports, it was 12 meters (40 ft) long. Fravor stated that the UFO hovered about 15 meters (50 ft) above the ocean and appeared to disturb the water beneath it. Fravor attempted to move closer to the UFO, but while he was making his descent, the object rose from its hover to meet Fravor and then took off at an unimaginable speed! In his statement, Fravor told reporters, “I can tell you, I think it was not from this world!”[1] 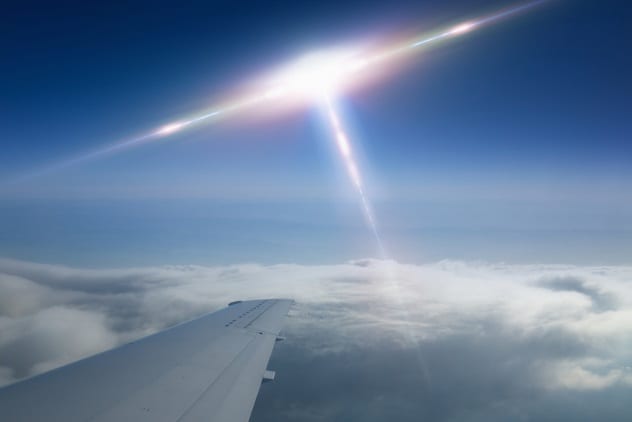 On February 24, 2018, a UFO was spotted above Arizona by two pilots who were in the middle of their flights when they encountered the aircraft. The pilot of a Learjet 36 spotted an aircraft flying over and above his plane. He then asked the controller on duty if any other plane had passed by him, and the controller said no, even going on to joke that the aircraft might have been a UFO. Little did they both know that the joke was about to become very real.

Shortly after speaking to the Learjet pilot, the controller contacted another pilot flying an American Airlines plane and asked the pilot to inform him if an aircraft passes over the airplane. A while later, the American Airlines pilot radioed in and reported that an unknown aircraft had just flown past his plane at a great speed. He also reported that the UFO had lights that illuminated the entire object. Although both pilots had seen balloons at that altitude, the Learjet pilot stated, “The only thing different about this was that it was too bright.” 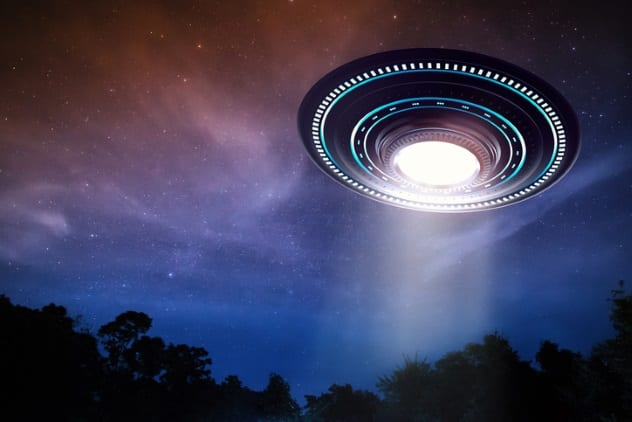 In case you were wondering, this UFO sighting was not reported by pilots.

During the Cold War, the US Air Force had a radar base on the foot of Vermont’s East Mountain. Over 175 men were stationed at this base and lived about 1.6 kilometers (1 mi) down from the mountain. In 1961, a strange object suddenly appeared in the sky above East Mountain. According to the military reports, the UFO held its position in the sky for 18 minutes.[3] 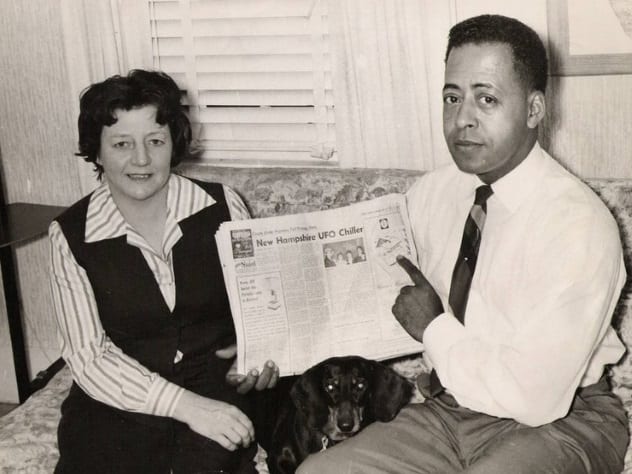 This encounter occurred in 1961, the same year as the UFO sighting above East Mountain in Vermont. It was also one of the earliest publicized reports of abduction by beings from another planet. Betty and Barney Hill claim to have been abducted by extraterrestrial beings on the night of September 19 during their journey home to New Hampshire. While on the road, they saw a light flash in the sky. They initially thought that it was a shooting star but quickly changed their minds when they saw the light begin to change direction. They then decided to pull over in hopes of getting a better view of this unusual light. Using binoculars, they discovered that the light was actually an unusual ship flashing lights of all colors.

After seeing this, the couple drove off and continued to head home. As they traveled, the couple noticed that the aircraft was descending closer to their vehicle. They estimated that the aircraft was about 12 meters (40 ft) long. The UFO dropped so close to their car that they stopped. This time, Barney was able to see humanlike or humanoid figures in black uniforms through the windows of the ship. Startled, the couple took off again, this time at much faster pace! They then began to hear noises emanating from the UFO while experiencing a tingling sensation throughout their bodies. The couple then blacked out and awoke nearly 56 kilometers (35 mi) away from where they originally were.[4]

After enduring this frightening experience, both Barney and Betty Hill later gave statements (under hypnosis) that they were taken onto the UFO and were examined by the extraterrestrial beings that occupied it. Today, there is sign near the area where the Hills were abducted, describing the event that reportedly took place that night in 1961. 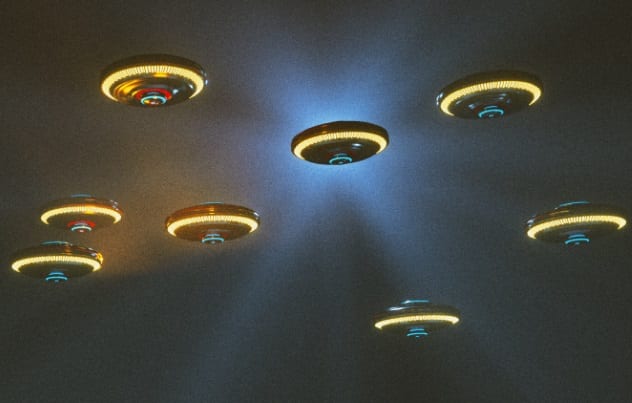 Another monumental New England UFO encounter happened on September 3, 1965, in Exeter, New Hampshire. According to author John G. Fuller, a policeman on patrol just after midnight approached a woman who was parked beside the road. The woman was attempting to catch her breath as she told the officer that a UFO had been chasing her down the road.

After a few hours had passed, a young man came to the police station and claimed that he saw a line of five bright lights over a house while he was hitchhiking on a nearby highway. He also stated that the lights continued to appear and reappear behind a line of trees while moving over a field. The young man then led several police officers to the exact location where he saw the lights. Sure enough, the officers witnessed everything that the young man had told them at the station earlier.

As weeks passed, officers continued to get reports of UFO sightings in the city of Exeter, receiving a total of 60 in all![5]

5 The Flying Saucer In Rhode Island 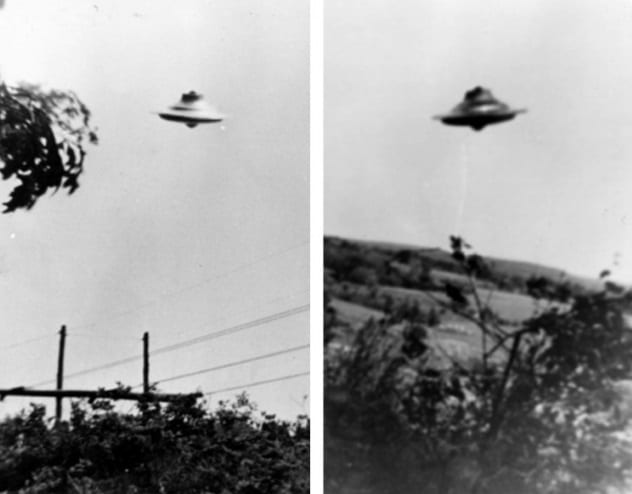 On June 10, 1967, Harold Trudel was able to capture some of the most groundbreaking photos of a UFO during that time. Trudel claimed to have seen UFOs many times before but decided that June 10 would be the day that he would obtain documentation of what he had seen. Around midday, Trudel waited patiently on West Wrentham Road near the city of East Woonsocket, Rhode Island.

According to Trudel, after he’d sat for a few minutes, a UFO descended from the clouds above and hovered over a nearby power line. It was then that Trudel was able to capture his photos of the craft. His images show an unusual object floating in the sky. The UFO remained in its hovering state, allowing Trudel to capture seven separate pictures of it.[6] (They had slow cameras back then.) 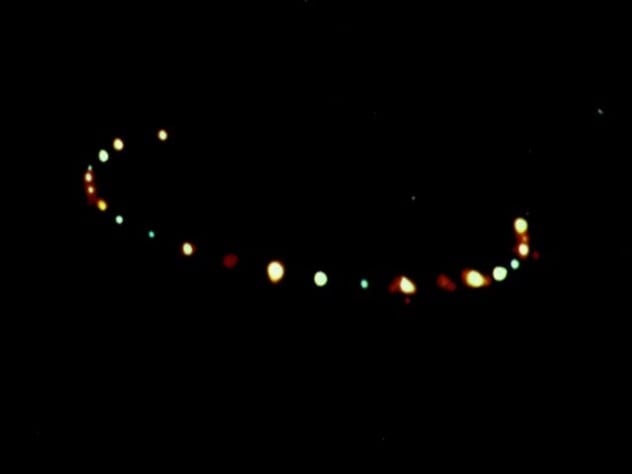 On May 26, 1987, a man named Randy Etting was taking an evening stroll in his hometown of Newtown, Connecticut. After walking for a while, he noticed that there were orange and red lights present in the sky which were moving in a western direction! Being a commercial airline pilot (aliens must really love pilots), Etting often observed the sky and knew that these lights were unlike anything that he had ever seen. He then took out his binoculars and ushered his neighbors to come outside and see what he was looking at. In a later statement, Etting said that even cars on the highway pulled over to watch as the lights passed over Interstate 84. Police reports confirm Etting’s statement, showing that between 9:30 and 10:15 PM, over 200 people reported seeing a UFO in the area.[7]

Etting was also able to capture a picture of the lights as they continued to move. His image depicts a multicolored semicircle composed of various colors. Witnesses also claimed that their vehicles completely lost power while the UFO was above them! Minutes later, calls came in from the nearby town of New Milford, detailing reports similar to those that came in from Newtown. After a while, the lights simply vanished, and it was never confirmed whether or not they came from a man-made aircraft or if they were truly not of this world. What do you think? 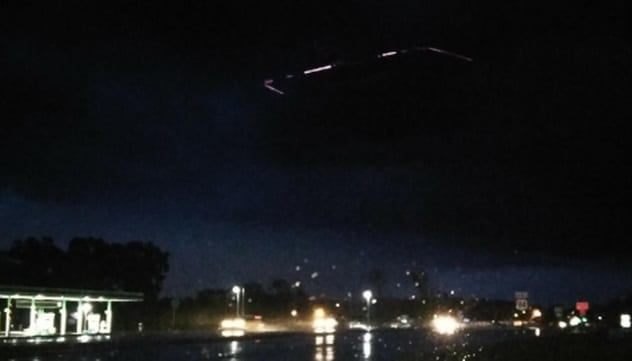 This particular sighting occurred on August 18, 2018. Javion Hill was driving on US 74 just southwest of Charlotte, North Carolina. While on the phone with his wife, Hill spotted unusual lights in the nearby clouds; they were shaped in the form of a square. Hill took several pictures of the lights while driving and even took the next exit in hopes of capturing a video.

In 2011, two videos surfaced of a strange object descending and hovering over the Dome of the Rock in the city of Jerusalem. The videos sparked a huge Internet debate over their credibility. (Note that many now consider the videos to be fake.) In one of the videos, a round object can be seen floating above the Islamic shrine. The object remains for a while. Then a bright light suddenly emanates from the ship, and it ascends into the sky rapidly.[9]

The second video was taken at a distance from a nearby mountain, but the distance did not take away from what many people saw that morning. The video again showed the object hover, flash a bright light, and then rise at a rapid pace. Although the individuals who filmed the encounter spoke a different language, the sound of awe and mystery was easy to interpret as they stood and observed the object.

1 Chicago Airline Employees Spot a UFO Above the Tarmac 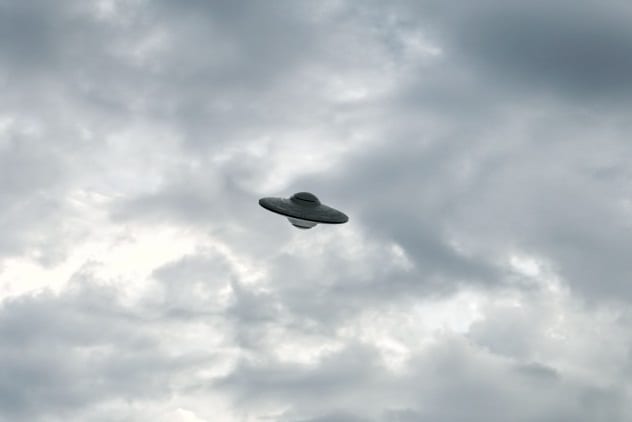 In November 2006, a commercial airliner was preparing to take flight from Chicago’s O’Hare International Airport to North Carolina. While working on the tarmac, a United Airlines employee noticed that there was a gray craft hovering over gate C17. A few other United employees along with a couple of witnesses outside the airport spotted the exact same aircraft.

According to reports, witnesses say that the unidentified aircraft hovered over the gate for a few minutes before shooting upward into the sky. The witnesses also reported that the aircraft left a hole in the clouds big enough for them to see the blue of the sky above. After receiving the reports, the FAA called the encounter a “weather phenomenon” and declined to investigate.[10] The unidentified craft was not seen on radar.

Read about more bizarre UFO encounters on 10 UFO Sightings From Very Early History and 10 Intriguing UFO And Alien Accounts From The Soviet Union.