When you put the words “castle” and “Europe” together, several famous castles are bound to enter your mind. Thanks to the rise of social media, these renowned fortresses are more prevalent than ever. Perhaps the most famous castle in the world is Neuschwanstein, near Munich, Germany, which is said to be the inspiration for Walt Disney’s Cinderella Castle. There’s also Buckingham Palace and Windsor Castle in England, made famous thanks to the British royal family and their many generations of rule. There’s the outrageously opulent Versailles Palace near Paris or Kronberg Castle in Denmark, the home of Shakespeare’s Hamlet.

However, there are European castles other than Neuschwanstein and Versailles. Europe is full of unique castles, hidden gems found off the beaten path. With little effort, you’ll find giant fortresses looming over old towns, ornate beauties hidden in the mountains, ruins on the coast, ancient strongholds balanced on the edge of cliffs, and more. You’ll be hard-pressed to find one that doesn’t strike your fancy, whether you prefer to view from afar, from a hiking path, from the inner courtyard, from a boat, or just from your own two feet.

Here, we look at ten castles, in well-known castle destinations such as Germany and Ireland or in less-visited countries like Montenegro and Slovenia, that will have you plotting your own fairy-tale ending—or at least planning your next trip to these enchanted destinations! 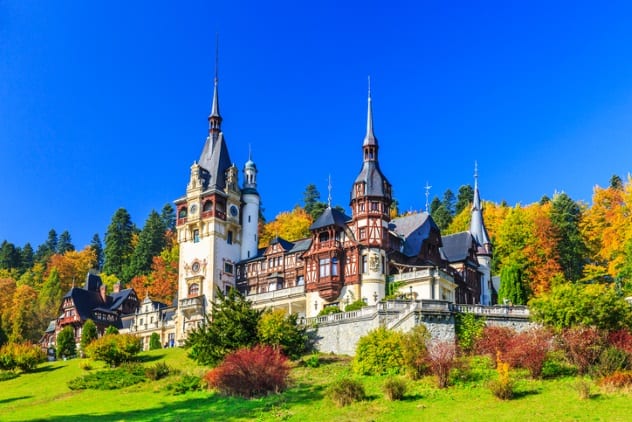 Peles Castle, high in the Carpathian Mountains, seems to be right from the pages of a fairy tale. It’s a happy and sudden surprise to come upon this ornate beauty in the remote woods, far from any large cities.

The building of the castle began in 1873 at the bequest of Carol I, king of Romania, who fell in love with the surrounding area. The castle took ten years to build and was immediately considered one of the most modern in Europe, thanks to the amenities.[1] Additional work was done on the castle until 1914.

Today, you can tour the beautifully preserved interior (keep an eye out for the spiral staircase!) and the nearby Pelisor Castle, a smaller hunting lodge. Or you can just stare at Peles and imagine yourself using it as a stronghold from which to fight vampires. Or is that just me? 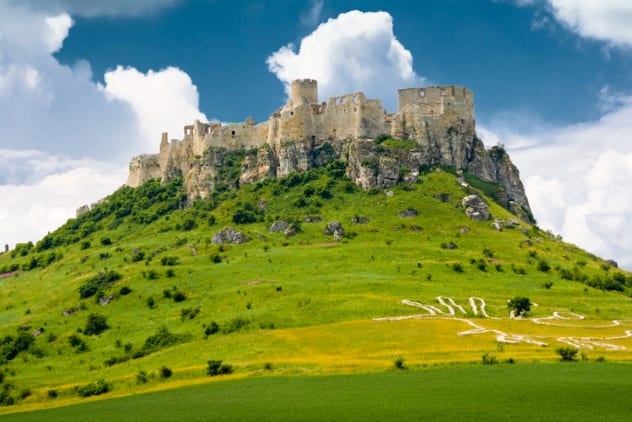 High on the hills near the town of Spisske Podhradie in Slovakia, you’ll find the ruins of Spis Castle. Slovakia itself is even more off the castle path than any of the others on this list and is underrated as a tourist destination in general, often overlooked in favor of the more famous Czechia.

However, Slovakia is well worth a visit. The history and landscape are quintessential Central Europe, and Spis Castle adds to this charm. Spis has occupied the top of a hill above a small village since the 12th century and has been used as a defensive stronghold and as an upper-class courtier destination at various points in history, giving it a both a decorative and defensive air.[2] The castle is in ruins now, but many sections have been preserved as a museum. Old, awesome, and in a spot you would never think to venture, it’s only for those in the know. 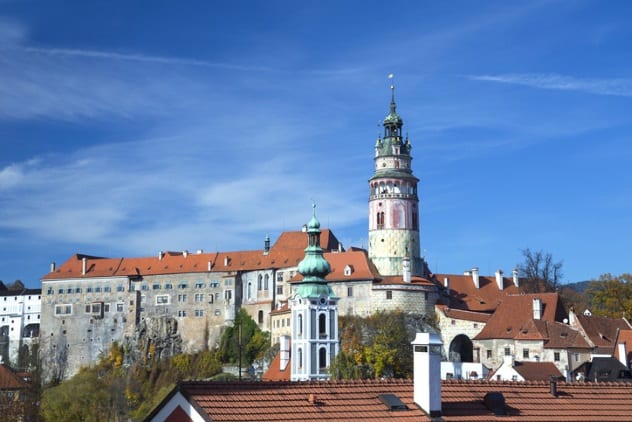 Although not nearly as famous as its big sister to the north, Prague Castle, Cesky Krumlov Castle in the south of Czechia has appeared in several films, for good reason. The unique pink tower rides high over the Vltava River and the ridiculously charming town of Cesky Krumlov.[3]

Cesky Krumlov itself is a beautifully preserved medieval village, picturesquely situated on the same river that flows through Prague. The castle is the crowning glory of this hamlet, and the distinctive pink tower can be seen all over the surrounding countryside. When you visit, make sure to spot the bears living in the castle moat. 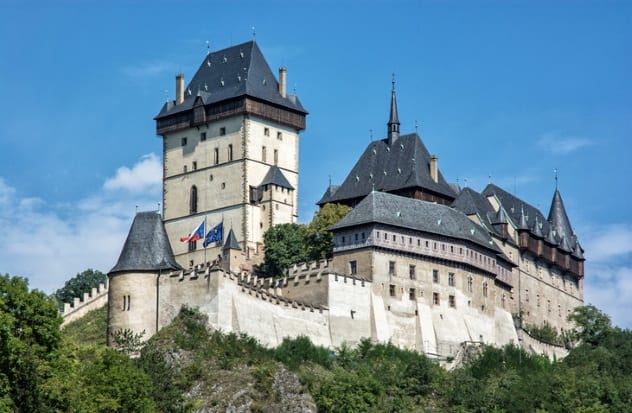 Who knew Czechia had so many amazing castles? For a true medieval experience, visit Karlstejn Castle, a short hour’s train ride from Prague.[4] Karlstejn appears over the flat farmlands well before you arrive, like a brooding giant, with its black roof and Gothic architecture. It will continue to loom over you as you make your way through the small village below from the train station.

The castle aims to transport you back to the medieval days, through food, the setup of the castle, and the artifacts on display. Grab a variety of sausages to sample, explore the ancient courtyard and battlements, and be sure to spot a blacksmith at work, performing his age-old craft. 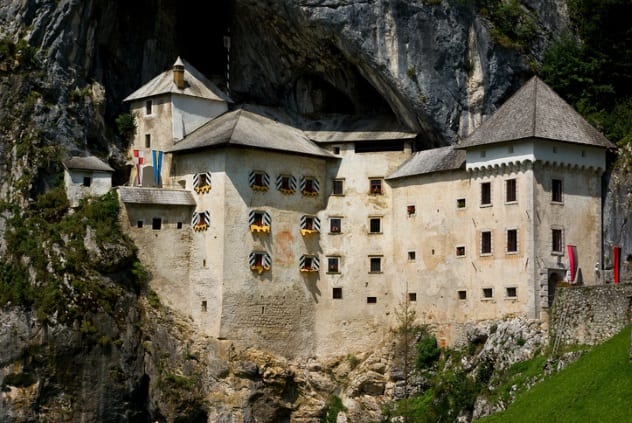 Possibly one of the most unique castles in the entire world, Predjama Castle in Slovenia, about an hour south of the capital, Ljubljana, is built into a cave on the side of a cliff. That’s right—in a cave. If that wasn’t enticing enough, the Slovene version of Robin Hood, Erazem Lueger (also referred to as Erasmus of Lueg), famously lived and died here.[5] He was able to evade the Holy Roman Emperor for so long thanks to a series of hidden passageways leading through the cave in which the castle was built. In fact, he was only defeated—while on the toilet, according to legend—because he was betrayed.

If this story straight from Game of Thrones doesn’t inspire you to visit, keep in mind that in 1991, treasure was discovered on the castle grounds as well. A robber baron, hidden treasure, secret passageways, a castle built into the side of cliff . . . Predjama Castle is truly the stuff of legends. 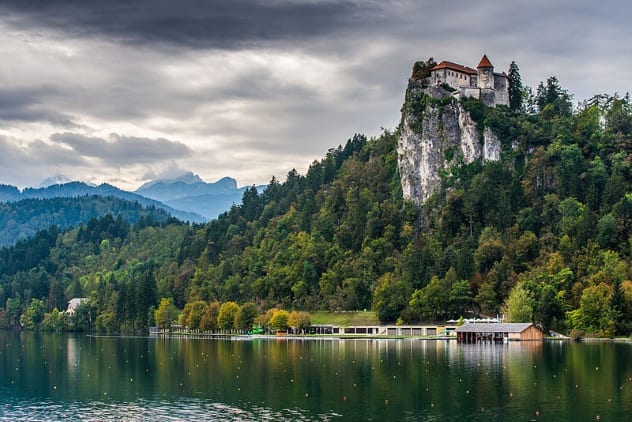 Lake Bled in Slovenia is gaining international attention for its picturesque beauty. It’s easy to see why—the crystal blue waters of an alpine lake, full of history, a resort-type feel, a famous island church, and a castle. While the island in the lake with its accompanying church is more iconic as a symbol of Lake Bled and Slovenia itself, Bled Castle, towering over the lake on a nearby cliff, is equally stunning.[6]

Bled Castle looms over the glacial lake, with the Julian Alps as a dramatic background. Reputed to be the oldest castle in Slovenia, dating from at least the year 1011, the castle today holds events such as weddings and important political meetings and boasts a restaurant, wine cellar, museum, and more. The best part? The views from the castle itself are breathtaking and give a unique vantage point to look upon the lake and surrounding mountains. 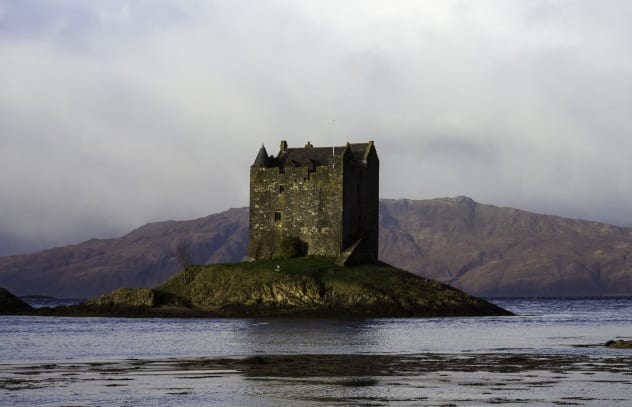 Scotland is another place full of absolutely iconic castles. While many of these are worth a visit (such as Eilean Donan in the Highlands), the ones that you stumble upon unexpectedly seem even more magical. Castle Stalker, on an island in Loch Laich, is one such place. The small tower, inhabiting a tiny island on a classic Scottish loch, features a gorgeous background of mountains and the Highlands.

Loch Laich, located near Oban on the west coast of Scotland, has housed the small tower-keep since 1320. Castle Stalker has a long and varied history and has passed through the hands of many powerful Scottish clans, such as the Stewarts and Campbells.[7] Today, Castle Stalker is privately owned and difficult to tour, but you can gaze at it from the shore any time of the year. Although Castle Stalker may seem hard to reach, it is ideally situated in the region of Argyll between many other well-known Scottish destinations. 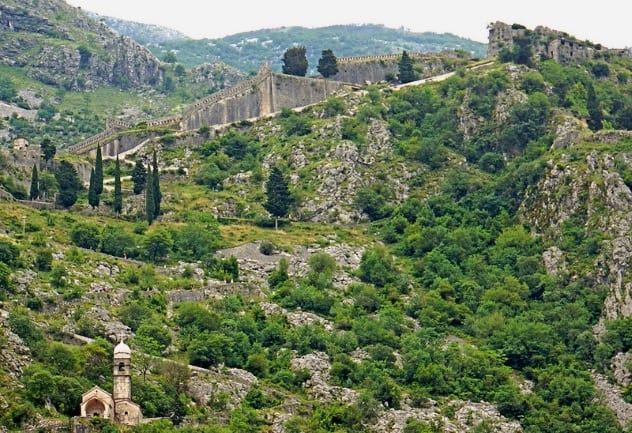 San Giovanni Castle, also known as St. John’s Castle, is situated high above the breathtaking Kotor Bay, and the charming old town of Kotor itself, in Montenegro. San Giovanni has been a fort since Byzantine rule and has a long and storied history. The castle has known Venetian conquerors, survived several earthquakes, was bombed by British forces, and was occupied during World War II.[8]

Today, San Giovanni is part of the greater Kotor fortifications, which extend down into the city walls of ancient Kotor itself. The fortifications were made a UNESCO site in 1979. The hike up to the castle is difficult, but the views from the top over Kotor, the bay, and the stunning Montenegrin mountains are well worth every step. 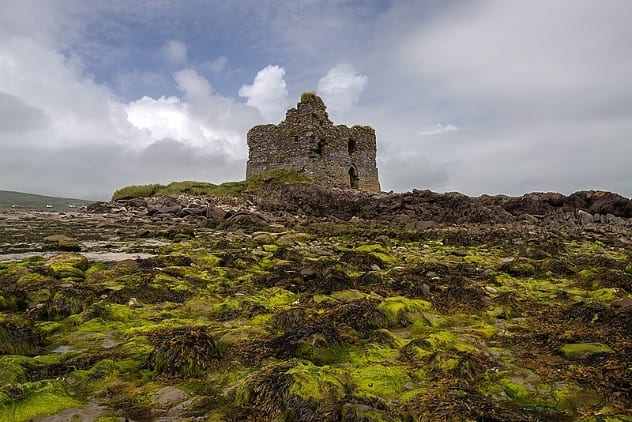 It seems like every bend in the road in Ireland will give you a stunning vista, a charming cottage, or best yet, an ancient ruin. Ballinskelligs Castle, also known as McCarthy Mor Tower, is yet another of these ruins, made even more spectacular by the setting. Ballinskelligs Castle lies in the Ballinskelligs Bay and is only easily accessible when the tide is out, although it is visible from Ballinskelligs Beach. It is said that the tower was originally built as a stronghold to protect against pirates rampaging along the Irish coast.[9]

A castle that combines the beauty of the Irish coast and pirates is one to add to your list! In addition, the castle is part of the Ring of Kerry, perhaps one of the most picturesque routes in the world. 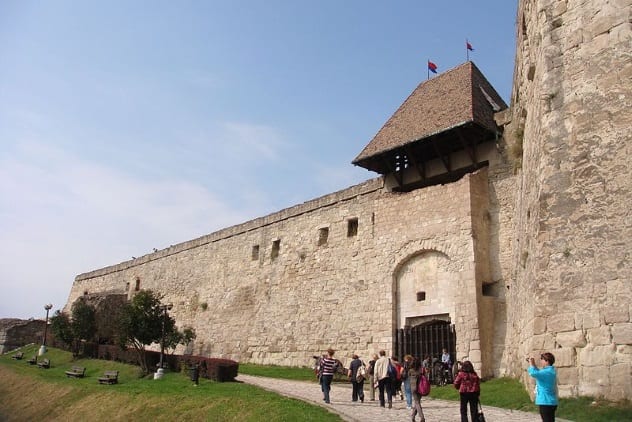 Nestled in the “Valley of Beautiful Women” is the town of Eger, Hungary. Eger is a short two-hour train ride away from the Hungarian capital, Budapest. While Eger isn’t well-known outside of Hungary, the city and its corresponding castle are full of rich history.

Eger Castle is the storied site of the famous eponymous siege in 1552, in which the Hungarians stopped the invading Ottomans in their tracks.[10] The monthlong siege, which ultimately failed, stopped the further invasion of the Ottomans for roughly another 50 years. Legend says that when the Ottomans fled, they told tales of the Hungarians and their strength, which they believed was due to the Hungarian tradition of drinking “bull’s blood” for extra energy and power. This “bull’s blood” was actually red wine, a specific wine to the region that retains its name to this day—Egri Bikaver.

The castle is a short hike up from the lovely little square, with a view over the city and the valley. After a tour of the castle, make your way to the famous wine cellars of the valley, where you can try Egri Bikaver and a variety of other fresh local wines besides, straight from the source. Cellar-hopping. It’s the new wine-tasting.

Amy McMahon currently resides in Montana with her husband and baby daughter, after spending ten years living and teaching all over the globe, from Peru to China to Hungary. Find more of her storytelling at her blog, Amy and the Great World, or on Instagram: @amygreatworld.

Read about more amazing and interesting castles on 10 Unique Ruined Forts and Castles and 10 Tales Of Haunted Irish Castles.