Alexandra Hager is an incredible modern photographer and her work has been received with great praise. She hails from Austria and was born in 1971. Her photos of children often contain creepy or unusual symbolism and these doll-like portraits are frequently offset with surreal or hyper-realistic backgrounds. Her pictures have been described as “haunting” and “fairy-tale like”. As you can see below – this is certainly no exaggeration. If you like these artworks you can buy Alexandra Hager prints here. Ms Hager has very kindly given Listverse permission to reproduce these images and we are very grateful for the opportunity to share these with our readers. 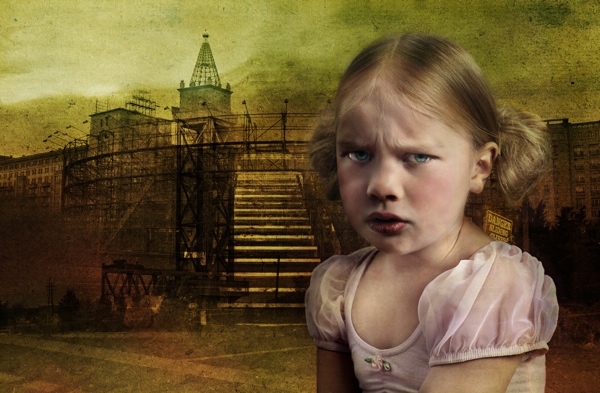 The young girl is pictured here in a party dress – perhaps after a picnic at the local pier but her expression is definitely a contrast to her outfit. 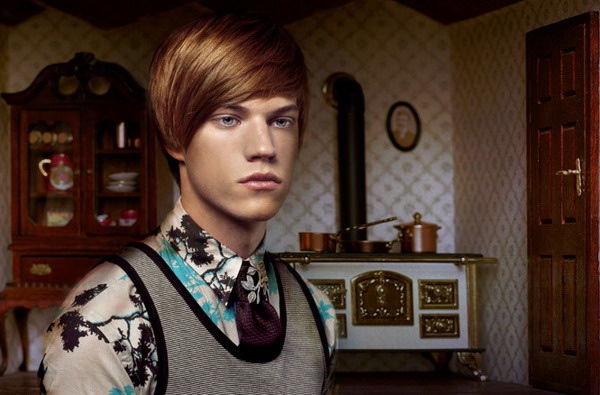 This photograph very well captures teenage angst as the fashionable boy is offset against and old fashioned background staring away. 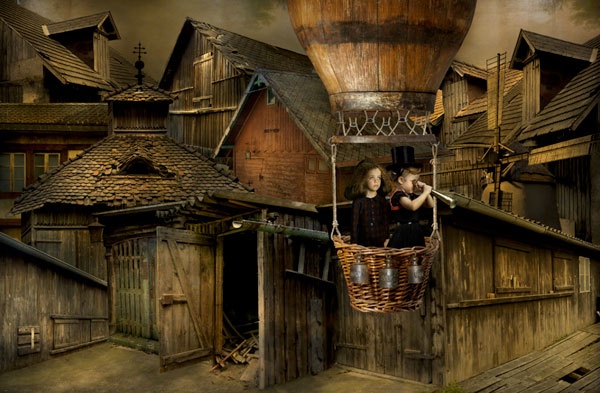 This happens to be one of my favorite pictures of Alexandra Hager’s as it combines two themes I love – dilapidation and hot air balloons (not normally found together I might add). 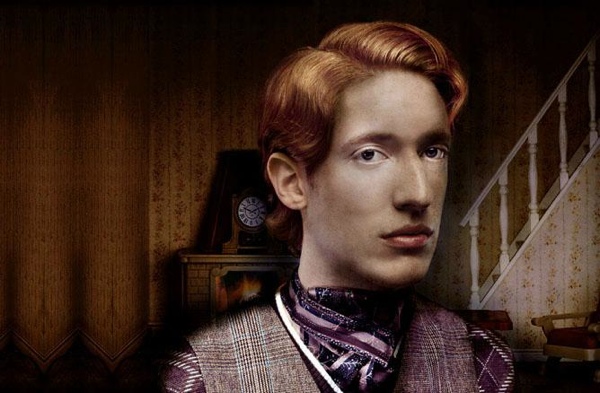 This young man managed to have an air of superiority which is mirrored in his clothing and hair style. The clock in the background suggests he may be waiting for something important to happen. This is a very well shot photograph that captures the little girl between two emotions – curiosity and fear of what she might find. It is set to a very famous fine-art background. 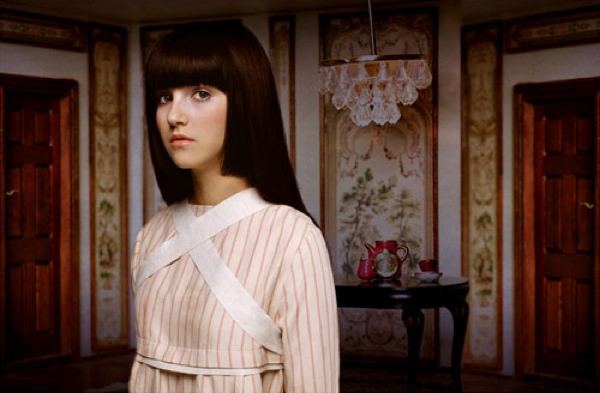 The straps around this girl’s bodice give a feeling of restraint – and her expression of boredom further strengthens that feeling. 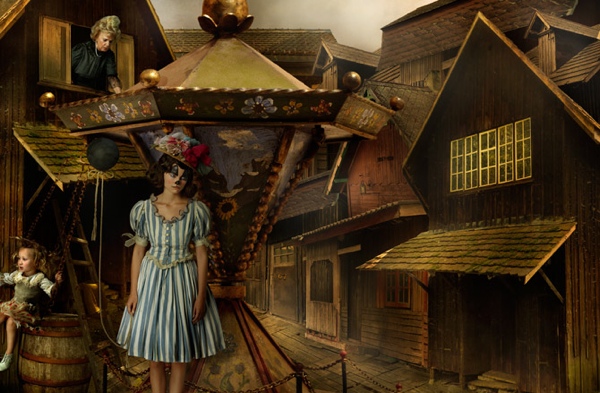 This photograph reminds me a lot of the Clown series by another great photographer Cindy Sherman. You can see an example of Sherman’s clown photos here – warning: coulrophobes should not follow that link. 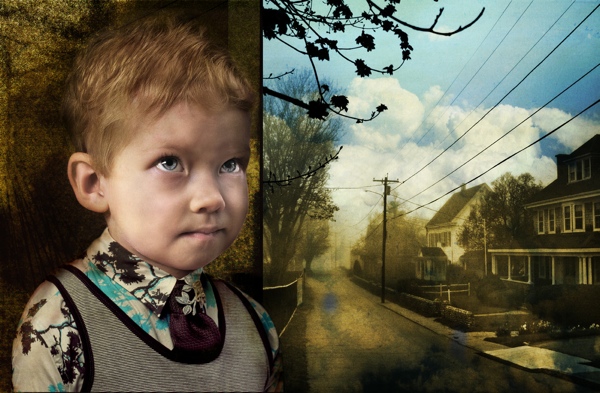 This boy has a secret – or he is hiding from his parents – maybe his father is beating his mother. The modern home in the background is given a completely surreal appearance by the use of the overall muted tones of the photograph. You can almost see the tears welling in his eyes.

7
Three in a Boat 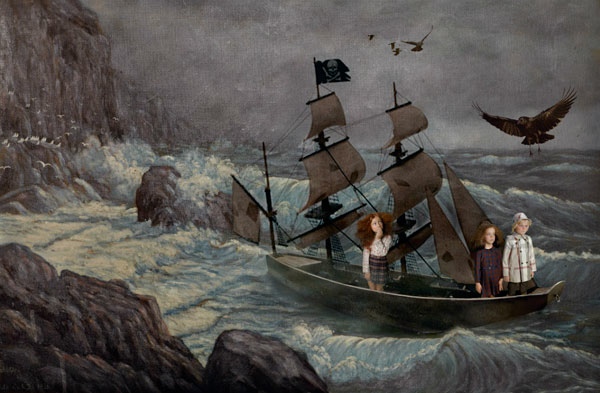 This, and the next four images all involve a recurring theme of Hager’s series – children, boats, and birds. The children in this first picture seem detached from their violent surroundings by their calmness – it definitely adds an eerie feel to the photograph. 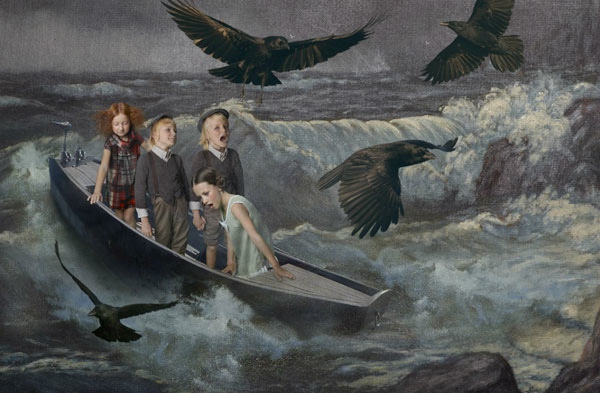 The looming birds in this scene seem to create an atmosphere of pending doom – they are like vultures waiting for their meal. 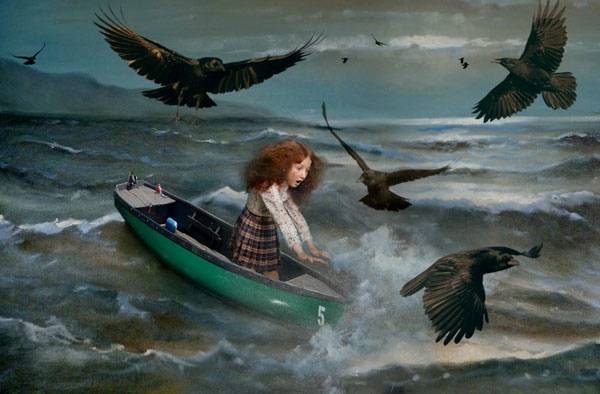 In this curious image the girl appears to be falling but her expression doesn’t imply the terror that should accompany a disaster. Perhaps she is planning to drown. 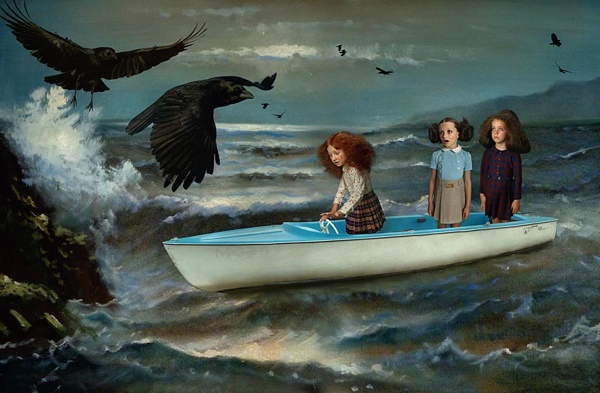 The girl’s clothing makes it difficult to date the period in which they are set and this is particularly confusing given the gothic nature of the background. Notice that the girl piloting the boat features in the four images above in very different emotional states.

3
Catch of the Day It is difficult to tell if the boy in the boat is hauling in a catch or releasing animals to the wild (or perhaps even to their death in the depths of the sea). 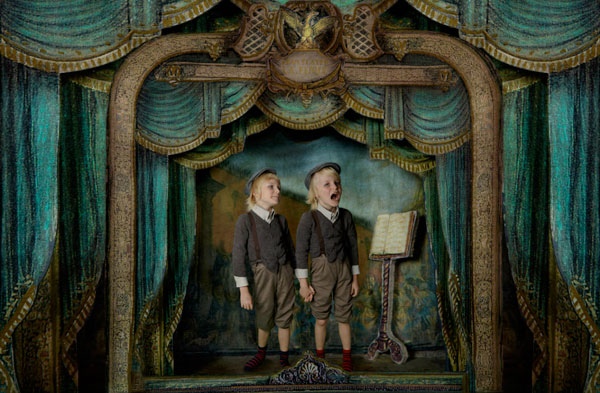 Twins practicing for choir in a very Victorian setting. Hager’s use of dull colors makes it appear that the boys have something better to do. The bleak and decrepit buildings behind the girl in muted colored clothes adds an air of desolation to her already desperate expression.