Almost every town has monuments of some sort—war memorials, statues of people long dead, or pieces of art commissioned to celebrate a momentous national occasion, for example. Sometimes we recognize the names on them. Often we do not.

Most of these monuments have become part of the scenery; we walk past them and barely even notice them. However, there are some monuments that can never fade into the background, either because they are too big, too striking, or because they are just plain weird. Here, we take a look at just a few of them.

10 The Child-Eater Fountain At Bern 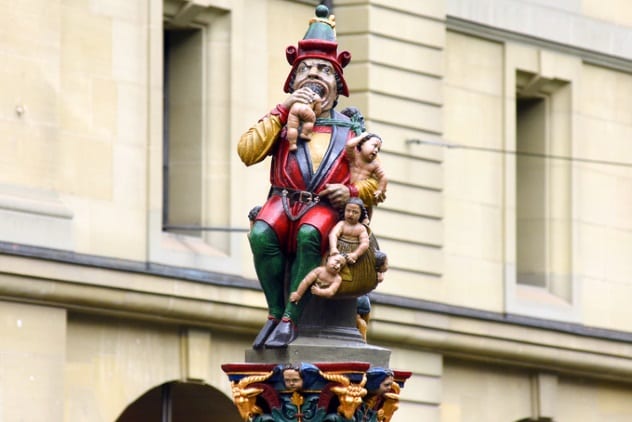 In 1545, the town council in the Swiss city of Bern commissioned Hans Gieng to create a statue to replace a 100-year-old one that had fallen into disrepair. What was there previously is not known. What Gieng created was enough to give the citizens of Bern sleepless nights ever since. The statue depicts a giant man eating a baby. He is holding another terrified infant as well as a sack also filled with babies.

It is unclear what the meaning behind the statue was intended to be, except, perhaps, don’t bring your children to Bern if they cry. The giant appears to be relishing his meal greatly as he swallows the head of a child.[1]

The Kindlifresserbrunnen (which means “Ogre Fountain” or “Child-Eater Fountain”) is said to be cursed. According to local tradition, the fountain flows with wine on Christmas night, but if it is drank, the imbiber becomes possessed by the Devil. And perhaps develops an insatiable appetite for cherubs? 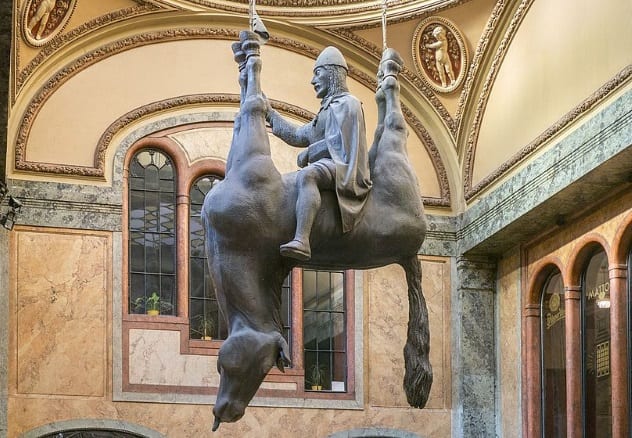 Wenceslas Square in Prague contains a statue of St. Wenceslas, the Good King of the popular “Good King Wenceslas” Christmas carol. The statue looks very traditional, though a little military for a saint, with Wenceslas proudly riding his horse, wearing a military uniform and helmet, and carrying a lance. It might be any statue anywhere in the world.

King Wenceslas is an important historical figure in Prague, ruling the nation in the early 10th century. He was said to be a fair king, unlike his brother Boleslaus the Cruel, who eventually murdered him. (Though with a name like that, it is little wonder he turned out to be a wrong ‘un.)

Tucked away in a corner of Wenceslas Square is another statue. Inside Lucerna Pasaz, you will find St. Wenceslas looking equally splendid, riding a horse which is not only dead but hanging upside down and suspended from the ceiling.[2]

The artist, David Cerny, was believed to have created the piece as an attack, not on a beloved Czech icon so much as on the Czech president, Vaclav Klaus. What exactly he was trying to say is anyone’s guess. 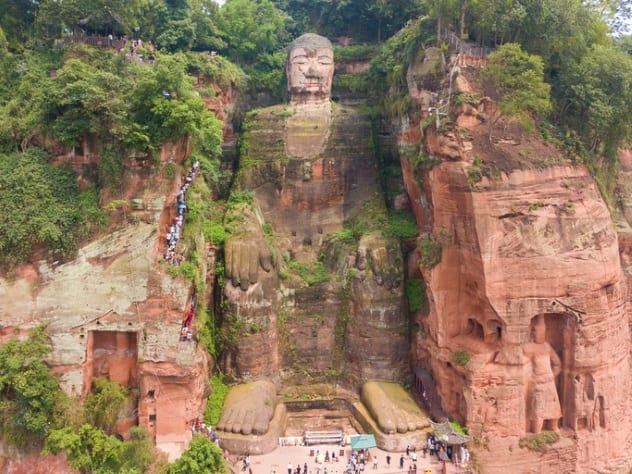 Work began on carving the statue, which overlooks the confluence of three rivers, in the eighth century. The statue remains relatively inaccessible due to the terrain, and this has helped to preserve the Buddha.

The construction was started by a monk named Haitong, who hoped that it would calm the turbulent waters where the three rivers met. When the construction was threatened by local officials, Haitong is said to have gouged out his own eyes to demonstrate his piety and sincerity. He was soon granted permission to continue, possibly because they were worried about what else he would cut off if they refused.

Unfortunately, Haitong did not live to see the completion of the statue, but he would have been pleased to know that the construction of the Buddha caused a buildup of debris in the river, which altered its course and did indeed calm the waters at the point where the Buddha’s eyes gaze.[3]

Of course, even if he had lived to see it, he wouldn’t have been able to actually see it, so perhaps it was just as well. 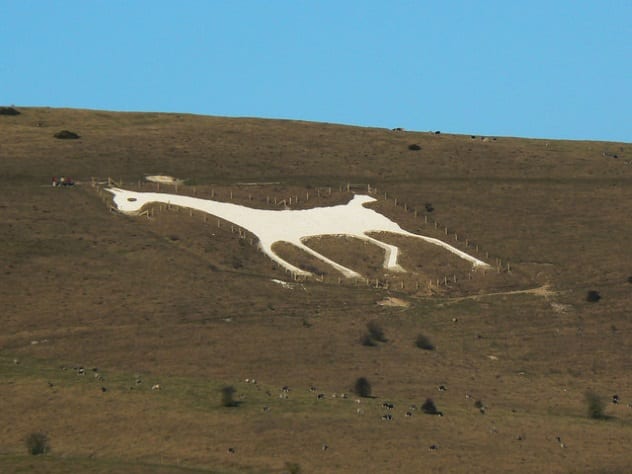 In 1812, a farmer named Robert Pile paid the grand sum of £20 to a man named Jack the Painter (who was, fortunately, a painter) to design and cut a horse into the hillside in Wiltshire, England. This was one of nine horses that were cut into the hills in this area during this time. No one seems to know why.

The design was carved out of the hill, with tons of soil scraped out and carted away. It was then packed with chalk so that it stood out in stark white against the green hills and could be seen from a great distance.

Jack the Painter, however, was something of a con man and subcontracted the work to another man who abandoned the job halfway through, after Jack had made off with all the money.[4] Despite its inauspicious start, the Alton Barnes White Horse was finally completed after Robert Pile paid again for it to be constructed.

The horse measures roughly 55 meters (180 ft) high and 49 meters (160 ft) long. It has been relined with chalk a number of times since it was created and can still be seen galloping across the Wiltshire Downs looking for its companions today. 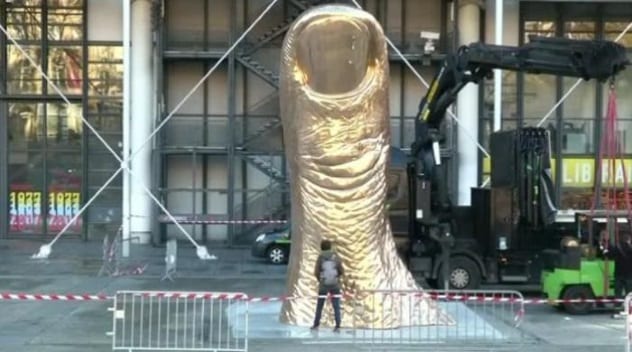 Cesar Baldaccini was a French sculptor and part of the Nouveau Realisme (New Realism) movement. This French art movement created pieces using unusual materials. Baldaccini crafted a number of startling statues from compacted cars and other pieces of junk. One of his most famous works, somewhat undramatically, is a thumb.

Standing 6 meters (20 ft) high, the cast-bronze statue of the artist’s own thumb is the second one he produced.[5] (The original was 12 meters [40 ft] tall!) Baldaccini famously did not discuss the meaning of his work. However, it seems clear that the meaning of this artwork is, well, thumbs up. 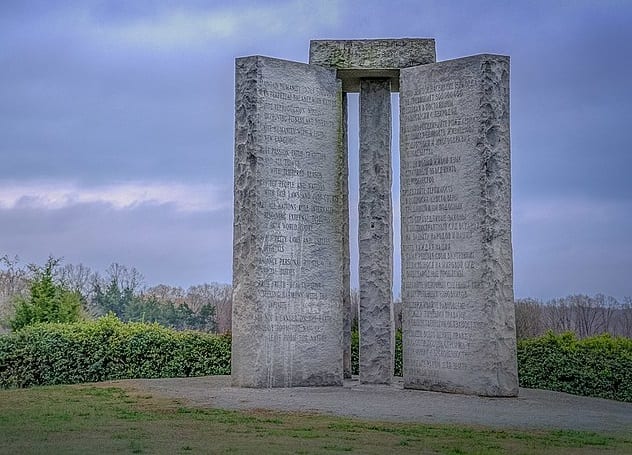 The Georgia Guidestones were erected in 1980. Commissioned by a man calling himself R.C. Christian, the stones were constructed with fairly elaborate secrecy, and the real identity of R.C. Christian will, in all likelihood, never be known.

However, the stones themselves are a legacy of sorts. Constructed from six huge pieces of granite, the stones have instructions for the survival of the human race carved in eight modern languages. Among the commandments is the edict that population should be controlled, that reproduction should be “guided” to maintain the survival of the fittest, and that disputes between nations should be settled in a world court.

The stones include a few basic astronomical features, such as a hole in the rock through which the North Star can be viewed. The capstone can act as a kind of calendar, should you you need one. The reasons for these features are unspecified. However, perhaps more information is yet to come. The stones are rumored to have a time capsule hidden somewhere at their base, to be opened when Armageddon finally arrives.[6]

So, watch these slabs.

4 Hand Of The Desert 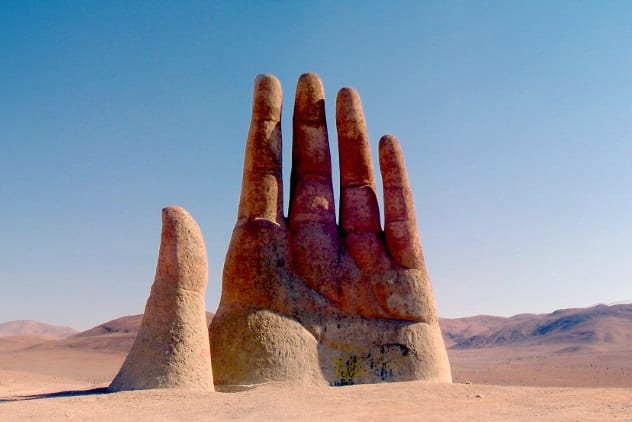 The Atacama desert is one of the driest and most remote places on Earth. Some parts of the desert have not seen rainfall in decades. It is not the sort of place that would attract a lot of visitors. It was a strange choice of venue, therefore, for sculptor Mario Irarrazabal when choosing where to put his latest artwork—a giant hand measuring 11 meters (36 ft) high poking out of the desert.

The hand is said to represent all the victims of torture and injustice who suffered during the military regime in Chile and symbolize their indomitable spirit and the power of love to triumph over evil. Unfortunately, not everyone sees it that way. Despite its out-of-the-way location, the piece is a regular target for vandals and graffiti artists, which, we might think, also says something about the indomitable spirit of taggers.[7] 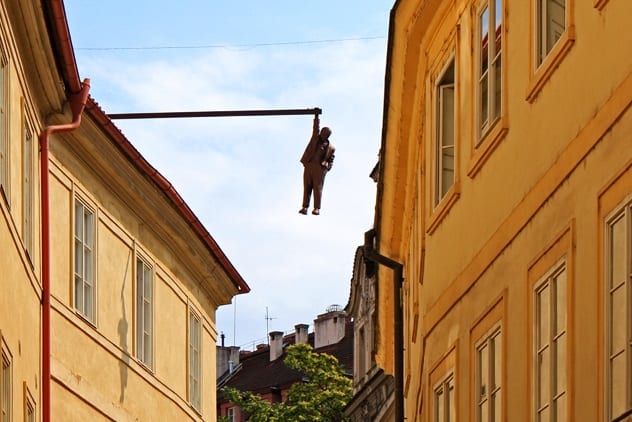 If you walk down a street in the Old Town district of Prague, you might be startled to see a man suspended one-handed from a flagpole. Emergency services have received several calls from concerned bystanders who believed that they were witnessing a suicide attempt or a man in desperate trouble.

Fortunately, they were not. What they were actually looking at was a statue of Sigmund Freud created by David Cerny (who also made the previously mentioned upside down horse). The piece is said to represent Freud’s pathological fear of death.[8] The man who spent his life interpreting the fears of others had a morbid dread of death.

Cerny is no stranger to controversy. He was the artist responsible for painting a Soviet tank pink. The tank was part of a memorial installed to celebrate the liberation of Prague after World War II. Cerny was arrested and briefly incarcerated for vandalism. 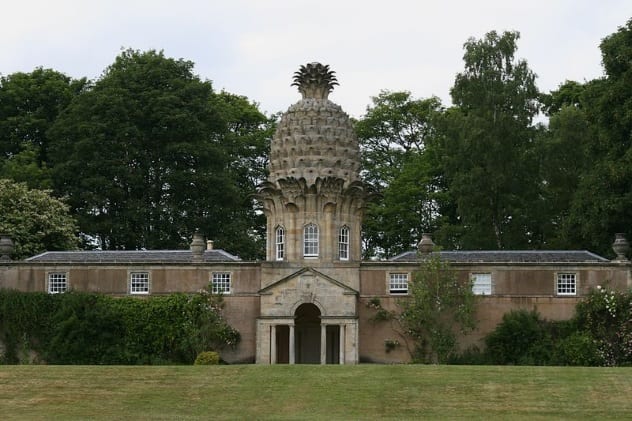 At the time, the pineapple was the most exotic fruit ever seen in Scotland. The summerhouse’s pineapple stands 11.2 meters (37 ft) high. The structure has four “vases” at the base of the pineapple, which are, in fact, concealed chimneys used for the heating system that was put in for the hothouse below. The hothouse propagated a number of exotic fruits and vegetables, including, of course, pineapples.[9]

All things considered, it is probably a good thing that bananas were not widely available in Britain until the end of the 19th century. 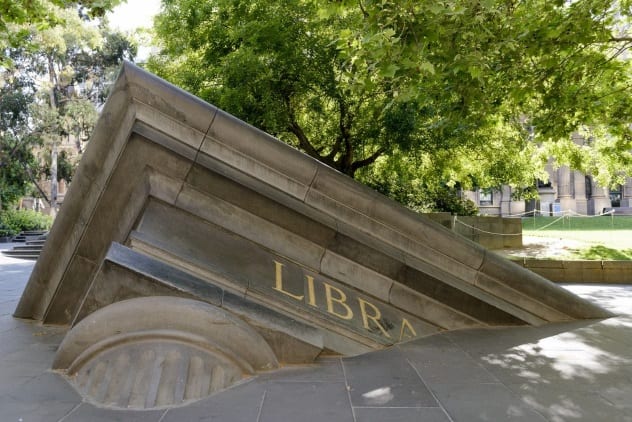 Outside the State Library of Victoria, you might be surprised to see what looks like a remnant of an ancient library sinking back into the ground. Constructed from Port Fairy Bluestone, the structure is 7 meters (23 ft) wide.

Created by Petrus Spronk, the piece, named Architectural Fragment, is one of several sunken pieces the artist has installed around the world and is meant to symbolize the fragile and transient nature of all that is human, which is pretty disturbing.

However, the piece is like one of those “glass is half-full” moments. You can see the sinking of the library as the destruction of civilization and the disappearance of knowledge. Or maybe it is a new civilization breaking through the barriers surrounding the old, bringing forward new vistas of learning and hope.[10]

So, you know, you pays yer money, and you takes yer choice.

Read about more bizarre monuments around the world on 10 Unusual Statues And Monuments From Around The World and 10 Weird And Wonderful Animal Monuments.